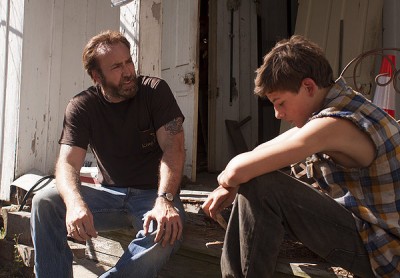 Joe is one of those films that should make us all mad at Nicholas Cage. The running gag that he makes terrible choices to star in worse and worse movies needs to end. Complex indie dramas like this one should be more dominant on his resume, because Joe reminds us all just how good of an actor Cage can be.

Joe is a middle-aged man getting by in the American South. He runs a crew that goes out into the woods and poisons trees so that lumber companies can plant new product. The law says they can't get rid of the old growth if the trees are healthy. These men exploit that loophole. As crappy jobs go, this one sounds pretty bad. Joe is an ecological assassin.

He's also an alcoholic who has done some jail time and wrestles with anger management issues. When Gary (Tye Sheridan, The Tree of Life), a 15-year-old drifter, shows up on the job site looking to earn a wage and feed his family, Joe sees a little bit of himself in the boy. Gary's old man (Gary Poulter) is an alcoholic and a violent customer himself. He resents his son for being the breadwinner, and he resents Joe for taking the kid under his wing. The trio is essentially three sides of the same coin. If Gary is what Joe once was, the father is who he could turn out to be.

As their lives intersect, Joe gives us a broader picture of the world in which they live. Theirs is harsh country, full of fundamentally good people who sometimes end up doing bad things out of self-preservation. Having more than one gun on hand, usually a rifle and a handgun, and an especially mean guard dog is not uncommon, sometimes if only because that other guy over there has the same thing. It's an environment that director David Gordon Green knows well, from back in the day before he joined the Judd Apatow camp, both for the good (Pineapple Express) and the bad (Your Highness). Joe is like a melding of his first and third features, George Washington and the criminally forgotten Undertow. It's a coming-of-age story about fathers and sons and family betrayals.

The betrayals come because some of the people here aren't fundamentally good. Gary's dad has long lost any compassionate traits. Likewise, Joe has made a mortal enemy of Willie (Ronnie Gene Blevins, the actor destined to star in the Peter Sarsgaard biopic), a pedophile with a Napoleonic complex whom Joe has consistently put back in line. When Gary does the same to Willie, beating him up on a bridge in an effort to posture for his dad, the boy and his troubled mentor basically trade foes. Both Willie and Gary's pop would be more than happy to see either or both of them dead. 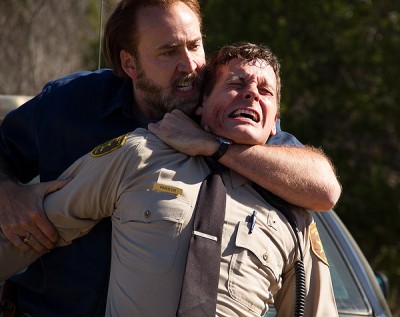 Green and cinematographer Tim Orr shoot Joe in the same gritty, of-the-moment manner as last year's Prince Avalanche, but with a tighter control, only occasionally allowing for the same improvisational whimsy that made that film a veritable verité hoot. (One presumes that Poulter brought his dancing skills to the set and Green worked them in; he had been a street performer prior to casting, and sadly died shortly after shooting wrapped.) The choice is a considered one: it keeps Joe mired in a dusty reality that lends a heartbreaking weight to its tragedies. The script by Gary Hawkins avoids turning the characters into the cartoonish cliché of Southerners that populates so many other movies. Hawkins based the screenplay on a novel by Larry Brown, the former Mississippi fireman turned author who was the subject of Hawkins' documentary The Rough South of Larry Brown. Outside of the obvious literary metaphor that crops up in the final scene, Joe is a gritty piece of work.

The film's most effective anchor is not the cinematic aesthetic, however, but Nicholas Cage. Joe provides him with an opportunity to once more put some soul into his work. While seeing the actor play drunk is nothing new (Leaving Las Vegas, anyone?), the older Cage brings a weighty gravitas to Joe that lends the performance an added level of emotion. There are still brief moments of craziness when Joe is close to losing it that hint at the performer's gonzo streak, and they work like a charm, almost like Joe is a sort of Incredible Hulk who will transform into freaky Nic Cage given the right stimulus. If you watch the movie with this in mind, Joe's redemption has the bonus of being Cage's redemption. "See how I can be when I don't turn it on?"

And it's part of Green's redemption, as well. After such mediocre efforts as The Sitter, it's nice to see him spending time doing the kind of thing he does best. While his apex is still the remarkable drama Snow Angels, Joe reminds us of how perceptive a filmmaker he can be when detailing the more brittle aspects of humanity. 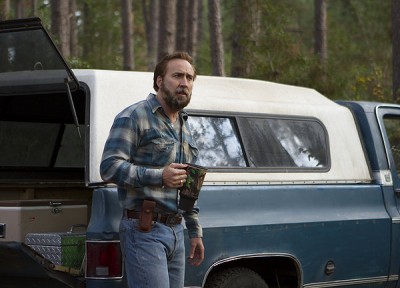