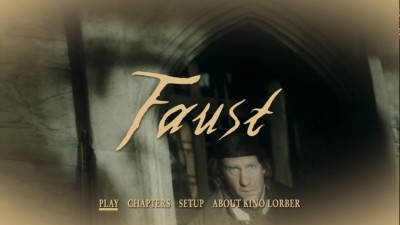 Revered Russian filmmaker Alexander Sokurov has been known to undertake the lives of iconic, difficult, and often evil men in his films. Earlier efforts include portraits of Hitler, Lenin, and Hirohito, for instance. For his 2011 motion picture, he takes on the legend of Faust, working the classic Goethe stageplay into an experimental, neo-psychedelic movie. It's intended to be the end of that particular cycle, going from those real-world leaders to a fictional character who likewise met his doom by being less concerned with "shoulda" than "coulda."

This Faust stars Johannes Zeiler as the titular doctor, a man who has rejected all earthly things in pursuit of knowledge. Sceptical of concepts like "God" and "the soul," he is instead intent on figuring out how the body works. His journey is derailed, however, when he tries to pawn a ring for some money and the devilish pawnbroker (Anton Adasinsky) insinuates himself into Faust's life. He takes Faust on a tour of the city, essentially showing him the kinds of experiences he's been missing, including women and drink. It's at a bar where Faust's companion provokes a man, and the violence ends with Faust accidentally stabbing him. Wracked with guilt, he goes to the dead man's family, only to fall in love with his lovely young sister Margarete (Isolda Dychauk). In pursuit of her, and needing to absolve himself of his crime, Faust finally makes his pact with his hellacious benefactor, selling ownership of his soul for the love of the girl. 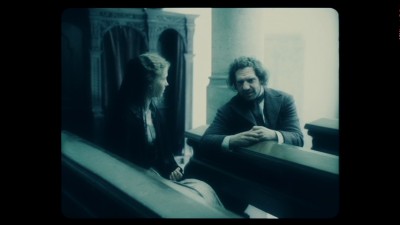 As straightforward as this all sounds, and as familiar as the legend may be, Sokurov's version is anything but straightforward or familiar. He opts for a desultory storytelling technique, letting characters flit about the screen as one segment rolls into the next, using non-sequiters and odd behavior as his glue. Cinematographer Bruno Delbonnel (Inside Llewyn Davis) shifts focus and color schemes to match the situation, sometimes punching in on an image and exaggerating proportions. Edges blur, figures distort, and the hues drain. It's audacious and often quite bold, and the actors commit to the craziness with relish. Zeiler is an offensive boor, and Adasinsky is extremely creepy, even before Sokurov shows him stripped of his clothes and wearing a grotesque body suit. The few special effects employed here use old-style techniques to unnerve the audience. The twitching baby homunculus gasping for breath is not something I will soon forget.

And yet, Faust failed to cast its spell on me. I was never as enthralled with the bizarre happenings as I should have been, and I was even less invested in the flat, one-note characters. I have enjoyed Sokurov's movies in the past, particularly Russian Ark and Alexandra, and usually can appreciate his off-kilter rhythms and admire his ambition. While I don't feel he was overly indulgent or lacked control of his narrative here, as the intentionally weird sometimes do, there still seemed times where it was all too much, as if he were more concerned with making sure everything was warped than he was with whether or not it was going to come off. I suppose that's the nature of experimental art, though: let it happen as it may, and let the rest of us sort it out.

Faust certainly comes to DVD with much acclaim to back it up. It won the Golden Lion at the Venice International Film Festival and earned quite a lot of praise from other critics. I guess it just didn't work for me. As ever, these things are subjective, so your mileage may vary. 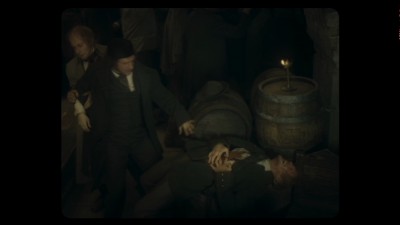 Video:
Faust is shown at a 1.37:1 aspect ratio, with quaintly rounded corners to give it an old-fashioned look. The picture does not appear to be anamorphic, rather the black on either side is part of the disc image. Resolution is very good, however, with the digital processing of the original photography apparent in a fashion that is likely true for how Sokurov and Delbonnel intended. Color is well rendered, shifting as the scene requires, looking washed out and saturated in some scenes, more vibrant in others. There is no damage to the print.

Sound:
The German soundtrack has been mixed in Dolby, either 5.1 or 2.0 depending on your pleasure. The 5.1 mix doesn't have a lot of subtle effects, but it does have a full sound that works nicely to envelope the room.

The removable English subtitles are easy to read, though they sometimes meet the edge of the image and even go beyond it, which can be disconcerting.

FINAL THOUGHTS:
Rent It. Though clearly ambitious, Alexander Sokurov's Faust left me feeling conflicted. I was overwhelmed by its technique, underwhelmed by what it actually had to say. This arty adaptation of Goethe's manuscript takes the title doctor on a warped journey, putting him through moral tests before the devil finally entices him to sell his soul. By the end, though, I didn't think much of the man, his soul, or the devil, they all seemed to be much ado about nothing. Perhaps that was the point, but at nearly 2-and-a-half hours, that's a lot of nothing to suffer. 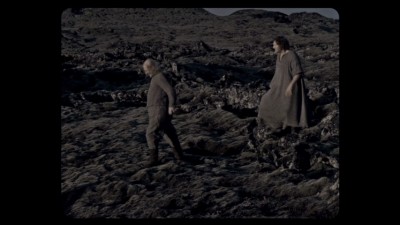