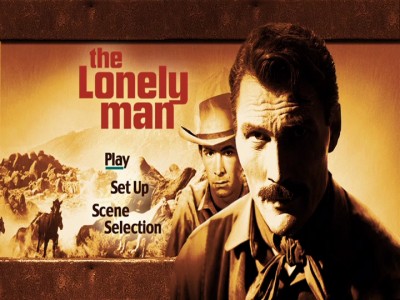 Henry Levin's 1956 western The Lonely Man is a lost treasure of the prairie. This surprising, emotional cowboy drama stars Jack Palance as the feared gunman Jacob Wade, a mean customer who returns home after years on the run to discover his wife is dead and his son a sensitive child full of hate for the old man who ditched him. Anthony Perkins, a few years away from exploring his mommy issues in Psycho, tackles his daddy issues playing Riley, the isolated child of a killer. He reluctantly packs up his resentment and goes on the road with Wade, who has promised him a new life.

This proves easier said than done. With Wade's reputation, any town they visit runs them off before they can settle. With no options left, the pair goes back to the wild horse ranch that Wade abandoned to go look for Riley. (Leaving stuff behind seems to be a running theme in Wade's life.) Running the place is Wade's last lover, a piano player from the nearby saloon (Elaine Aiken). Talking to her, Riley starts to get his first hints that maybe he doesn't know everything about his father. Wade would rather make him into a man than set him straight about the past, but the truth will out. Just hopefully before the outlaws looking for revenge come knocking. Wade put a bullet in King (Neville Brand), and King is looking to give it back. He and his compadre Faro (Lee Van Cleef) have cooked up an ambush scheme they think is going to be a sure thing.

Levin (Where the Boys Are) directs from a script by Harry Essex (Creature from the Black Lagoon) and Robert Smith (Sudden Fear). The Lonely Man was shot by cinematographer Lionel Lincoln (The Manchurian Candidate). He makes the most of the California hills, shooting them in black-and-white and widescreen to transform them into the American heartland. A couple of big action sequences use the rocky divides for some pretty exciting chases as the Wades try to round up wild mustangs. As with many great westerns, the expansive natural locales are juxtaposed nicely with the cramped towns men have plopped down in the middle of them. It's just such a place where Wade will have his showdown with King. It's an extended shootout that, of course, doesn't go as the bad guys expected--especially since they didn't factor for Wade not being on his own. 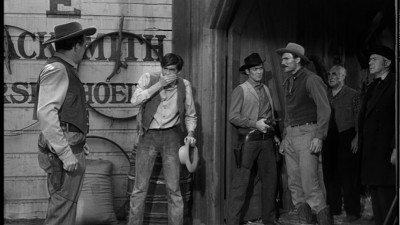 Which is really the main draw of The Lonely Man, the evolving relationship and reconciliation of father and son. Perkins gives a solid performance, playing to the very strengths that would eventually see him typecast as the nervous, off-center weirdo. He's good at it, but the boy is no match for the man. Palance is a powerhouse as Wade. With his chiseled tough-guy features and soulful eyes, he gives a special depth to the hard-assed old cowboy. It's a performance equal to many a portrayal of aging shootists to come, be it from Wayne or Eastwood. I don't know that Palance did it first, but he certainly set a standard. (And despite not even yet being 40!)

The emotional stuff is extremely satisfying, particularly since Levin doesn't pack a ton of information in just before the climax. The change is gradual, and both father and son get a special scene where they can show they have grown and earn each other's respect. The Oedipal stuff between Perkins and Aiken is underdeveloped, but it hardly matters. The Lonely Man is tight and efficient at 87 minutes, with nary a hair out of place. A true underdog and a stunner. 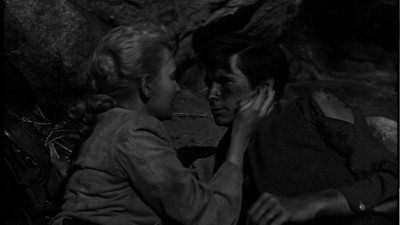 Video:
Warner Archives releases The Lonely man in its original 1.85:1 aspect ratio. The widescreen presentation is decent, with a nice contrast between dark and light. The print is free of damage, though at times the resolution does appear a tad bit soft.

Audio:
The mono soundtrack sounds very good, with nice tones and no distortion.

There is also an alternate French soundtrack, as well as English subtitles.

FINAL THOUGHTS:
Highly Recommended. Henry Levin's The Lonely Man is a surprisingly emotional western, focusing on the broken relationship between a father and son. Jack Palance shines as the grizzled old gunslinger returning to the boy he abandoned (Anthony Perkins) to try to make a man out of him. The story balances the everyday life of a wild mustang tamer with a revenge plot and a healthy dose of adolescent angst. The script is sharp and gets a lot done in a short time, and Levin handles both the action and the heartache with equal skill. 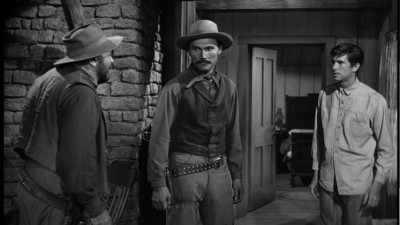