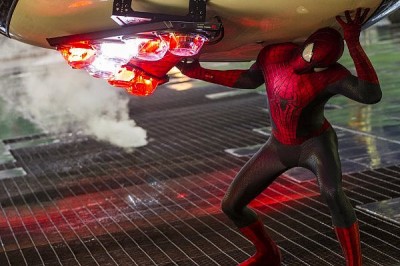 As I sit and ponder what to write about The Amazing Spider-Man 2, I'm frustrated to realize that the only thing I actually liked about the movie, the only effective moment in the entire 142-minute running time, is the one thing I positively can't tell you. It's the emotional climax of the sequel, and while it may have played on my fanboy nostalgia, it did elicit the intended reaction from me.

Which sucks, because nothing else in this movie really had what I would presume is the desired effect, and so I'm at a loss when it comes to being able to say anything nice. Which makes me wish I didn't have to say anything at all.

Andrew Garfield returns as Peter Parker in this second time around the web. He's joined by the affable Emma Stone as Gwen Stacey. And both are being bossed around by Marc Webb, who took over the franchise with the 2012 reboot. I was a big fan of The Amazing Spider-Man, I preferred it to the Sam Raimi trilogy, which I know most folks don't agree with me on. Trust me, though, when it comes to The Amazing Spider-Man 2, we're going to be on the same page.

My only real objection to The Amazing Spider-Man was that the world didn't really need another origin of ol' webhead. With that out of the way, one would have hoped the follow-up could just get on with telling a good story. It does anything but. In fact, the sequel, written by the Star Trek team of Alex Kurtzman and Roberto Orci and Jeff Pikner, a regular writer on both Lost and Fringe, dashes those hopes from the get-go by opening with an extended flashback to the night Peter Parker's parents went on the run. History plays a big part in The Amazing Spider-Man 2, and so does family, and both lend Webb an excuse to go back over and over old ground.

The general plot involves two major villains in the Spider-Man canon. Jamie Foxx takes point as Electro, a bad guy with electricity-based powers, here remolded as an obsessed fan of Spidey's who gets his special abilities by falling into a vat full of mutated electric eels. With his bald head and blue skin, this Electro is going to draw a lot of comparisons to Arnold Schwarzenegger as Mr. Freeze. As harsh as that seems, it's deserved. But more on that later. 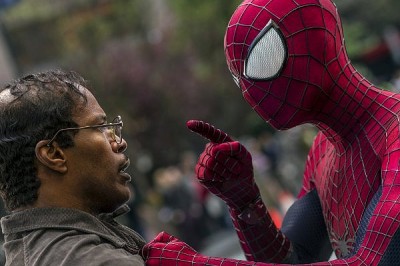 In the midst of Electro's transformation, Peter and Gwen are having love problems. Also, Peter's old friend Harry Osborne (Dane DeHaan, Chronicle) has returned to town to visit his father (Chris Cooper) on his deathbed and be told he has a rare genetic disease. Harry believes Spider-Man's blood will cure him, and his misguided attempts to replicate the experiments that led to the webslinger getting his powers will backfire, turning Harry into the Green Goblin. He teams up with Electro, providing for two separate slugfests in the movie's final act. Oh, and there's also a set-up for Paul Giametti to play the Rhino in future sequels, and Felicity Jones (Like Crazy) just might be the Black Cat.

The structure of the movie is soap opera for about 30 minutes, a fight for 10, more soap opera for about 80, then 30 minutes of mayhem and histrionics, then 10 minutes of clean-up. Peter solves the mystery of his father's secret work. Denis Leary's ghost pops up at opportune moments. Aunt May (Sally Field) cries. Andrew Garfiled pushes the awkward emo thing to the breaking point. Emma Stone is squandered as the pluckiest superhero girlfriend in the genre. And that's about it.

As if that weren't enough. The Amazing Spider-Man 2 is the franchise's equivalent of Batman & Robin. It's overdone and bloated, with too much of everything except internal logic. The action is bigger and the violence more destructive, the jokes more feverishly delivered, and the interpersonal drama exaggerated to the point of being comical. It's a vague approximation of some half-remembered cliché of what comic books are supposed to be like--as much Ratner as it is Schumacher. The way Webb and his writers rely on coincidence and convenience to make their story move borders on insulting, and most of the high moments of heroism are manipulative and false. It's actually sort of astounding how badly they've all blown it. The special effects seem half-assed, with rubbery superbeings decking each other on video game landscapes. Hell, even the music choices make no sense. Peter Parker has Velvet Underground posters on the wall, and the goddamned Neighbourhood on his iPod. 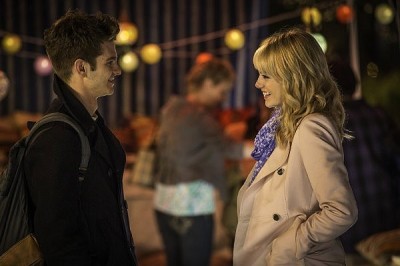 One can only guess at where the finger should be pointed. Where did it all go wrong? As storytelling, The Amazing Spider-Man 2 feels rushed. A few more rewrites, a ruthless edit--maybe these things should have been more important than making a pre-chosen release date. There is also the conceit of success. Everything about this movie stinks of overconfidence. Even most of the actors appear self-satisfied. (You will believe Jamie Foxx's ego can power all of New York!) It's the sequel disease: just keep piling on more of the things everyone liked the first time around until they don't like those things anymore. (Scarily enough, looking back at the Spider-Man 3 review I linked to above, my complaints about this sequel are almost exactly the same as my complaints about that one, even down to my wishing I could spend my time doing something other than writing this article; history tends to repeat, don't it?)

Speaking of that, there has been a small X-Men: Days of Future Past clip inserted into the end credits of the print being shown overseas. The version I saw didn't have it, but you may want to keep your eyes peeled just in case if you care about such things. 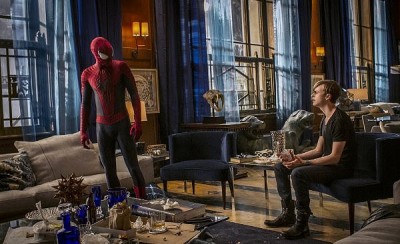