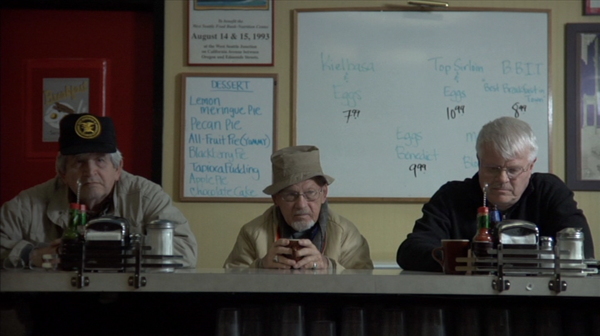 Old Goats is the kind of film you want to excitedly laud as an attempt to create something off the beaten path of typical moviemaking, but whose mixed-bag results make it hard to whole-heartedly recommend. This debut feature from writer-director Taylor Guterson (son of Snow Falling on Cedars novelist David Guterson) focuses on the growing friendship of a trio of grey-haired men living in Washington State. Utilizing a cast of non-actors, Guterson successfully spotlights the undiminished spark of these old fogies while capturing the specific regional flavor of his setting. The major drawback to this approach is that his non-actors are frequently great at being present in a scene, but they are just as frequently not great at delivering scripted lines naturally. Guterson does make it easy on his cast, though, by having the three main actors play themselves. While the details of their lives have been fudged a bit for dramatic purposes, the leads' easy rapport seems like the kind of thing one can't truly script.

Dave (David VanderWal) has been gently forced into retirement, and he finds himself with lots of free time. He starts going to social activities for old dudes, where he meets Bob (Bob Burkholder) and Britt (Britt Crosley). Bob is an ornery spitfire and ladies' man. Britt, meanwhile, is a shy ex-fisherman who has lived alone in a cramped and junky little boat for the past three decades or so. While Dave's wife Crystal (Gail Shackel) wants the new retiree to focus on buying a Palm Springs getaway for the two of them to live out their golden years, Dave would rather just hang out with his new dude crew and get into old-guy mischief. Guterson's script insinuates that Dave is fairly well-off, and that Crystal's frustrations could be coming from Dave's new desire to "go slumming," but frustratingly, the script never fully addresses those tensions dramatically.

While Dave has his little post-retirement crises and Bob come to grips with whether or not he has lived a good life as he finishes his memoir, the main dramatic meat of the film relates to Britt's situation. After flirting with the idea of sailing to Hawaii solo and then coming to his senses, Britt is forced to confront his loneliness. He is prodded by Dave and Bob to get a cell phone and a laptop, and then starts internet dating. He finds a nice woman named Cynthia (Benita Staadecker), who wants to help turn his life around. But like his buddies, Britt is fairly set in his ways, so Cynthia has her work cut out for her.

The plot, however, is basically secondary; it's just there to keep Old Goats from feeling totally shapeless. One gets the feeling that Guterson just really enjoys hanging out with these lead actors and needed to find a structure to do it within. This means that the film can try a viewer's patience in the early going, but if you manage to stick around through the first half-hour or so, Old Goats finds its rhythm and becomes quite charming. 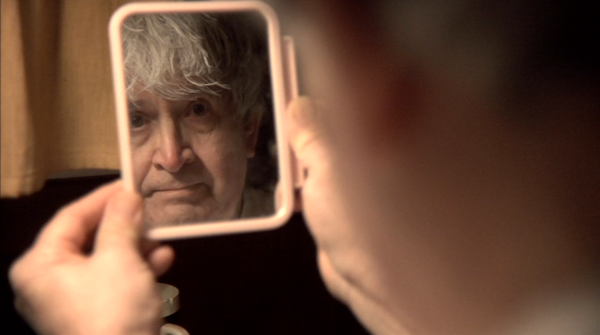 The Video:
The 1.78:1 anamorphic widescreen image is quite good, considering the way it was shot. It's hard to know exactly for sure, but it looks like it was shot using high-end standard-def equipment. The image is clean, but not eye-poppingly sharp. Typically, the colors are pleasantly saturated and the blacks are strong, although in some scenes, it looks like the contrast has been messed with for one reason or another, giving those scenes a slightly washed-out or foggy look.

The Audio:
Old Goats comes with both a Dolby 5.1 surround mix and a Dolby 2.0 stereo mix. As befits a low-key movie, the 5.1 track is not remarkably better than the 2.0, although the music cues are certainly given a more impressive presentation in the surround setting. Both tracks are cleanly recorded and mixed. The disc also offers an English SDH track, but be wary: I watched a stretch of the film with these subtitles, and I noticed a few odd transcription errors and certain subtitles that didn't stay on the screen long enough to be read.

Special Features:
The special features menu has a play-all button, or each bonus can be watched separately.

Final Thoughts:
Old Goats is not a great movie, but it is pleasant and enjoyable. Its low-key style and real-life characters give it an offbeat charm that should attract folks looking for something they don't usually get to see in movies. As far as an official suggestion goes, this one basically resides right on the border between Rent It and Recommended, but the film's warmth and generous spirit puts it over the top. Recommended. 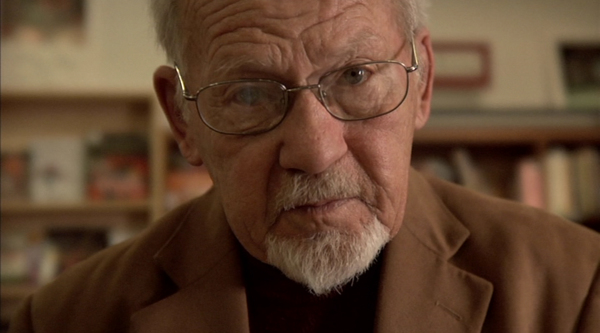