Actor John Slattery, perhaps best know for playing playboy Roger Sterling on Mad Men, makes his full transition to working behind the camera. Though he's directed episodes of the AMC series, God's Pocket is his first feature-length film. He serves as both director and co-writer, collaborating on the screenplay with Alex Metcalf (An American Affair), adapting a decades-old novel by Peter Dexter (Rush, The Paperboy). Slattery also produces. What he does not do in God's Pocket is act.

Instead, Slattery leaves that to an incredible cast of veteran character actors, led by John Turturro, Richard Jenkins, and the late Philip Seymour Hoffman. Turturro and Hoffman play Arthur and Mickey, small-time hoods in the Philadelphia borough that lends the film its name. The story is set in the late 1970s. The neighborhood is not just isolated, but isolationist. Mickey isn't originally from there, a fact that the natural-born locals remind him of practically hourly. They use their origins to excuse their own quirks and bad behavior, telling him he wouldn't understand, he's not one of them.

Mickey has married into the community. His wife Jeanie (Christina Hendricks) is a God's Pocket girl. She has a son by a previous marriage, Leon (Caleb Landry Jones, X-Men: First Class), a creepy little turd with a big mouth. His bragging about killing cats and unchecked racism earns him a metal pipe to the back of the head and a slab in the morgue. His co-workers frame his death as a workplace accident, an explanation Leon's mother doesn't buy. Jeanie charges Mickey with finding out more, and Arthur asks the local crime boss (Domenick Lombardozzi, The Wire) to send a couple toughs to get some answers. A respected newspaper columnist past his prime (Jenkins) also picks up the story, not to mention an infatuation with the dead boy's mother.

It's an intricate hornet's nest the murder has upended. Because, of course, even as all the business surrounding Leon's death carries on, so must the rest of life. Arthur is in debt to the boss, leaving Mickey strapped for cash and unable to pay the prick of a funeral director (Eddie Marsan, Happy-Go-Lucky) for Leon's burial. The kindest way to phrase it is that Mickey is in the middle of a bad luck streak that he can't get out of, and every attempt to do so only makes it worse. 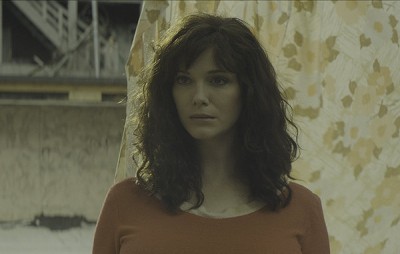 As you can see, there's a lot going on in God's Pocket, and Slattery does his best to wrangle it all. He succeeds in a lot of ways. His filmmaking style hearkens back to the period the film is set in, a time where unwieldy casts and harsh inner city dramas were not uncommon. There's some of Scorsese's verve, a little of Cimino's hazy ambition, and perhaps some of Rafelson's working-class humanity. The film was shot by Lance Acord, who is a long way from the dreamy interiors of the films he made with Sofia Coppola (Lost in Translation, Marie Antoinette). Acord adapts well to the grimy streets of this insular, rundown community. The color scheme here is brown and beige and more brown, with the occasional yellow just to show us who the stooge is. Hendricks appears as a lone beacon of color, though even her dresses--and, indeed, her trademark hair--are a deeper red, more like blood than a fire engine. She is a marvelous presence throughout God's Pocket. Her Mad Men co-star doesn't trade on the image TV fans have of the actress, instead calling on her to be more grounded, more introspective, and thus all the more forceful. In subduing her flaming hair, he also subdues her personality in a way, allowing her to show how much she can do with less. Hendricks is a leading lady in need of more roles. No more best friend in a rom-com or damsel in distress parts for her, please.

In fact, Slattery's best skill is probably understanding what his fellow actors are capable of. Hoffman's noble shlubbiness, Turturro's hangdog braggadocio, Jenkins' broken confidence--all three men give exceptional performances, finding new ways to turn the wheels in their particular wheelhouses. The cast and their director have a keen sense for the weary comedy at the center of this dark story. The earnest way in which these people continually stand up to their own cruel fates can be both hilarious and sad.

One gets the sense, however, that even though Slattery understood the bits and pieces, he couldn't really get a handle on how to put them all together. God's Pocket never fully gels, and its intersecting lines cross without forming a complete pattern. Which doesn't make the movie bad, necessarily, but instead it just feels like it's lacking that ineffable something to make God's Pocket stand apart. Even so, for a first-timer cutting his teeth, that Slattery is this interesting in getting it almost right is commendable. I'm eager to see what he does next.