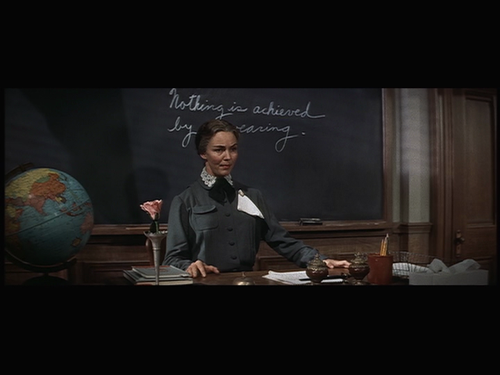 From Goodbye, Mr. Chips to Cheers for Miss Bishop, I'm a sucker for a good old "inspirational teacher" movie. 1955's tear-jerking Good Morning, Miss Dove proudly stands among those greats - even if it stars Jennifer Jones, who counts as one of filmdom's most brittle leading ladies. Her icy countenance actually works in this film's favor, however, and the intelligently written story knows how to push the right buttons without getting too treacly. The film arrives on disc as part of Fox's Cinema Archives series of made-to-order DVD reissues of vintage flicks from their library.

Good Morning, Miss Dove takes on a busy, flashback-filled structure to reveal everything about Miss Dove - sensible school teacher and longtime resident in the New England town of Liberty Hill - and the reasons why this dour, humorless old woman is so beloved with the locals. At the age of 55, Miss Dove has been a fixture at the local elementary school nearly as long as she's been alive, yet a debilitating injury forces her to leave teaching behind and take stock of her life. In the process, she learns that she's had a personal, positive connection with seemingly everyone in Liberty Hill - from the doctor (Robert Stack) who first notices she's in pain to the chatty blonde nurse (Peggy Knudsen) stationed in her room. We learn that she started teaching at Liberty Heights to pay off the massive debts left by her late father to his banking business associate (Robert Douglas), spurning the attentions of an ardent suitor (Marshall Thompson) to dedicate herself to the job. When word of Miss Dove's hospitalization gets around, dozens of her former students come by - the local traffic cop (Chuck Connors) who emerged from a squalid childhood through Dove's guidance; a successful playwright (Jerry Paris) whom Dove taught to speak English in her downtime; the doctor's wife (Kipp Hamilton) who got advised out of a bad relationship; the esteemed reverend (Biff Elliot) who had his life turned around by Miss Dove - and several others who are currently having their kids taught by her. Diagnosed with a malignant tumor on her spine, Stack's Dr. Baker personally oversees her delicate surgery as the entire town of Liberty Hill anxiously awaits the outcome.

With good, warm-hearted performances and a script insightful on small town life and the unnoticed impacts people have on each other, Good Morning, Miss Dove ends up being an engaging and surprisingly non-manipulative watch. Jennifer Jones' offbeat, mannered acting takes some getting used to, but eventually she conveys the shadings of this complex woman pretty well. Jones idea of projecting Miss Dove's strict, no-nonsense personality is speaking with a dry, almost robotic voice lacking in cadence, although she makes her appear a little more impetuous in the earliest flashbacks. While I can't think of too many actresses from that time who could have handled this complex role more strongly, in the end Jones emerges just fine. The weaknesses in the performance are buffeted by the film's solid direction from Henry Koster (who helmed films as diverse as Harvey and The Robe), that noble screenplay, and a bunch of capable supporting players (especially the overlooked Peggy Knudsen, funny and heartbreaking as the nurse). The coldness of CinemaScope photography slightly robs the story of its intimacy, but for sheer entertainment this gets an easy grade of "B plus."

Now, for your homework assignment: watch Good Morning, Miss Dove alongside 1951's The Browning Version, the searing portrait of a conceited, un-loved teacher, for an interesting case of compare-and-contrast. 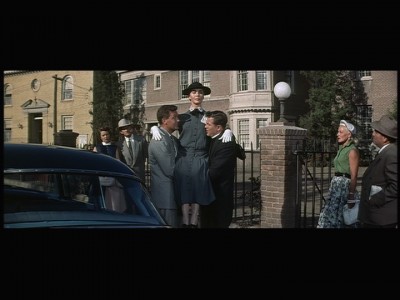 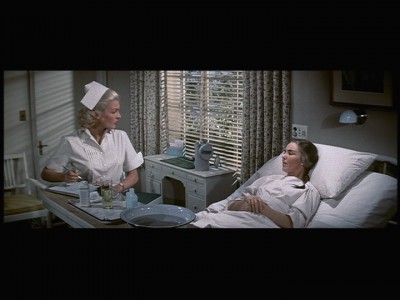 Fox's Cinema Archives DVD edition of Good Morning, Miss Dove showcases the film letterboxed in 4:3 format, but at least the print looks nice and it's not a cruelly cropped pan-and-scan job. The color seems slightly less saturated than it ought to be, yet the print itself is in great shape with little in the way of scratches and dirt.

With awkwardly sandwiched-in music and overdubbed dialogue aplenty, Miss Dove is far from a prime example of sonically superior cinema, but the soundtrack is a decent listen with little in the way of noticeable flaws. While it gets a little hissy at times, dialogue is clear and pleasant. No subtitles are included.

None. As with other Fox Cinema Archives discs, the disc sports a simple menu and chapter stops every ten minutes in the film.

As a cool-tempered spinster schoolteacher who doesn't realize the profound impact she's had on her community, Jennifer Jones is oddly mannered yet ultimately triumphant in 1955's Good Morning, Dove. Fox's m.o.d. release of the film lacks a nice anamorphic widescreen transfer, but fans of the hale and hearty Inspirational Teacher genre will be touches by this lovingly crafted story. Class dismissed. Recommended. 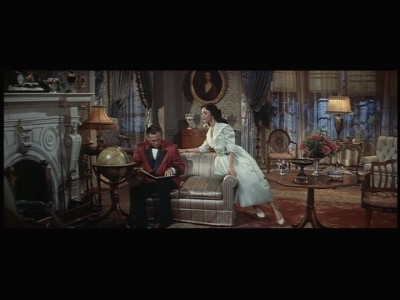 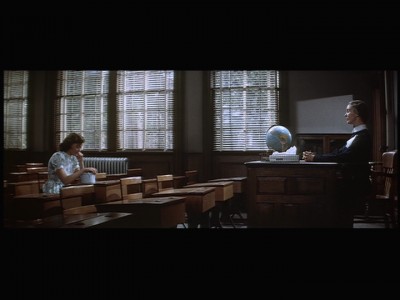