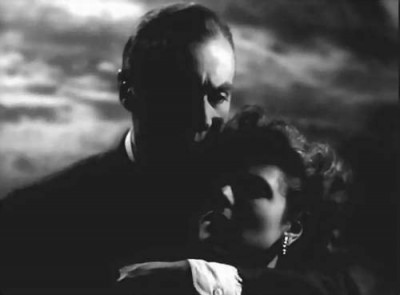 It's Paris just prior to World War II. The Nazis have already taken over Germany, and the fascists have Italy; meanwhile, both throw their support to crush freedom in Franco's Spain. This strife has caused refugees from all over Europe to seek safe haven in countries that remain outside of their sphere of influence, even though they have yet to declare any direct opposition against Hitler or Mussolini. This melting pot of fear and uncertainty is the setting of Arch of Triumph, a 1948 drama from director Lewis Milestone (the original Ocean's Eleven) and writer Harry Brown (Wake of the Red Witch), working from a book by Erich Maria Remarque (whose All Quiet on the Western Front Milestone had adapted in 1930).

Arch of Triumph follows one Dr. Ravic (Charles Boyer, The Earrings of Madame De....) as a German ex-pat who narrowly escaped from the Nazis following torture and imprisonment. Ravic is haunted by his incarceration, and the memory of a woman who died rather than rat him out. His persecutor (Charles Laughton, Island of Lost Souls) has appeared in Paris, and Ravic bides his time, plotting how he can exact his revenge.

In this waiting period, the doctor, who is practicing medicine illegally in the country, helps out a woman he meets by chance. Joan Madou (Ingrid Bergman, Notorious) is an Italian of mixed descent who got out of her own country under mysterious circumstances, as well. The unexpected death of her lover and benefactor leaves her stranded. Though Ravic is cold to her at first, he eventually takes her under his care and they fall in love. Circumstances being what they are, however, they must constantly be looking over their shoulders lest their pasts catch up with them. Things go well for a time, but when Ravic calls attention to himself by publicly helping an accident victim, he is deported. In the time it takes him to cross back over the border, Joan takes up with a new lover.

As far as plots go, this is a pretty good one. High intrigue, forbidden passion, a race against time--too bad Milestone's approach is so self-serious and, dare I say, reverent--almost like Hollywood was afraid of the kind of two-fisted propaganda they had produced during the war, they had to now prove they understood the tragedy of it all. Arch of Triumph is, indeed, arch. Cheesy to say, sure, but it's also not much of a triumph. The chemistry between Bergman and Boyer is abysmal. Their scenes together come off as staged and phony, with each actor appearing to be seeking his or her mark, hitting the right beats, almost as if they were still in rehearsal when Milestone called action. Joan seems more excited by her relationships of convenience than she is in her genuine coupling with the German doc.

This is not helped by the film being overly long. Scenes go on forever, and Milestone shows little facility for building tension or fear. When Ravic does finally get his torturer alone, the viewer is several steps ahead, to the point that the righteous man appears to be a dullard and the villain's comeuppance offers little satisfaction. A judicious edit could have likely cranked up the heat, if not at least the fear, but a solid rewrite and some better casting is really required. Where are Gregory Peck or Cary Grant when you need them?

That said, there are a few things to recommend Arch of Triumph. Bergman on her own is fine. She has always done distraught well. We also get an excellent supporting performance from Louis Calhern (Executive Suite) as Ravic's Russian confidante. There is likewise some lovely photography courtesy of Russell Metty (That Touch of Mink), who manages to cobble together a reasonable illusion that we are actually in Paris.

Take a spin under the Arch of Triumph for those reasons, but there's not much else to see here 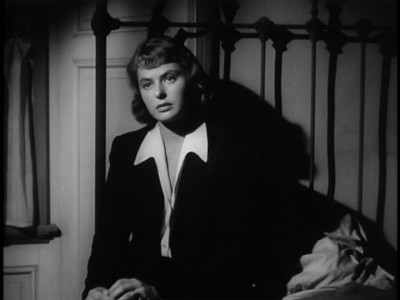 THE BLU-RAY The black-and-white transfer of Arch of Triumph, presented at a 1.37:1 aspect ratio in high-definition, is spotty. Though the image is largely intact and crisp, there is quite a lot of surface damage, particularly in early scenes. Frequent specks and blemishes appear--though, to be fair, there are also long stretches where no problems occur. Overall, it is an average transfer with no egregious neglect from the studio, more than likely an accurate representation of the source materials used.


Sound:
The mono soundtrack is nicely handled, if unremarkable. The audio is clean with no hiss, unintended sounds, or distortion.

By the by, anyone in charge of proofreading at Olive Films, the back of your box says this movie came out in 1958. Someone's finger slipped.

FINAL THOUGHTS:
Rent It. This 1948 war drama lacks both the danger and the passion necessary for a love story of this kind. Set in Paris just before World War II, Arch of Triumph stars Ingrid Bergman and Charles Boyer as two refugees on the run who find solace in one another, only to have it jeopardized by the same circumstances that brought them together. Lewis Milestone directs everything with the same gloomy perspective, creating a dour romance that goes on too long and never really gives audiences something to root for. 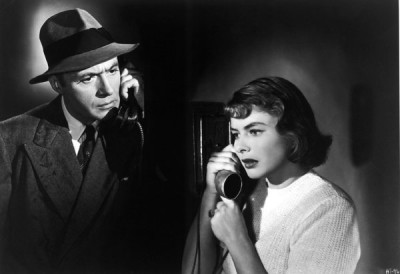