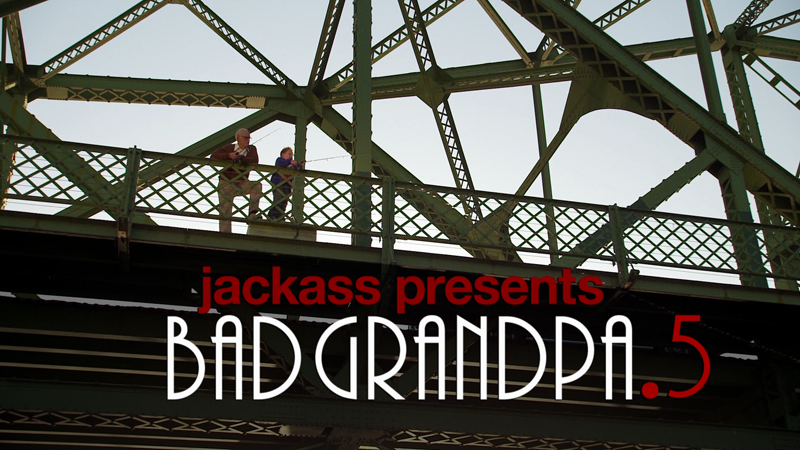 
The Movie
Like a rainbow after the rain or divorce after a Kardashian wedding, some things are just inevitable follow-ups. Thus is the case when it comes to a Jackass movie. After one comes out out in theaters and on home video, a repackaged version of outtakes, with insight from the cast and crew, will follow some time after, as a .5 release. The third entry in this trend is Bad Grandpa .5, which collects various leftovers from the making of the first narrative Jackass film, and weaves them around interviews with director Jeff Tremaine, actor Johnny Knoxville and producer Spike Jonze, among others. Yes, that would be Oscar-winner (and four-times nominated) Spike Jonze, who may be as big a star in this film as Knoxville.

Whereas the original Bad Grandpa told a road-trip story of 86-year-old Irving Zisman (Knoxville, under Oscar-nominated old-age makeup) and his grandson Billy (Jackson Nicoll), which was basically an excuse for a series of Jackass-brand pranks and stunts which garnered real reactions that powered the film, this new movie, like the .5 Jackass movies before, is about what didn't make it into the movie, as well as the production effort. The interviews, which include memories about bits they tried but didn't work in the movie and bits that just failed, as well as talk about some of the difficulties that were faced in making the movie, like how to hide cameras effectively and production confusion over continuity, lead into clips and behind-the-scenes footage. The segment on the cameras was particularly interesting, as it follows the progression of the crew's technology and ingenuity. 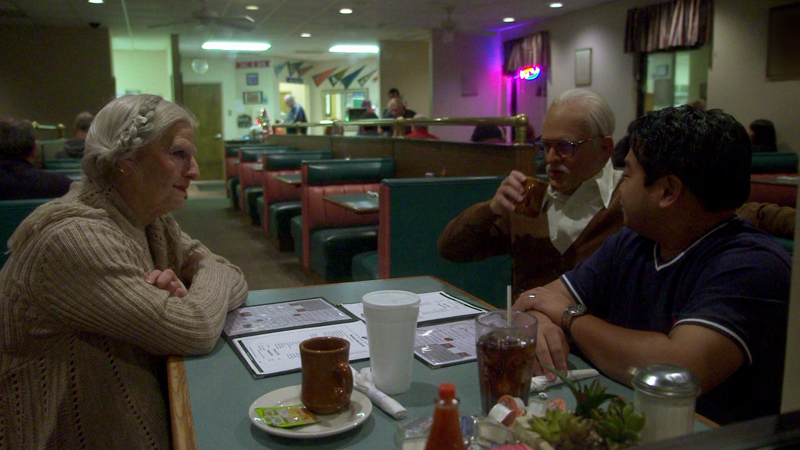 Some of the bits exclusive to .5 are very funny, like Zisman being chased through the streets by scantily-clad male strippers or a drunk Knoxville (in costume) talking to women at a bar. Not everything was genius though, like an erection device used during a dead-end scene at a casino, or the efforts to convince people to help Irving bury his wife (some of which actually were successful.) When you stack them up against the better stuff from the film (like an angry restaurant customer who berates Irving for hitting a giant penguin statue) which are covered in further detail in this feature, it becomes clear that the editing for the film movie was well-done. The behind-the-scenes info also just ends up being more interesting than the material from the cutting-room floor.

One of the more interesting parts of this film is the inclusion of two characters who were cut from the film, despite one being spotted in the end credits. One is Irving's girlfriend Gloria, played in drag old-age makeup by Jonze, the other being Irving's wife, played in old-age makeup by Jonze's Being John Malkovich star Catherine Keener. Based on the scenes in this film, which include Gloria spraying breast milk on Irving, meeting guys from Craigslist, and pranking sex therapists and healers, it's obvious that Jonze loves this kind of insanity, and his enthusiasm boosts the energy of the scenes, while his connection with Knoxville helps create moments, like one where they surreptitiously introduce the lyrics to Sir Mix-A-Lot's famous hit song. It's hard to figure out why Gloria wasn't integrated in some way with the original film.

Keener, on the other hand, was a relatively easy cut, as her character is limited to one scene, and she was neatly removed from the movie as such. Though game to play along, she just doesn't have that chemistry, or the experience at the hidden-camera game. But that's part of what makes these .5 films interesting, as they give more insight into how these movies are made. 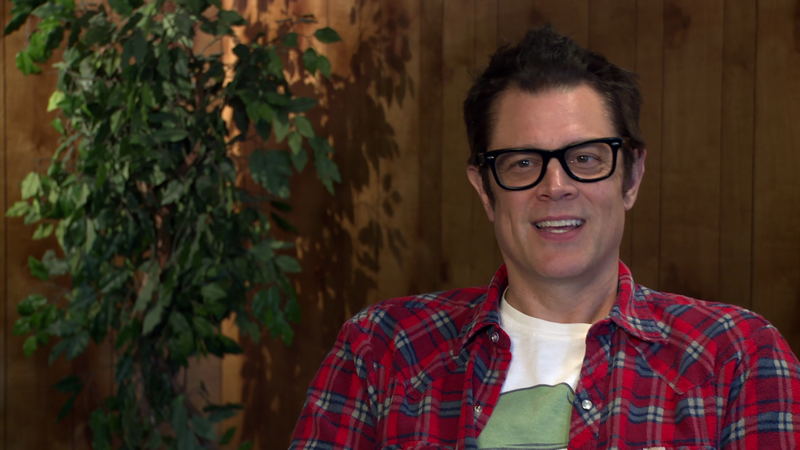 The Disc
This film arrives on a Blu-ray disc in a standard-width BR keepcase with a pointless slipcover that repeats the cover art. The Blu-ray features an animated menu, offering the option to watch the film, select chapters, adjust languages and check out the extras. Audio options include English DTS-HD Master Audio 5.1 and Audio Description 2.0 while English, English SDH, French and Spanish subtitles are available.

The Quality
The only reason this movie gets a better grade in terms of the visuals is because more of it was shot under controlled circumstances, thanks to the interviews included. Otherwise, it's basically the same as the first one, shot on hidden cameras, so you're not getting a sharp image no matter what camera you use, since lighting is basically impossible to control. The transfer is mostly soft, while the color falls short of vibrant and it's all full of noise. On the other hand, in the interviews, the 1080p, AVC-encoded transfer is smooth and colorful. There's no concern about digital distractions, but that's not really a big issue when looking at footage from a pinhole camera.

Just like with the video, the DTS-HD Master Audio 5.1 audio is basically two different tracks, with the interviews sounding crisp and clean, and the prank footage documentarian. Either way, voices are nicely legible in the center channel, while the music (and some effects) are enhanced by the surround channels. You're not going to find any dynamic mixing going on, while other than some bass in the music, the low-end is quiet. Overall, it's a solid presentation of a low-end product.

The Extras
The original Bad Grandpa had a decent spread of bonus content, and this new one follows that trend on a smaller scale, with more of what you see in .5. Up first is a "round table" interview with Knoxville, Tremaine and Jonze (12:26), in which they talk in slightly more detail about several of the topics discussed in the main feature, including the origins of the old men characters, the process of creating the film's story, the improvisational nature of Jackass and lengthy testicles. It's a light, friendly conversation, interrupted to try to fix the lighting.

A short bit called "Casting Billy" (3:16) talks about how Nicoll was brought on board, and looks at his love of "The Jackson 5" and gives a look at the screen test he did, to see how he would react to unscripted moments.

Eight deleted scenes are included, running a total of 11:28. These are scenes deleted from .5, not from the original movie, and include footage of a prank falling apart and Knoxville and Niccol pranking truckers over CB. The number eight is a bit inflated though, since three of them are Knoxville hitting things with his car. They are followed by almost 14 minutes of outtakes, a mix of screw-ups and goofing around, including Nicoll and Knoxville having fun, control room farts and a camera reveal, showing how a room was set up for shooting. There are some amusing moments here, but not as many as you'd hope for. 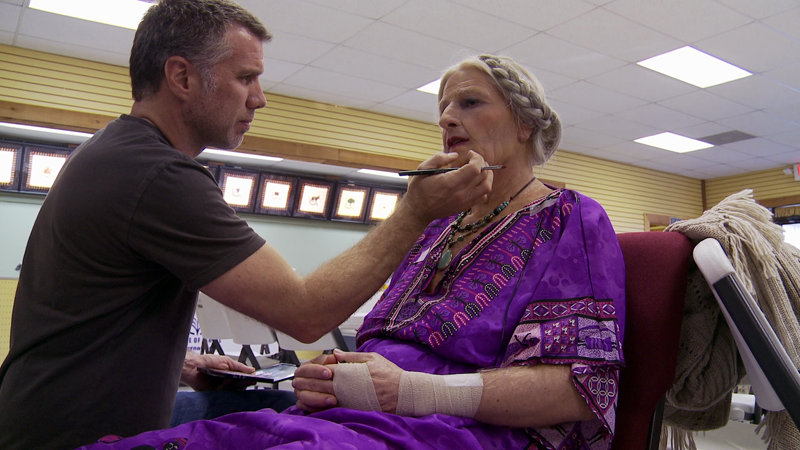 The Bottom Line
Considering the trend of .5 releases for the Jackass films, it was bound to happen with Bad Grandpa, and if you're a fan of the Jackass concept, this is the Bad Grandpa movie you want, with the stunts and pranks separated from the story attempted in the original film. Once again, Blu-ray might be overkill considering the quality of the source materials, while the bonus material is really just an extension of the brief main feature. Jackass fans who weren't satisfied by Bad Grandpa take on Knoxville and company's h-jinks might find Bad Grandpa .5 a more engaging experience.