My 8-year-old daughter adores My Little Pony: Friendship is Magic. She plays with the toys. she watches the show, she reads the books. Her understanding of the universe of the ponies is on another level from any pop-culture interest I've ever had. However, when she's enjoying the show, I have no problem sitting down and watching these adorable ponies and their wacky adventures alongside her. I wouldn't call myself a fan, but I have a definite appreciation for the art style used in the series and the clever writing, which pays tribute to plenty of sources to create entertaining adventures that speak to the kids and older viewers on different levels. As such, I get bronies.

When I first heard about A Brony Tale, I wondered what the deal was, because I had already seen Bronies: The Extremely Unexpected Adult Fans of My Little Pony, Laurent Malaquais' 2012 documentary on bronies, the mostly male, mostly adult alternate fanbase for the My Little Pony: Friendship is Magic cartoon series. Could there possibly be a need for two separate brony documentaries, especially when they are so similar in structure? 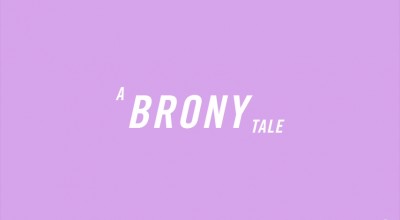 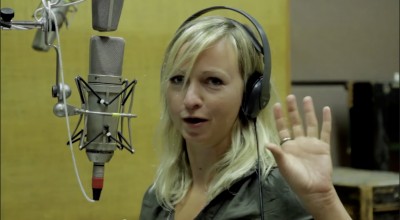 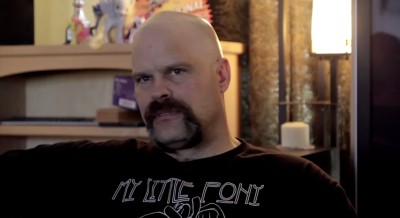 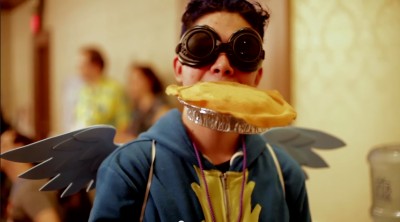 However, they are very different as well. Though Bronies boasts the involvement of several people from the show, including creator Lauren Frost, and features original pony animation and music, it's definitely a fan film (with its origins on Kickstarter) and there's a focus on the show's brony fans facing adversity in their fandom. A Brony Tale, directed by Canadian documentarian Brent Hodge, is more of a celebration of everything that's good about being a brony fan of Friendship is Magic, with Ball, despite her intimate involvement in the show, serving as an outsider exploring this culture, culminating in her visit to BronyCon, a large gathering of the faithful in New York City.

Though her overly-cautious approach to the world of bronies and the way plugs for her band Hey Ocean are inserted are a touch over the top, the film does a great job of showing the spectrum of bronies, from a motorcycle mechanic considered the manliest brony in the world to high-school geeks who formed their own brony club (with t-shirts and everything.) The various elements of the fandom are illustrated and discussed, from art to music to the importance of the phrase "20 percent cooler", with the research of a pair of psychologists serving as a framing device, establishing those interviewed as emblematic of certain parts of why people are bronies. The psychologists' explanation for such exuberant, widespread and non-ironic interest in a sunshiney "girls" cartoon about friendship makes complete sense, and should only serve to bring more into the MLP fold (and helps explain the cult of Community as well.)

While the more positive profiles are the biggest difference between the two films (A Brony Tale leaves bullying and other concerns mostly at the door, touching briefly on the perception of pedophilia amongst bronies and how MLP has helped some people in rough situations) the construction of the films is quite different as well, with A Brony Tale coming off slick and polished, with gorgeous, artsy camerawork, a stylish visual theme and fantastic music. It's such a well-made documentary, that it just pulls you along, introducing a number of interesting bronies, and spending just as much time as necessary before moving on. A Brony Tale is honestly short at just 78 minutes, but it achieves the strange oxymoronic feat of being loaded with info and story while being breezy and fast-paced (until the end, where a shift to a somewhat serious tone is a bit awkward, before diving back into the fun.) It's an enjoyable best-of of the world of bronies for those new and those experienced enough to have a cutie mark of their own.