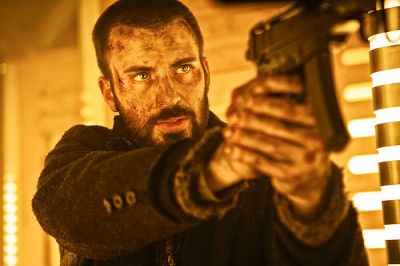 Delays in the American release of Snowpiercer means its cataclysmic science-fiction event will no longer have a chance of being prophetic, but no matter. Bong Joon-ho's English-language debut is still likely to take the crown as the most original, entertaining movie of the summer of 2014.

Snowpiercer takes place in a so-close-you-can-almost-see-it future where, following a disastrous attempt to curb global warning by introducing a cooling agent into the ecosystem in July 2014, the entire Earth froze completely. The only surviving humans climbed into a massive train mounted on a circular track. For the last eighteen years, they have rounded this path once every 365 days. In terms of social structure, life has carried on much as it has for centuries: the poor people are stuck in the back with very little to keep them going, whereas the rich live it up at the front of the train, convinced of their god-given rights as the chosen ones.

Living on protein bars gifted them by the train's benefactor while also wallowing in their own filth has started to take its toll on the people in the "tail." They are planning a revolt, led by the steely-eyed Curtis (Chris Evans, a.k.a Captain America) and spurred on by cryptic messages hidden in their food. Counseled by the one-armed, one-legged Gilliam (John Hurt, Only Lovers Left Alive, Alien) and backed up by the eager Edgar (Jamie Bell, currently starring in Turn on AMC), Curtis intends to lead his people to the front of the train. First, they must break past the guards and free the train's master of locks from prison. Nam (Song Kang-ho, Thirst, The Good, the Bad, the Weird) designed all the doors on Snowpiercer, but he has since become addicted to a drug that distorts time and causes hallucinations--just the sort of controlled substance that would kill a few hours for folks trapped on a looping train.

Naturally, the 1% up front don't want the stinky people from the back invading their paradise. Their mouthpiece is a Margaret Thatcher lookalike with the (possibly?) portentous name of Mason (Tilda Swinton, I Am Love). Her lip service is about as effective as her false teeth, however, and soon Curtis and company are pushing forward, rushing into danger, smashing heads and having their heads smashed all the same. 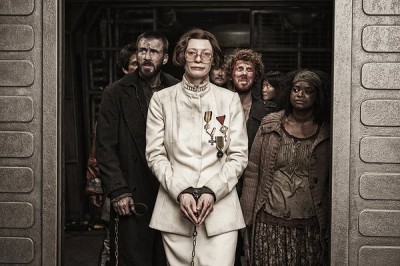 It's a violent charge, full of blood and carnage, and altogether enthralling. Joon-ho has based his movie, which he co-wrote with Kelly Masterson (Before the Devil Knows You're Dead), on a so-so French graphic novel from the 1980s. (Original series artist Jean-Marc Rochette contributes drawings that serve as props in the movie.) As in the comic book story, the thrust of the plot is that with each successive car, Curtis loses numbers and also encounters something different. One car is dedicated to harvesting plants, another is a school for the "train babies," children born since Snowpiercer fired up its engines. Stakes are raised, and Curtis begins to question the meaning of his mission and the price being paid. Some of the cars are whackier than others, some of the concepts harder to swallow, but each serves a purpose. As Swinton's Mason and later the man at the train's helm (Ed Harris, Pollock) point out, there is an order to things and everyone has their place and that's what keeps Snowpiercer running. It's also what keeps Snowpiercer running. Each sequence is connected to the last in a way that brings us ever closer to the end, creating a political allegory and a mind-altering action picture all powered by the same engine of insanity.

You have to love a vision this mad. Bong Joon-ho soars to great heights and drops some fantastic batshit from them. The ideas splatter onto the screen with tremendous vigor, though one never gets the sense that the weirdness is anything but fully considered. The South Korean director, who's perhaps best known on these shores for the monster movie The Host, is perfectly in control of this juggernaut, and the confidence with which he presents his tale makes it easy to go along. Unlike, say, his countryman Park Chan-wook, whose own English debut, Stoker, used its surreal shenanigans to keep the audience at arm's length, Joon-ho carries the viewer along with Curtis' daft charge, pausing only when it's necessary to catch one's breath and gather the living. 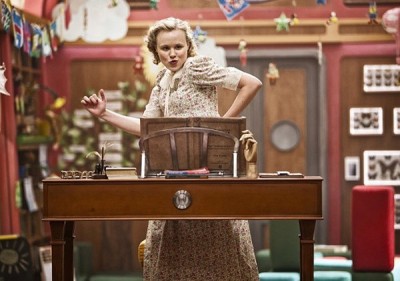 It doesn't hurt that the director has so smartly cast this thing, giving us a hero we already believe in and villains we can both laugh at and detest. That laughing really helps, actually. Though Snowpiercer is serious business, it's not taking itself so seriously that it doesn't allow us to imbibe in its absurdity. A marvelously nutty cameo by Alison Pill (Scott Pilgrim vs. the World) should dispel any naysayers keeping their arms crossed and daring Snowpiercer to go off the rails. The path is set, you bought your ticket, just take the ride!

I'm sure with future viewings I could dissect Snowpiercer in more detail--separate each train car, isolate the different episodes in the narrative, go over the deeper themes and concepts engineered into this thing--but for this first outing, it's just enough to enjoy the craziness. Like this summer's other great blockbuster, Edge of Tomorrow, the joy is in the discovery. Not knowing where they are going or how they're going to get out of the mess they create for themselves is what makes these movies such a blast. It's a shame that due to bad faith management from the Weinstein Company Snowpiercer is being relegated to smaller theaters and fewer markets. It's not even going to get the shot Edge of Tomorrow got. Then again, seeing how that fared, it likely wouldn't have mattered anyway. Sequels and reboots and playing it safe is starting to be all we, as an audience, seemingly deserve. Even so, hopefully adventurous filmgoers will seek Snowpiercer out and then tell a few friends and start a chain reaction and just maybe we can become the audience that such a creative endeavor was actually made for. 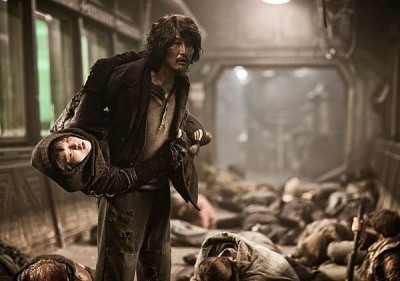