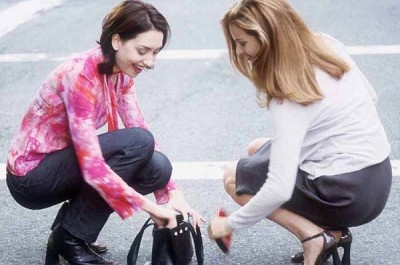 Though it came out in 2001, Kissing Jessica Stein seems to most strongly fit into the post-Swingers 1990s, when artists and performers outside of the Hollywood scene stopped waiting for someone to create a project that fit their particular quirks and skills and set out to make it themselves.

In this case, Jennifer Westfeldt (Friends with Kids) and Heather Juergensen wrote their own stage play, converted it into a screenplay, and gave themselves each lead roles. Westfeldt as Jessica, and Juergensen as Helen, two women who, fed up with the dating scene in New York City and its lack of quality men, opt to date the same sex for a change. One enters cautiously and with a bevy of neuroses, and the other jumps in with an adventurous determination. Helen will, at some point, manage to kiss Jessica Stein.

The end result, as directed by Charles Herman-Wurmfeld (The Hammer), is a genial, if somewhat dated, snapshot of a certain mindset at a certain time. Pre-9/11, hardly yet the 21st Century. A babyfaced Jon Hamm in clothes that don't quite fit shows not even Don Draper can escape the bad fashion choices of Y2K.

Hamm plays one of the many disastrous dates we see Jessica go on, though most others are wrapped up in a tidy montage that, as one of her exes (Scott Cohen) points out, neatly exhibits Jessica's many ridiculous reasons for dismissing men. Her need for finding the perfect match, the same way she seeks the perfect word in her job as a copyeditor at a newspaper, is Seinfeld-esque in its specificity--though not so exaggerated that there isn't likely a kernel of truth in these setups. The authors very likely dug into their own history for these mishaps and monstrosities. On the flip, Helen is a rowdy dater balancing three lovers at once: one for food, one for money, one for sex. It's the actual reverse to Jessica. Instead of banishing men for their one flaw, she gravitates to their one perfection.

Actually, if you'll allow a momentary digression, watching Kissing Jessica Stein I think I finally really began to understand what it's like for women to watch a male-centric movie like The Hangover or a variety of pretty-boy rom-coms where their half of the population is reduced to nothing but annoying stereotypes and potential sex buddies. Most of the male characters in Kissing Jessica Stein, including Helen's gay best friends, are under-developed punchlines. There was a brief moment when this first occurred to me when I was all, "Hey, wait a minute..." but that swiftly passed. Fair is fair. Good on you, Westfeldt and Juergensen. Us boys deserve it!

Because this is your show anyway. The ins and outs of Jessica and Helen's would-be relationship is the real focus of Kissing Jessica Stein. What can these two find together, and what do their stumbles and successes say about risk-taking and choosing your own identity and recognizing one's own needs. Because both actresses are good at what they do and comfortable in the roles they created for themselves, their back-and-forth is easy to watch. They are a romantic-comedy duo, Juergensen playing serious to Westfeldt's confused clown--though more of the Woody Allen-variety clown than say, Jerry Lewis. I liked both of them, which, in a rom-com world, is often enough to push a movie through.

That is not entirely the case for Kissing Jessica Stein, alas. Politics and a shallow engagement with the same get in the way a little. The film's bicuriosity, more than ten years on, comes off as quaint, and its disappointingly rushed ending kind of strips Kissing Jessica Stein of any of the potential progressiveness it might have otherwise achieved. There is a lot of work put into getting these two together, and then not much effort at all to tear them apart, much less any examination of what that might mean. The fact that everyone ends up happy and healthy anyway comes off as a compromise. The gays are treated nicely, the straights aren't rocked too hard, it's a movie everyone can enjoy! I'm not assigning malicious intent, I think the writers had their hearts in the right places; it's just that they ended up putting their characters' hearts in the wrong ones. 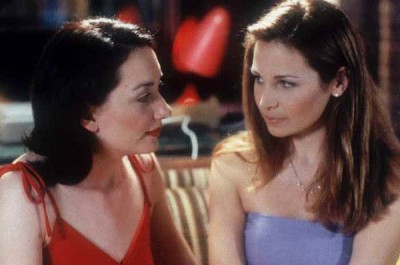 Video:
The 1080p widescreen transfer of Kissing Jessica Klein is of decent quality, though not exactly a knockout. The AVC-encoded image has well-rendered colors and is clean and free of blemish; it is, however, also a bit soft, with certain scenes looking overly muted. My guess is the studio treated this as a mid-list title and did the base amount of work on the upgrade. A dazzling high-def picture is not particularly crucial for a drama of this kind, and given Herman-Wurmfeld's bland direction there isn't really much that demands a more impressive presentation, but at the same time, I am sure bigger fans of the movie would rather the studio wasn't just coasting on this one. Like the movie itself, they don't go far enough to match up with current expectations.

Sound:
The 5.1 audio mix is slightly better, working with all the speakers where it can to create at least some atmosphere. There's not a lot of ambient noise to be had, but there is some nice work with exterior shots to give a sense of the environment. For a dialogue-heavy movie, though, the focus is appropriately on making sure that everything being said comes through clearly. In that, they succeed.

Extras:
Bonus features mirror the 2002 original DVD release exactly, which means two audio commentaries, one by the writers and stars, and the other by the director and his cinematographer. Westfeldt and Juergensen provide the more interesting exchange. They also add optional commentary to the seven deleted scenes.

Additionally, there is a making-of featurette that clocks in at just under 9 minutes, as well as the original theatrical trailer.

FINAL THOUGHTS:
A sweet and sometimes funny romantic comedy from the turn of the 21st century, Kissing Jessica Stein is a likable movie that, for its time, had a rather admirable goal: to look at two women trying to have a same-sex relationship as a healthy, viable option. Jennifer Westfeldt and Heather Juergensen both write and star in the movie, playing the would-be couple with humor and heart. Ultimately, though, Kissing Jessica Stein shows its age. It hedges its bets and even seems slightly naïve in hindsight. Not bad, by any means, but frozen in time. Rent It. 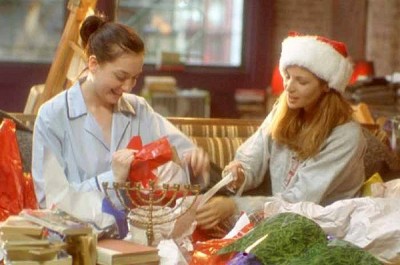