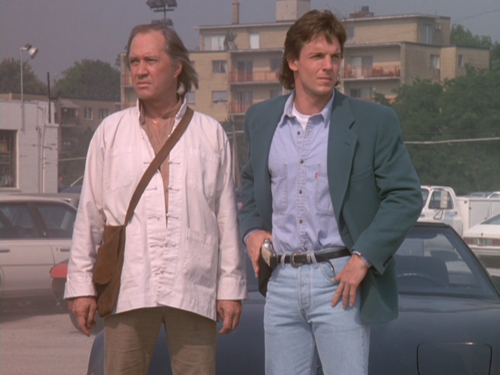 Although the internet tells me that Kung Fu: The Legend Continues ran Wednesday nights on PTEN, Warner Brothers' first attempt at its own TV network in the '90s, I remember catching the show on my local Fox affiliate on Sunday afternoons. Considering that Wednesday nights in the spring of 1993 were characterized by the Sophie's Choice between Home Improvement and Seinfeld, it was probably best that my local station re-scheduled the show. Instead of missing Kung Fu: The Legend Continues altogether, many of my lazy Sundays would be filled by the exploits of Caine and son as they fought bad guys with a blend of ancient Shaolin wisdom and street smarts.

A sequel to the 19th Century-set series Kung Fu (1972-75), The Legend Continues returns David Carradine to the role of wandering Shaolin priest Kwai Chang Caine, but with a twist. This Kwai Chang Caine is actually the grandson of the original Caine and he lives in modern times. This modern Caine is somehow still half-American and half-Chinese two generations later, and he retains his grandfather's stoic manner, slow halting speech, and willingness to provide help to anyone who asks for it. Executive producer (and, I'm assuming, showrunner) Michael Sloan uses the Caine character to fashion a semi-remake of his short-lived buddy-ninja series The Master (noteworthy for being hilariously mocked on Mystery Science Theater 3000) by teaming Caine with a long-lost wiseacre son, Peter (Chris Potter), who has become a lone-wolf cowboy cop (is there any other kind?). The nearly-60-year-old Carradine is still clearly not a kung fu master, but his slow, measured movements fit well with Caine's character and leave room for Caine's son to get in there and shoot some of the bad guys that the old guy isn't busy slowly kicking.

The excellent double-length pilot episode, written by Sloan and directed by TV pro Jud Taylor, tells the story of the separation and reconciliation of father and son. Caine and Peter are shown living in a Shaolin monastery in California in the late '70s. (This setting will return during flashbacks throughout the season, allowing us to see Caine and Peter's teacher-student/father-son dynamic in its early stages and also allowing the writers to cook up thematic lessons for Caine to teach young Peter that inevitably tie into the present-day plot.) One night in 1978, an excommunicated priest returns to the temple with a band of henchmen and destroys it. In the confusion of the attack, both Peter and Caine are mistakenly led to believe that the other has died. Fifteen years later, father and son are reunited by chance in the Chinatown section of a large American city. (I don't recall the city ever being named, but Wikipedia seems convinced that it is supposed to be New York. If that's the case, the city where the show was actually shot -- Toronto, Canada -- makes for a credulity-straining stand-in.)

It turns out that a crime lord the cops are after for ravaging Chinatown, the mysterious Tan (Ernest Abuba), is actually the renegade priest who destroyed the Shaolin temple and separated our heroes. Therefore, Peter and Caine find themselves hunting the same villain for different reasons. They come to the aid of a wise man with long, wispy facial hair known as "The Ancient" (Kim Chan), after his apartment is bombed by Tan's men. The Ancient was previously a monk at Caine's Shaolin monastery, and he serves to counsel Caine and Peter throughout the season. Though Peter and Caine eventually get the better of Tan at the end of the pilot episode, he is allowed to escape for more potential run-ins later in the series. The only time Tan does resurface this season, however, is in the fairly lame episode "Challenge," where Tan kidnaps the Ancient and makes Caine and Peter run through a deadly (but dumb) obstacle course to save him. 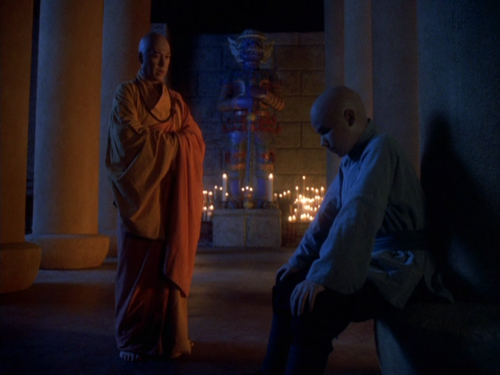 The stark difference in quality between the two Tan appearances illustrates the biggest hiccup with this first season of Kung Fu: The Legend Continues. There is unfortunately no consistency in quality or tone from episode to episode. Particular staff writers and directors can't even be depended upon to deliver every time. For instance, while Sloan's pilot episode feels nuanced and well-structured enough to be a low-budget theatrical feature (and, considering the female nudity in the version presented here, Warners probably tried to release it that way overseas), almost all of the other episodes featuring Sloan's byline are scattershot and occasionally flat-out painful.

The helpful by-product of this tonal schizophrenia is that the show gets a chance to try out a bunch of different approaches to telling its stories. Certain episodes seem to be aping American action movies in the Die Hard/Lethal Weapon vein ("Sunday at the Hotel with George," the William Shatner-directed "Secret Place"), while others focus on the mysticism of martial arts (the ridiculous "Shadow Assassin," featuring Martin Kove, the evil sensei of the Cobra Kais from The Karate Kid). One of the episodes, titled "Dragonswing," is basically a gloss on The Magnificent Seven, with guest stars Robert Vaughn (The Man From U.N.C.L.E.) and Patrick Macnee (the UK Avengers) recruited to fill out the posse. The best episodes from the season find the balance of these various influences and styles, while actually taking the time to develop the slow re-connection between Caine and his son.

The show cycles through numerous supporting players, in search of someone to compliment Carradine and Potter, but invariably the strongest supporting performers are Chan as The Ancient and TV journeyman Robert Lansing as Peter's police captain/surrogate father Paul Blaisdell. Even though Blaisdell is forced to indulge plenty of assuredly illogical (and occasionally illegal) investigative nonsense whenever Peter is working a case with his father, Lansing manages to make the captain's fatherly permissiveness believable and sympathetic -- when, in real life, it would probably get both Blaisdell and Peter fired.

Just as it began strong, the first season ends with a strong two-parter called "Redemption," that focuses not only on the connection between Caine and Peter but also on their ancestral legacy. In a rare instance of The Legend Continues engaging with the mythology of the original Kung Fu, Caine and Peter are given a chance to protect the secret living heir to the Chinese throne (played by Ernie Reyes, Jr., from Surf Ninjas and Teenage Mutant Ninja Turtles II) in the days leading up to his ascension. It's a service that will rid their bloodline of the shame created by the original Kwai Chang Caine when he murdered the emperor's nephew back in the 1800s. The producers must not have known if The Legend Continues was coming back because they seemingly try to wrap up not just this season, but also the series... and the original Kung Fu series too. It turns out that they had no need to worry, but the material about family and legacy that was weaved into the closing episodes to give them thematic heft is entirely welcome.

The first season of Kung Fu: The Legend Continues is dogged by inconsistency, but the best episodes are truly a lot of fun. While the show doesn't always seem to know how to satisfyingly blend action and drama with the show's metaphysical and spiritual elements, the warm and often funny chemistry between Carradine and Potter smooths over plenty of the bumps. 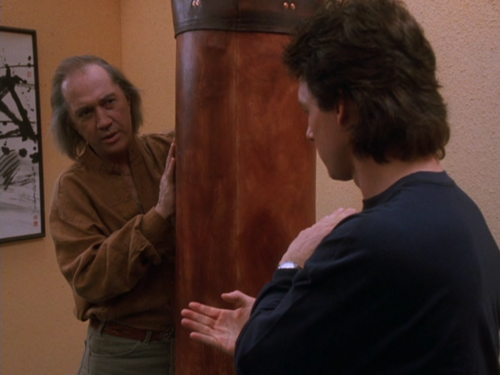 The DVDs
Warner Archive Collection presents this first season of Kung Fu: The Legend Continues on 6 DVDs. Although eventually the discs will be manufactured-on-demand DVD-Rs, the initial pressing features real replicated DVDs. If you have an interest in this series, you need to have this first printing.

The Video:
The standard 1.33:1 presentation of this first season is a jaw-dropping surprise. At some point, Warner had to have gone back and remastered this show, because -- apart from the credits sequences and some of the opticals (fades, dissolves) -- these episodes look better than they did in their initial broadcast. These transfers display far greater detail with richer, more accurate color than one would rightly expect from a show of this age. While Kung Fu: TLC isn't exactly a "pretty" show, and the transfers admittedly suffer from occasional dirt and speckling, this presentation still definitively blows away a similar recent TV release like NYPD Blue: Season 5.

The Audio:
The Dolby 2.0 stereo audio sounds great. The soundtrack is well-mixed, with perfectly understandable dialogue, clear and effective musical score by Jeff (brother of Mychael) Danna, and plenty of powerful effects during the frequent gunfights and scenes of stuff blowing up. No subtitles.

Final Thoughts:
With its deftly executed highs and shockingly tone-deaf lows, this first season of Kung Fu: The Legend Continues is both better and worse than I remembered. My sentimental memories of watching the show (and my general affinity for '90s Action Entertainment) leads me to want to focus on the strengths of this season. Plus, the remastered A/V on the DVD is a genuinely surprising notch above the treatment a lesser-known show like this would typically receive. With that in mind, I absolutely must Recommend this DVD set. 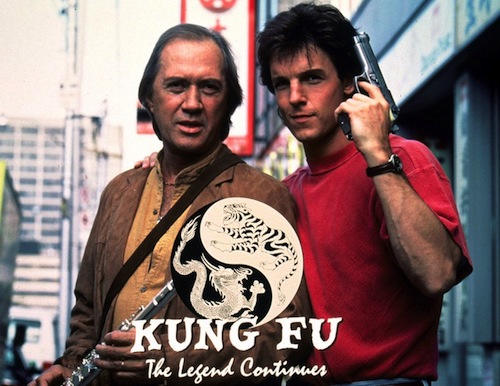