Funny Thing Happened on the Way to the Forum, A

Kino // Unrated // September 9, 2014
List Price: $29.95 [Buy now and save at Amazon]
Review by Stuart Galbraith IV | posted September 15, 2014 | E-mail the Author
A Funny Thing Happened on the Way to the Forum (1966) is director Richard Lester's Forum a lot more than it is faithful to its original source, the 1962 musical farce by Burt Shevelove and Larry Gelbert, with many famous songs by Stephen Sondheim. For the movie, seven Sondheim songs were dropped and a lot of it was rewritten, partly to accommodate co-star Phil Silvers. Zero Mostel and Jack Gilford, stars of both the musical and the film, weren't happy with the results, and neither were Sondheim (especially) nor Shevelove and Gelbart.

On its own terms, the movie of A Funny Thing Happened on the Way to the Forum is immensely enjoyable, but even if you've never seen a good production of the musical it's obvious that in adapting the material Lester made two radical changes beyond cutting/changing the show's songs and book. The first was a then-innovative rethinking of how a movie about Ancient Rome should look in terms of things like set decoration and the use of extras and bit players, and the second was an approach to comedy that expanded on the type of comedy-through-editing Lester employed so successfully in his two movies with The Beatles: A Hard Day's Night (1964) and Help! (1965). These changes enhance Forum in some ways, but also hurts it tremendously in others.

Mark Evanier, whose blog "News From Me" is required daily reading for this reviewer, concisely discusses some of these issues in a recent blog entry that I heartily recommend. I mostly agree with his assessment of the film, but also lean more toward the philosophy that the stage musical is the stage musical, the movie is the movie, and that it's possible to enjoy both while accepting the flaws of one or the other or both. Certainly there are many other examples: MGM's movie of On the Town (1949) is quite different from the original show yet both are great examples of their respective mediums. The movie of Fiddler on the Roof dropped a song or two from the original show and (wisely) replaced Zero Mostel, the star of that Broadway show as well, with Israeli actor Topol, yet both turned out great.

One point Mark Evanier doesn't make is that good stage productions of Forum partly depend upon the very intimacy and immediacy that the theatrical experience offers. What played before a live audience wouldn't necessarily have worked on film projected in a movie theater. Nevertheless, the movie of Forum does suffer from its aggressively cinematic approach. The movie didn't have to be completely faithful to the Broadway show, but less frenetic direction surely would have helped.

And, in a sense, this point was proven a few years later, in a mostly forgotten but hilarious 1971 film, Up Pompeii, based on the popular British sitcom starring Frankie Howerd, a movie that is virtually Forum minus Sondheim's songs. Directed by Bob Kellett and written by Sid Colin, in many ways it's closer to the spirit of the original Broadway Forum. Moreover, actor Michael Hordern plays virtually the same role in both the movie Forum and Up Pompeii; he's very funny in both.

Kino Lober's Blu-ray of A Funny Thing Happened on the Way to the Forum is just okay. I've seen 35mm prints several times through the years and those had color that really popped. This release is rather bland color-wise, though in its defense Lester's cutting employs all manner of process shots and guerilla editing techniques that exhibited a lot of imperfections even when the film was new. Still, it's not that great a leap from DVD to Blu-ray that this reviewer had hoped or expected. 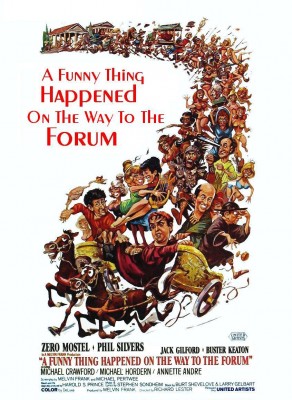 Adapted from the ancient Roman farces of Plautus and altered further from the show by screenwriters Melvin Frank and Michael Pertwee (brother of actor Jon Pertwee, who has a small role in the film), the movie follows the machinations of genially conniving Pseudolus (Mostel), a slave longing to be free. He lives in the home of Roman citizen Senex (Hordern), whose shrewish wife, Domina (Patricia Jessel), dominates completely. The large home is also inhabited by their son, Hero (Michael Crawford) and excitable head slave Hysterium (Gilford). Senex's next-door neighbor, the nearly blind Erronius (Buster Keaton), returning from abroad after searching for his long-lost children, kidnapped by pirates, also figures prominently in the plot.

Hero is in love with Philia (Annette Andre), a common courtesan in the House of Marcus Lycus (Phil Silvers), Senex's other next-door neighbor, a slave-trader specializing in beautiful women. Philia, however, has already been sold to the celebrated if ruthless Roman captain Miles Gloriosus (Leon Greene). Pseudolus makes a pact with Hero: if he can arrange for Hero to get the girl, the young lad will grant Pseudolus his freedom. Like all great farces, Forum's story soon becomes dizzyingly complex and funny before all is happily resolved. A more detailed synopsis would spoil half the fun.

The film version has its good points and bad points. As Evanier points out, the movie generally plays well for those who hadn't already seen a good production of the musical. It's also true that its many flaws aren't as apparent on a first-time viewing. The cast is peerless, however, offering viewers the chance to see Mostel and Gilford recreate their characters from the Broadway show, though Gilford is denied his standout solo, "I'm Calm," one of the Sondheim songs cut for the film version.

The movie was an American-British co-production, with most of the supporting cast and crew being British rather than American, while Lester was himself a expatriate American living in England since 1953. Partly for this reason Phil Silvers was cast. Sgt. Bilko was an even bigger sensation in the U.K. than it had been in America. (Silvers played a Bilko-esque character in Follow That Camel, a Carry On comedy, in Britain the following year.) Also hot off the hugely successful It's a Mad Mad Mad Mad World (1963), Silvers was also the biggest name in the cast, so his part was greatly expanded from the Broadway show, which had John Carradine (of all people) in Silvers's part. Further, Silvers was the original choice to play Pseudolus in the Broadway show, a part Silvers turned down.

One of the pluses of the movie is that it essentially offers two Pseudoluses for the price of one, and the interaction between Mostel and Silvers is often priceless. Silvers would go on to star in a widely-acclaimed 1972 Broadway revival of Forum, considered the best-ever adaptation by some, a revival tragically cut short when Silvers, who would win a Tony Award, suffered a debilitating stroke barely a hundred performances into its run.

Keaton's Erronius was the great silent movie clown's last film role. He was 70 years old and terminally ill with cancer and for that reason doubled in a couple of long shots, but near the end of the picture does an impressive pratfall (spoiled somewhat by Lester's cutting, alas). While hardly tailor-made to suit his talents, Forum isn't a bad send-off.

Lester innovative style of screen comedy direction suited The Beatles better than Forum. At the time, and for decades after, his editing was profoundly and uniquely fast-paced (movies and TV shows wouldn't catch up until the 1990s). Lester also created humor in the cutting itself. Evanier makes the compelling argument that Lester's style essentially takes the comic performances out of the hands of the actors and into Lester's, to bad effect. There's some truth in that; too much of the picture needlessly cuts away from actors the audience wants to watch at a particular moment and to something else, and sometimes this something else is completely irrelevant to what's happening story-wise. Sometimes, as in the song "Everybody Ought to Have a Maid," Lester pulls it off (despite one glaring mistake), but too often it's merely distracting.

In the wake of austere, epic sets and set decoration in movies like Cleopatra (1963) and The Fall of the Roman Empire (1964), Lester choose a grimy and especially chaotic look for Forum. This allowed for an environment probably more historically accurate in some respects, while creating opportunities for comedy in other areas. As with the most of Lester's choices, sometimes this innovative approach works well, at other times not.

Another big hit-and-miss change was the decision to include a sight gag-crammed slapstick chase climax not in the stage version, one closely patterned on the silent comedy of Mack Sennett (while still incorporating Lester's editing style). Some of the gags are funny, and every time I've seen the film in a theater with a large audience they seem to enjoy this sequence enormously. But it also wreaks havoc on the farce's momentum, stopping the intricate story dead in its tracks for what amounts to a disconnected 15-minute set piece.

Using what appears to be an older transfer provided by MGM, Kino Lorber's A Funny Thing Happened on the Way to the Forum improves slightly on MGM's earlier DVD, but not enough. The color is rather dull and the image is frequently dirty and flawed, though some of this is the result of Lester's editing techniques and the use of optical effects rather than the fault of the transfer. The image is in its original 1.85:1 widescreen. The 2.0 DTS-HD Master Audio, adapted from the original monophonic theatrical release, seems to incorporate stereophonic tracks from the original soundtrack album. The only Extra Feature is a trailer, in high-def.

A lively, funny film with a gaggle of great performances compromised by overly-aggressive direction and a Blu-ray release let down by a lackluster transfer, A Funny Thing Happened on the Way to the Forum is Recommended primarily to those who don't already own MGM's earlier DVD.