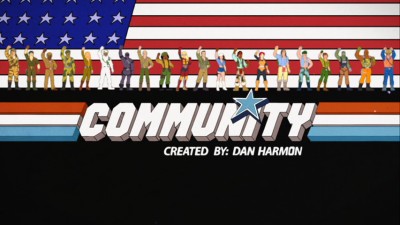 
The Story So Far...
Springing forth from the imagination of unconventional creative genius Dan Harmon and his team of merry pranksters, Community is, on the surface, the story of a study group of misfit community college students, but it's really a tale of friendship, defined by the surreal world it exists in and the creative ways it's told. Four seasons have aired on NBC over the past years, garnering an obsessed fanbase and critical acclaim, with the first three seasons released on DVD. DVDTalk has reviews of all the sets including something called "Community: The Complete Fourth Season" (whatever that is.).

The Show
If you check out the link above, you'll notice, I didn't write a review of the Season Four DVDs of Community. It's unfortunate, and a little weird, but for some reason, they were never released. Apparently, Sony decided to skip right to the show's fifth season, with the characters explaining away the gap, noting that there was a gas-leak at the school last year. An odd choice to be sure, but it was great to see Dan Harmon and company back after an extended summer vacation that in no way involved him being removed from his own show, and replaced for a run of episodes that no one really wants to remember.

All of that is unimportant now though, since we had a tremendous fifth season to enjoy, and now, we know that a sixth season, courtesy of Yahoo! Screen, is on the way, and a movie is likely to follow, bringing the show's rallying hashtag of #sixseasonsandamovie to fruition. But even if Yahoo! hadn't stepped up to deliver another semester at Greendale Community College, the fifth season would have been a fantastic send-off, as Harmon's return to the show resulted in the show re-discovering itself, returning to the subversive, silly series that fans fell in love with.

Before getting into the new season's storylines, this season brought a few significant changes to the show. Chevy Chase's acerbic Pierce character transferred out of Greendale and into a coffin. Though motivated largely by forces outside of the show's fictional world, the event was integrated well into the first few episodes, as Pierce's presence was still felt, in hologram form and as interpreted by Walter Goggins (Justified), in yet another classic Community bottle episode. To be nice to Chase, one could say he was missed, and the bottle episode certainly reminded viewers of the character's best aspects, but the dynamic wasn't integral to the group, and he was neatly replaced in the inner circle by gruff criminology professor Hickey (Breaking Bad's Jonathan Hickey) who, because he wasn't reliant on the group for friendship, could call them on their flightiness, especially Abed, who is the recipient of a healthy dose of reality this season. John Oliver's character Duncan also returned, tied to Jeff becoming a teacher, bolstering the line-up against any losses.

The other big change is the departure of Donald Glover, who plays Abed's best friend, dopey, good-hearted jock Troy. This one was a tough one for fans to accept, thanks to his talent and the importance of the Troy/Abed relationship to the series. After four solid episodes, including an epic game of "Hot Lava" that served as a chance to say goodbye, Troy shipped out, and the show certainly felt a bit different. But as was the case with season three, the show has no problem interchanging relationships (both positive and negative), so you get pairing between Abed (Danny Pudi) and Britta (Gillian Jacobs), Hickey and Annie (Alison Brie) and even a double-crossing deal between Britta, Hickey, Chang (Ken Jeong), Shirley (Yvette Nicole Brown) and Jeff (Joel McHale). In the end, it's really about the group as a whole, more than the individuals inside it, so they could get past the loss of a few characters. 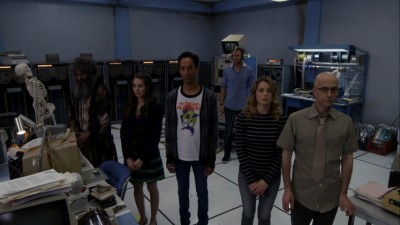 As is usually the case with Community, there are several episodes that break out of the normal episode structure (whatever that means on a show like this), and season five is no different, giving us the aforementioned "Hot Lava" episode (a schoolwide game similar in concept to the legendary paintball episodes), a pitch-perfect David Fincher-inspired mystery in "Basic Intergluteal Numismatics" and a second Dungeons and Dragons episode (featuring David Cross) which is bigger and better than last time out. Among the genre outings, one of the best though is "App Development and Condiments," which takes a story about an app being beta tested at Greendale called MeowMeowBeenz, and spins it into a future-tinged story of class warfare, pitting Shirley against Jeff for leadership of the school, with Britta finding her revolutionary potential in a bottle of mustard and an ‘80s party hero blended into the madness. This episode is everything that makes Community such a cult hit, distilled into 22 minutes of oddball comedy.

However, as good as the MeowMeowBeenz saga may be, nothing had a chance of topping "G.I. Jeff", the most subversive half-hour of prime-time sitcom television since the days of Mary Hartman, Mary Hartman. As Jeff battles personal demons, the struggle is portrayed as an episode of his favorite childhood cartoon, G.I. Joe, with the Greendale gang inserted as characters. Certainly, nostalgia is a powerful force, but this isn't just about the ability to recognize a parody of that classic animated series. It's the integration of the concept into the show, not to mention the inclusion of live-action commercials that are woven into the story, ensuring that anyone not keyed in who happened to land on NBC at that moment had no idea what in blue blazes was going on. That the animation was such a dead-on imitation of the original was the cherry on top of an amazing sitcom episode that joined the hall of fame of Community entries that raised the bar for the art of the sitcom.

Is it all good? It's tempting to say yes, as a quick scan of the episodes created by a reinvigorated creative staff reveals no real weak spots, except for the fact that the season didn't end with "G.I. Jeff", and continued to wrap with a two-part finale involving the sale of the school, a treasure hunt and a guest appearance by Chris Elliott. There's nothing wrong with those episodes, and the end of the last episode would have made for a fine series finale if that was the way the show was to take its final bow. It's just a matter of comparison. Not everything can be the best, but season five comes pretty darn close. 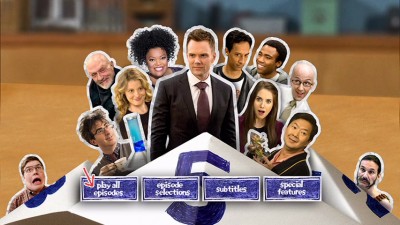 The Discs
The 13 episodes of Community's fifth season arrive on three DVDs, packed in a standard-width keepcase (with a tray) which comes in a slipcase. The discs have static anamorphic widescreen menus with options to play all the episodes, select shows, adjust languages and check out the extras. There are no audio options, but subtitles are available in English SDH.

The Quality
Like the previous set, the anamorphic widescreen transfers here look great, with appropriate color and a high level of fine detail. Black levels are solid across the board, and there are no noticeable issues with compression artifacts.

The Dolby Digital 5.1 soundtracks are great, delivering dialogue in the center channel, with the surrounds offer a boost to the show's music, as well as some minor atmospheric effects in the side and rear speakers. There's no dynamic mixing going on, but you're not going to find any problems either.

The Extras
As with previous seasons, every episode has a commentary, with Harmon on hand for almost every track, along with a mix of cast and crew, with only Jacobs, Rash, Chase (naturally) and Glover (as usual) not heard from. Otherwise, these are a great time for fans of the show or for anyone interested in television production, as you get to hear lots of behind-the-scenes info, along with a load of friendly banter, as Harmon is eternally self-deprecating, and no one holds back on making fun of anyone else. There's a lot of talk of what it took to get the show back up and running, the challenges of working with Banks, the absences of Chase and Glover, dealing with budget, the inspiration for various characters and other production minutiae. Of course, the special episodes give the participants plenty to chat about (such as when director Rob Schrab sits in on "G.I. Jeff"), and we get to hear from Koogler himself, Mitchell Hurwitz. These tracks are can't-miss for fans of the show, like lucky outsider (and very drunk) Dino Stamatopoulos, who got to sit in on a few of them.

Here's a breakdown of the commentary participants:

Perhaps the DVD producers truly thought that this was going to be the last season of Communityor perhaps they were just inspired by events surrounding the show, but either way the result is the most in-depth Community extra to date, the 42:24 "Advanced Television Production: 5 Days, 2 Scripts, No Sleep." Chronicling the writers room's push to write two complete episodes in just five days, the piece gives a pile of insight into how the show comes together, looking at the writing, the audio mixing, rehearsal and other bits and pieces. What's most interesting is knowing what eventually happens in the episodes, and seeing how they get there. The commentaries may provide a lot of behind-the-scenes info, but this is the good stuff.

However, the featurettes don't stop there. Considering the way previous DVD sets have worked, it made sense that the season's spotlight technical accomplishment, the animated G.I. Joe episode, would be highlighted in a featurette. "Re-Animating the ‘80s" (17:35) digs into how the episode was made, featuring interviews with Harmon and Schrab, several of the cast members, and artists Julie Vickerman and Larry Houston. There's nothing that goes without comment, including the designs, the animation work and the live-action segments.

Wrapping things up is a 5:58 outtakes reel, which is genuinely enjoyable, whether it's Pudi's Nicolas Cage imitation, Banks' Popeye imitation, Brie's dancing, some silly greenscreen footage or an epic, uncensored F-bomb fest around the study-room table. 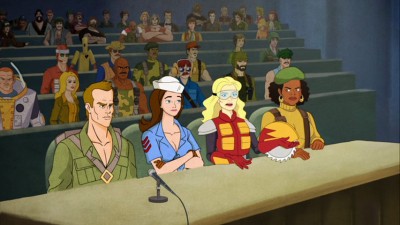 The Bottom Line
Though it's unfortunate that the show had to skip its fourth season, and even more unfortunate that Donald Glover said goodbye to the show, everyone came back in top form, and season five included some of the finest episodes the show has ever made, including the brilliantly subversive "G.I. Jeff." The DVD set, which looks and sounds great, is loaded with entertaining extras that any Community fan will want to see. Check this set out, and get ready for season six (and a movie.)