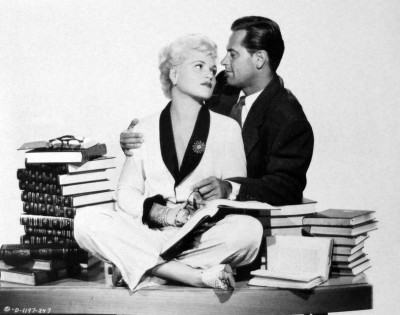 My goodness, but how wonderful is Judy Holliday? If we were to do some serious consideration of cinema's best comedic performance by a woman, her turn as Billie Dawn in George Cukor's 1950 adaptation of Born Yesterday would be hard to beat for the top spot. And I would spend a good long time debating whether to remove the qualifiers "comedic" and "woman." It's just one of the best performances period.

Based on a stageplay by Garson Kanin (Adam's Rib), Born Yesterday is a hilarious romantic comedy about a former chorus girl treading into new territory. Billie was plucked from the stage nearly a decade prior by a bullying junkman. Harry Brock (Broderick Crawford, All the King's Men) is a self-made businessman just a few steps to the right of most common hoods and gangsters. He has turned his collection of junkyards into a thriving industry. He and Billie have moved to Washington D.C. on the advice of Brock's besotted lawyer (Howard St. John, playing drunk with remarkable understatement and consistency). There Brock can grease the political wheels personally and influence legislation in his favor.

Blind to their own shortcomings, though not each other's, the two men zero in on Billie as a potential problem. The brash dancer isn't afraid to speak her mind, and she does so in a high-pitched squeak, somewhere between Fran Drescher and Marisa Tomei in My Cousin Vinny--and two years before Jean Hagen pulled a similar routine in Singin' in the Rain. In Holliday's hands, this raspy, accented delivery is priceless, as she pings between sweet and girly to angry and loud, sometimes more than once in the same sentence. You never know which way she's coming from.

Which is what scares her jerk of a fiancé and his shyster lawyer, who have been using Billie to hide Brock's assets for years, thinking she's too dumb to ever figure it out. Wanting her to get by in fancy society, however, Brock hires her a tutor in the form of Paul Verrall (William Holden), a newspaper reporter who impressed Brock with his honesty and moxy. Paul takes the job, and he quickly takes a liking to Billie. She also takes a liking to him, partially because he proves genuinely interested in seeing her develop her mind. Like Henry Higgins but without the ego, he takes her to see the sights and gives her books to read and tries to help her understand. He's also a gentleman, holding back and ignoring his feelings and keeping their relationship strictly professional. Before long, however, Billie is going to get wise to what is really going on with Brock's business, and the house of second-hand cards he's built will start crumbling down. 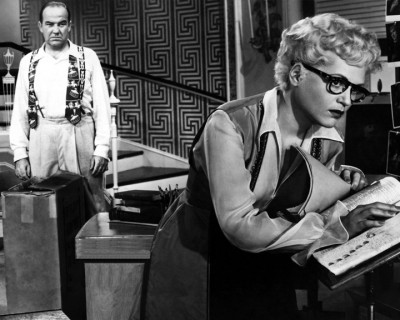 Man, just bringing up cards makes me smile thinking of the scene in Born Yesterday when Billie and Brock play rummy and she handily beats him without even trying. For a script with dialogue as whipsmart as this one (adapted by Albert Manheimer, but with additional touch-up by Kanin), there is also some great physical comedy. For most of the card game, Billie shuffles her cards back and forth and hums a jazz tune while Brock simmers and steams. It's one of those famous movie scenes you never want to end. Holliday slays with the slightest gesture. As she is famous for saying, you have to be pretty smart to convince people you're as stupid as Billie. It also requires a lot of soul so that the audience is rooting for the character rather than making fun of her. Holliday had soul to spare. If there was a literal veil over her eyes, it's lifted as Born Yesterday progresses. Watch as the way the actress carries herself subtly changes as each sequence follows the last.

It points out how good Holliday is that she eclipses such fine performances by her co-stars just by mere presence. Broderick Crawford is phenomenal as the blustery, insecure brute. You really come to hate him by the end. Some of the things he says, and how he says them, are so vile, you practically don't need the story to take a dark turn into violence the way it does at the end of the second act. Yet, that also adds more weight to Holden's portrayal of the principled do-gooder. He holds his own without raising his hands.

And he's also so romantic. The way he looks at Billie, and the way he counsels her without making fun or looking down his nose, the heart just melts. It's so romantic! What a fantastic screen couple, and they hardly even share a kiss! Holden was just at home playing the drunken playboy, especially in films for Billy Wilder like Sabrina and Sunset Boulevard, but I'll take him as a straight-up leading man any time.

Cukor is at the absolute top of his game here. Born Yesterday has been assembled by a master's hand. The choreography is light on its feet, moving through the duplex luxury hotel apartment Brock and Billie share with a flare taken straight out of classic screwball comedies, and yet he was also just as adept at managing his actors in smaller spaces, making even an outdoor conversation next to the Capitol Building seem as intimate as a candlelit dinner. He knows when to go broad and when to hold back, and also to go for the slow burn. Note how long he lets Judy Holliday be on screen before ever having her speak, appearing at first as almost a prop or eye candy before unleashing that first, "WHAAAAAAAT?!."

I could go on and one. What surprises me the most about Born Yesterday is how I've somehow managed to go all this time without ever seeing it. I knew of it, but had never sat down and watched it. Don't be a chump like me and wait any longer if you haven't seen it either. Born Yesterday is a knock-out! 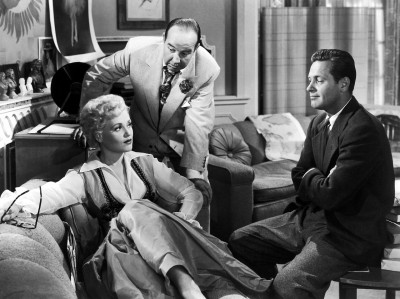 Video:
Twilight Time's edition of Born Yesterday is limited to 3,000 copies. It boasts a 1.33:1 full frame transfer presented in 1080p. The black-and-white image is quite nice, with the right amount of grain and strong resolution. A few scenes are hazier than others, or you might notice the occasional blur around the edge of the frame, but any softness quickly passes. In terms of surface image, there appeared to be no dirt or blemishes. While the image quality is not revelatory, this is a nicely done transfer with good depth and a nice balance between light and dark.

Sound:
The original soundtrack has been remixed in English 1.0 DTS-HD Master Audio. It's a nicely centered track with good volume and consistent tones. No glitches or drop-outs were apparent, and the music and dialogue play off each other well.

Subtitles are in English for the Deaf and Hearing Impaired.

Extras:
Extras include an isolated music score and theatrical trailers, as well as a booklet with liner notes and photos.

FINAL THOUGHTS:
Highly Recommended. A revered comedy that delivers the laughs, Born Yesterday made Judy Holliday a star and earned her an Academy Award in the process. The actress plays a former showgirl in a sort of My Fair Lady scenario, taking social etiquette and history lessons from the handsome William Holden so she can get along in Washington D.C. so her crook of a fiancé can bribe politicians and make more dirty money. Holliday is a delight, a master of physical comedy and also a killer with both slow burns and quick witticisms. It's that most wonderful of romantic movies where the object of affection seduces the audience at the same time as the folks in the movie. Hilarious and heartwarming and perfect in every way. 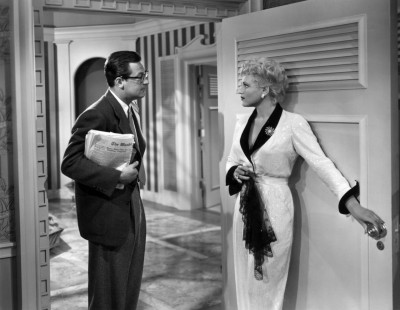