Birthday Boys: Season One, The 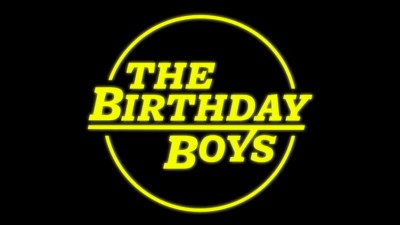 
The Show
Someone once said that every sketch comedy troupe will one day have a television series (I believe it was Andy Walhar.) With UCB residents The Birthday Boys having established themselves on IFC, we are one step closer to that reality. Having served as writers and guests on IFC's Comedy Bang! Bang! adaptation, they were a natural fit for the network, with the series being shepherded by Mr. Show star Bob Odenkirk and Red Hour Productions, home to another sketch comedy phenom, Ben Stiller. The result is a show that's remarkably polished for a gaggle of lesser-known comedians.

The series, which often features Odenkirk joining in the sketches, feels like a blend of many of the genre's best, taking a bit from several troupes, though not in any obvious way. There's the linking and surreal tone of a Monty Python, faux documentary packages like Mr. Show and pop-culture riffs similar to what The State was doing, but none of it feels like they are ripping anything off or even paying homage. The closest they might come to a direct comparison would in fact be The State, but that's mainly because they both feature a large cast and similarly chaotic sketch line-ups. The Birthday Boys' work tends to lean more toward the cinematic and features more meta comedy, with the group often functioning within the world of the show. And of course, Odenkirk's presence (along with several other guest stars) lends an air of legitimacy to the production. 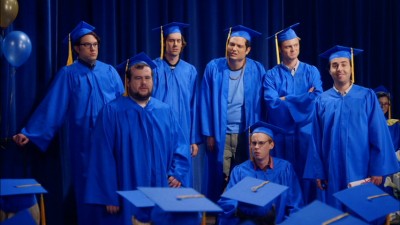 The structure of each episode is mostly consistent, with a main, extended sketch winding through a number of smaller bits, as well as the occasional recurring sketch within an episode, but even in that framework the show breaks its own conventions. For instance, one episode starts with a gang of roofers acting up on Odenkirk's roof, but soon they have their own TV show. Soon, we're watching that show, and then joining the cast behind the scenes of that show. In another episode, the idea of making fun of cultural touchstones spins out of control to the point where it makes fun of itself, while another finds one sketch telling the behind the scenes story of another sketch entirely.

Though the show does a fine job of building these connections and keeping the show flowing, it's at its best when it finds an idea and runs with it as far as possible, and then just moves on. For instance, one bit about a guy writing a letter is built entirely around a single pun, but the sketch gets in, drops its joke and gets out quick. Another involves Tia Carrere at a high-school reunion, elevating the gag to the point of breaking and then exiting. It's the willingness to go for those single-serve concepts that make every episode feel filled to the brim and keeps the batting average up.

That's important, because the show also has no problem wallowing in a bit that might not be advisable, like a puppet TV show that's just counting up each minute it's on the air, or a lengthy road-trip segment that got its point across well before it actually ended. Fortunately, the lingering misses are few and far between, as the first season offers a number of highlights to enjoy, including a silly documentary (with a tense narrator) that reveals the true pioneer of flight, an absurd sketch about an old man in the woods and a very creepy bit about a father, his son and prom night. Whether you're watching a TV news segment about a really good autistic basketball player or a how-to on roller skating, you're likely to laugh, and if not, there's something following soon after that's completely different. It's basically a buffet or perhaps a churrascaria of absurd comedy. 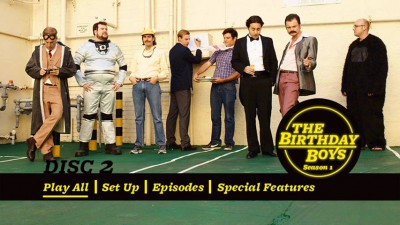 The Discs
The 10 episodes of The Birthday Boys' first season arrives on two DVDs, packed in a standard-width keepcase (with a tray). The discs have static anamorphic widescreen menus with options to play all the episodes, select shows, adjust languages and check out the extras. There are no audio options, but subtitles are available in English SDH and Spanish.

The Quality
Technical production skill is certainly a notable touch in this series, and these DVDs make all the various looks and techniques implemented (including old-school consumer video, grainy home movie and black-and-white film) look great. Color is appropriate across the board, while the level of fine detail is quite high, and compression artifacts were not noticed.

Surprisingly, these discs only deliver Dolby Digital 2.0 soundtracks. Technically, there's nothing wrong with these center-balanced tracks, as the music and dialogue are clear and easy to understand, but there's no oomph to them.

The Extras
Every episode has an audio commentary with the seven members of the troupe (unfortunately Odenkirk was not available to sit in.) Though there's some goofing around, including discussion of penis size, actor size, learning from Matt Besser and some appearances by Lorne Michaels, and the occasional fire alarm and earthquake, the group attempts to actually give some info about the production, including the transition from the stage show to the TV show. They also point out jokes that might have been missed. There's some mention of not being used to the idea of the commentary, so that might explain the hesitancy, but it felt like these tracks could have been a touch livelier. Maybe next time.

An excellent behind-the-scenes piece done mostly with montages, "The Making of Season One" (15:35), features plenty of on-the-set footage and several guests who didn't want to comment, as well as some flubs, some alternate takes, swearing at children and more Odenkirk. There's also a look (a quick one) at alternate logos that were apparently considered for the group. A solid entry all around.

Six scenes that were born on stage before being a part of the show can be seen in "From Stage to Screen" (10:45), which intercuts two performances, one from UCB in 2010 and the one seen on TV. Most survived the transition intact, though the nudity in "Ropes and Underwear" obviously gets a big reaction live, while "Pretty Dad" becomes even more disturbing with a different ending.

Thirteen minutes of bonus video is next, a mix of odd little clips, some cut footage and some web content (like brainstorming in the writers room or the press conference where IFC's offer to the Boys was accepted.) The best of the bunch is easily Odenkirk's improvised speech from a graduation sketch, where he just shows why he's a master. There's also eight promos for the show (running 6:06), one of which includes a number of alternate takes from the show. 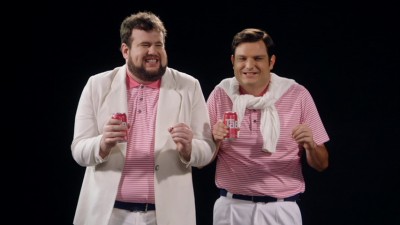 The Bottom Line
Lord knows we don't have enough white guys in sketch comedy, which is why we were blessed with seven more (and more Odenkirk!) in the form of The Birthday Boys And though it may be more of the same in terms of gender and race, it's certainly not as far as comedy goes, as this is a solid contender right out of the gate. The set looks and sounds solid and gives plenty of bonus content to enjoy, which makes it the right time to discover this group, or enjoy them even more.