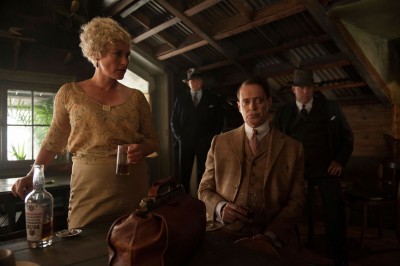 And so with The Complete Fourth Season of Boardwalk Empire, the venerable show of gangsters and G-men eases into its penultimate cycle. This is an important fact to consider, as it is very much a transitional season, a set-up for the grand finale. September's broadcast kick-off of the Fifth Season marks the show's last.

Some complained when Boardwalk Empire: The Complete Fourth Season was being serialized because there was a perceived downshift in tone from the previous round. From a storytelling standpoint, this made sense, however, both in that Atlantic City crime boss Nucky Thompson (Steve Buscemi) is circling the wagons and shoring up the troops following his showdown with Gyp Rosetti, and also in that Bobby Cannavale's sadistic crook was so oversized in presentation, it would have been a mistake to try to replace him with another larger-than-life protagonist. Instead, the show's writers invent two new villains for Thompson and his crew, both evil in their way, but more sinister than muscular.

It's 1924 on the Jersey Shore. Bootlegging is still the top commodity in the criminal underworld. With former revenue agent Nelson Van Alden (Michael Shannon) now living as George Mueller in Chicago and rubbing elbows with Al Capone (Stephen Graham), the void he left behind is filled by a fresh-faced Iowa boy cutting his teeth on a rookie badge. Of course, Agent Knox (Brian Geraghty, The Hurt Locker) isn't all that he seems. Far more ruthless than his down-on-the-farm image might suggest, the man has ambitions. He also works for J. Edgar Hoover (Eric Ladin) and not the Prohibition task force as he pretends. Knox has ideas, and he plans to apply pressure where necessary to take down Nucky's operation. 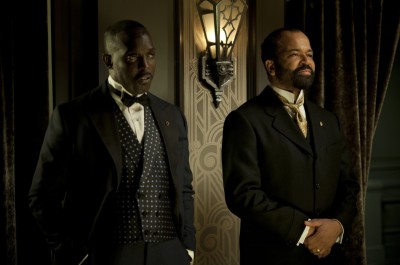 The other new villain--a funny phrase to use in a show all about bad guys, but then, we rooted for Tony Soprano against fed and foe alike, as well--is Dr. Valentin Narcisse (Jeffrey Wright, known for Basquiat and The Hunger Games: Catching Fire). Narcisse is a scripture-quoting heroin dealer with notions of representing the black community in all things wicked and divine. He comes in direct conflict with Chalky White (The Wire's Michael Kenneth Williams), Nucky's right-hand man in the African American community in Atlantic City, who has just opened up his own nightclub with all black entertainers--another business Narcisse has his hand in.

Narcisse is a more devious opponent than the usual hard-charging gunmen that come out of organized crime, but he is no less deadly. His machinations mess with everybody, and give Chalky his most complicated storyline so far. The trouble he causes also puts a test to the notion that this nasty business of Nucky's is somehow "family," either extended (and implied) or direct. It's been a big part of Boardwalk Empire for its entire run, with fathers going against sons and brother against brother. This carries on in The Complete Fourth Season with the young Willie Thompson (Ben Rosenfield) looking to enter the family trade and finding more of an ally in his uncle rather than his father, Eli (Shea Whigham). Meanwhile, Gillian Darmody (Gretchen Mol) struggles to keep it together while fighting to regain custody of her grandson. And that boy's one-time protector, Richard Harrow (Jack Huston), is on the road, where he deals with some family issues himself. 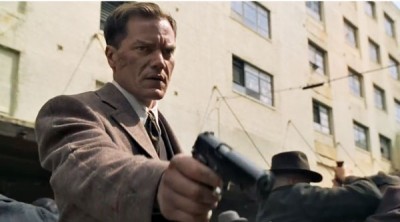 The only family aspect to get short shrift this time around is actually Nucky's adopted family. Margaret (Kelly MacDonald) is hiding in New York, away from her husband's influence. She only appears in four episodes. Nucky has a new love interest: a tough barkeep (Patricia Arquette) in Florida who ends up helping him with some smuggling. This gives Nucky a convenient out-of-the-area escape as he plans to lessen his public role more and more.

As is to be expected in this kind of show, the first handful of episodes of Boardwalk Empire: The Complete Fourth Season are largely setting up the new status quo, positioning the players, establishing who will be pitted against whom. Things escalate quickly, though, beginning around episode 4, once various deals have been made. This leaves us plenty of time for the trademarks of the show, including violent altercations, dirty deeds, and lots of good music. Margot Bingham joins the recurring cast as a singer in Chalky's Onyx Club. Though a fictional creation, her character Sister evokes troubled jazz chanteuses like Billie Holiday. Bingham and the other additions to the cast maintain the expected high standards of performance. Wright is marvelous playing evil. So quiet, coiled up like a snake, biding his time. Geraghty is also smarmy and mean, almost more evil than Wright for how Knox is a chameleon, shedding and changing stripes like they're on his pajamas.

Story-wise, there are some surprises and some "oh, no!" moments, as befitting weekly television. Cliffhangers are designed to keep you coming back, and Boardwalk Empire is as addictive as its best competition. Given the detailed production design and the 1920s setting, as well as its mix of made-up characters and historical players, it'll never cease to surprise me that Boardwalk Empire is not considered appointment television. Hopefully that will change now that it's streaming on Amazon. If any of you want to binge and catch-up, you still have a little bit of time before the series enters its final lap. 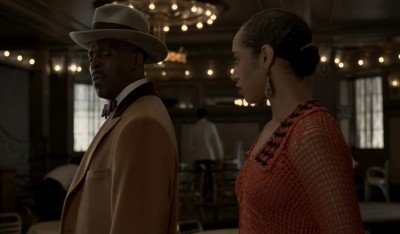 There are twelve episodes in this season, an hour per, three on each of the four discs.

Sound:
The main English-language soundtrack is given a DTS-HD Master Audio 5.1 mix. It's excellent, with lots of atmosphere pinging between the speakers, and a good verve given to the show's excellent period music. The sound is as crisp as you would hope for a high-end set of this kind.

You also have the choice of French and Castilian Spanish in DTS 5.1 and Latin Spanish DTS 2.0. There are subtitles in all three of those languages, alongside English SDH, Dutch, Danish, Finnish, Norwegian, and Swedish.

Extras:
The Blu-Rays come in a nice cardboard book with plastic trays and an outer slipcover. The discs all have informative interactive features. In addition to the regular audio commentaries--of which there are six--there are two pop-up tracks you can turn on while you watch. "Boardwalk Chronicle" gives information on people, places, and history, while "Scouting the Boardwalk" shows how the production team finds locations to shoot and how they transform them to suit their historical needs. These tidbits, when the feature is turned on, are accessible through icons that appear on the screen while the show runs. "Scouting the Boardwalk" also appears as one 23-minute program on the last disc.

All eight episodes have a "previously on" option if you choose to watch them one at a time rather than as "play all." For those needing a refresher of what happened last year, "Season 3: Revisited" is a long recap hosted by show creator Terence Winter.

Disc 2 has a recording of the PaleyFest Q&A with Terence Winter, Howard Korder, and members of the cast, which took place after a screening of Episode Five. (26 minutes)

Digital copies of all the shows can be downloaded using an iTunes code or, for the self-punishing, the ever-unpopular Ultraviolet platform.

FINAL THOUGHTS:
It's all winding up to wind down in Boardwalk Empire: The Complete Fourth Season, a slower burn than the more grandiose Season 3, but no less intriguing. If you like gangsters, the roaring '20s, and the moral relativism that comes with both, this show should be on your radar. The all-star cast continues to grow and impress, and the stories stay fresh as the characters are put through their paces. Highly Recommended. 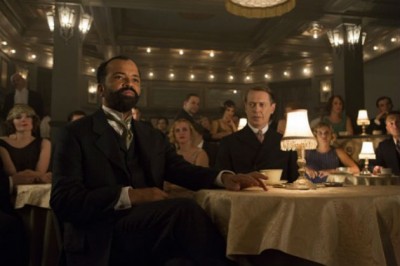