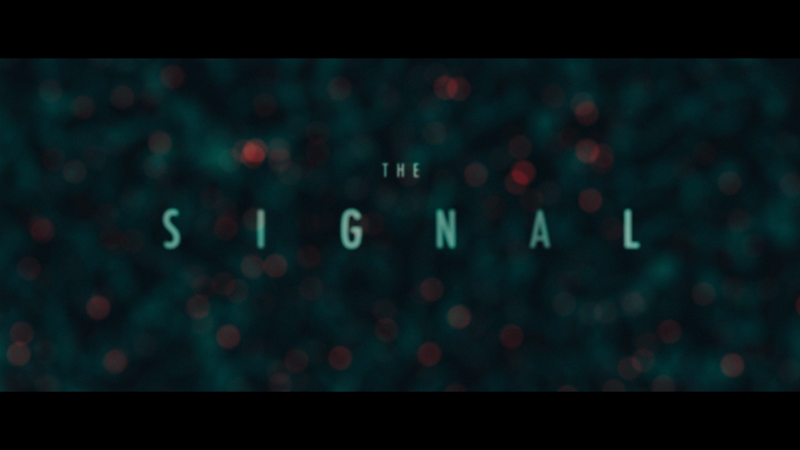 
The Movie
Director/co-writer William Eubank kicks off The Signal in somewhat unique fashion, starting his sci-fi tale of paranoia with a quiet sequence worthy of a young-adult book adaptation. The first 10 minutes set you up with the story of three friends on a peaceful road trip, complete with a gas-station stop, before sliding in a creepy undercurrent that blossoms into full-fledged horror. But just as things get really scary, they suddenly become Kubrickian, as Nic (Brenton Thwaites) finds himself sitting in a wheelchair in a stark white room across a table from Damon (Laurence Fishburne), who's wearing an airtight hazmat suit. And that's when The Signal really gets started. And despite taking 16 minutes in all to get to the point, not a moment feels wasted or slow.

Obviously something happened to Nic and his now-absent friend, and Damon wants to get to the bottom of it, asking a series of questions. It soon becomes clear to Nic that he isn't going anywhere anytime soon, and his analytical mind starts to try and piece things together from the few details he can gather in an attempt to escape. However, that's just one part of the story. There's a lot more going on here, most of which would certainly be considered spoiler material, and best left for the viewer to discover on their own. The plot unfolds economically, dropping bits and pieces of information throughout, though it leaves enough room to breathe and let a sense of dread and unease really settle in. 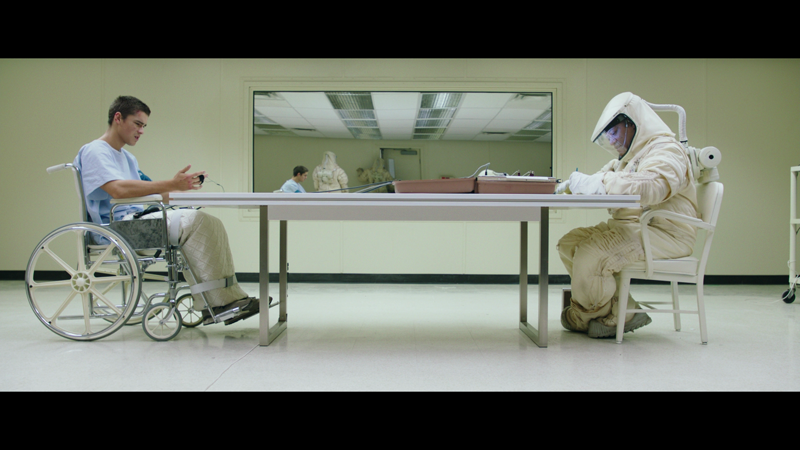 A low-budget flick, The Signal looks like anything but, with some really impressive special effects (if Nic was a Marvel or DC character, audiences would have lost their minds over several scenes) while Eubank (who's been a cinematographer for several years) delivers some truly stylish and affecting images, paying homage to things that have worked before, and creating some fresh new moments as well. The small cast is uniformly good, with Thwaites impressing as a guy in over his head, while Fishburne is Fishburne, lending the part the gravitas it needs to work. There are a few more gems in there, like the roles for Lin Shaye and Robert Longstreet, but again, the less known before watching, the better.

Though the film is fascinating and engrossing, as well as being beautifully photographed, it is ultimately disappointing, because the ending, which follows a breakneck building of momentum, offers no satisfaction. When the credits roll, you will be left with your own theories as to what happened (or, more to the point, why what happened happened) and there are no real answers. Certainly, The Signal is not the first sci-fi film to leave viewers with ambiguity as the movie fades to black (Shane Carruth has made a career out of that idea) but there's a somewhat uniform progression to the plot that requires a payoff (whereas some of those other films, like Upstream Color, live in that haze of mis-understanding.) When it comes time to say goodbye to The Signal, there's a temptation to say "That's it?" and start going through the catalogue of questions that remain unanswered, like "what made those marks?" and "what happened with the cow?" Perhaps in the sequel... 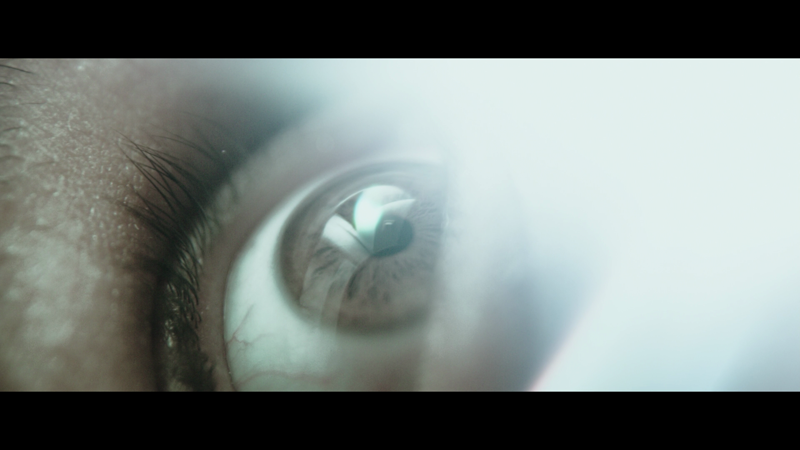 The Disc
The Signalarrives in a two-disc set (one Blu-ray, one DVD) packed into a standard Blu-ray keepcase that's wrapped in a slipcover that repeats the cover art. The disc's menu offers a choice to watch the film, select scenes, adjust the set-up and check out the special features. Audio options include English 5.1 DTS-HD Master Audio and 2.0 Dolby Digital tracks, while subtitles are available in English SDH, Spanish and French.

The Quality
The very wide 2.40:1, 1080p, AVC-encoded transfer on The Signal helps to faithfully reproduce the gorgeous, memorable visuals found throughout the film, delivering the film's varied palettes without issue, whether it's the beautiful travelogue of the early scenes, the disturbing starkness of the middle of the film and everything in and around those moments. BLack levels are nice and deep, and the high level of fine detail goes a long way toward establishing the "reality" of the situations, as you can absorb the main small bits that are found all over. Colors are appropriate for the moments, so much so that when color does "spike" (when dictated by the plot) it's a really eye-catching experience. Digital distractions are not a concern.

Sound, especially Nima Fakhrara's haunting score, is a massive part of the effect of The Signal, and the DTS-HD Master Audio 5.1 track delivers it in crisp, strong detail, with clean, easy-to-understand dialogue (when it should be understandable.) However, overall, the film is an example of less-is-more, populating sound where it's needed for the biggest impact, using a stick-and-move technique in terms of the center channel and the surrounds, as well as with the low-end, where moments of heavy bass punctuate important scenes.

The Extras
The first extra is a feature-length audio commentary by the Eubanks and co-writer/consulting producer David Fragenio. Perhaps it was naive, considering they made this head-scratcher of a film, but heading in, there were hopes that some things would be clarified a bit. They are not. The trio even joke about their lack of insight, describe one response by referencing David Lynch (famously un-forthcoming with secrets.) They do talk a lot about influences on the film, including spaghetti westerns, and compare the movie to the work of Spielberg and Tarantino, while also offering a good deal of production detail. Mostly it's a friendly track that shows their enthusiasm, though they get caught watching at points.

"Behind the Signal" offers a good look at the making of the film with a 9:22 montage of set footage. The camera floats around, observing, letting you see the production effort that went into several scenes, while also letting you get a small look at the personalities of those involved.

The last on-disc extra is "Brilliant!", which consists of a brief, yet amusing 18-second clip of Fishburne.

Also included is a code for a digital download/stream of the movie. 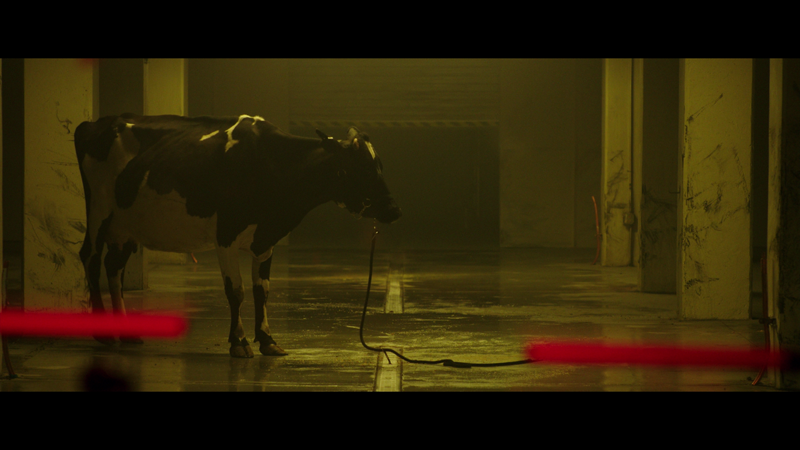 The Bottom Line
For the majority of its runtime, The Signal is a transfixing piece of sci-fi artistry, planting the seeds of questions into your brain via its entrancing imagery. Then, all hell breaks loose, and you're in the midst of a truly incredible superhero film, before finally, the wheels fall off, as the movie can't bring it home, leaving you frustrated at the lack of delivery on such extreme promise. The disc looks and sounds very nice, and offers a few extras, though they are as much of a tease as the movie. If there's ever a sequel that explains what happened here, I'll have to re-evaluate The Signal, but for now it's notable for two things: the debut of an impressive visual artist in Eubank and for what it fails to give us as much as for what it does.