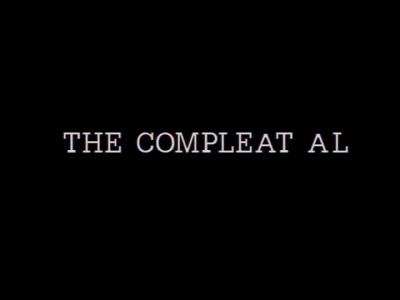 
The Movie
If the fine people at Everything is Terrible and The Found Footage Festival have taught us anything, it's that VHS was home to any number of bizarre releases, as companies took every opportunity to wring dollars out of the format's popularity. There's got to be tons of great material out there that's never been seen outside of magnetic tape, just begging for a second life as a DVD release. Until now, The Compleat Al, a mockumentary charting the life and career of comedy musician "Weird Al" Yankovic, has been one of those lost productions, but thanks to Shout! Factory, it's now available to own in a digital format, at a perfect time, as Yankovic's UHF celebrates its 25th anniversary and the musician celebrates the first number-one album of his career.

Telling the supposed story of Yankovic's life--growing up in suburban Lynwood, California, attending college to study architecture and eventually sending parody songs to Dr. Demento's radio show--the movie offers interviews with people who supposedly knew him when, including his real-life parents (who aren't exactly the finest actors to ever grace the screen.) Liberties are taken in telling his true biography, hitting true points, but supporting them with exaggerations and recreations starring the adult Yankovic. We also get a fictionalized version of how Weird Al became a recording artist, which may be the most forced portion of the film, as the character of Yankovic's ineffective manager, the nerdy Barry Cohen, is just too much to bear for as long as he's a part of the movie. On the plus side, we get to see some footage of Weird Al's mid-80s tour in Japan, which has a few neat elements, along with the same opening releasing logos and disclaimer as the original tape, a fun oddity to be sure. There are also interviews with the late Dick Clark and Phil Ramone, along with Rick Derringer, who mostly play it straight in discussing Yankovic. 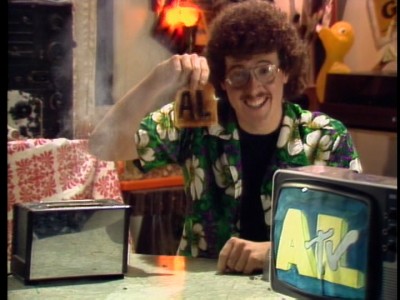 Cutting down on the Barry is the presence of eight of Yankovic's classic music videos: "Hey Ricky," an I Love Lucy-themed parody of Toni Basil's "Hey Mickey;" the ice cream-inspired Joan Jett parody "I Love Rocky Road;" "Eat It," playing off of Michael Jackson's "Beat It" and the Madonna homage "Like a Surgeon," along with clips for the original songs "Midnight Star", "This is the Life" (from Johnny Dangerously), "One More Minute With You" and "Dare to Be Stupid" (from The Transformers Movie.) The latter four go to show just how good Weird Al is when creating his own tunes, while "Like A Surgeon" is likely the best video of the bunch, a solid parody of Madonna's original video, but loaded with sight gags, making for an Airplane-style batting average. More of this would have been appreciated, especially when a cheaper video collection with three times the entries is out there for a little more than half the price of his release.

The other great part of this set is an extended section of clips from Yankovic's appearances on MTV, under the banner of AL-TV, supposedly representative of his pirate takeover of the network. It's rather hard to imagine that network, with its teen moms and teen wolves, allowing the decidedly non-teen Weird Al to grace their airwaves this way ever again, especially when you are reminded about how Catskills he could get in these specials, which included appearances by Harvey the Wonder Hamster and talk of strange subjects, like ancient astronauts. Thus, these clips will have to serve as souvenirs of a time long gone. In fact, that's the real strength of the entire The Compleat Al, which is powered by a sense of nostalgia for a time that once was, rather than a sense of what's really funny. 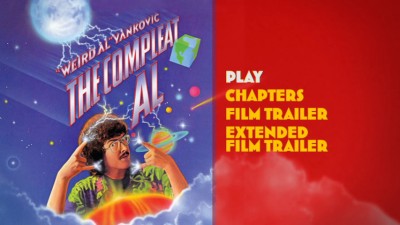 The DVD
Packaged in a clear, single-width keepcase with a dual-sided cover (featuring chapter stops and stills on the inside) The Compleat Al arrives on a single DVD, which offers a slightly animated, anamorphic widescreen menu with options to play the film, select scenes and check out the extras. There are no audio options and no subtitles or closed captioning.

The Quality
The film is presented in full-frame format, and overall, it looks better than you might expect, especially from a distance, but this is still a movie made for VHS. Aliasing is persistent, video noise and minor dirt and damage is ever-present and there are frequent compression artifacts, but looking at the film, which uses a number of different sources across its run-time, including film and video, it's apparent that the problems aren't consistent, and seem to be tied to the origins of the content used. Color is solid, but, like everything else thanks to the film's construction, can vary from scene to scene, and fine detail isn't very high, aided by a lack of sharpness found throughout.

The Dolby Digital 2.0 audio track is just what you'd expect considering the era in which the film was made, which means you're getting a straightforward presentation with nothing separated between the two channels. The music and dialogue are both strong and clearly delineated, so there are no issues there, with no distortion present.

The Extras
The only extras available are a pair of trailers for the film. One is a quick 32 second promo, delivered with all the bombast you'd expect, while the other expands that ad to 5:18, by including interviews from the film. Nothing here can't be found in the movie itself. If only we could have gotten our hands on a few videos that weren't in the main feature. 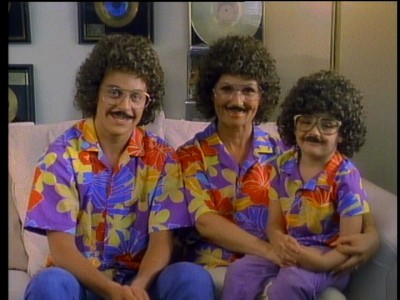 The Bottom Line
While it's mostly entertaining and the inclusion of eight classic Weird Al videos is great, this is a show that's really for die-hard Yankovic fans, as the sense of humor leans toward the cheesier side of his comedy, with much of the mockumentary offering what can be described as dad humor. The bright spots, including the footage from Yankovic's MTV takeovers, are well worth watching though. The presentation is solid for a DVD reproduction of a nearly 30-year-old VHS special, bit nothing much has been added to encourage a purchase. If owning good copies of Weird Al videos and some AL-TV segments are important to you, this is a worth adding to your collection, but otherwise it's a luxury item.