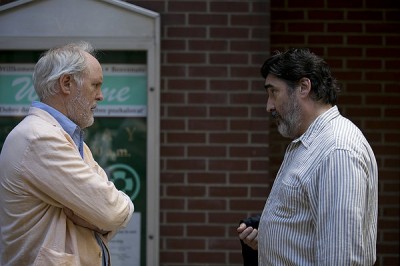 Love is a hearty beast. Love is also sad. And infuriating. Occasionally heartwarming. Even isolating. It's also hard. That's actually a better title for Ira Sachs' new movie. Love is Hard. In fact, any of those descriptors would have made for a better title than Love is Strange. Because there is nothing particularly strange about the relationship between John Lithgow's befuddled elderly painter and Alfred Molina's understanding music teacher. Life takes some unexpected and heartbreaking twists for them, but there is nothing strange about their union. Nor how it connects the people in their lives.

George (Molina) and Ben (Lithgow) are partners of thirty-nine years who, under the new laws of New York City, can finally tie the knot in the eyes of the law. Love is Strange opens with their wedding: a modest, yet happy, affair. It then follows with a gut punch. George works as music teacher for a private Catholic school. During his employ, he has been open about his homosexuality. He works there because he is a man of faith. Unfortunately, the public nature of the wedding ceremony means the Archdiocese has caught wind of it, and they believe George to be in violation of a pledge he signed when he was hired. He is summarily dismissed, causing a financial hardship that forces the two men to sell their apartment and seek other options.

While they look for new digs and a new job for George, he crashes with their neighbors, a pair of gay cops (Cheyenne Jackson and Manny Perez), and Joe moves in with his favorite nephew (Northern Exposure's Darren E. Burrows) and his family (Marisa Tomei plays his wife, Charlie Tahan his teenaged son). Neither situation is ideal. The cops like to party too much, and since Kate (Tomei) works at home, Joe is constantly in her way, as well as in everyone else's business. All involved struggle to make the best of it, but the longer the displacement continues, the more nerves become frayed.

Sachs, who co-wrote Love is Strange with Mauricio Zacharias, has crafted an erudite portrait of later life. Older couples, gay or straight, aren't exactly common in Hollywood movies, but here the filmmaker eschews the usual "old people are funny" routine for an emotional, insightful look at what it means for two aging men to have endured together so long only to be separated by happenstance and bad luck. The separation is burdensome for their friends and family, but moreso for them. The change in comfort and routine takes its toll. Forget the semi-quirky indie vibe of the trailer; Love is Strange is more of a fugue. 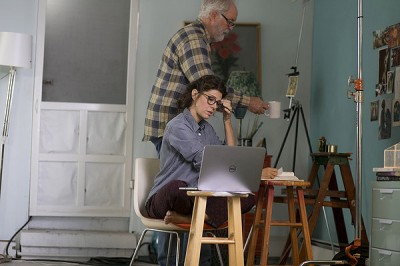 Which can make it somewhat tough going. Sachs has constructed his film almost more like a musical number than a traditional narrative. It's about mood and feeling, with different motifs rising and falling and intertwining. The ultimate takeaway seems to be that love can strike at any age and it either holds strong or it crashes and burns, alternately bringing peace or distress. Joe's nephew and his wife are struggling to maintain their connection, while their son is only about to discover what it means to care for someone. Arguably, it's the constants that teach you more, the folks who stick around and encourage you to carry past the initial brush of passion.

Not that this is ever explicitly stated. Sachs actively avoids getting too neat and tidy with Love is Strange, which puts a lot of faith in the audience to glean what it will from what is there. I'm not sure it's altogether satisfying. The finale has some emotional weight, to be sure, but I could have done with a few more character moments and less longing montages of the New York City skyline set to orchestral music. More specifically, I could have done with more scenes featuring George and Joe together. The movie so quickly splits them apart, you don't really know how good Molina and Lithgow are as a duo until very near the end, when the two men go out for the night. Watching them lovingly banter and reminisce--and more importantly, laugh--over drinks makes you realize exactly what the movie has been lacking all this time. We are seeing the struggle to maintain, but not necessarily what it's all for.

It's kind of a frustrating misstep, especially with two actors of this caliber. The casting in Love is Strange is exceptional from top to bottom, actually. How wonderful to see Marisa Tomei in such a sedate role! She can be the rock upon which any drama can build its emotional stability. As a supporting player, she does exactly what is needed, providing support without detracting from the leads.

Maybe it really is the title that's the cause of my hang-up. Maybe it's creating the wrong kind of expectations. Far be it from me to decry the atypical, when too often movies are so predictable and obvious. Sachs has a unique perspective, and he is already points ahead, as mentioned, for avoiding the usual romantic couplings. But Love is Strange maybe needed a little more in terms of traditional character arcs, something to make it as narratively satisfying as it is emotionally compelling. Because there is a wonderful movie in here, beautifully acted and sincerely crafted, just one that's slightly short of its potential mark. 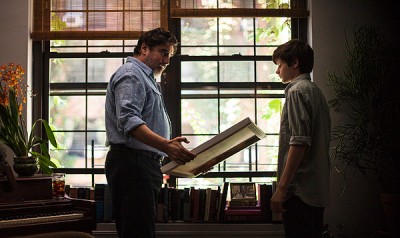