(The Skipper) "We've got a brand new story, about the Castaways!"
(Ginger) "We left our tiny island after years and months and days!"

(The Professor) "We built a little spaceship. It's crude, but it could fly!"
(Lovey Howell) "We left for home, and lost our way, between the stars and sky!" (Thurston Howell III) "We went from an island, to a star, lost on Gilligan's Planet!" (The Skipper) "Gilligan and Skipper, the millionaire, his wife!"
(Mary Ann) "The Professor, the movie star, and Mary Ann began a brand new life!" (The Professor) "What creatures we encounter? What riddles do we face?"
(Lovey Howell) "What mysteries now haunt us, in a strange, enchanting place?" (Thurston Howell III) "Our adventures are the best by far..."
(Gilligan) "Here on Gilligan's Star!" (All) "Planet!"
(Gilligan) "oh, yeah...."

It had me at the theme song. Warner Bros.' Archive Collection of hard-to-find library and cult titles has released Gilligan's Planet: The Complete Series, a 2-disc, 12-episode collection of the one-off Filmation Saturday morning toon that originally aired on CBS during their 1982-1983 season. A milestone of sorts for Filmation--it was the company's last for Saturday morning network television--Gilligan's Planet didn't turn out half-bad for this Gilligan fan, with (most of) the original cast present for the voice work, some eye-catching backgrounds, and believe it or not, a few funny one-liners. No extras for these sharp, colorful fullscreen transfers. 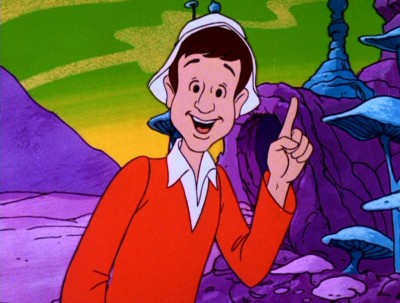 You can't figure out what this is about? The Castaways build a rocket ship; they escape Gilligan's Island...only to be stranded on Gilligan's Planet, where well-meaning but bumbling Gilligan constantly ruins their rescue chances. 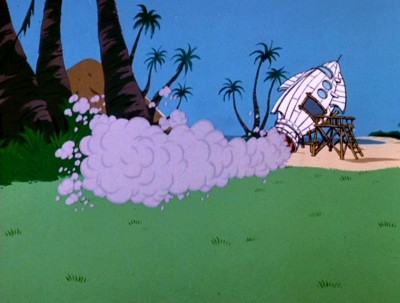 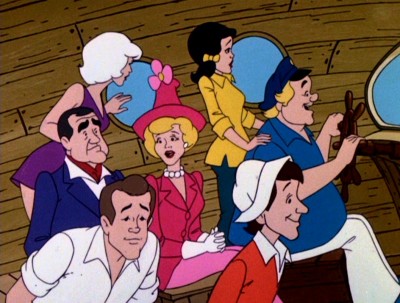 When Gilligan's Planet debuted in the fall of 1982, I was in high school and working a weekend job, so me and and Saturday morning toons had pretty much taken a permanent break by that point. Now I'm not saying I didn't catch the occasional Bugs Bunny short, or peek in on Scooby-Doo when I was eating breakfast (who don't love some Scrappy Doo?)...but times were different for a guy back then: you didn't admit to watching cartoons after the age of about 10. And you can bet your ass I didn't let the old man catch me doing it, or sure enough the merciless ribbing would start...as well as heated yowls that if I had time to waste watching a half hour cartoon, then I damn sure had time to mow the lawn or weed the flower beds or paint the shed or shingle the roof or pour a new concrete driveway (in today's increasingly infantile world, where adolescence now seemingly extends well into men's 50s--women are too mature and too busy for this nonsense--toon watching, apparently, is no secret to be ashamed of). So even though I had every episode of the original Gilligan's Island memorized by the time I was 8 years old, and I was a loyal watcher of 1974's The New Adventures of Gilligan, the first animated variation of producer Sherwood Schwartz's indefatigable Castaways, I missed Gilligan's Planet completely (to be honest, I had never even heard of it before the discs showed up here). 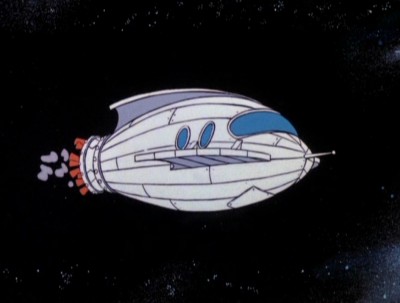 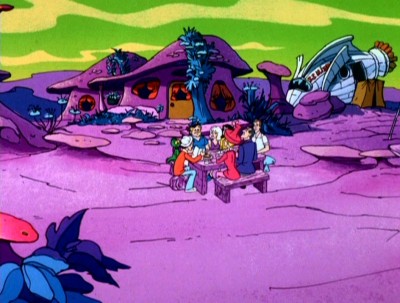 Now, I've written many times (and very fondly) about Filmation toons and their live action Saturday morning shows (four decades later and I still find myself at the oddest times, for no reason whatsoever, mumbling, "Everything's Archie!", and as for oh mighty Isis, well...someone call Dr. Welby stat for this cardiac patient). And while I can spot the Filmation house style from a mile off, I'm certainly no expert on their canon. From what I could dig up on Gilligan's Planet, it was notable chiefly for being Filmation's final product produced exclusively for one of the "Big Three" networks. Filmation, the only serious competition to Hanna-Barbera in the Saturday morning toon races of the 1960s and 1970s, had found itself by the early 80s increasingly marginalized by the economics of the business, as well as from falling ratings for its shows. A noble decision to maintain its animation facilities here in the United States (the lone exception was Zorro) kept its production costs too high to compete with its rivals, who were outsourcing to cheaper foreign producers, and thus undercutting Filmation's asking prices with the networks. As well, an overall drift in their programs' ratings' fortunes--begun with the expensive mega-flop Uncle Croc Block for ABC in 1975 that got Filmation banned from all future ABC Saturday morning schedules by Freddy "The Man With the Golden Gut" Silverman--saw the other two major networks contemplating cutting ties with the company, as well: a death blow for Filmation from which it would never have recovered had it happened. Luckily for Filmation (in the short run, at least), a move away from its tried-and-true movie and TV adaptations, like Gilligan's Planet, and into first-run syndication with the massively successful sword and fantasy He-Man And The Masters Of The Universe, kept the studio afloat for a few more years until the cycle again repeated itself and the studio was finally shuttered by a corporate buy-out. 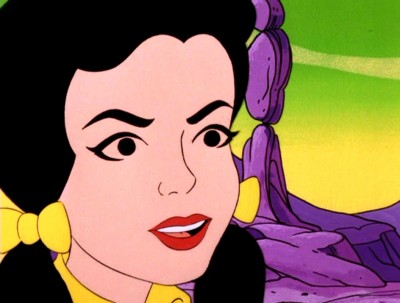 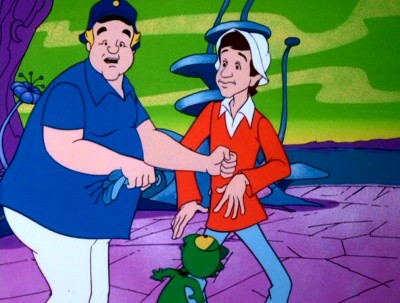 Which leaves us with Gilligan's Planet, which I must write...wasn't nearly as bad as I had feared. I've written before about how difficult it can be as an adult to revisit toons that were made decades ago: some will hold up forever (Looney Tunes, of course; old Popeyes and Tom and Jerrys, Fat Albert and Scooby-Doo), while some just don't make it (by mere chance I caught a U.S. of Archie episode on Me-TV the other day...I lasted all of two minutes). I'd doubt I'd watch Gilligan's Planet again, but it certainly wasn't painful. Obviously the biggest advantage here is having almost all of the original cast on board to do the voice work. Some of the line readings are, um...interesting, to say the least. Alan Hale, Jr. frequently speaks as if he's slowly reading a grocery list over the phone, while there's an undeniable, mean irritation to Dawn Wells' Mary Ann (augmented by the classic Filmation limited animation scam of having Mary Ann's head fill the screen, motionless, while she stares at us with those spooky, angry eyes of hers). And she's hopeless as blonde-haired Ginger (necessitated by predictably recalcitrant Tina Louise refusing to have anything to do with the only project in the world that elevates her otherwise totally irrelevant acting career out of complete anonymity). Jim Backus and Natalie Schafer sound just as they always do--hilarious--while Bob Denver still managed to crack me up in the opening theme, when he dejectedly heaves, "oh, yeah..." after successfully rhyming with Mr. Howell...and yet still screwing up the song (Russell Johnson, as an afterthought, is pretty subdued here). 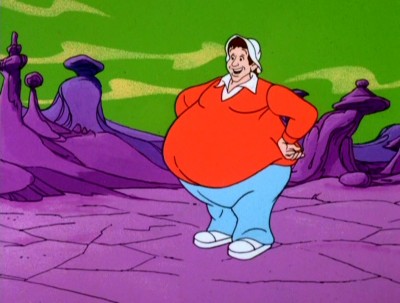 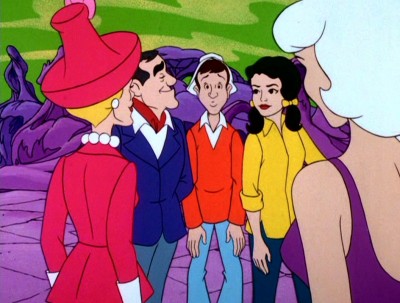 All the familiar Filmation dodges are here: the laugh track, the recycled rotoscoping (it was amusing to see Fat Albert re-purposed into Gilligan at one point), the long, pointless pans and other filler like multiple scenes of characters running to nowhere to kill time, and of course the dead eyes staring into the camera. The Filmation "walks" are here (Skipper struts like a combination of Oliver Hardy and Super Fly), while the backgrounds feature excellent color-saturated designs and good creature work (it may be limited animation...but the overall design work is quite nice). The dynamics of the original sitcom are pretty much intact, although I miss the Skipper wailing on Gilligan, a deviation no doubt demanded by all the non-violence activists and parent/teacher advisory councils at that time (yes, and look what a fine job those morons did by today's society when they gutted Saturday morning toons and eventually killed it off--it's great out there now with all the little angels running around creating general mayhem. Thanks, useless do-gooders!). But the one-liners aren't too bad (the actors help); when little alien Bumper jumps on Mr. Howell's lap on the new S.S. Minnow, a deeply offended Mr. Howell thunders, "I say, who let the rabble into First Clahss?!"--classic Howell. All in all...not bad for Filmation's network swan song. 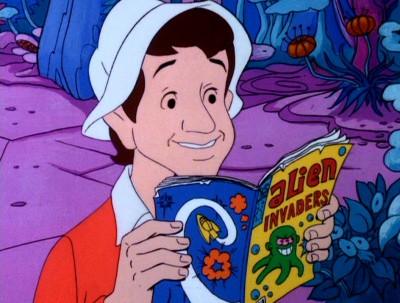 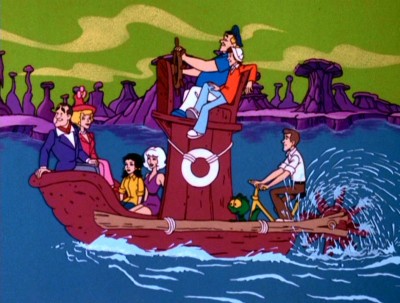 The Video:
The fullscreen, 1.37:1 color transfers for Gilligan's Planet: The Complete Series look good, with solid, saturated color, a sharp image (maybe a tad dark), and few if any imperfections...except the ones made during the typically sloppy Filmation animation process.

The Audio:
The Dolby Digital English mono audio track is healthy, with little hiss. No subtitles or closed-captions.

The Extras:
No extras for Gilligan's Planet: The Complete Series.

Final Thoughts:
In one episode, Skipper asks Gilligan, "You know what I miss most about Earth?" to which Gilligan responds, "Saturday morning cartoons?" Exactly, Gilligan, exactly. Not nearly as bad as I thought it would be, the brightly-colored, mostly amusing Gilligan's Planet: The Complete Series--featuring most of the original sitcom cast--comes recommended.