Coming Home is proof that, then and now, attempting to return to normal life after combat duty is pure hell.

As one of the few feature films to go into the psychological toll of returning war vets, the 1978 Vietnam War-era drama ended up as the most acclaimed work from maverick director Hal Ashby (Harold and Maude; Shampoo). Ashby sympathetically guided Jane Fonda and Jon Voight to win Oscar awards for their stunning lead performances, a happy byproduct of the time when movies were both auteur-driven personal visions and mass hits. You could also view Coming Home as Fonda's elaborate way of saying "I'm sorry" to the Vietnam vets who branded her as a traitor for her anti-war protests (the actress co-produced), although that's perhaps the least interesting aspect of this stirring, still very relevant film. Kino Lorber's Studio Classics Blu Ray presents the film in a solid high-def image while retaining the bonus content from the 2002 DVD edition.

Hal Ashby had this great ability at doing scenes so intimate and real, they often felt more like documentaries than scripted affairs - Coming Home is no different. Set in 1968 and evocatively scored to rock 'n roll music of the era, the story is a basic love triangle between Bob Hyde (Bruce Dern, also excellent), a starchy Marine officer, his yearning wife, Sally (Fonda), and the bitter paraplegic vet she's caring for, Luke Martin (Voight). As the story unfolds, each character has a bit of an epiphany about war and themselves. After Dern's Marine Captain is assigned to fight overseas in Vietnam, Fonda's docile Sally is left looking for something to occupy her time at the Pacific military base where they live. Inspired by her bohemian friend, Vi (Penelope Milford), Sally volunteers at the local VA hospital, performing menial tasks like serving orange juice to the disabled veterans. Sally recognizes a particularly combative patient, Luke Martin (Voight), as one of her old high school classmates and attempts to strike up a friendship. Witnessing the indifference he and fellow vets have gotten from society has made Luke a bitter, alienated man, but Sally's gentle encouragement allows him to open up and have some hope. They eventually fall in love, although Sally struggles to find a way to tell her husband when a furlough in Hong Kong allows her to reunite with Captain Hyde. Meanwhile, the suicide death of Vi's mentally damaged veteran brother Billy (Robert Carradine) prompts Luke to stage a protest at the base. Upon Bob's return to U.S. soil, the Hydes attempt to patch up their marriage while Luke is emboldened to become a spokesman for veteran's rights.

Because it deals with the essential fact that returning veterans have it hard, regardless of the specific conflict they fought in, Coming Home has a timelessness lacking in a lot of other war-related films. The use of real Vietnam vets as extras - and allowing them to speak their minds in unscripted moments - gives it a bracing immediacy, which is helped by the (then) novel use of prerecorded '60s music to subtly comment on the onscreen dramatics. Ashby's sympathetic touch never gets preachy or strident, leading to some solid, beautifully done performances (not just from the lead actors). 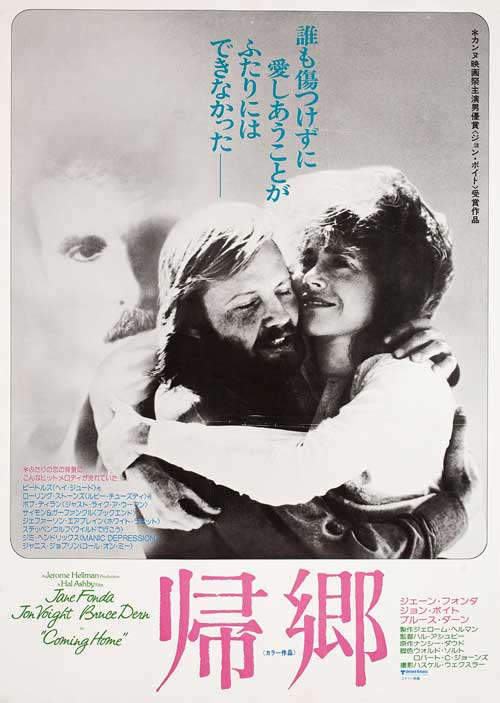 Kino Lorber's Studio Classics Blu Ray edition of Coming Home supplants the DVD edition issued by MGM-UA in 2002. Besides the improved picture quality, this particular release uses graphics from the movie's original theatrical campaign on the cover and disc menu (a huge improvement over the bland 2002 design).

The Blu Ray's 1.85:1 HD image serves as a good showcase for Haskell Wexler's soft, grainy photography. Wexler's deliberately muted color palette and carefully chosen, filtered lighting setups look warm and inviting - dark areas in particular come across as rich without looking too murky. Bits of dust and white spots show up very occasionally on this somewhat aged print, but for the most part it's a fantastic, pleasantly calibrated transfer.

The film is presented with its original mono 2.0 mix which has little in the way of distortion. Musical selections are pleasantly blended in with dialogue and special effects - there's a lack of bottom in the pop songs that play throughout the movie, although I found the mixing job nice and unobtrusive. Optional English subtitles are also provided, although the French and Spanish-dubbed soundtracks from the 2002 DVD edition are missing here.

Nothing new, although it's nice that Kino Lorber held on to the bonus material from the 2002 DVD from MGM-UA. A feature-length Audio Commentary from Voight, Dern and director of photography Haskell Wexler has the three (recorded separately) enthusiastically discussing the production and (from Wexler) the peculiarities of setting up and lighting certain scenes. Presented in standard definition, the featurettes Coming Back Home and Hal Ashby: A Man Out of Time have the same trio from the commentary offering reminiscences of Ashby and the uniqueness of the film. Fonda's presence is missed, but they're both worthwhile. The original Theatrical Trailer, which emphasizes the sexual aspects of the story over everything else, rounds out the extras.

It may deal with the long-ago Vietnam War, but Coming Home resonates just as strongly today with its sympathetic portrayal of war veterans adjusting to non-combat life. This key film from the '70s benefits from strong performances by Jon Voight, Jane Fonda and Bruce Dern under Hal Ashby's deceptively casual direction. Besides the higher-resolution image, Kino Lorber's Blu Ray edition doesn't add anything new, although a drama this good doesn't need anything new. Highly Recommended.