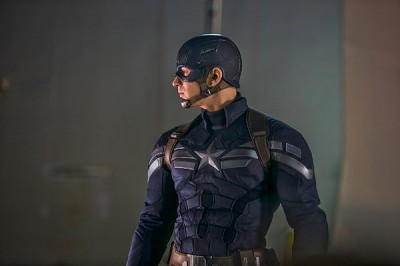 Captain America has the weird distinction of being Marvel Comics' most solid movie franchise, but also, at least initially, its least memorable. Turning one of their most vanilla characters into a bankable action star proved difficult the first time around. Second time's the charm. (Third if you count The Avengers.) Plenty of people remember Steve Rogers now.

Despite some of its more rickety story elements, Captain America: The Winter Soldier is possibly the studio's best action film and the one most able to stand on its own since the original Iron Man (or, at least it was until Guardians of the Galaxy stole the summer's thunder). So much so it makes you sorry sometimes when they shoehorn in a little connective tissue to keep the shared universe turning. It's not that the insertions are done badly, it's more it just would be nice to leave it alone to do its thing.

Based on a series of comics written by Ed Brubaker (who appears in the film to watch his character get his mind wiped before the third act), The Winter Soldier sees Captain America (Chris Evans) further grappling with the murky world of modern-day espionage. The clear-cut good guy/bad guy conflict of WWII has been lost to new technology, international politics, and the kind of wetwork that kept the Cold War boiling.

Cap finds himself wondering whom to trust when S.H.I.E.L.D. head honcho Nick Fury (Samuel L. Jackson) is sidelined just before a big surveillance project goes online. Can he bash bad guys with Black Widow (Scarlett Johansson)? Is his new boss (Robert Redford) really on the level? And who is that masked assassin (Sebastian Stan) with the metal arm and the retro grunge hair?

Captain America: The Winter Soldier is fairly standard black-ops fare. The execution, however, is a cut above. Brotherly duo Anthony and Joe Russo (TV's "Community") bring a looser, Bourne-inspired style to this less-super superpowered story. Outside of the addition of the Falcon (Anthony Mackie, The Adjustment Bureau), none of these costumed adventurers can fly. It's just enhanced strength, exceptional agility, crazy high-tech gadgets, and good old-fashioned pounding the stuffing out of each other. 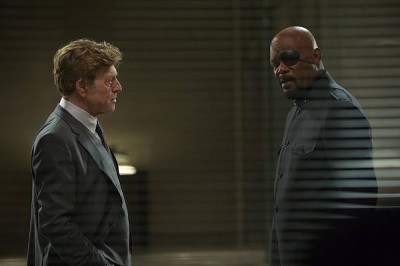 Where writers Christopher Markus and Stephen McFeely (Thor: The Dark World) really get to flex their own special abilities is in the character interactions. Seeing Cap and Black Widow banter about his dating life, for instance, plays on the established chemistry between Evans and Johansson, working both the humor and the inherent pathos that defines their roles. That Mackie and Redford both effortlessly slide into this established dynamic is testament to what skilled performers they are. There is also some nice continuity to having the same writers return from The First Avenger to craft its sequel. There are plenty of parallels and callbacks here. Having just watched both films back to back, each for a second time, I not only appreciated the original more, but enjoyed how they connect. There is a poignancy to how Cap is nearly killed in the climax, and to how he is saved, that should only add to the weight the do-gooder is already carrying as future installments come rolling out.

The writers and their directors mesh particularly well in lacing real-world concerns into this obviously unreal scenario. There is very little obfuscation in terms of what The Winter Soldier is really about. The nature of Hydra's plan to take over the world by sowing chaos and creating an atmosphere of fear is meant to have echoes of the current state of affairs on our side of the screen. Captain America's old-school patriotism is juxtaposed nicely against the complicated macro-politics of the 21st Century. It's easy to dismiss what he believes as simplistic, but not so easy to refute that sometimes right and wrong is as simple as it needs to be. (It's not a partisan message, either, despite how opposing news forces tried to spin the movie in their direction upon its initial release.)

What gives The Winter Soldier weight and helps it transcend polemics is how the creative team ties the geopolitical slant to interpersonal relationships. The common theme here is friendship and trust. You'll hear both words a lot. Who do you trust? Who is a friend? More than lip service, it's cemented in action. The heroes take care of each other just as much as they take care of the people on the ground.

Some have used Captain America: The Winter Soldier's final scenes as a cornerstone for complaining about the formulaic endings of superhero movies and the need to consistently make them louder and more explodey. ("Things crashing into other things" is what Matt Zoller Seitz called it.) In a way, this is a bit like complaining about there being a gunfight at the end of a western. If Gary Cooper doesn't meet Frank Miller in the street at the close of High Noon, there ain't much reason for that clock to strike twelve. The saving grace of The Winter Soldier, and why it crashes this criticism down along with everything else, is that there are clear goals, each character has an individual mission, and so the sense of purpose is never lost, the action is always clear. (Again, there is also some symmetry with the first movie, where Cap had to take down the Red Skull's ship, and accept his own possible end to do it. What is it with your death wish, Steve Rogers? You don't have to sacrifice yourself all the time!)

Such concerns won't likely come to mind when you watch Captain America: The Winter Soldier, however, as it's too facile and too fast and just too damned entertaining to stop and ponder the philosophical roses. Which is how superhero stories work best: escapist fantasy first and foremost, cultural critique second. Hydra may want you to be so scared that you'll give them your allegiance, but the best comic book creators would rather excite you into getting you on their side. 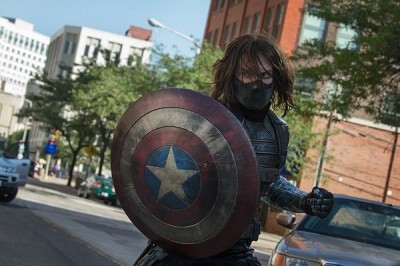 Note: Portions of this review originally appeared in shortened form in The Oregonian when the movie was released theatrically. You can read the original version here.

Video/Sound:
DVDTalk only received a single disc of Captain America: The Winter Soldier for review. Absent of any packaging we can only guess as to whether this is the same as the disc you will buy retail, though chances are good as it was also absent of any promotional watermarking.

If so, you'll have little to quibble over if you pick this one up for your collection. The 1080p AVC-encoded transfer is killer, with an impressive clarity and a large amount of detail. Resolution stays sharp throughout, with beautiful colors and rich texture. No evidence of noise reduction or other digital problems were apparent.

The main audio is mixed in 7.1 DTS-HD Master Audio for you big audio heads out there. This did not disappoint either. There are lots of effects that ping around the room, creating a full depth of sound that puts you right in the action.

Alternate language options include Spanish and French in 5.1, and a descriptive English track in 2.0.

Extras:
The special features are predictable but otherwise well crafted, led by an informative audio commentary featuring the directors and writers. The discussion ranges wide, taking in comic books, spy movies, and the general discussion of how The Winter Soldier came together.

"On the Front Line: An Inside Look at Captain America's Battlegrounds" is your basic making-of featurette, running about 10 minutes. There are additional brief, lighthearted segments called "On Set with Anthony Mackie: Cut the Check!" and "Steve Rogers' Notebook." The former is a bit of goofing around with the Falcon, the latter a look at the notes Cap makes and how they had to be changed up for different markets.

There is also a quartet of deleted scenes and a 3-minute gag reel.

FINAL THOUGHTS:
Highly Recommended. One of the biggest films of 2014 gets the high-quality Blu-ray release it deserves. Captain America: The Winter Soldier is a genuine crowd pleaser, providing laughs, emotion, and thrills, while also giving a little more depth than your standard superhero movie. It's also the rare sequel that bests the original, ironing out some of the clunkier flaws of The First Avenger. Hell, The Winter Soldier even wins at being better on second viewing. Just go get it already. 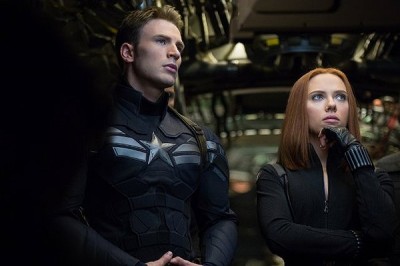