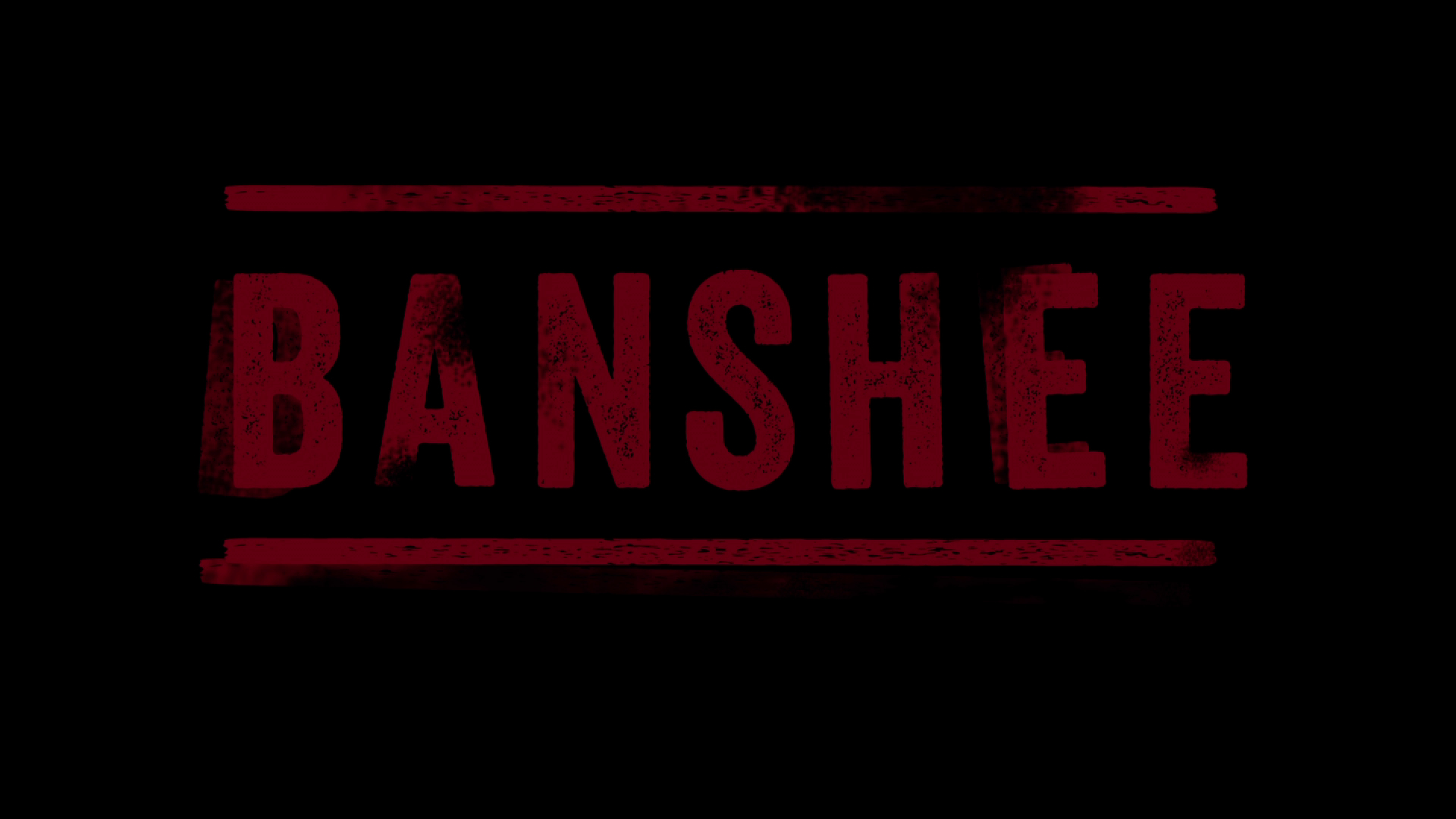 Pulpy Pennsylvania noir Banshee returns for a slightly more focused second season, though the rampant violence, gonzo characters and campy thrills continue. Season One introduced Lucas Hood (Antony Starr), a former convict who assumes the name and title of the incoming sheriff of Banshee, Pennsylvania, that was killed in a bar robbery. The first ten episodes throw a lot at the viewer, including scorned gangster Rabbit (Ben Cross), also the father of Hood's former partner and lover Carrie Hopewell (Ivana Milicevic). There's also ex-Amish businessman and criminal Proctor (Ulrich Thomsen), who scraps with Native American casino owners for control of Banshee. Everyone without a bullet in their skull returns in season two, which focuses heavily on Hood's everyday work as sheriff and the illicit power struggles going on behind the scenes in town. The show is compulsively watchable thanks to a breakneck pace, generally interesting characters and a strong principal cast. Banshee has settled in but has not settled down, and this second outing is a strong continuation of the action.

The second season opens as Carrie reports to jail for her role in the shootout that killed a bunch of Rabbit's men but spared Hood. Her family is in turmoil. Carrie's district attorney husband, Gordon (Rus Blackwell), tries to understand why she lied about her father and criminal background, and daughter Deva (Ryann Shane) blames Carrie for tearing the family apart. Hood moves on to romancing Deputy Siobhan Kelly (Trieste Kelly Dunn), who accuses him of playing by his own rules. Rabbit is missing, and hacker Job (Hoon Lee) tries to track him down while Hood engages in a dangerous dick-swinging competition with Proctor, who has increased both his empire and physical strength. Rebecca Bowman (Lili Simmons) renounces her Amish faith to join Uncle Proctor in the family business, but realizes her mistake when he proves unafraid to take a life on a whim. Indian tribal chief Alex Longshadow (Anthony Ruivivar) also tangos with Proctor and considers whether or not he should join forces or burn down Proctor's crops. 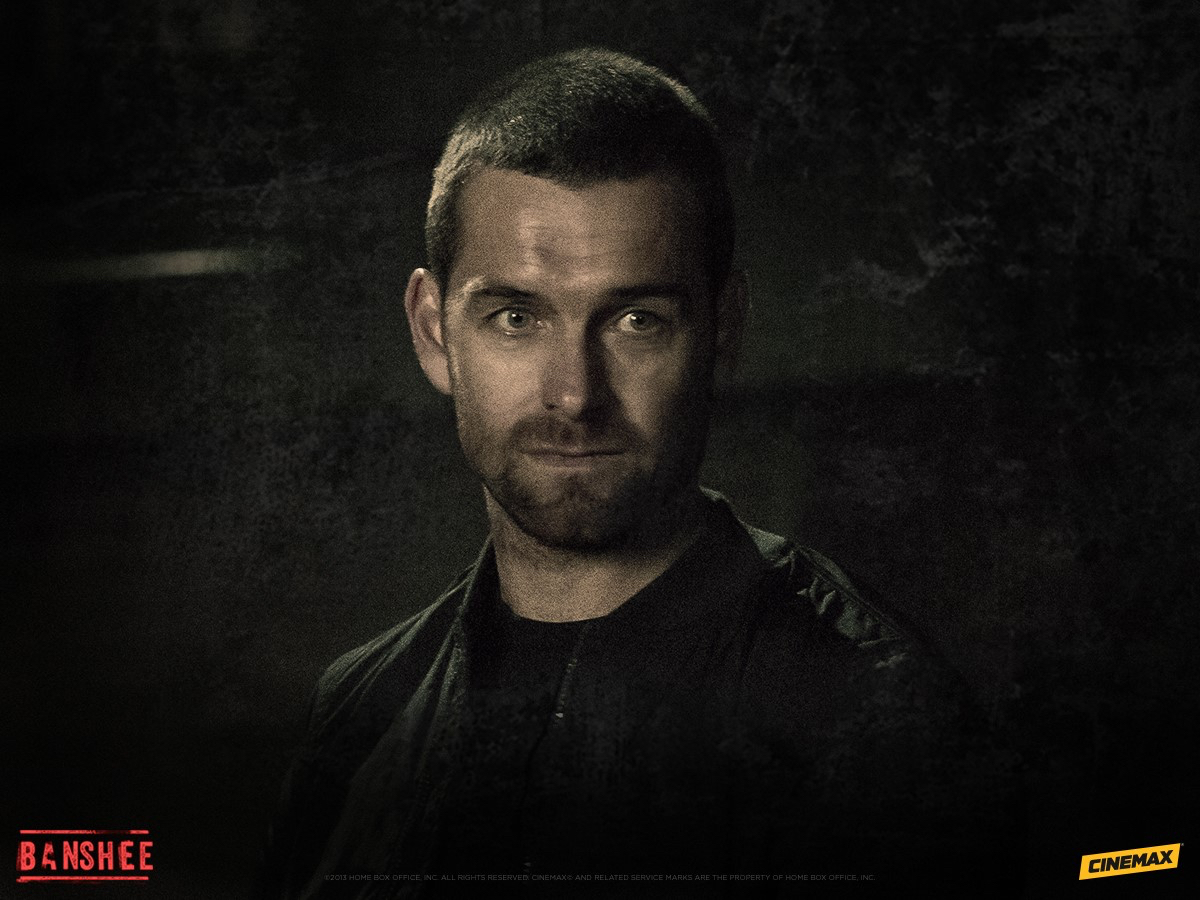 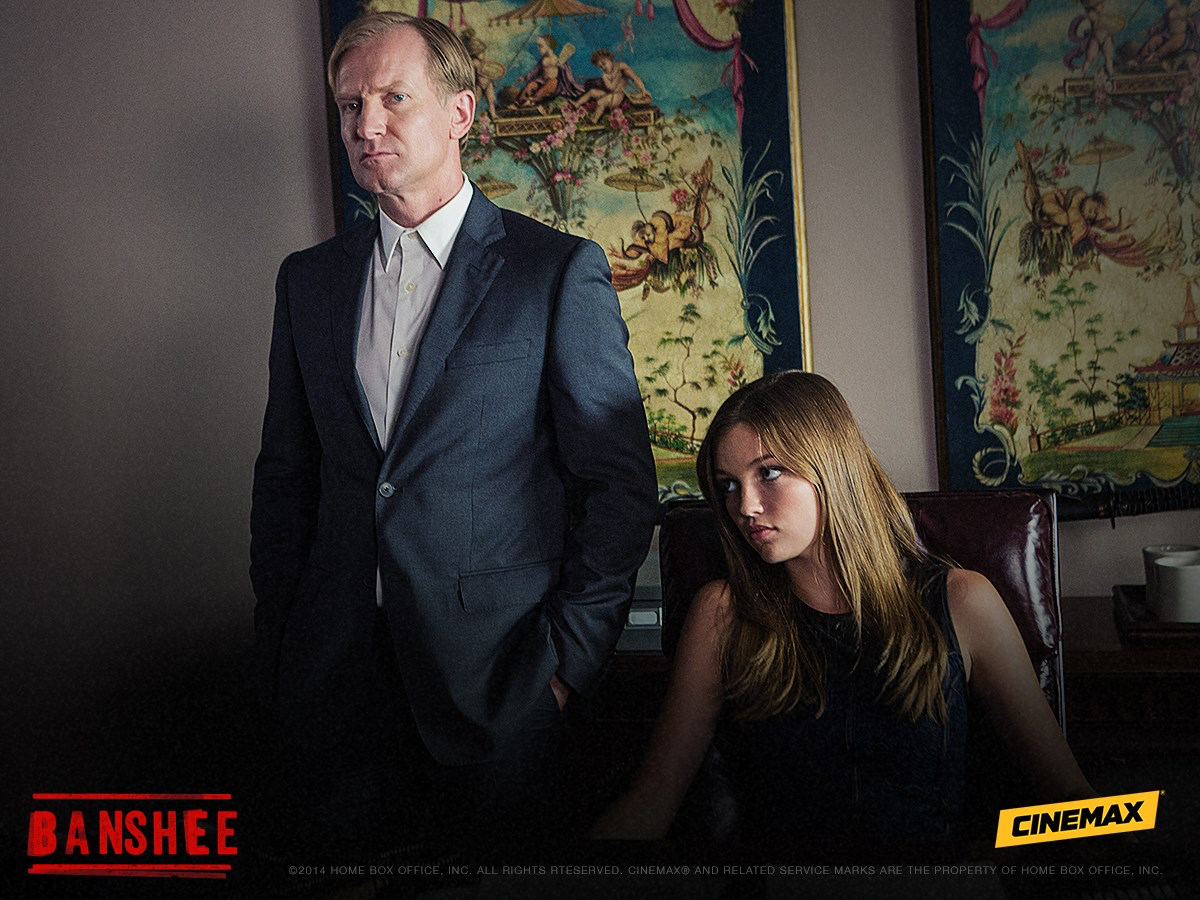 Banshee, Pennsylvania, may be the most insane (fictional) small town in America. There are three full-scale mob operations, an imposter sheriff, violent skinheads and all the gaffe and corruption you could want. Cinemax's show retains the elements of film noirs, heist thrillers and some of the camp I enjoyed last season. Season two is less reliant on extended flashbacks to tell its story, which is a good thing. The hunt for Rabbit is ongoing, but Carrie's family drama and Hood's tenuous reign as sheriff are given greater focus. The familial melodrama could have been off-putting, but Banshee gives it a nice twist. Gordon starts boozing at the local strip club, which leaves rebellious Deva to watch her brother, Max (Gabriel Suttle), after Carrie is kicked out of the house. Max's old asthma-attack-as-plot-catalyst returns in season two, but is less annoying this go-round. Speaking of the strip club, it is the frequent hangout for all of Banshee's lowlifes, and more than once produces witnesses for murder, theft and trafficking. Proctor often stops by when not working out or sexually harassing his niece, and the writers worked hard to make his character really scummy this season.

Hood and Carrie spend a lot of time apart this season, but there is a great episode midway through the season where the pair returns to the home they were to share before Hood went to jail. The drama is surprisingly effective here, as is the intense bloodshed that follows. Banshee still has the tendency to insert characters and plot lines only to leave threads hanging, but this is not a fatal flaw. I like the direction the show is going, though the writers place undue emphasis on Longshadow and company without giving the Native Americans many scenes or much compelling drama. In my review for season one, I wrote that I hoped the second season would give me a reason to like Hood. I think it has. There is less bed-hopping and criminal activity for the good sheriff, who instead focuses on protecting Banshee's citizens. Hood is still rough around the edges, but at least he has a cause. Banshee risks imploding by packing so much into each episode, but so far things are running smoothly. 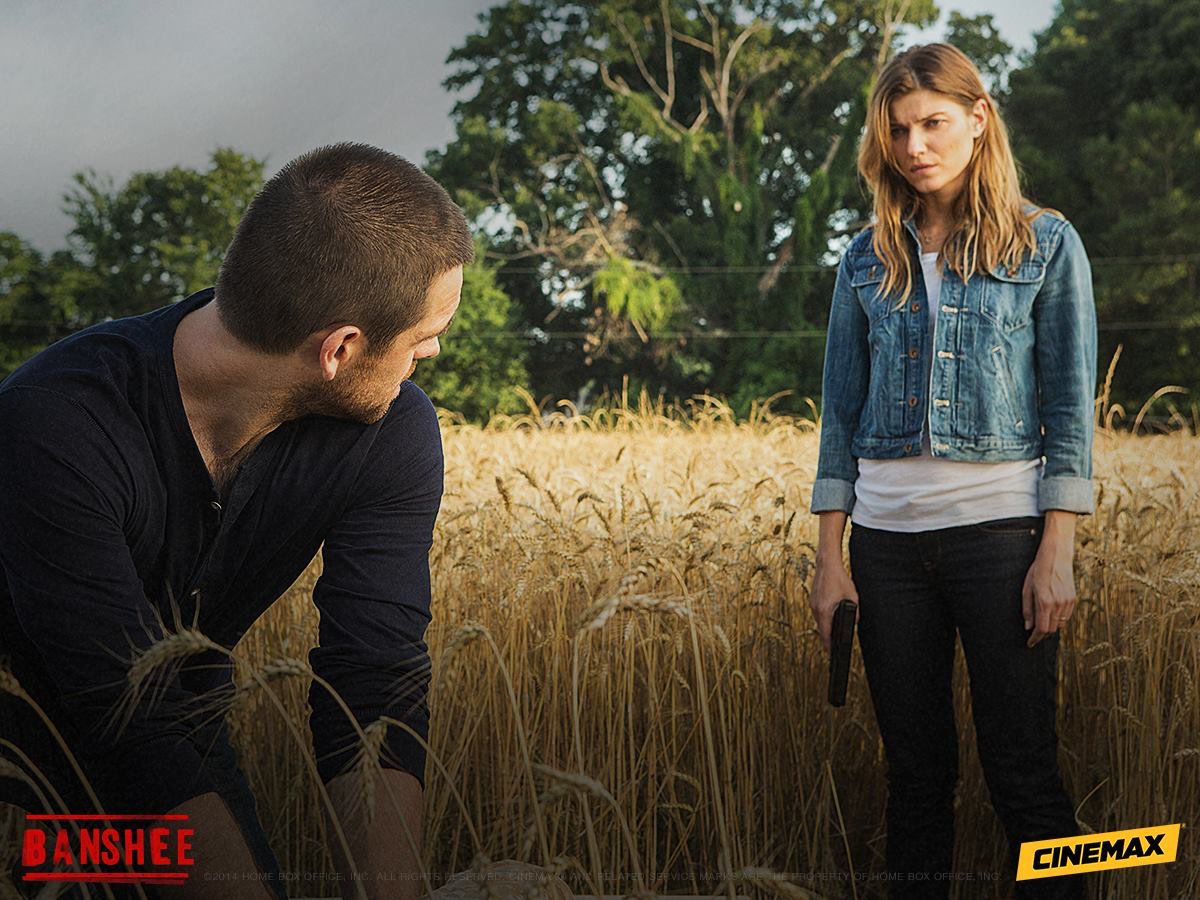 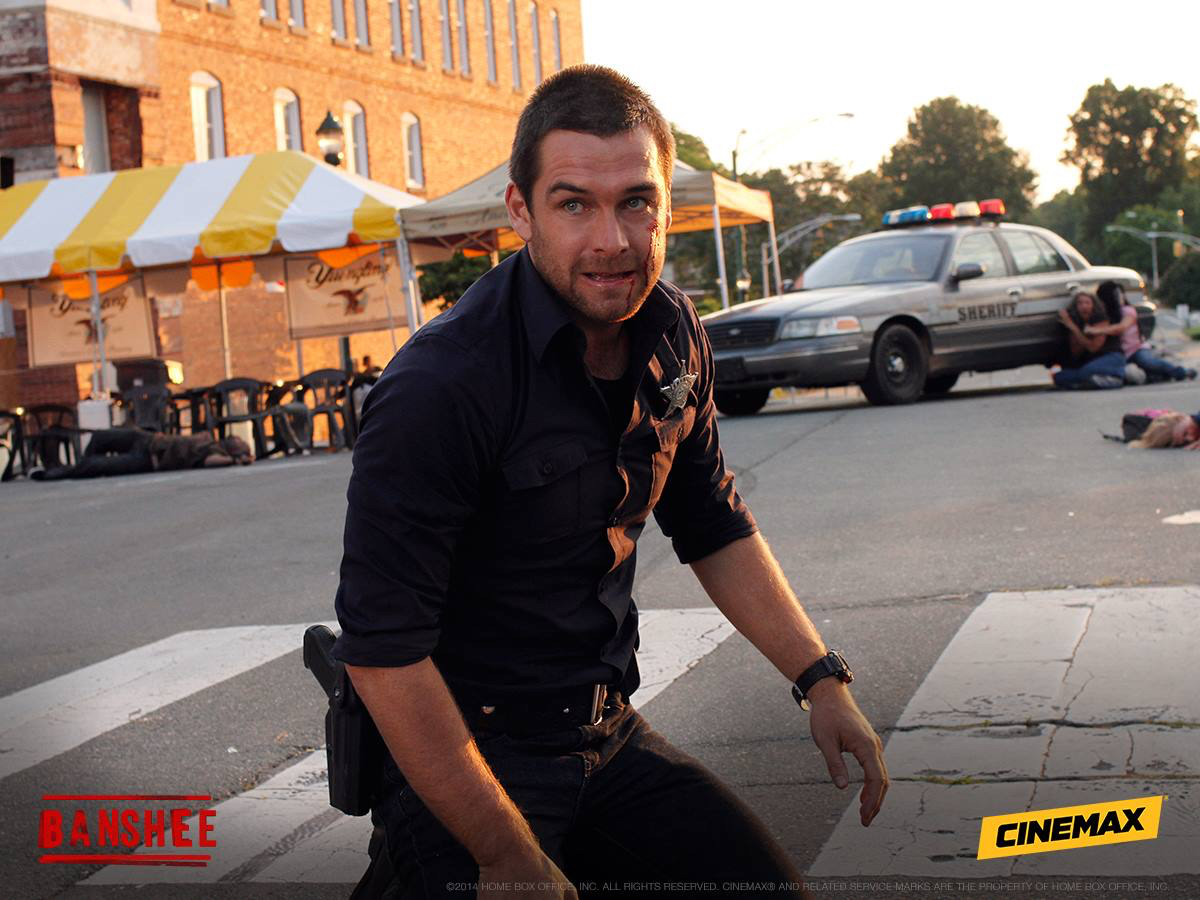 Banshee retains its highly varied cinematography, switching from warm and soft to crisp, stylized and gritty on a dime. Each 1.78:1/1080p/AVC-encoded transfer is highly detailed and largely without flaw. Close-ups and wide shots are both impressive, and the image reveals fine-object detail and miles-deep backgrounds in spades. Black levels are impressive, as is shadow detail - good, because the show often comes out at night. No edge halos or aliasing is present, and I noticed only very minimal noise in some darker scenes. Skin tones and color saturation are good, and smeary pans are non-existent.

Each episode receives a strong 5.1 DTS-HD Master Audio soundtrack to rival most feature film presentations. There is a lot of action in Banshee, and the soundtrack is highly immersive. Bullets sear through the surrounds, the subwoofer comes to life to blare strip club bangers, and ambient effects and directional dialogue make use of the entire sound field. Dialogue is always clear and without distortion; the score and strong soundtrack are given appropriate weight; and effects are impressively realized. French and German 5.1 DTS tracks and a 2.0 Spanish DTS track are included, as are English SDH, French, Spanish, German, Danish, Finnish, Norwegian and Swedish subtitles.

HBO and Warner Brothers release Banshee: The Complete Second Season on Blu-ray for Cinemax. This four-disc set includes all ten season two episodes and a few extras. The discs are packed into a dual-hinged Blu-ray case, which slides into a cardboard outer box. The set also includes an insert with codes to redeem both UltraViolet and iTunes digital copies of each episode.

Extras include Five Audio Commentaries and Two Twitter Commentaries with the cast and crew; Interactive Inside the Title Sequence features for each episode; and Banshee Origins (45:04/HD), a collection of twelve interesting prequel shorts for the show's various characters. You also get a Conversation Between Olek and the Albino (2:02/HD); Zoomed In (16:09/HD), which provides behind-the-scenes footage for the first eight episodes; some Deleted Scenes (7:11/HD); and Trailers (6:06/HD).

Season two of Banshee is an exciting continuation of the story and an improvement in both narrative and focus. Cinemax's crime drama is set in what may be the craziest small town in history. Sheriff Lucas Hood battles gangsters near and far while his former partners in crime struggle to go straight. Pulpy thrills, exciting action, camp, humor and great production values make Banshee: The Complete Second Season a winner. Highly Recommended. 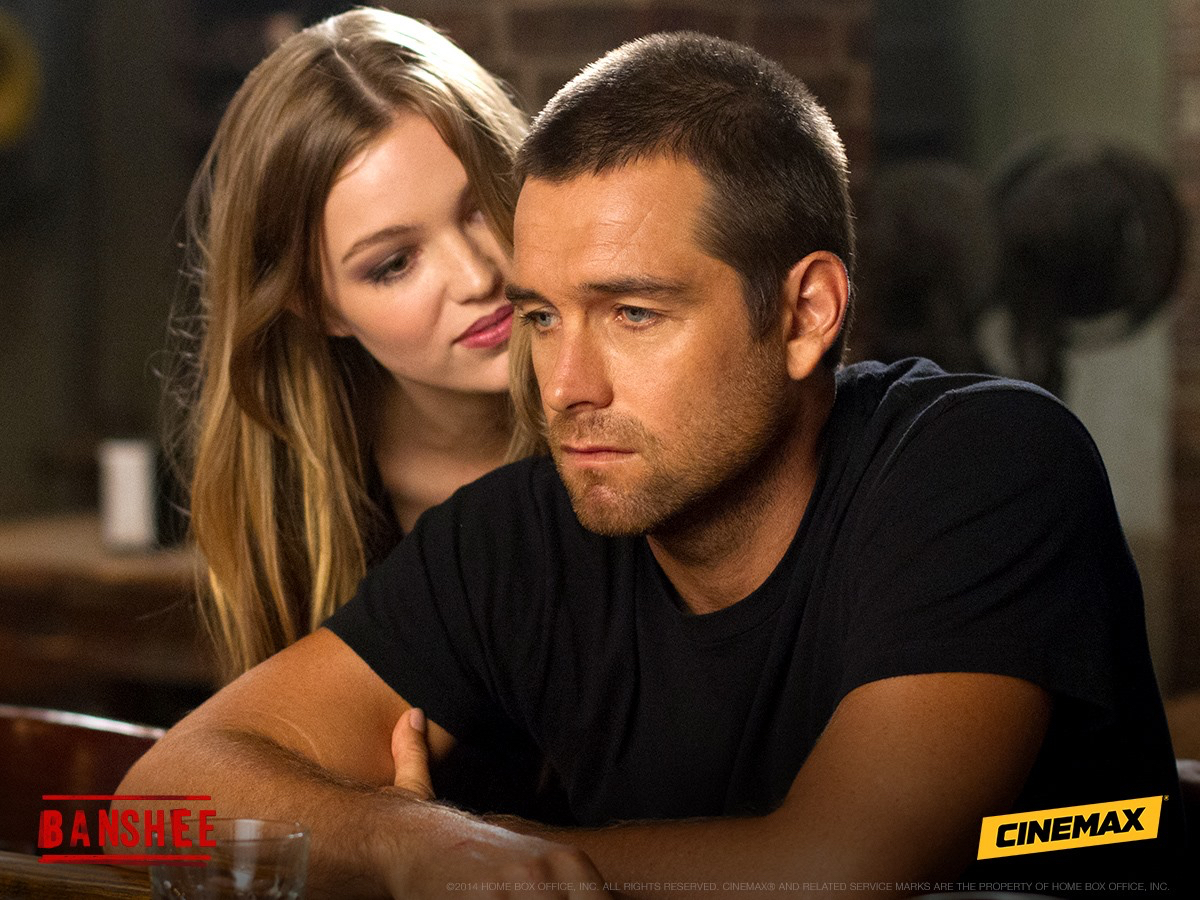