Warner Bros. // Unrated // November 4, 2014
List Price: $21.99 [Buy now and save at Amazon]
Review by Stuart Galbraith IV | posted November 19, 2014 | E-mail the Author
For most of the last 40 years or so, actor-producer-director-writer Jack Webb has been regarded as something of a joke. His most famous creation, humorless, deadpan Los Angeles Police Sgt. Joe Friday on Dragnet, was endlessly spoofed, even by Webb himself in a famous Tonight Show skit with Johnny Carson. Later, Webb's ‘60s revival of Dragnet began airing on Nick at Nite, the network emphasizing that show's ludicrous, campy depiction of stoned hippies. (That Dragnet was pretty good the rest of the time.) The otherwise excellent L.A. Confidential (1997) further damaged Webb's reputation, its story featuring a thinly disguised Dragnet, Webb's show portrayed as complicit propaganda serving to whitewash a corrupt LAPD.

But more recently Webb is being recognized as the truly great innovator he was back in the 1950s. Michael J. Hayde's terrific book about Webb, My Name's Friday, makes the convincing case that, in its original TV incarnation, Dragnet was decades ahead of its time in innumerable ways. Webb's obsession for authenticity obviously anticipated later shows like Law & Order and The Wire but, more importantly, the early Dragnets were at times wildly experimental in a new medium dominated by radio shows and B-Westerns unambitiously transitioning to television, and by the last gasps of old-time Vaudeville.

Two examples: "The Big Cast" featured Lee Marvin (one of many Webb reparatory actors also in Pete Kelly's Blues), playing a suspect in a man's disappearance. Virtually the entire episode consists of Webb, Marvin, and Barney Phillips (as Friday's then-partner, Sgt. Ed Jabobs) sitting around a table as Friday slowly gets Marvin's character to confess to killing the missing man. Partly due to Marvin's performance, his character believably casual and resigned to what he has done, that episode is uniquely riveting. Another outstanding show, "The Big .22 Rifle for Christmas," is a devastating episode about the search for a missing boy, whose body is eventually found in a shallow grave, hurriedly buried by his best friend after he accidently killed the boy with a Christmas gift, a .22 rifle. Uncompromisingly bleak and starkly political, it's still incredibly powerful, 62 years after it first aired.

Dragnet was hugely popular in its day, a Top Ten series for most of its run, peaking at #2 in 1953, and capturing a now unimaginable 53.2 share of the available viewing audience. Its success briefly all but gave Webb carte blanche in Hollywood, and he delved into feature films. The first of Webb's movies was, unsurprisingly, a big-screen movie version of Dragnet (1954), a film that, like its TV counterpart, is impressively innovative and unusual. It's a starkly violent film by 1950s standards, and director Webb employs many unusual camera moves and editing techniques. It's an underrated film.

Webb's second feature was the somewhat more conventional but still intriguing Pete Kelly's Blues (1955), a loose adaptation of Webb's 1951 summer replacement radio series. Both the radio show and the movie reflect Webb's passion for jazz, dating back to his friendship with an ex-jazzman who lived in his mother's boarding house, as well as Webb's lifelong interest playing the cornet. (Webb had recently divorced his first wife, jazz vocalist Julie London, but didn't hold that against her. Years later he hired both London and her second husband, jazz composer-musician Bobby Troup, for Webb's ‘70s series Emergency!) 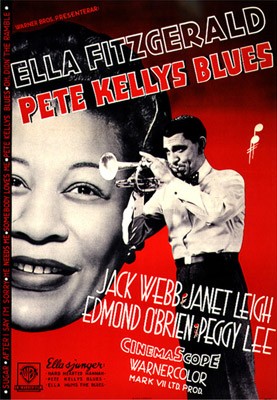 In the movie, Webb headlines Pete Kelly and his Big Seven, the house band at a Kansas City speakeasy during the height of Prohibition. Working for cheapskate speakeasy owner Rudy Shulak (Than Wyenn), Pete's band is barely getting by, and their meager income is further threatened by new local crime boss McCarg (Edmond O'Brien), who demands 25% of their take as their newly-imposed "manager." Tempestuous young drummer Joey Firestone (Martin Milner), outraged by the shakedown, intercepts a phone call intended for Pete, drunkenly telling McCarg to shove it. McCarg has Joey bumped off.

As a movie, Pete Kelly's Blues is fairly standard stuff, nearly a faux musical biopic patterned after films like The Glenn Miller Story (1954), though well done for its type, and a kind of "jazz noir." What makes the film stand out is its clearly knowledgeable and affectionate depiction of traditional jazz (though arranged and performed in the style of the 1950s), and as a showcase for Peggy Lee and Ella Fitzgerald, the latter playing a torch singer at another club.

Fitzgerald's only credit in a feature film prior to this was the Abbott & Costello comedy Ride ‘Em Cowboy (1942), a tiny part even smaller than here. In Pete Kelly's Blues, she gets to sing two songs: the jazz standard "Hard-Hearted Hannah" and the title song, written for the film by Ray Heindorf and Sammy Cahn. Both songs are a treat, and in between she has a nice short scene with Webb where she's entirely credible.

But Pete Kelly's Blues was really a showcase for Peggy Lee, whose only other starring feature had been opposite Danny Thomas in the 1952 remake of The Jazz Singer. Webb reportedly met Lee on the Disney lot where she was writing songs and performing several voices in Lady and the Tramp (1955). Lee was deservedly nominated for a Best Supporting Actress Academy Award; her performance as a doomed alcoholic is realistic and blends seamlessly with the more experienced actors.

Probably the film's biggest surprise, acting-wise, is raspy-voiced Andy Devine's revelatory work as a lawman determined to take down McCarg, even if it means putting Pete and his band in harm's way. There's no trace at all of Devine's usual comic persona; even his trademark voice is toned way down, and the familiar, much-liked actor comes off as genuinely menacing, even more than O'Brien's blustery gangster. Except for Henry Fonda's villain in Once Upon a Time in the West (1967), I can't think of another turnabout so extreme yet effective.

Today, most reviewers praise Webb's obvious affection for the music and the era while condemning his stiff, Joe Friday-like performance. There's some truth in that. Watch Billy Wilder's Sunset Boulevard (1950) with an audience and they invariably gasp at the sight of Jack Webb in that film because he's so unaffected, breezy, and naturalistic, a performance completely at odds with everything he did from Dragnet forward.

Pete Kelly's Blues was filmed in early CinemaScope, with an aspect ratio of 2.55:1. At the time Warner Bros. was experimenting with its own ‘scope lenses and color process (WarnerColor), though apparently only the latter was used on Pete, with original prints by Technicolor. The Blu-ray is a measurable improvement over the older, 16:9 enhanced DVD: the image still exhibits the same imperfections of early-scope, and the Warner Color tends to favor browns, but the 1080p image definitely squeezes what sharpness and color the original negative can offer. Conversely, the use of 4-track magnetic stereophonic sound was outstanding in 1955 and still impresses today, remixed here for 5.1 DTS-HD MA. Optional English subtitles are included.

Supplements are repeats from the earlier DVD, but here are in high-def. They include the fascinating Robert Youngson short Gadgets Galore, a one-reeler about early automobiles; and The Hole Idea (both also 1955), a clever, funny one-shot cartoon directed by Robert McKimson. Two trailers feature Webb in footage made just for the coming attraction preview.

Fitfully splendid with stuff in between that's still above average and very watchable, Pete Kelly's Blues is Highly Recommended.