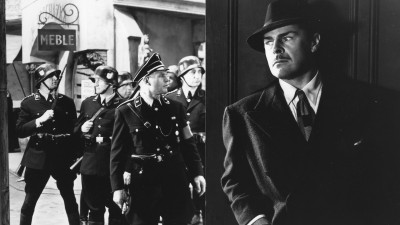 Though this Fritz Lang wartime thriller is sometimes billed as a film noir, it isn't really. Hangmen Also Die concerns itself with noble people, the Czechoslovakian underground who were trying to oust the Nazis from their homeland. Traditional film noir is about people with a questionable moral code who don't so much try to beat down the immoral society they are trapped in, but rather try to carve out a peaceful coexistence within it. Lang was one of the originators of the noir style, however, and so Hangmen Also Die nestles comfortably amongst the others thanks to the look the director gives his narrative. Many trademark Lang elements are here, such as his love of the grotesque (town clocks with images of death for decoration, a Nazi officer trying to pop a visibly huge pimple) and flamboyant villainy (the Gestapo interrogators turn mincing and preening into devices of intimidation). There are skillfully composed shots of city streets viewed from high vantage points, and angular lighting that casts piercing shadows that point straight to the dark side of human nature.

The story for Hangmen Also Die was conceived by Lang and agitprop playwright Bertolt Brecht (The Threepenny Opera), and the screenplay was finished off by John Wexley (The Long Night). It starts in the court of Reinhard Heydrich, a ruthless Nazi enforcer nicknamed the Hangman (played by Hans Heinrich von Twardowski, who made a career out of playing Nazi officers). Through cruelly bent pomp and circumstance, he forces the Czech officials to toady to his every whim. Thus, no one is sorry when a freedom fighter assassinates him. Dr. Franticek Svoboda (Brian Donlevy, The Great McGinty) quickly discovers that the only thing harder than killing the most sadistic guy in town is getting away with it. Martial law is imposed, and Svoboda is forced to rely on the help of Nasha (Anna Lee, Bedlam), a young woman who just happens to be standing on the wrong street corner at the wrong time. Her father (Walter Brennan, Rio Bravo) was an old-school revolutionary, and when 400 of the usual suspects are rounded up to try to force Svoboda to reveal himself, dear ol' dad is among them. Svoboda must then convince Nasha that it's better for the country not to give him up to the authorities, while also conceiving of a plan to get the persecuted Czech men off the hook.

Hangmen Also Die is a somber film that is indicative of the emotions of the day. The Czech resistance is a serious group of fighters who know their cause is larger than any one man's concerns. It's a common sentiment in movies of this kind, such as Pierre Melville's Army of Shadows. On the other hand, the Nazis are all about personal indulgence. During the interrogation of an elderly grocery woman, one Gestapo officer chews on a sausage demonstratively, and you have to wonder how many takes Lang had to shoot to get the one where its juices shoot through the air so magnificently. Inspector Gruber (Alexander Granach) heads the investigation, but he's not afraid to skim a little personal graft off the top or to go out for a night on the town when he's having a bad day. The gusto with which he goes about his work is reminiscent of Inspector Lohmann in M, though without the interest in the common good.

Even after all this time, Hangmen Also Die is a potent film, and it's up there with some of Fritz Lang's best.

Video:
The 1080p image on this high-def restoration of Hangmen Also Die is framed at the film's original 1.33:1 aspect ratio. The black-and-white image is noticeably better than the older Kino disc I had originally seen of this film, with sharper detail and just a clearer image overall. Some imperfections exist, largely because the film appears to have been restored from a couple of different sources and all weren't in the same shape. Still, the technicians have created a relatively consistent picture, bringing some cohesion even when certain sequences might not be as pristine as others.

Sound:
The English soundtrack is mixed as 2.0 LPCM track. The audio sounds fine. There are some pops here and there, but the dialogue remains clear and the music comes through nicely without any noticeable distortion.

Extras:
The Cohen Media Group has put together a couple of excellent bonus features to give background on Hangmen Also Die. First, film scholar Richard Peña has recorded a full-length audio commentary dissecting the movie's style and meaning. Second, a historical documentary titled "Story of a Hangman: Robert Gerwath on Reinhard Heydrich." It runs nearly half an hour and if features Gerwath, a historian who writes about the period, discussing the real man who inspired the movie. To go with this, there is a vintage German newsreel from 1942, though be forewarned that there are no subtitles translating the short featurette.

A short look at the restorationthe trailer for the recent re-release.

Finally, a booklet in the Blu-ray case features credits and liner notes.

FINAL THOUGHTS:
Highly Recommended. Fritz Lang's wartime thriller is a tightly scripted espionage thriller with a fascinating historical backdrop. Featruing a script by the director and noted playwright Bertolt Brecht, Hangmen Also Die is a wartime drama set in the Czech underground. Lang creates a sense of real threat, while also employing his trademark cinematic style. This restoration puts the film back in the state the director originally intended, and it proves that Hangmen Also Die deserves to be included in the ranks of the filmmaker's better known classics.