At the Earth's Core

Some of these movies were moderately successful, but arguably they had an even greater impact when they premiered on network television, particularly The ABC Friday Night Movie. These were the days before VCRs, cable television, and the Internet, when even dubious entertainment had a good shot at capturing 40% of the viewing audience. Most of the films above scored high ratings and were repeated at least once. They may seem extraordinarily quaint and silly now, but they sure fired the imaginations of children and teenagers of the 1970s.

At the Earth's Core was one of five similar British films produced or co-produced by John Dark and directed by Kevin Connor, the others being The Land… and The People That Time Forgot, Warlords of Atlantis, and Arabian Adventure. Four star or co-star Doug McClure, and three are based on novels by Edgar Rice Burroughs. The Land That Time Forgot is by far the best of the five, though all are innocently entertaining.

At the Earth's Core is notable in that it was, effectively, Peter Cushing's last starring role. He continued working after that, but in smaller supporting parts and cameos. A co-production among Dark, Amicus, and American International Pictures (AIP), At the Earth's Core isn't as good as the two Burroughs adaptations made immediately before and after because At the Earth's Core is built around a paper-thin plot populated by even thinner characters. More than the others it plays like a serial, dominated by fast-paced escape-recapture-escape-type thrills with goofier than usual monsters. 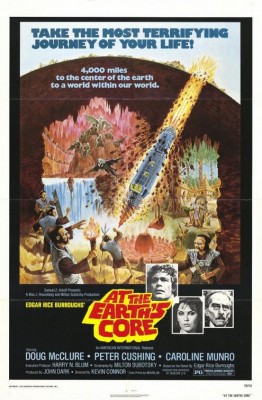 Adapted from Burroughs's 1914 serialized novel of the same name, the movie gets underway quickly, with mining heir David Innes (McClure), having financed doddering inventor Abner Perry's (Cushing) "Iron Mole," a colossal, drill-like excavating vehicle*, embarking on the craft's maiden voyage. Apparently the idea was merely to drill from one side of a mountain to the other, but the Iron Mole proves so effective if uncontrollable that it bores through the earth's crust as if it were butter, ending up near the earth's core and in the heretofore unknown interior world of Pellucidar. Amid prehistoric jungle-like conditions, including giant mushrooms similar to those seen in Journey to the Center of the Earth (1959), the pair are immediately menaced by a huge prehistoric bird. All of this occurs in the first 14 minutes.

Just as quickly, they're captured by Sagoths, humanoid but pig-faced creatures dressed like Mongols with samurai-like topknots. The Sagoths (whose gibberish language sounds like a CD scanning at fast-forward) are the servants of the Mahars, intelligent flying reptiles who use telepathy (and blinking eyes) to order the Sagoths about. Together they enslave warring tribes of stone-age humans. Innes and Perry are captured as well, with Innes immediately attracted to Dian (Caroline Munro), a beautiful princess. Aided by Ra (Cy Grant), Innes convinces the various human tribes to jointly revolt against the Mahars and their Sagoth minions.

Reportedly the budget for At the Earth's Core was just $1.5 million, peanuts even by 1976 standards. (Star Wars, made around the same time, had $11 million.) While the cost cutting is obvious, it's also truly remarkable that so much colorful production was squeezed out of such a tiny budget. Several sets are quite vast, the art and set decoration is imaginative, and there's a special effects set piece every few minutes. It has the look and charm of a classic Disneyland ride.

The cheapness does show: for the stone age humans, the hairstylist seems to have cleaned out a second-hand wig shop, while a "curtain of fire" and lava designed to prevent them from escaping dribbles what looks like butterscotch sauce.

Movies such as these are best remembered for their rubbery, man-in-a-suit dinosaurs, creatures that rarely seem alive. The ones here have remotely controlled blinking eyes and trapdoor mouths but are otherwise pretty stiff with fixed, snarling facial expressions. Nevertheless, they're generally lit better, shot from more interesting camera angles, and composited with the live actors more seamlessly than Japanese monster movies from this same period. And yet so long as they had compelling stories and characters, younger audiences were more than willing to suspend their disbelief.

Further, crude as these effects were, they have a kind of organic, hand-made quality that's been completely lost with the more realistic but almost always soulless computer animation commonplace today.

As a movie, At the Earth's Core is one of the weaker ones of this batch. It's action-packed but it lacks the sense of awe and mystery of The Land That Time Forgot, or the feeling that its protagonists are ever truly in any real peril. Indeed, where The Land That Time Forgot (and its sequel) are actually pretty grim if still juvenile adventures, At the Earth's Core is more a children's film, despite highly misleading ad copy promising "the most terrifying journey of your life!" It follows Burroughs's story reasonably closely, right down to the somewhat goofy names: "Hooja, the Sly One," "Jubal, the Ugly One," etc., though I was disappointed the filmmakers dropped "Ghak, the Hairy One."

How beefy Doug McClure became a kind of star of these pictures is a mystery. He had been in some Hollywood films and co-starred on the long-running TV Western The Virginian, though it may have been his association with the short-lived sci-fi series Search (1972-73) that attracted him to the film's producers. McClure was good in The Land That Time Forgot, delivering a sincere, mostly serious performance, but here he's all swagger, camping it up slightly, though still basically likeable.

Cushing hadn't made a film remotely like this since She (1965), but as the market for Gothic horror films in the Hammer mode, his career-defining genre, had petered out, he turned to other kinds of movies. He certainly seems to be enjoying himself playing a stereotypical clueless Victorian gentleman inventor. Cushing is, atypically, very hammy, but amusingly so.

Scorpion/MGM/AIP/Fox/Kino Lorber's (that's too many hands in this pie!) Blu-ray of At the Earth's Core looks good overall. The 1.85:1 HD presentation is pretty sharp with strong color, all of which looks great on HD projection screens especially. The region A disc offers DTS-HD Master Audio mono audio, which sounds fine, too.

Special features, credited to producer Walter Olsen on the back cover, include detailed and lengthy on-camera interviews with Caroline Munro and director Kevin Connor, the latter also providing an audio commentary. A trailer is included as well.

Yes, by 2015 standards At the Earth's Core is awfully clunky, but for those of us who were the right age back in 1976, we took great delight in its innocent adventure anyway. Can children and teenagers experience the same kind of enjoyment out of today's CGI-laden, high-concept special effects films? I wonder. Recommended.

* It very closely resembles the undersea, burrowing battleship from the Japanese movie Atragon (1963), which AIP released in the U.S.