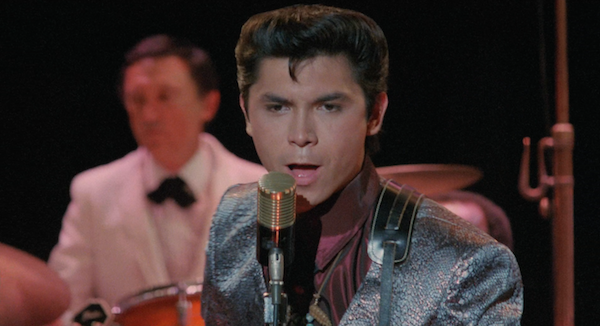 I started my recent review of The Buddy Holly Story (1978) by stating the obvious: musical biopics are the worst. That particular movie committed many of the silliest and most cliché offenses that biopics can perpetrate in bringing a real life to the silver screen. But, The Buddy Holly Story essentially succeeds as entertainment, thanks to its talented cast and energetically staged music sequences.

The 1987 biopic La Bamba, which retells the rise and demise of teenage Chicano rocker Ritchie Valens, is often mentioned together with The Buddy Holly Story. There could be a lot of reasons for this: the most obvious is that in real life the fates of both Valens and Holly were sealed by the same plane crash in 1959, but both films also helped to renew interest in '50s rock music for new generations, both films offered breakout starring roles for previously unknown actors (Lou Diamond Phillips as Valens, Gary Busey as Holly), and... oh yeah... both films were distributed by Columbia Pictures, who have offered La Bamba and The Buddy Holly Story as a double-feature on DVD for the past decade or so.

Those connections aside, La Bamba is quite different from, and notably superior to, The Buddy Holly Story. The film was written and directed by Luis Valdez, who, in 1981, made Zoot Suit, which was a hybrid theatrical/cinematic experience about another moment in California's Chicano history, the 1942 Sleepy Lagoon murder trial. Valdez eschews the artifice this time around and instead uses Ritchie Valens's brief life as an opportunity to craft a naturalistic family drama. That grounding of the story in Ritchie's family dynamic is what makes La Bamba so rewarding to watch. In fact, we don't get to hear Ritchie perform one of his songs for nearly twenty minutes into the film, but we don't miss it because the story is so strong.

When we first meet Richard Valenzuela, his family is stuck in the late '50s version of The Grapes of Wrath, living as migrant workers in an apricot orchard. Ritchie is a dreamer; he is driven by the dream of becoming a rock star who can give his family a better life but also haunted by nightmares of a plane crash incident from his youth. (Though Ritchie's family claims on their website that Ritchie was not obsessed with planes, director Valdez says in his audio commentary that Ritchie's record producer confided in him that Ritchie was convinced that he was going to die in a plane crash.) Before Ritchie realizes either of these dreams, though, his half-brother Bob (Esai Morales) comes to rescue the family and move them into a modest house in Pacoima, California. Newly released from the joint, Bob makes his money smuggling marijuana from Mexico in on his motorcycle when he's not doing more menial legit work, like collecting garbage. Though he helps bring home the bacon, Bob never feels like he is as loved by their mother Connie (Rosanna DeSoto) because he can never be as perfect as Ritchie. 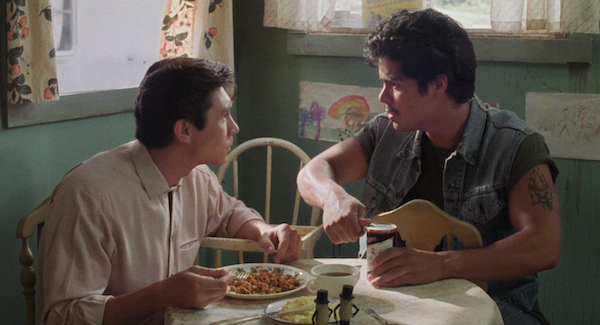 The sibling rivalry between straight-arrow Ritchie and wild man Bob provides the main tension in the story. When Bob first shows up at the mirgrant work camp, he steals Ritchie's girl Rosie (Elizabeth Peña) and brings her along to Pacoima (before too long, Rosie is Bob's disgruntled baby mama). After Ritchie is discovered by independent record producer Bob Keane (a low-key and ingratiating Joe Pantoliano) and starts selling records, his burgeoning success further alienates and angers brother Bob, whose own untapped talent for cartooning fails to afford him the rewards bestowed upon his little brother. In a film full of strong performances, Esai Morales does standout work as Bob, making him compelling and sympathetic whether he is being the life of the party or a self-involved, violent drunk.

As Ritchie, Lou Diamond Phillips has an even tougher role, especially as written. While La Bamba doesn't feel like hagiography, its vision of Ritchie Valens is basically that of an idealistic goody two-shoes. The fact that Phillips can deliver lines like "My dreams are pure rock and roll," without inspiring laughter is surely an achievement. Phillips is better able to give us a flavor of Ritchie's personality in the film's romantic subplot, where our hero goes after an upper-middle-class blonde girl named Donna (Danielle von Zerneck), only to have her father disapprove of Ritchie's ethnicity and the "jungle music" that he performs. When Ritchie responds by writing the song "Donna" and performing it for the song's subject in a pay phone booth, the scene is undeniably charming. Phillips tops it, however, with a teary rendition in the recording studio.

Of course, the singing voice we end up hearing does not belong to Lou Diamond Phillips, but instead belongs to David Hidalgo of Los Lobos. Los Lobos had their biggest chart successes with the renditions of Ritchie's songs they recorded for the film, and the La Bamba soundtrack album went multi-platinum. Their recordings are a fitting redux of Ritchie's work, even if they don't undertake a precise reproduction of the original performances. Elsewhere, Brian Setzer, Marshall Crenshaw, and Howard Huntsberry of Klique appear and perform songs as the classic rockers they most resemble: Eddie Cochran, Buddy Holly, and Jackie Wilson respectively (Crenshaw is surprisingly good in his brief dramatic scene; it's a shame he hasn't been tapped to do more acting).

As in all biopics, dramatic license must have been taken with some aspects of Ritchie Valens's life, but La Bamba almost never strains credulity. The film's layered storytelling, which balances the dramatic events occuring within Ritchie's family with the rocker's brief but memorable rise to stardom and his star-crossed courtship of a girl outside his social stratum, makes La Bamba absolutely believable and engrossing. Though Luis Valdez has continued with his theater work, it seems a shame that he has yet to direct another feature film because, more than twenty-five years later, this well-made film remains endearing and moving. Though it doesn't have a lot of competition, La Bamba is easily one of the best rock music biographies that has been committed to film. 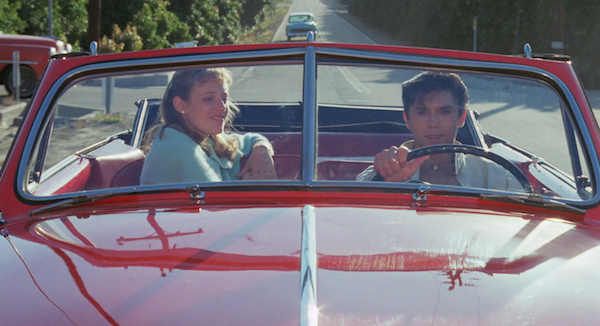 The Blu-ray
As with most Twilight Time releases, La Bamba comes in a limited edition of 3000 copies. The disc is packaged with a full-color booklet featuring stills from the film and an essay by TT's Julie Kirgo.

The Video:
Twilight Time tends to get very good HD masters from Sony/Columbia, and this AVC-encoded 1080p 1.85:1 presentation is basically perfect. The image is clean and stable, with pleasing film grain structure and no digital scrubbing or artifacting. Much of the film has a sun-baked look, but the colors are still rich and saturated without going over-the-top. The fine-detail reproduction is excellent. This is an exemplary transfer.

The Audio:
The DTS-HD MA 5.1 audio mix is bright and expressive. It's not too flashy, but it makes the musical performance sequences feel vivid and immersive. The dialogue and other atmosphere is clear and audible, and the entire track is defect-free. The disc offers two subtitle options: English SDH and Spanish subtitles.

Special Features:
Unfortunately, the music videos and EPK from the original DVD release have not made the leap to Blu-ray. Fortunately, the DVD commentaries have been ported over.

Final Thoughts:
La Bamba is a film I watched again and again when I was a kid. I owned the soundtrack on vinyl. Revisiting it now, decades later, I am surprised at how appealing the acting, writing, and directing is -- even more than the infectious music. Twilight Time's Blu-ray offers a technically top-notch presentation for this underrated gem. Highly Recommended. 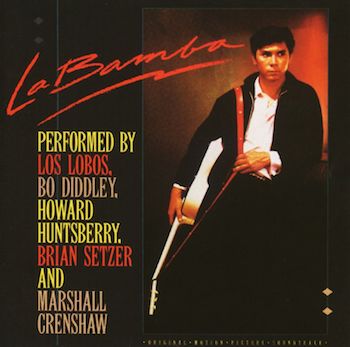