Within the first ten minutes of the James Brown biopic Get On Up, we see the man playing James Brown, wearing makeup and hair enhancements, wander into what appears to be an insurance workshop of sorts, carrying a shotgun and demanding to know who used the toilet in his private office. This eventually leads to a police chase and eventual arrest. We also flashback to the Vietnam war, and we see Craig Robinson (This Is The End) introduced to the movie as Maceo Parker, Brown's saxophonist who later emerged with George Clinton's Parliament Funkadelic group of the 1970s. It is hard not to be drawn in immediately to that, for sure.

Unfortunately for Get On Up, that may be the most interesting part of the movie. Co-written by Jez and John Butterworth (Fair Game) and directed by Tate Taylor (The Help), this film is produced by, among others, a longtime fan of Brown's in Rolling Stones singer Mick Jagger. It spans Brown's career from when he was a child in 1939, through some of his legal troubles and reconciliation with some of his bandmates in 1993. Over time, the film tells most of the events in Brown's life, from his upbringing in an estranged and occasionally violent home with his mother Susie (Viola Davis, Ender's Game) and his father Joe (Lennie James, Low Winter Sun). Arrested for stealing as a teen, he is eventually released under the supervision of a religious family, where he would then meet his longtime collaborator Bobby Byrd (Nelsan Ellis, True Blood). 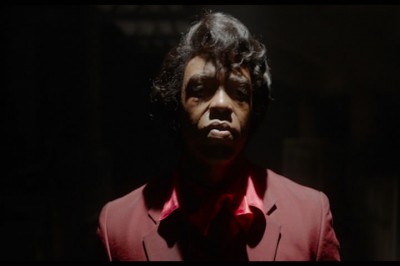 The Godfather of Soul is portrayed by Chadwick Boseman, who recently cut his teeth on another biopic, playing Jackie Robinson in 42 and before that as football player Floyd Little in The Express. To answer the topical questions at hand before anything else, he appears to be lip-syncing to Brown's vocals, but he manages to handle most of his moves on the stage well. Taylor features many songs over extended periods, and includes a lot of close-ups of James, managing to capture the energy and sexual essence of J.B. during many of the performances. You get the various looks of Brown from the 1950s to the 1980s with a good deal of faithfulness to them, and there is little doubt you will pore over Brown's musical library after the film. And yet, there seemed to be a certain loneliness or distrust surrounding Brown and those close to him. He seemed to have a trust with his manager Ben (Dan Aykroyd, Ghostbusters), but that seemed to be more of each knew where the other stood and what they stood for. With Brown and Byrd, or Parker, or some of the musicians in Brown's band like Vicki (Aunjanue Ellis, Ray), who had a relationship with Byrd that grew into marriage. The early days of Brown lend credence to this distrust, one that he never seemed to lose until near the end of his life. Boseman juggles all the balls in the air as could be expected. Even the latter years, when he donned makeup to play Brown in his 50s and 60s, he looks the tiniest bit silly with the prosthetics, but he has invested so much in the film that, combined with the lighting, you let it slide. On a side note, Boseman as 1971 James Brown is a dead ringer for Sly Stone. If Universal is listening, I would pay cash money to see this happen, so please make my dreams come true.

For as physically impressive as Boseman's performance is and it cannot be stated enough, it is stunning how well he nails Brown's physical talents onstage, even as the story generally checks off the requisite check boxes of your standard biopic. Stardom? Check. Conflict with your bandmates and/or family? Check. The crap times, where drugs are involved and a stay in jail may be included? For sure. The third act redemption or reconciliation? A thousand percent check. Oh, even the moment when Brown transcends his audience by playing a show shortly after the assassination of Martin Luther King, Jr., where it gives African Americans a chance to vent and perhaps even heals race relations just the tiniest little bit.

The flashbacks do take their toll on the viewer's time and eventually patience, especially after a movie spanning almost two and a half hours. It happens so often that it takes away from any momentum is tells with the contemporary characters, even to the point where it almost telegraphs some of James Brown's motivation when dealing with certain people. Compared to other films that gradually wean you off of the flashbacks, Get On Up does not seem to know when to quit. It also uses Boseman as Brown breaking down the fourth wall a bit too much for my liking. You do not need him to explain the intent, then use a flashback to get there. Pick your poison, but just one please. 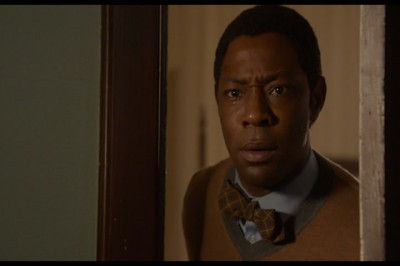 Ultimately, Get On Up may be remembered more for the performance of its star, more physically than dramatically, though that portion is a minor complaint. The film does many of the same things similar films have done, but those films do them better than this. In a weird way, this kind of serves as a summation of James Brown the person more than the musician. But still, regardless of anything else, I would put the first ten minutes up against anything else you or I have seen recently.


Universal trots out Get On Up to Blu-ray with an AVC encode, in a film that is presented in 1.85:1 widescreen. I was a little surprised by the choice not to go with Scope for this, but Taylor and cinematographer Stephen Goldblatt make full use of the frame, putting Brown in a larger than life position artistically. But in the older sequences, the Mississippi exteriors possess much detail in the cabin and trees, and the colors of the 60s and 70s look vivid, as well as the green in Brown's tracksuit at the beginning of the film Skin details are evident from the outset. It looks perfect in high-definition.


The DTS-HD MA 5.1 lossless surround track which graces Get On Up does right by Brown's music in every sense of the imagination. The rhythm section sounds robust without having to employ the end and the studio sessions are well-balanced also, and the vocals are clear as can be. Two particular moments I enjoyed where the final performance, one of restraint and emotion but you could feel the power of the vocals, and in the Paris performance the power of a live show really gets a chance to show off. Gunfire sounds crisp and the dialogue is consistent throughout, altogether a great experience.


Taylor does a commentary for the film all by his lonesome. While you would expect it to be a little dull at times, more so considering how long the film is. But he spots some of the actors that deserve mention for their work, and has enough worthwhile production recall about the film to make listening to the track decent. He does do a bit of narrating events onscreen from time to time, but the track is well-paced. All that said, it would have been better served by having another participant in the production with him to join and chat. 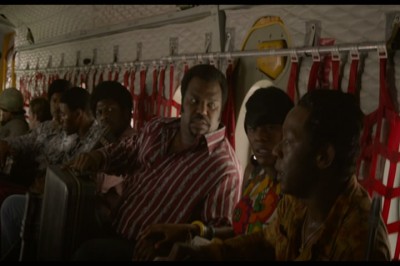 The balance of the other extras are good. Ten deleted/extended/alternate scenes (15:03) include a little more exposition on Brown meeting Jagger, and a scene with the young Brown and his father that probably should have been reintroduced, but overall, the scenes are mush. Four full song performances (9:24) for "Out of Sight," "Steal Away," "I'll Go Crazy" and "Cold Sweat" follow, and three more extended performances (7:27), two of "Please Please Please," including a live one, and the other of "Say It Loud." "Long Journey to the Screen" (3:58) covers the process it took to get Brown's life rights and a film happening, while "Meet James Brown" (11:25) examines what Boseman had to do to transform into the Godfather of Soul, and the cast and crew share their thoughts on him. "The Get On Up Family" (6:27) looks at the supporting cast, while "On Stage with the Hardest Working Man (6:25) looks at the musicians/actors next to Boseman. "The Founding Father of Funk" (13:19) is the big look at Brown from his peers, like Ice Cube, Cee-Lo Green and Pharrell Williams. They talk about his musical influence and his social one, and may be the best of the bunch. "Tate Taylor's Acting Class" (6:57) includes stars Alison Janney and John Benjamin Hickey (who appear in the film) dancing to one of Brown's songs, while Taylor holds off on yelling ‘Cut!' It is a pretty funny thing to watch, but moreover, Janney coming close to twerking is marvelous. There is also a standard definition copy of the film and a digital one for Ultraviolet and iTunes if you want it.


There are moments within Get On Up that go a long way towards cementing Chadwick Boseman's screen presence and his work as James Brown in this movie is the best I have seen from him yet. There are moments where you question some of the decisions in the storytelling, and it remains firmly a good retelling of Brown's life, rather than preferably a great one. Technically, the film delivers the goods from the sound and vision perspectives, and the amount of bonus material is better than expected. This is definitely one to check out for Boseman alone, but also to enjoy the music, as one should do with every James Brown record.