At War with the Army

Kino // Unrated // March 24, 2015
List Price: $24.95 [Buy now and save at Amazon]
Review by Stuart Galbraith IV | posted March 15, 2015 | E-mail the Author
I'd held back on watching At War with the Army (1950), Dean Martin & Jerry Lewis's starring debut, specifically because that was their one movie that had fallen into the public domain. Years back I made it through about five minutes of one those Dollar Video versions, but it looked terrible and I stopped watching.

When the new Blu-ray of At War with the Army was announced, I assumed it was an officially-licensed-from-Paramount release via Olive Films, but it turns out to be yet another public domain offering, this time from a company called Ignite Films, releasing though Kino Lorber. The good news is that, despite this, their release sources what appears to be a pretty good 35mm print. The beginning of each reel is scuffed-up, but it's only a modest notch or two below what Paramount might have offered Olive Films by way of an original camera negative. It's one of the very rare public domain offerings that, for once, doesn't look like one. 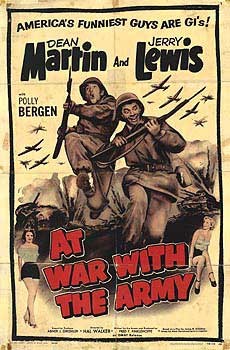 Martin and Lewis had already appeared in My Friend Irma (1949), playing supporting characters in that modest comedy, which starred Marie Wilson and Diana Lynn. Nearly a decade before Abbott & Costello did the same trick for a movie called One Night in the Tropics (1940), stealing attention away from its de facto stars. And just as Abbott & Costello followed that inauspicious debut with a cheap army comedy, Buck Privates (1941), Martin and Lewis followed suit. At War with the Army looks even cheaper than Buck Privates, though soon their comedies for Paramount would be far classier productions than Abbott & Costello's movies for Universal. Based on a stage play, three-fourths of it is confined to two adjacent rooms. Nevertheless, it was a huge hit, earning rentals (not grosses) of $3.35 million, making it one of the most successful films relative to its cost in Paramount's history.

This is even more staggering when one considers what a dreadful movie it is. Except for a couple of brief moments with the team and one hilarious sequence with Jerry, it's pretty terrible. The cause of all this rottenness is that, unlike Buck Privates, which ingeniously built its slim plot around some of Abbott & Costello's best burlesque routines, At War with the Army is an extremely stagy adaptation of a same-named Broadway play by James B. Allardice that ran an unremarkable 151 performances with, apparently, Gary Merrill and William Lanteau in the roles reworked for and played by Martin and Lewis. For 90% of the picture, Martin and Lewis don't function in the usual comedy team manner at all.

Pvt. 1st Class Alvin Korwin (Lewis) and Sgt. Victor Puccinelli (Martin) had been best pals and songwriting partners but, with the Second World War in full swing, Puccinelli regards Korwin as a pest and the two spend most of the story apart from one another. (Foreshadowing the over-abuse Martin dishes out to Lewis in these pictures, in their very first scene together Puccinelli repeatedly tells Korwin to "Shut up! Shut up! Shut up! Shut up!")

Puccinelli hates his desk job and wants a transfer overseas to join the fighting. Korwin wants a pass to visit his wife and newborn baby, as well as convince Puccinelli to record a song they've written on one of those "record your own voice" record-making machines once popular but now extinct.

The movie awkwardly shoehorns the pair into theatrical material that's more an ensemble piece, and a very mild satire of army base life. Various other characters have their own barely amusing comic subplots, while Dean and Jerry alternate between what their counterparts did in the original show and special material obviously written for the movie.

Jerry, on KP duty, sings an okay novelty song by Mack David and Jerry Livingston called "Beans," while Dean croons a fairly good number by the same songwriters, "Tonda Wanda Hoy," which Jerry spoofs later in the picture. But the movie is no Buck Privates; it's not even much better than Laurel & Hardy's terrible Buck Privates rip-off, Great Guns (1941). Really the only reason to watch At War with the Army at all are for two standout moments in this overlong (93-minute) film.

The first has Dean and Jerry performing at a nightclub, where Dean does a dead-on impersonation of Bing Crosby, while Jerry is an equally uncanny imitation of Irish character actor Barry Fitzgerald (together they spoof a scene from Going My Way).

The other, even bigger highlight has Korwin going AWOL, disguising himself as a woman. Usually in comedies like this the man in drag, while never believable as a woman to the movie audience, is accepted as one in the movie, often attracting unwanted attention from the story's manly nemesis. Here, however, the inspired sequence goes in an entirely different direction, possibly a first in film comedy. Jerry, with his then-gaunt features and hairy arms and chest, in drag resembles something like a Marquis chimp. Upon arriving at the nightclub, patrons are downright alarmed by the sight, which they find physically revulsive and recoil, almost in horror.

Filmed in black-and-white and in standard 1.37:1 format, At War with the Army is missing the original Paramount logo and shows signs of damage at the beginning of reels, but otherwise this is an excellent transfer for a public domain title. As it appears that a 35mm theatrical print was sourced, the 2.0 DTS-HD Master Audio mono (English only, no subtitles) likewise is less than perfect, with its share of pops and other imperfections, though it's not bad. No Extra Features.

Historically important as the first starring feature of Dean Martin and Jerry Lewis, At War with the Army perversely keeps them apart most of the time, in a tepid vehicle clearly trying to repeat the star-making success of Buck Privates, but which fails to understand what made that earlier picture so good. Still, fans of the team will want to have this, and despite its public domain label source, the transfer is surprisingly good. Marginally Recommended.