Man with Two Brains, The 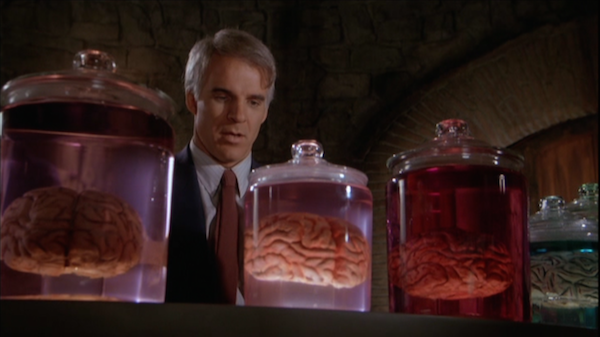 Fifteen years after it initially hit DVD, the 1983 Steve Martin comedy The Man with Two Brains has been reissued with an upgrade. What, you may ask, is included in the upgrade? Do we get retrospective interviews or commentaries or deleted scenes? Any bonuses at all? Well, how do I put this...? Bluntly, I guess. No, there are absolutely no new bonuses. Instead, this bare bones DVD-R release can only boast that, at this late date -- fifteen years into the twenty-first century! -- the film is finally presented in a proper 16:9 widescreen aspect ratio instead of the long-available "fullscreen" picture cropped for SD TVs (the 1990 Steve Martin comedy My Blue Heaven also received a belated widescreen upgrade, although Warner Archive didn't send DVD Talk a screener).

Whether or not the proper aspect ratio has anything to do with it, The Man with Two Brains played much better for me during this most recent viewing than it had in the past. Call me a heretic, because I do consider myself a Steve Martin fan... and yet, I've only ever enjoyed his movie breakthrough The Jerk in fits and starts: some scenes have me on the floor laughing, while long stretches leave me stone-faced. My memories of The Man with Two Brains were similarly hot-and-cold, but during this viewing, I laughed heartily and consistently. Director and co-writer Carl Reiner's mad scientist comedy never quite reaches the heights of ingenious lunacy scaled by his buddy Mel Brooks's Young Frankenstein, but this flick offers an unbeatable blend of daffy surrealism, affectionate genre parody, and heartfelt romance (it's a romance between a man and a disembodied brain, but it's still effectively sweet).

Martin pleasantly riffs on his self-important stand-up persona as brilliant brain surgeon Michael Hfuhruhurr (pronounced the way that it's spelled; the name is probably Martin's all-time funniest alias next to "Gern Blanston"). Michael is the top man in his field and the inventor of the "cranial screw-top" surgical method, but he still feels something essential is missing since the love of his life died. When he runs into the beautiful but deceitful Dolores Benedict -- literally, with his car -- Michael takes one look at the semi-conscious sexpot and feels ready to love again. Unfortunately for Michael, Dolores is a manipulative nymphomaniac played by Kathleen Turner, perfectly riffing on her star-making turn in Body Heat. Clearly, no good can come from this.

The first half of the film offers plenty of the non sequitur-heavy, reality-bending gags that typify Steve Martin's early comic work. Before marrying Dolores, Michael asks his dead wife to give him a sign if he shouldn't marry the gold digger. Immediately, a ghostly voice bellows, "NO!" The floor shakes, the wall splits, and his wife's portrait on the wall begins to spin. With perfect deadpan timing, Martin waits for everything in the room to calm down before adding, "Just any kind of sign. I'll keep on the lookout for it." The movie also gets a lot of mileage out of Michael's growing frustration as the seemingly randy Dolores nonetheless finds countless different ways to rebuff her new husband's attempts to consummate their marriage, including what might be the most tasteful erection jokes in the history of R-rated comedy.

Eventually, Michael takes Dolores to Vienna, in hopes of turning a business trip into a honeymoon. It's no surprise that blue-balled Michael fails to find the satisfaction he was seeking, but he does meet an intriguing fellow brain man, Dr. Alfred Necessiter (the always wonderful David Warner). Dr. Necessiter has created a liquid that will extend a brain's life in a jar after the body has died, which Necessiter uses in tandem with a classic mad-scientist-type brain transference machine to distill these dead human intellects into gorillas. He has yet to perfect the method or to try it out on a human body, but with a madman murdering people in elevators all over Vienna, Dr. Necessiter keeps stocked with plenty of brains so he can continue giving his vision of surgery-free brain transplants the old college try.

And then, right around the halfway mark, the film takes a simultaneously odd and sweet turn. Michael realizes that he has a telepathic connection with one of Dr. Necessiter's jarred brains, and he ends up falling in love with this disembodied woman, Anne Uumellmahaye (pronounced the way it's spelled; voiced by an uncredited Sissy Spacek). While this love story plot is as ridiculous as anything that the film has offered so far, Martin, Reiner, and co-writer George Gipe construct the scenes between Michael and Anne's brain like a fairly traditional love story. In fact, I felt like I saw Steve Martin the Romantic Comedian, of Roxanne and L.A. Story, starting to make his first appearances in these scenes. And more than three decades before Scarlett Johansson's lauded performance in Her, Spacek proves that you don't need to be visible onscreen to make a movie audience fall in love with you.

The film eventually kicks back into madcap overdrive, with Dolores plotting to separate Michael from a recently acquired inheritance and Michael plotting to separate a random unsuspecting woman from her life so that Dr. Necessiter can put Anne's brain into her body. The resolution isn't a big surprise, but the writers manage to throw in plenty of offbeat laughs and twists to keep the final act from being a slog.

The Man with Two Brains has a relentlessly gag-heavy script brought to life by a comic genius in his prime and a perfectly cast supporting ensemble. If you haven't seen it yet, go ahead and treat yourself. 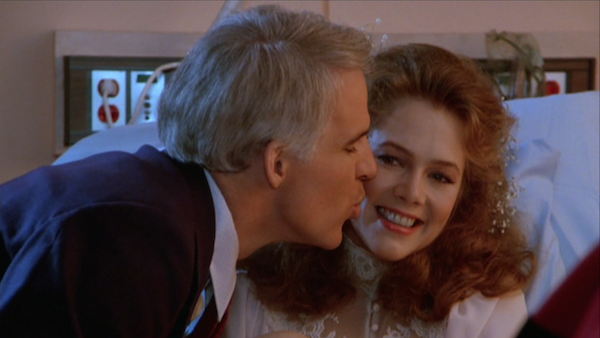 The DVD
The new edition of The Man with Two Brains comes to us from the Warner Archive Collection on a manufactured-on-demand DVD-R.

The Video:
As I stated above, this release marks the widescreen DVD debut of this film. The packaging says the aspect ratio is 1.85:1, but it looks more like a 1.78:1 widescreen image to me. However, even if we are still missing a little information here or there, the compositions do not appear to suffer. Otherwise, the picture is solid if not particularly eye-popping. Detail can be a little soft and the color palette can come off as a little drab in many scenes, although the latter seems more the result of Michael Chapman's cinematography than this particular transfer. There's some noticeable speckling on the film in the first couple of reels, and the blacks crush in a few early dark shots, but mostly this transfer is above average.

The Audio:
As on the earlier release, the film comes with a trouble-free Dolby 2.0 mono audio track. Though it is not accessible from the main menu, an English SDH track is accessible if you hit the subtitle button on your remote.

Final Thoughts:
A hilarious film from start to finish. I recommend it highly. It's hard not to feel short-changed by this re-release though, which finally offers the film with a widescreen image and nothing else. If Warner had even just sprung to put the film on Blu-ray, I might be more enthusiastic. Instead, I give this disc a subdued Recommendation. 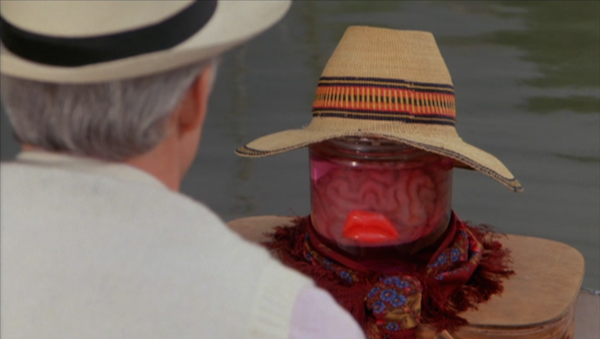