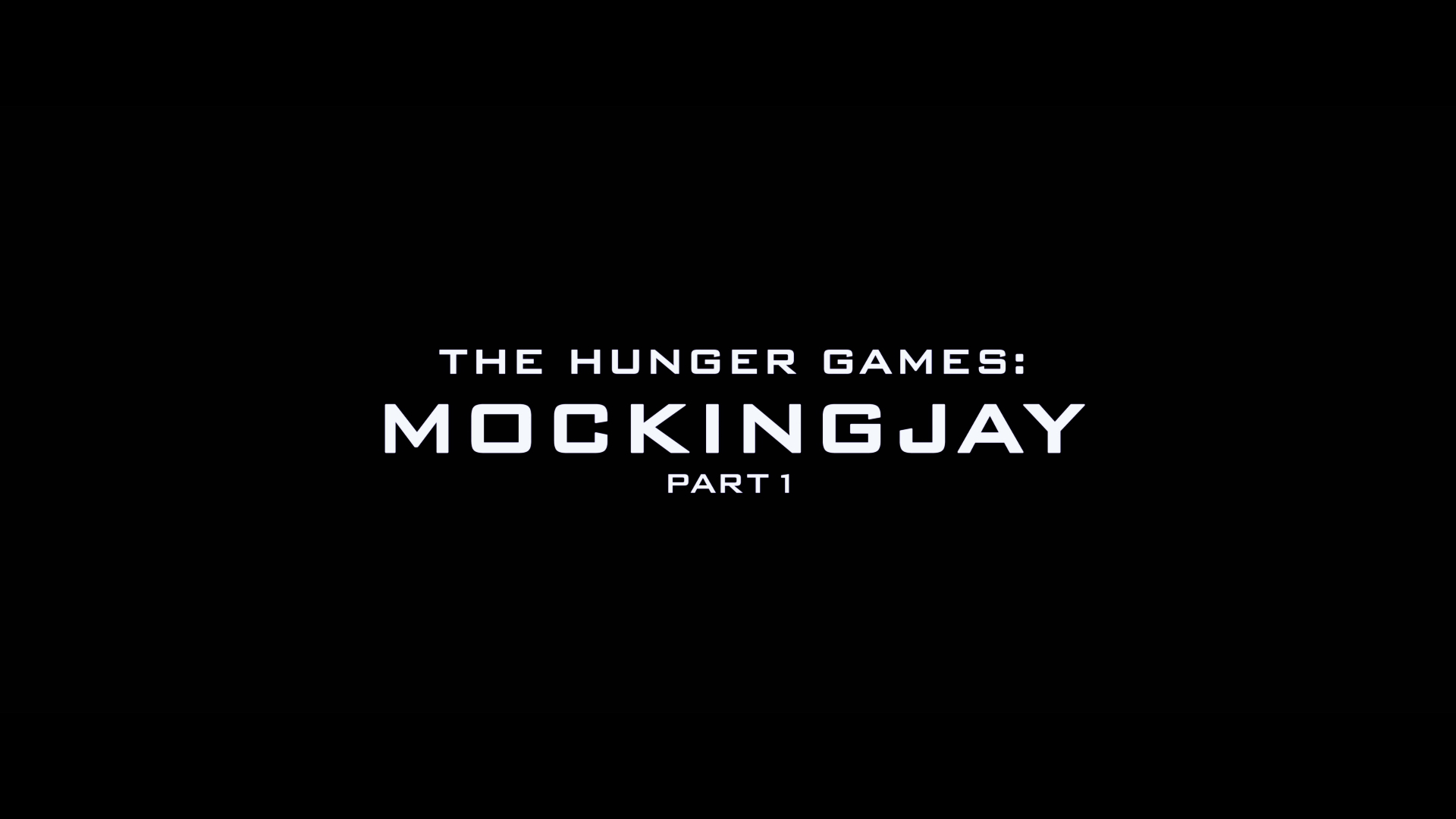 This adaptation of Suzanne Collins' final book in "The Hunger Games" trilogy - the first half of it, anyway - leaves the arena for District 13's military stronghold, where Katniss Everdeen (Jennifer Lawrence) holes up with fellow District 12 refugees to mount a counterattack against the Capital's military forces. These films have been atypically successful with both critics and Young Adult fans, particularly under the direction of Francis Lawrence, and The Hunger Games: Mockingjay - Part I is no exception. This is a dark story about suppression and classism in a dystopian future. Lawrence remains compelling, and the actors filling ranks are uncommonly good, especially Julianne Moore, Woody Harrelson and the late Philip Seymour Hoffman. The decision to split Mockingjay into two parts was undoubtedly influenced by the success of the bifurcated Harry Potter and the Deathly Hallows, but this first part never feels like a placeholder. Instead, it deftly transitions from the Hunger Games to a social rebellion set to boil over in the final chapter.

Katniss' two-time partner Tribute, Peeta Mellark (Josh Hutcherson), is imprisoned in the Capital, where he makes disingenuous pleas through Capital mouthpiece Caesar Flickerman (Stanley Tucci) to Katniss and the rebels to abandon their charge lest they face annihilation. District 13 President Alma Coin (Moore) and rebellion leader Plutarch Heavensbee (Hoffman) watch from a command bunker before tasking Katniss with embracing her role as the Mockingjay. She becomes the reluctant face of anti-Capital propaganda in flashy, flag-waving and borderline satirical video transmissions that highlight Capital-backed atrocities like a bombed-out hospital. Panem President Coriolanus Snow (Donald Sutherland) finds perverse amusement in Katniss' drive, and promises to hurt those closest to her if she does not desist. 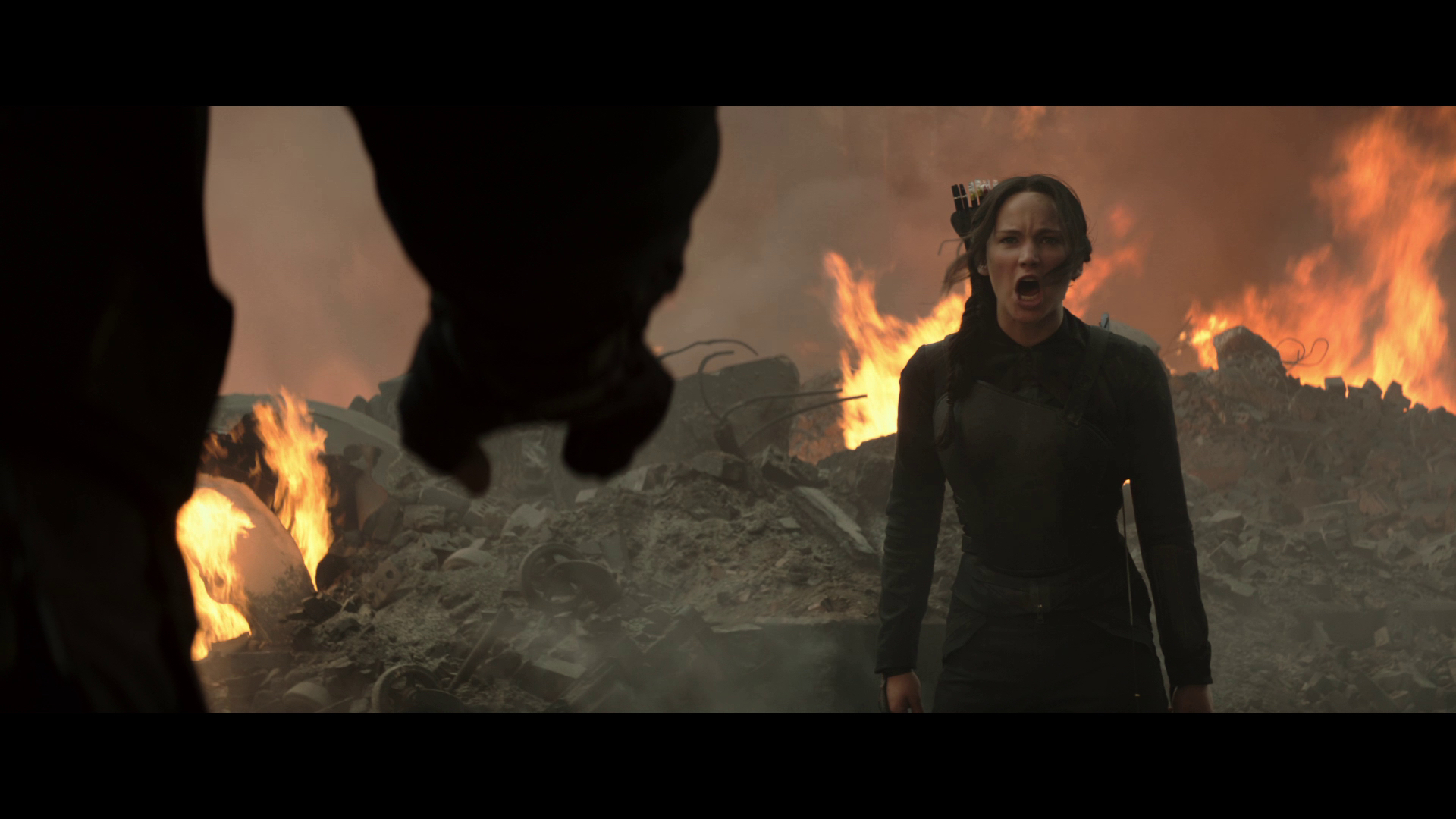 Mockingjay is a different beast from the previous two films - a direct reflection of the novel - and gone is the gladiatorial combat and bloodletting of the games. This film focuses on the politics of Panem, though the inner workings of the Capital remain at arm's length. President Coin and her subordinates work in a calculated calm and call upon Hay Mitch (Harrelson) and a miserably dressed-down Effie Trinket (Elizabeth Banks) to encourage Katniss. Capital ex pat Cressida (Natalie Dormer) leads a video crew to follow Katniss and capture inspiring footage. Mockingjay does a nice job weaving each of these characters into the narrative. Gary Ross, director of the first film, struck gold with Harrelson and Banks in these roles. They add both levity and gravity and steal every scene they're in.

Director Lawrence retains the natural, almost-folksy vibe started by Ross but prefers smooth tracking and intricate framing to dizzy Steadicam realism. The landscape changes from North Carolina to Georgia, but the rural, woodsy calm of the outlying districts remains until Capital bombers uproot the environment. Katniss even uses a folk song written by author Collins to rouse the movement. All of this quiet strategizing is refreshingly free of YA angst and yearning, and Katniss still has no romantic love for longtime friend Gale (Liam Hemsworth). Lawrence is perfect for this role because she is believable as a fighter and a victim. Peeta's struggle hits Katniss hard, and she begins to crack under the tremendous pressure of her unsolicited position as populist leader. 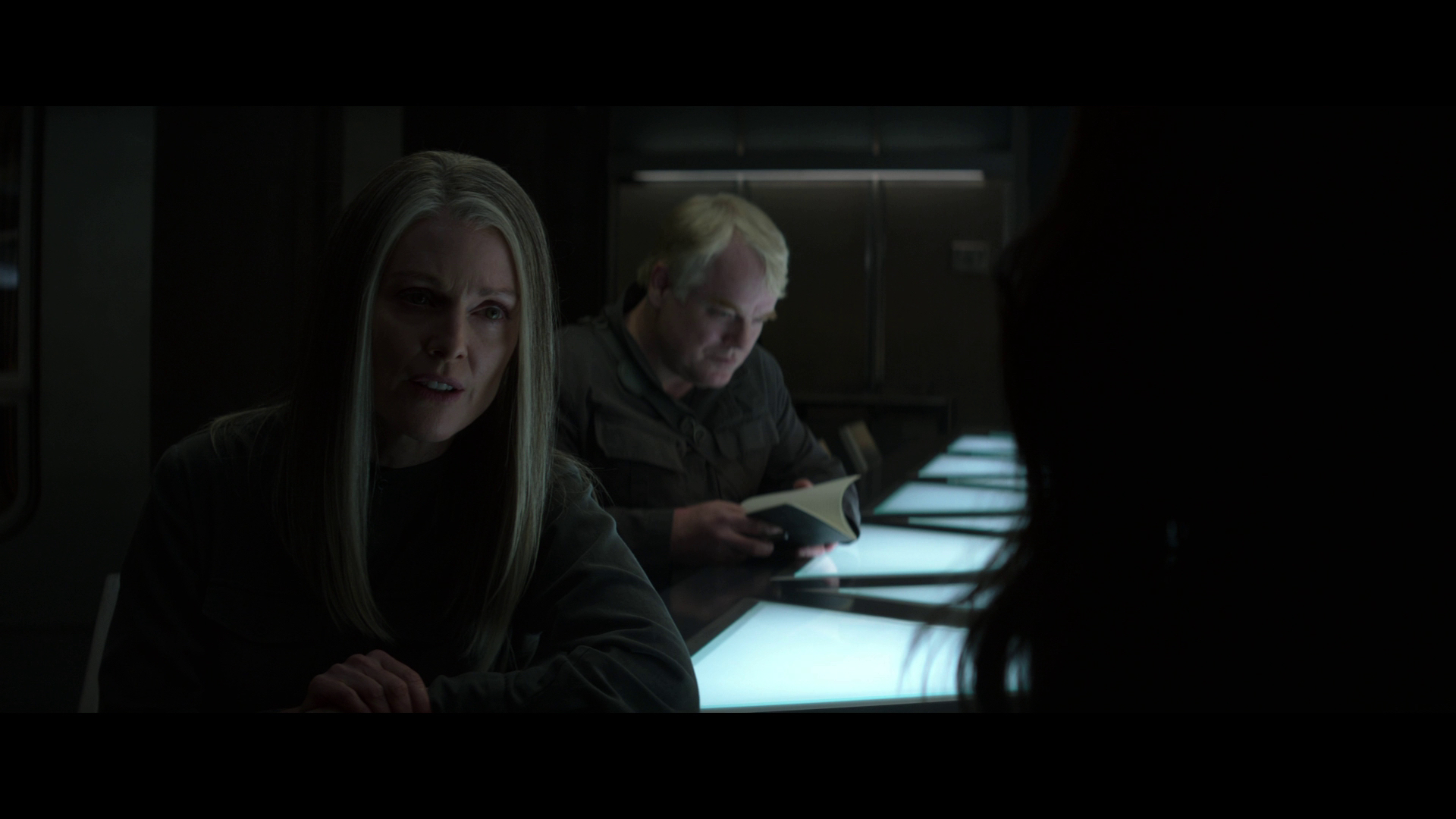 Part 1 ends in a cliffhanger of sorts involving the very tormented Peeta. A scarily thin Hutcherson does good work here, and Peeta's reaction to Katniss is animalistic. There is a scene during the climax that teases a really unresolved ending, but Lawrence and company wisely carry the story forward to a natural breaking point. The final film promises death and redemption, and Mockingjay - Part 1 left me hungry for the next installment. Collins' novels laid strong foundations for these adaptations, and the filmmakers and cast make the most of this material. You find a relevant cautionary tale in The Hunger Games that transcends its YA roots into something worthy of a wide audience. 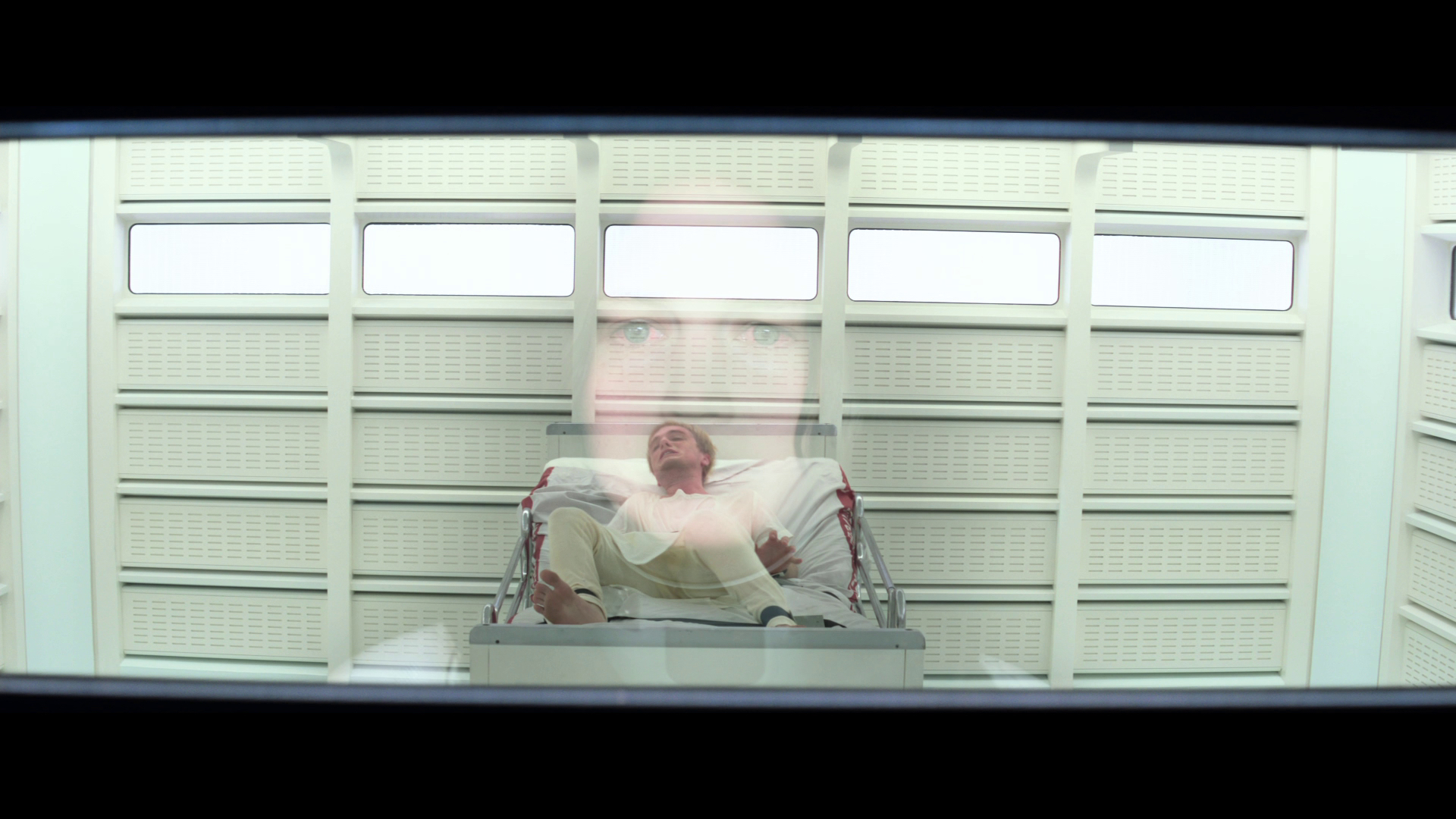 This is a strong 2.40:1/1080p/AVC-encoded transfer from Lionsgate. The frame is packed with fine-object detail and excellent texture on fabrics, landscaping and buildings. The filmmakers tweak the colors and saturation of scenes depending on their location, but the transfer maintains a realistic, film-like appearance throughout. Black levels are slightly disappointing, and at times push toward a grey/green appearance; something also reflected in a couple of smeary pans. Sharpness is otherwise good, and no issues with aliasing or digital sharpening come forward.

The massive Dolby Atmos soundtrack, which can unspool as a 7.1 Dolby TrueHD mix, is immersive and intricate. When Capital bombers fire on District 13, the bombs fall and bunker shakes in realistic despair. Water drips and stones crumble from the far corners of the room, and the LFE shakes in anticipation as a rebel group counters Capital guards. Directional dialogue and ambient effects are frequent and nuanced, and James Newton Howard's score is cinematic and appropriately balanced. Lionsgate also includes a 2.0 Dolby Digital mix optimized for late-night listening; a "Headphone:X" audio track that simulates a surround environment in headphones; and an English DVS track. You also get English, English SDH and Spanish subtitles.

This two-disc set includes the Blu-ray, a DVD copy and both iTunes and UltraViolet digital copies. The discs are packed in a standard case, which is wrapped in slipcover with artwork matching the theme of the previous Blu-ray releases. Lionsgate again provides a plethora of extra features: 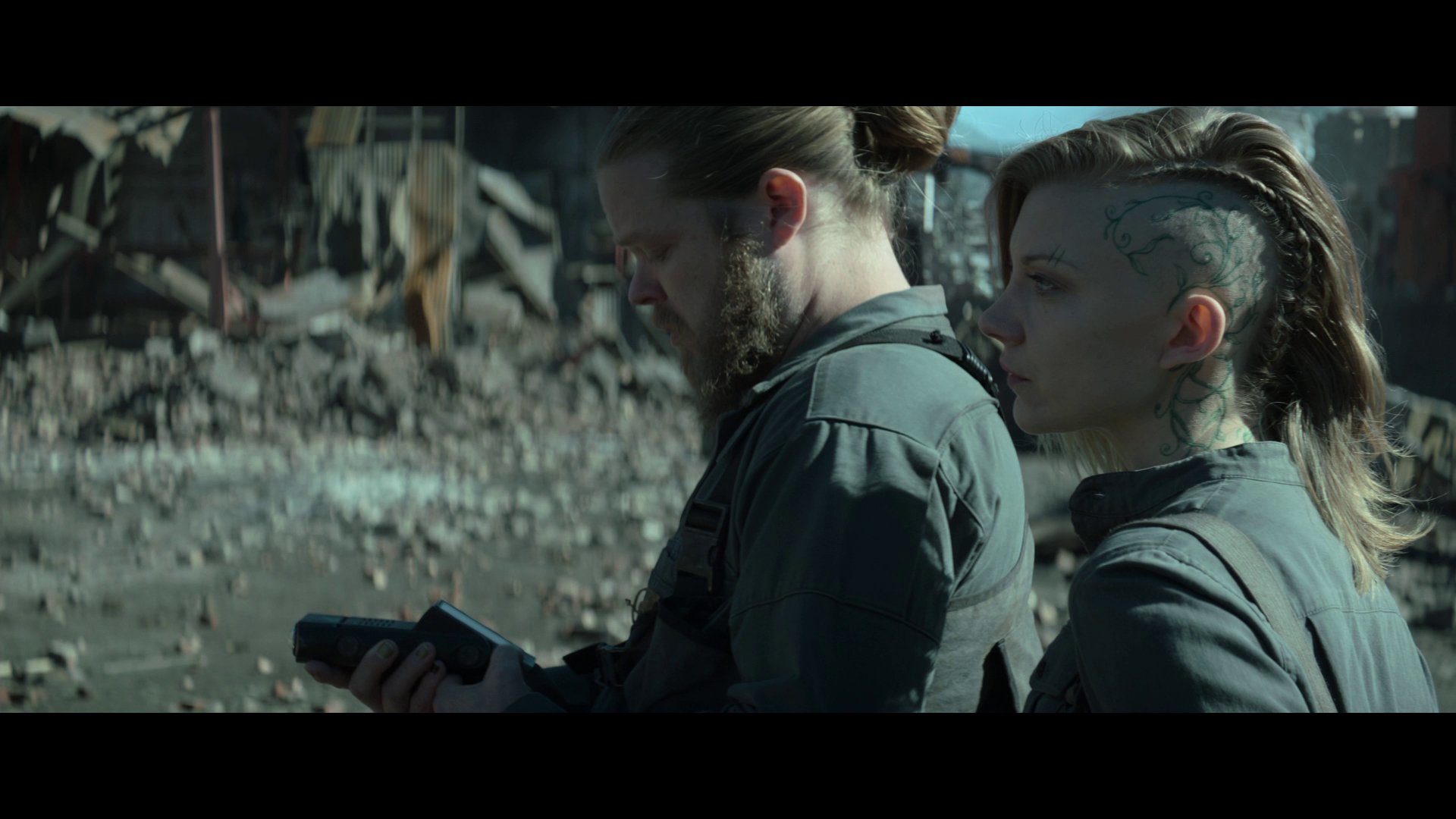 Perhaps the adaptation of the final novel in "The Hunger Games" trilogy could have been one, three-hour film, but director Francis Lawrence and company create a compelling first part that feels like its own, worthy entity. Mockingjay - Part 1 escapes the combat arena into a new world of politics and social rebellion, and Jennifer Lawrence again excels as girl-on-fire Katniss Everdeen. Lionsgate's Blu-ray is technically strong and includes a great documentary. Highly Recommended. 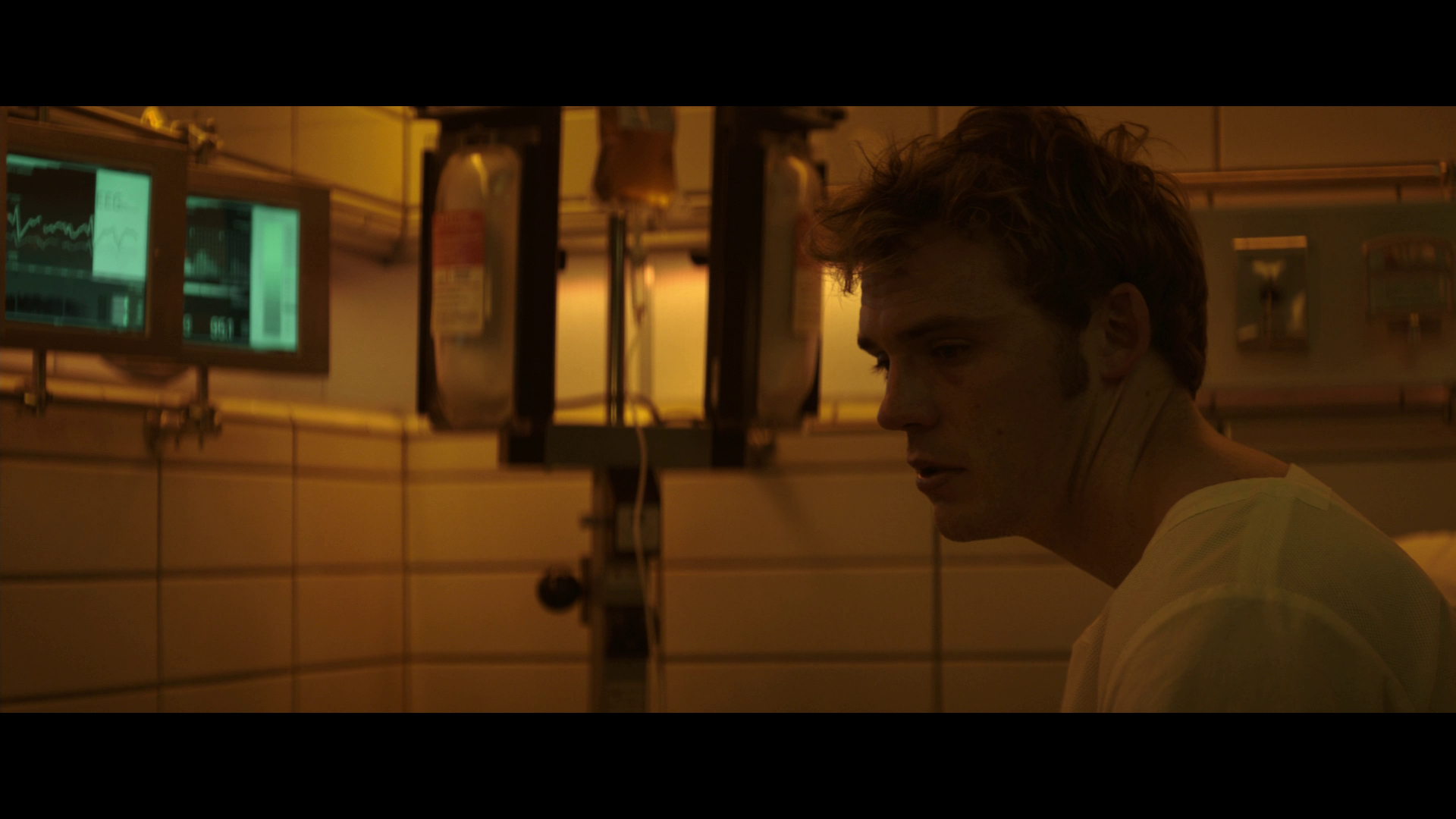 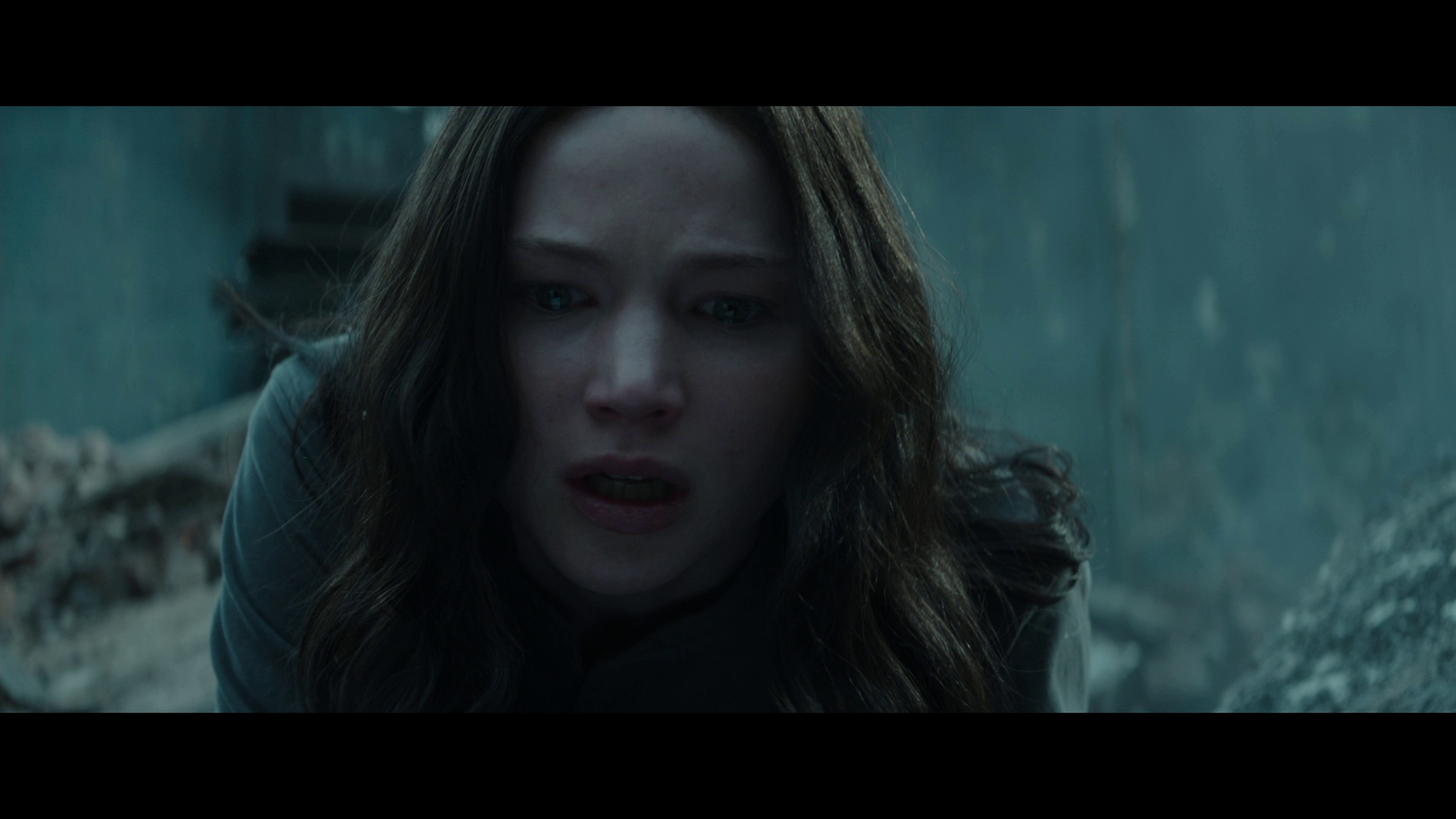 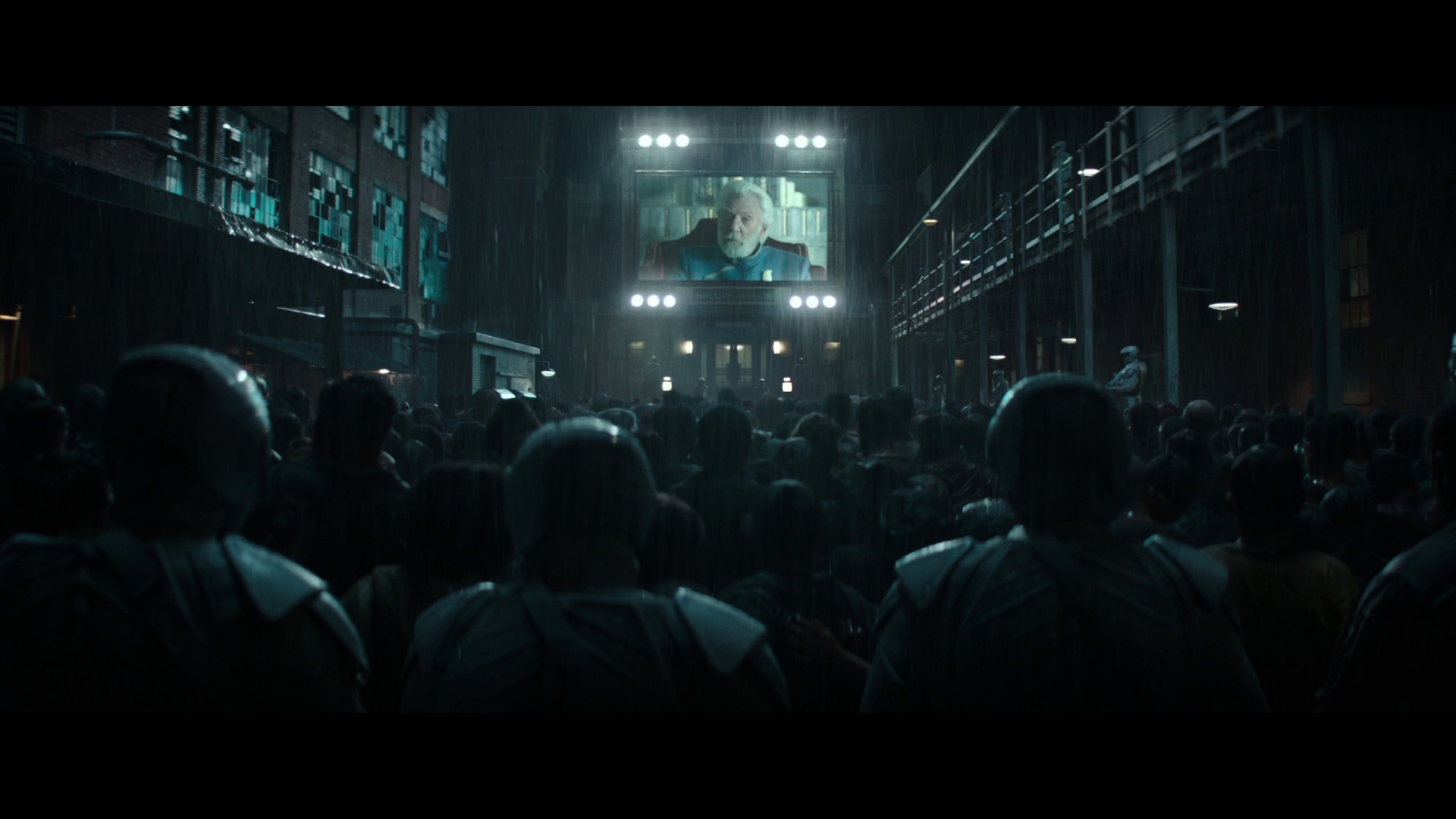 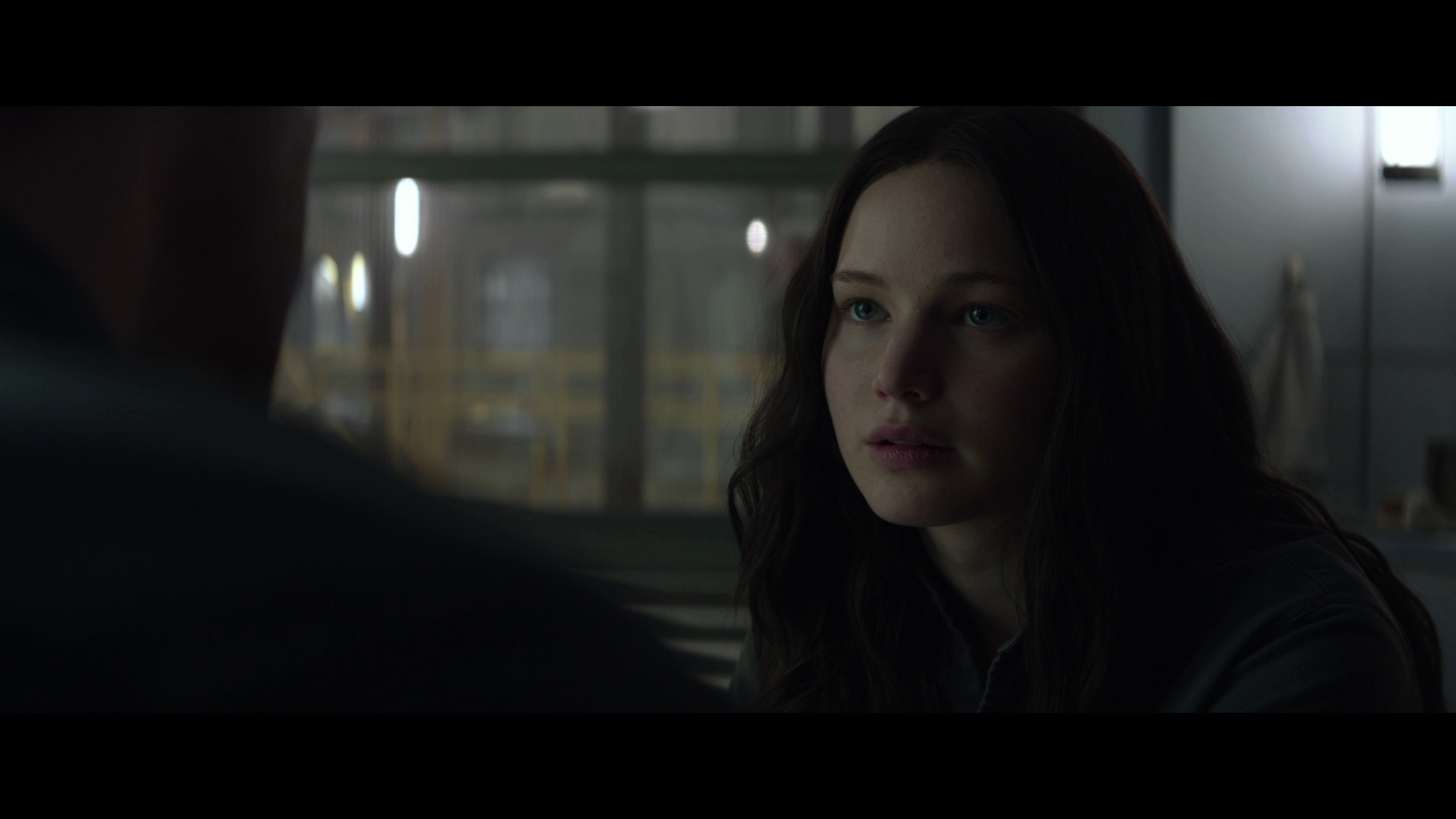 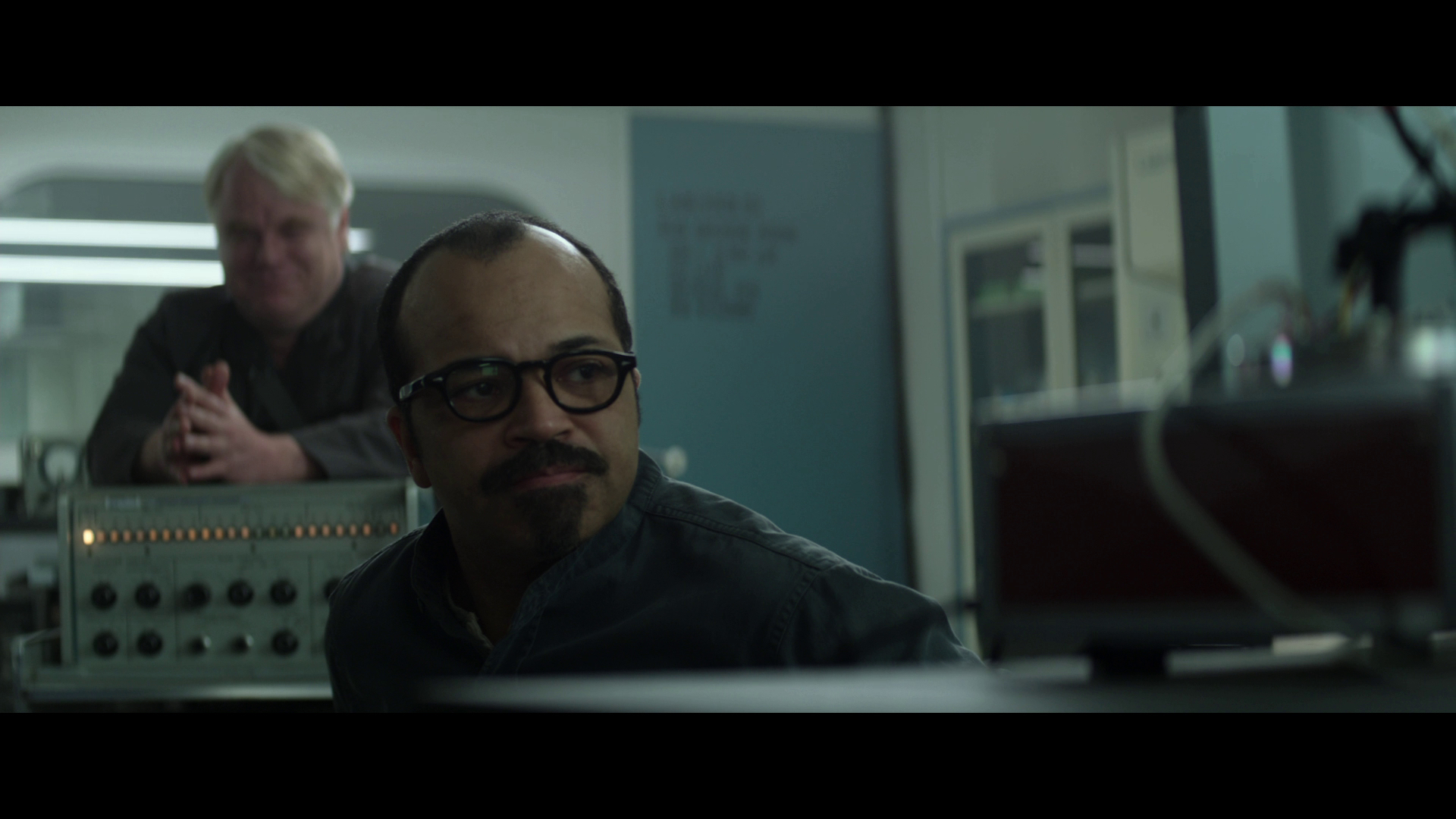 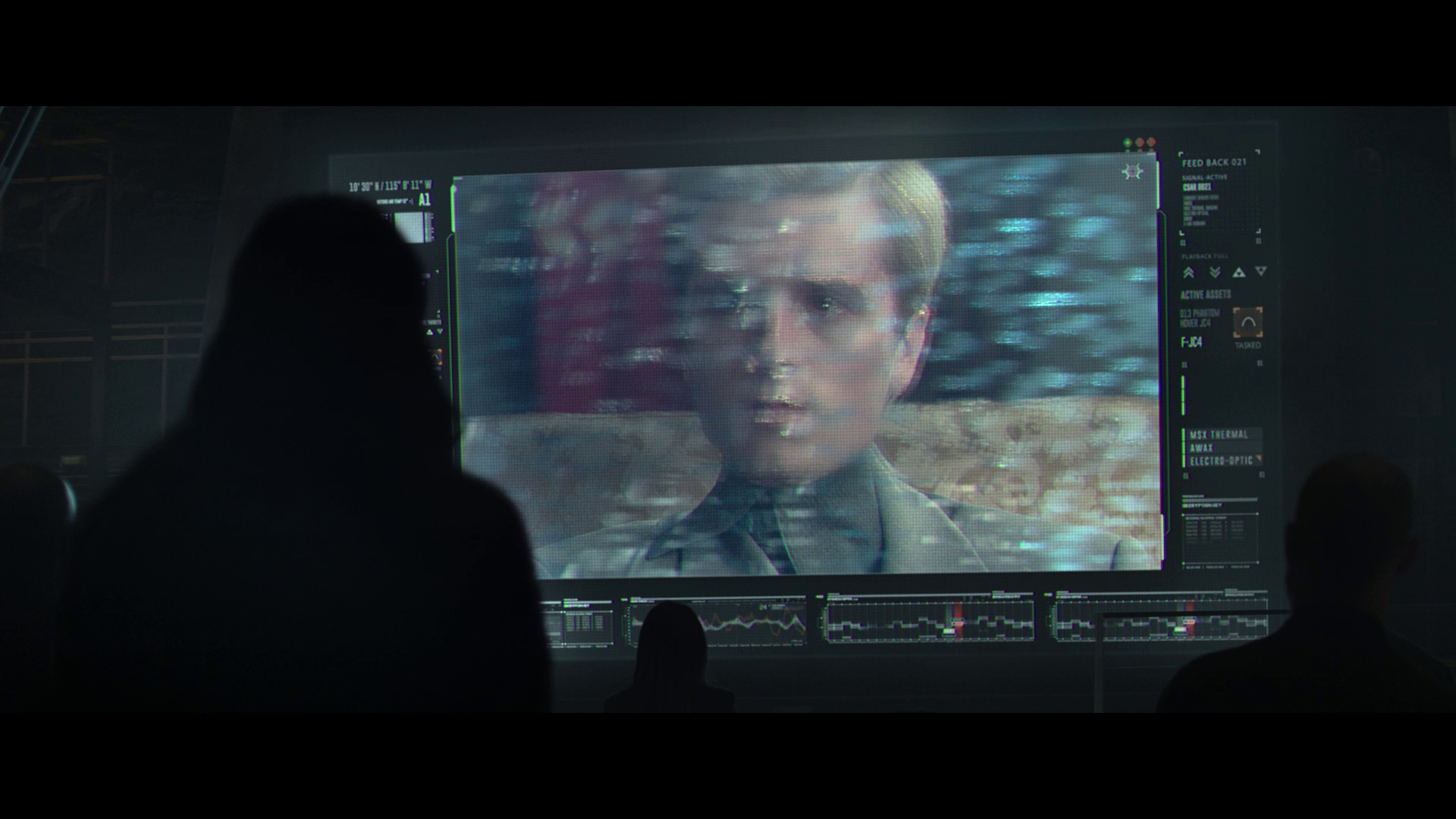 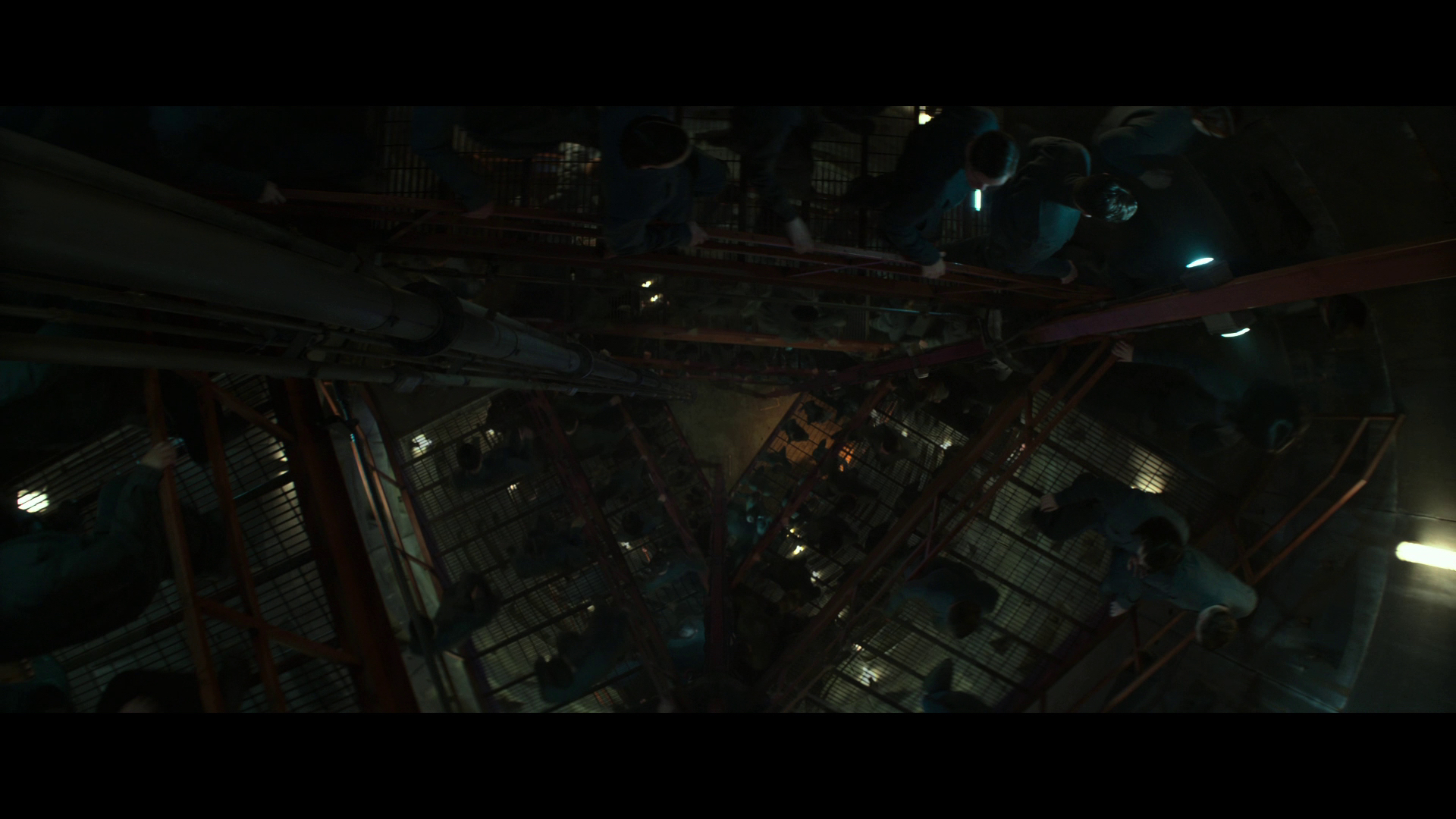 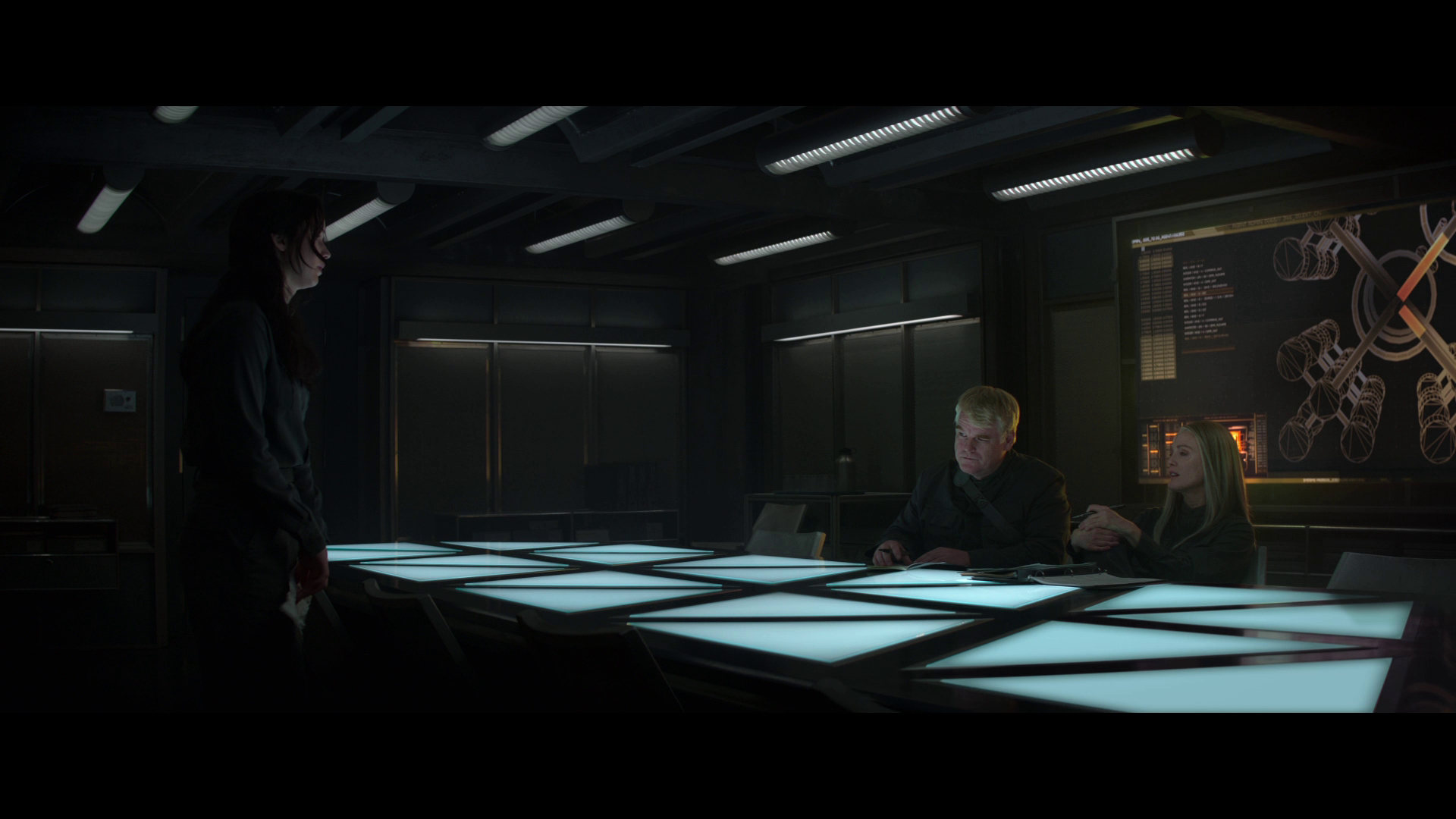 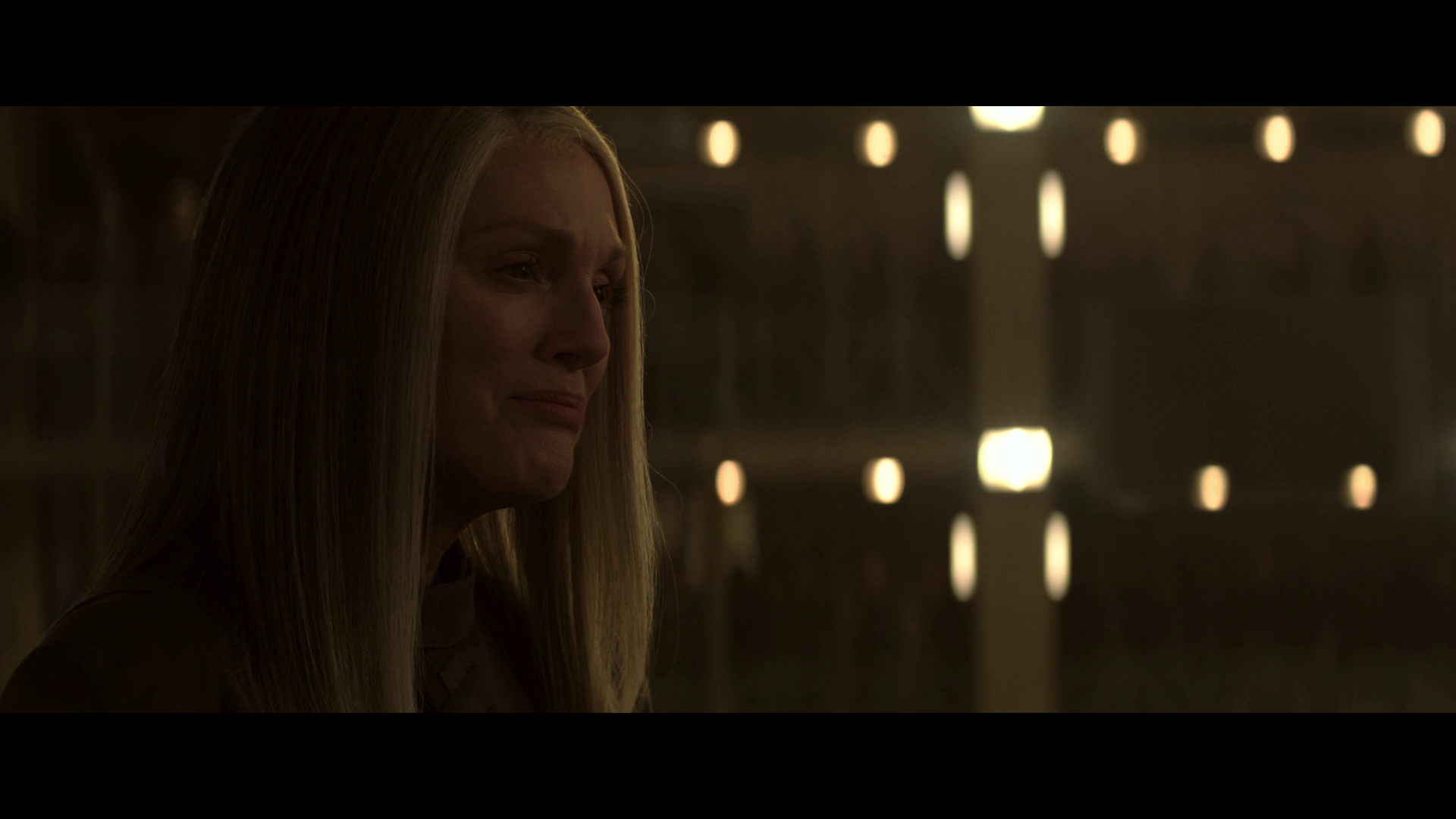 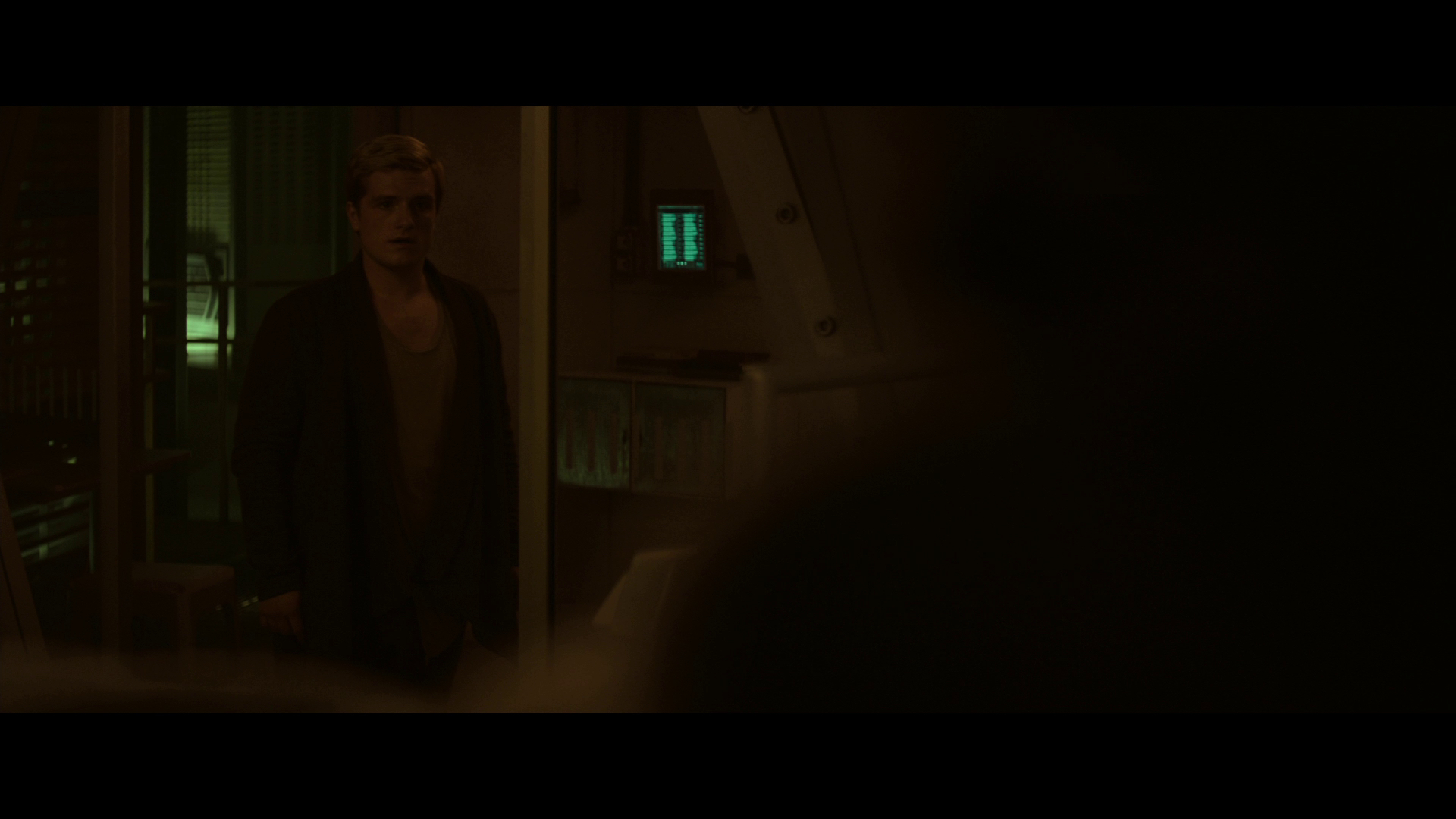 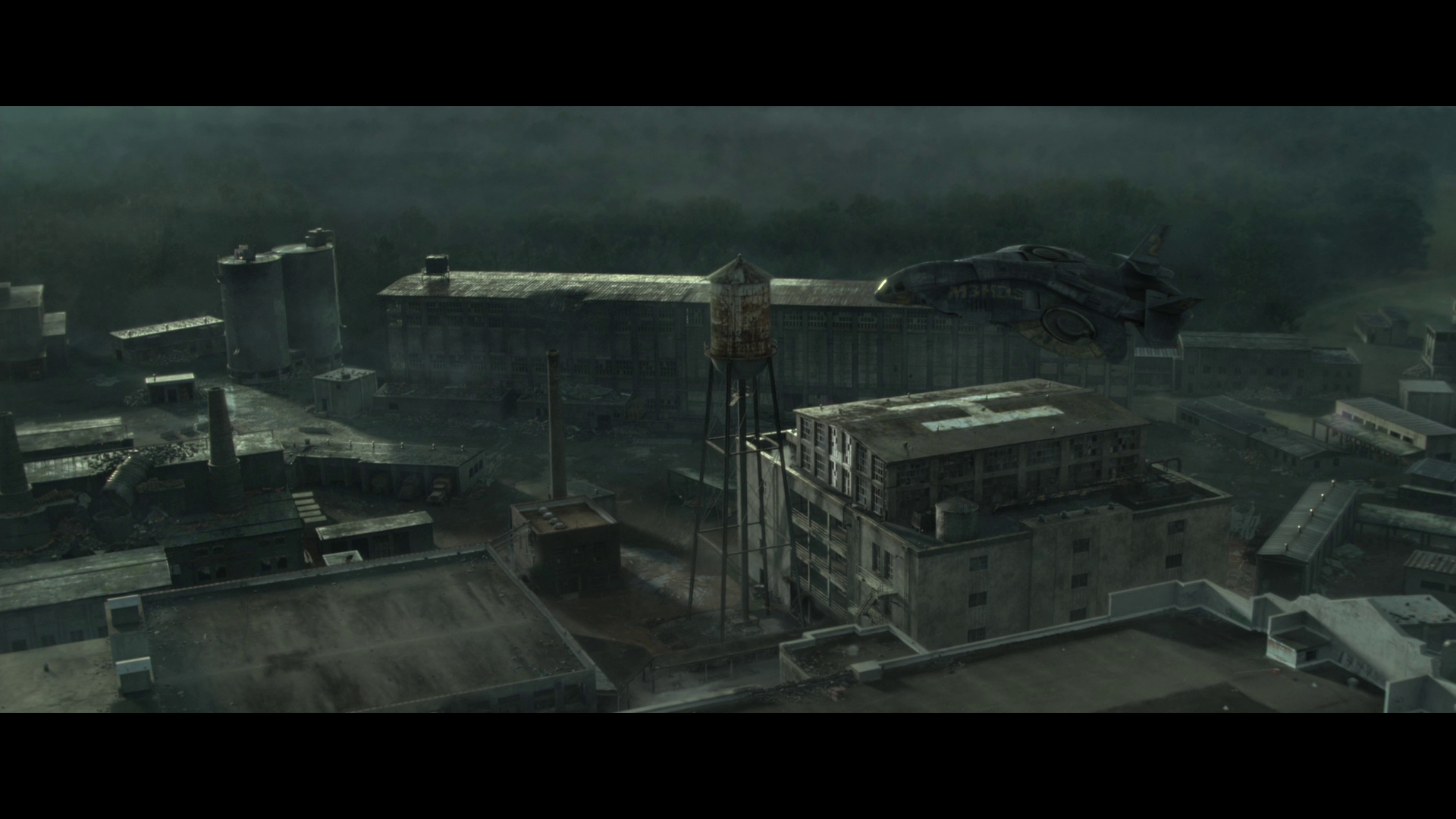 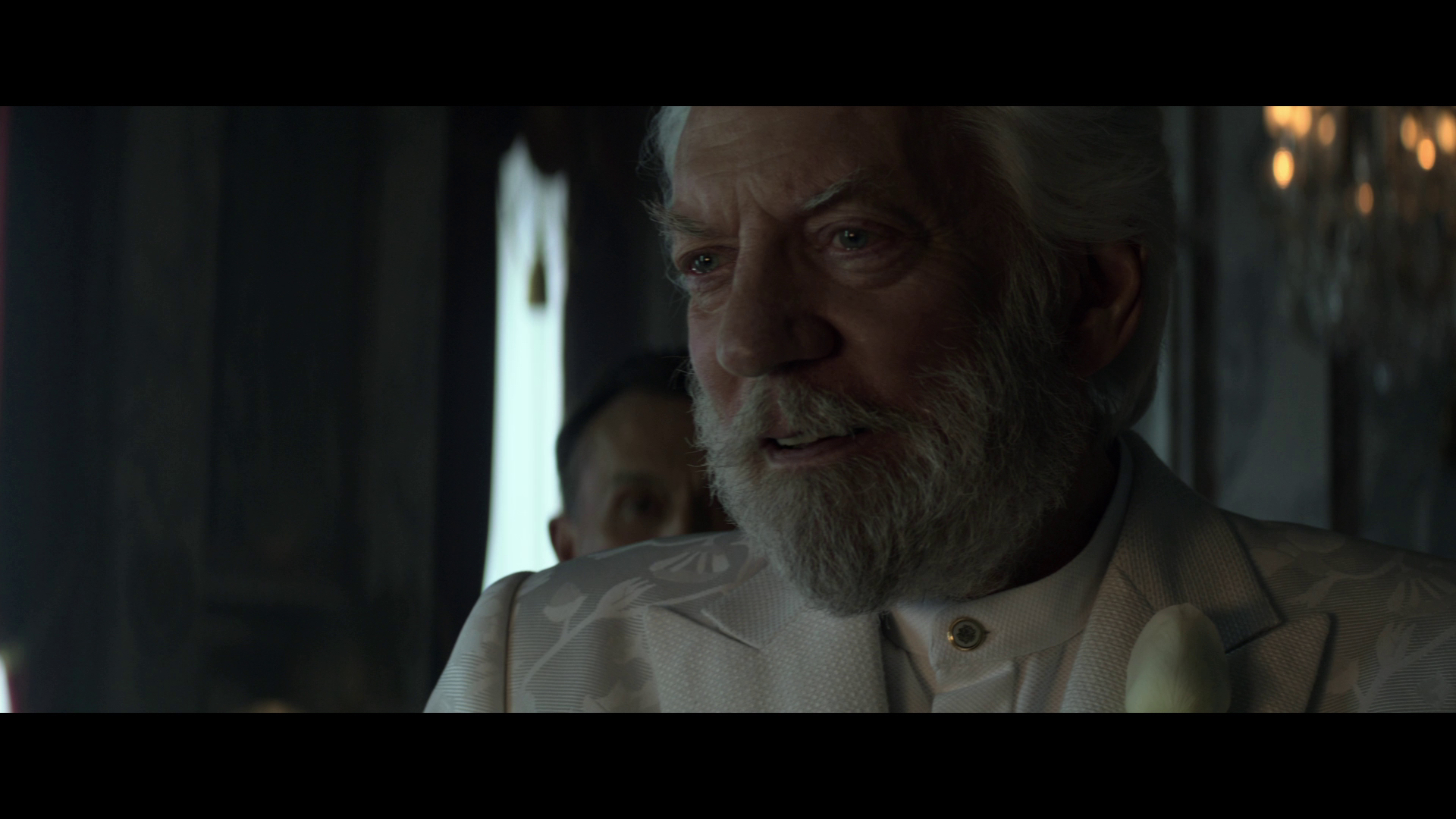 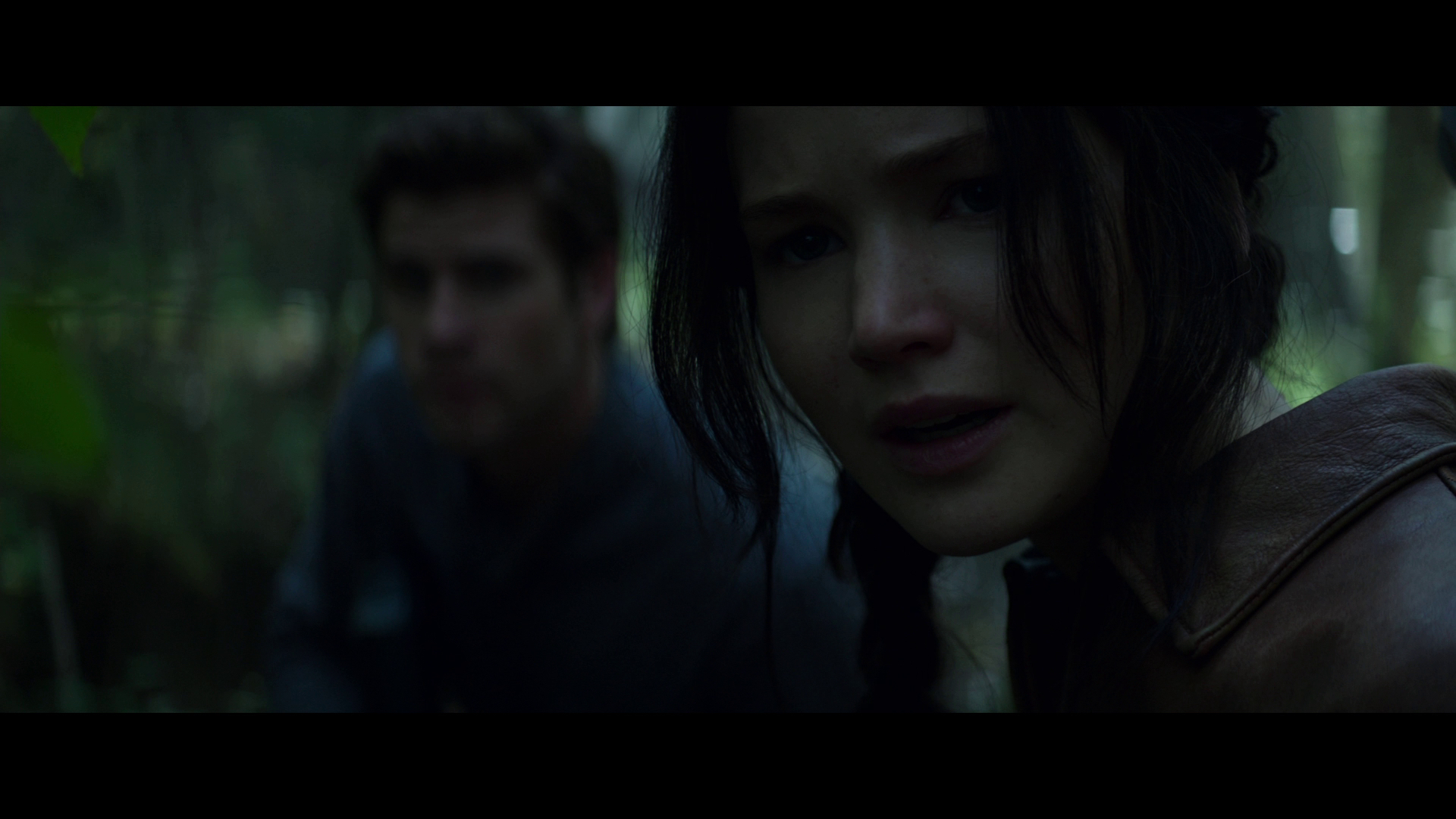 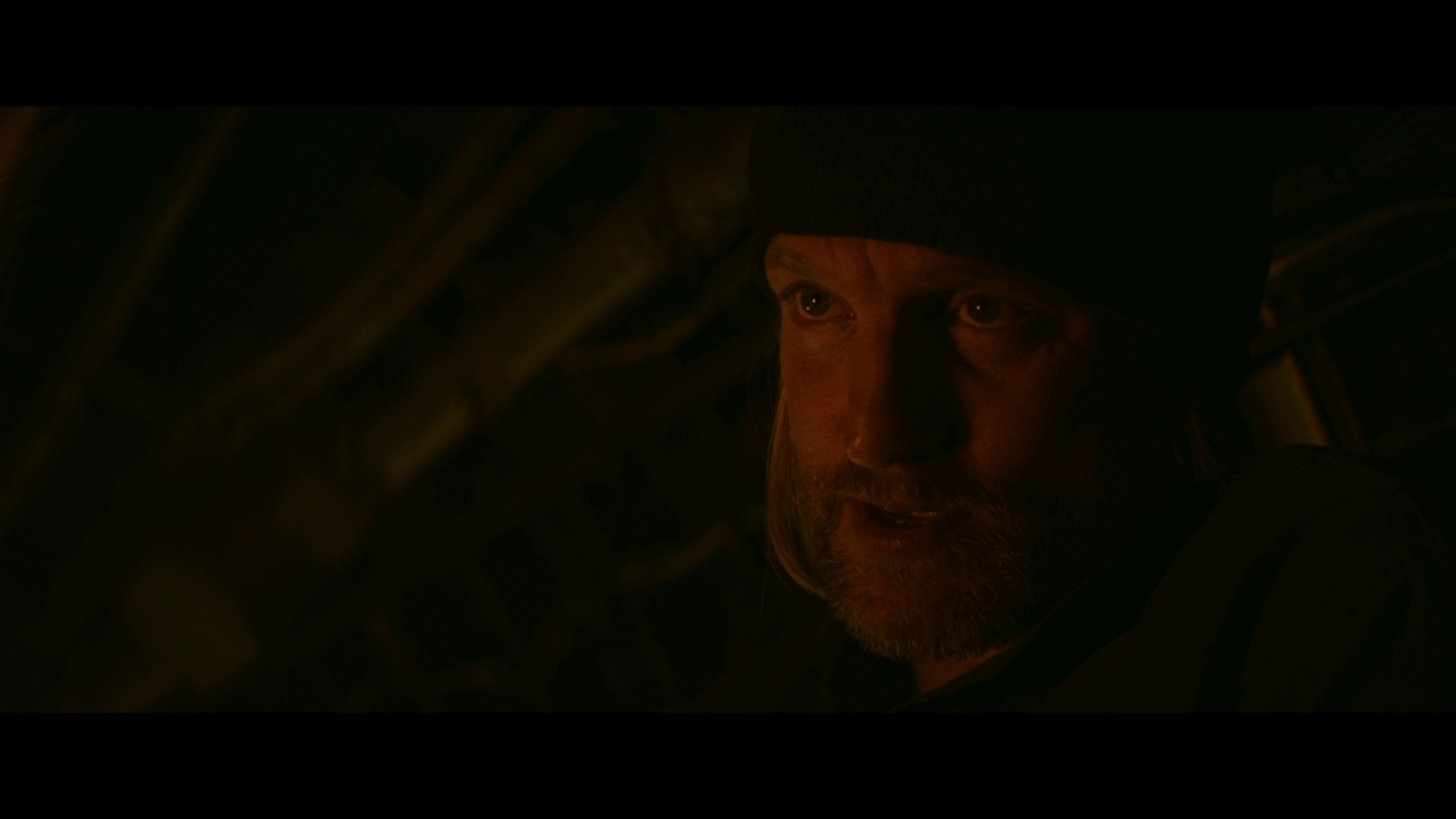 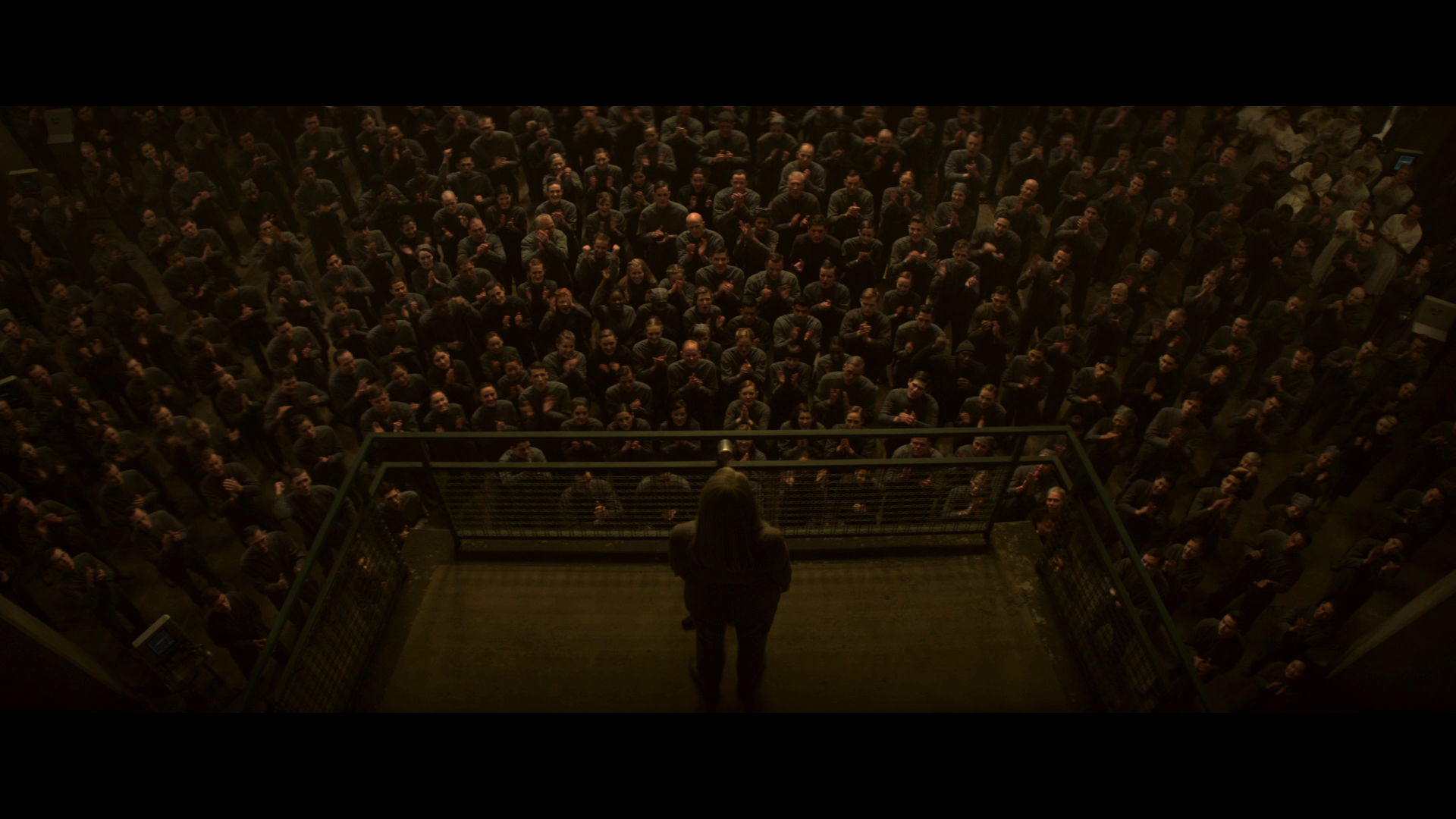 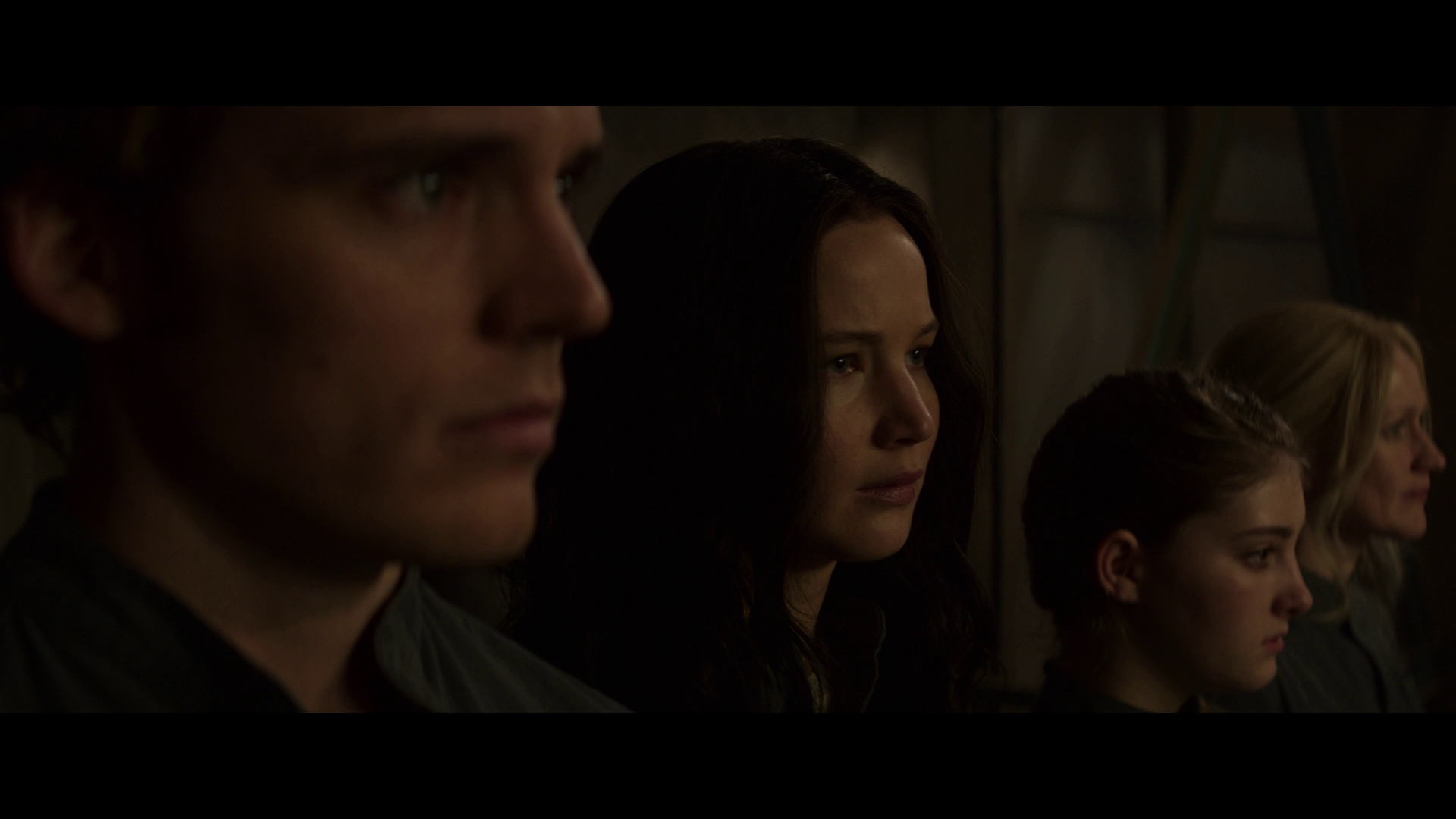 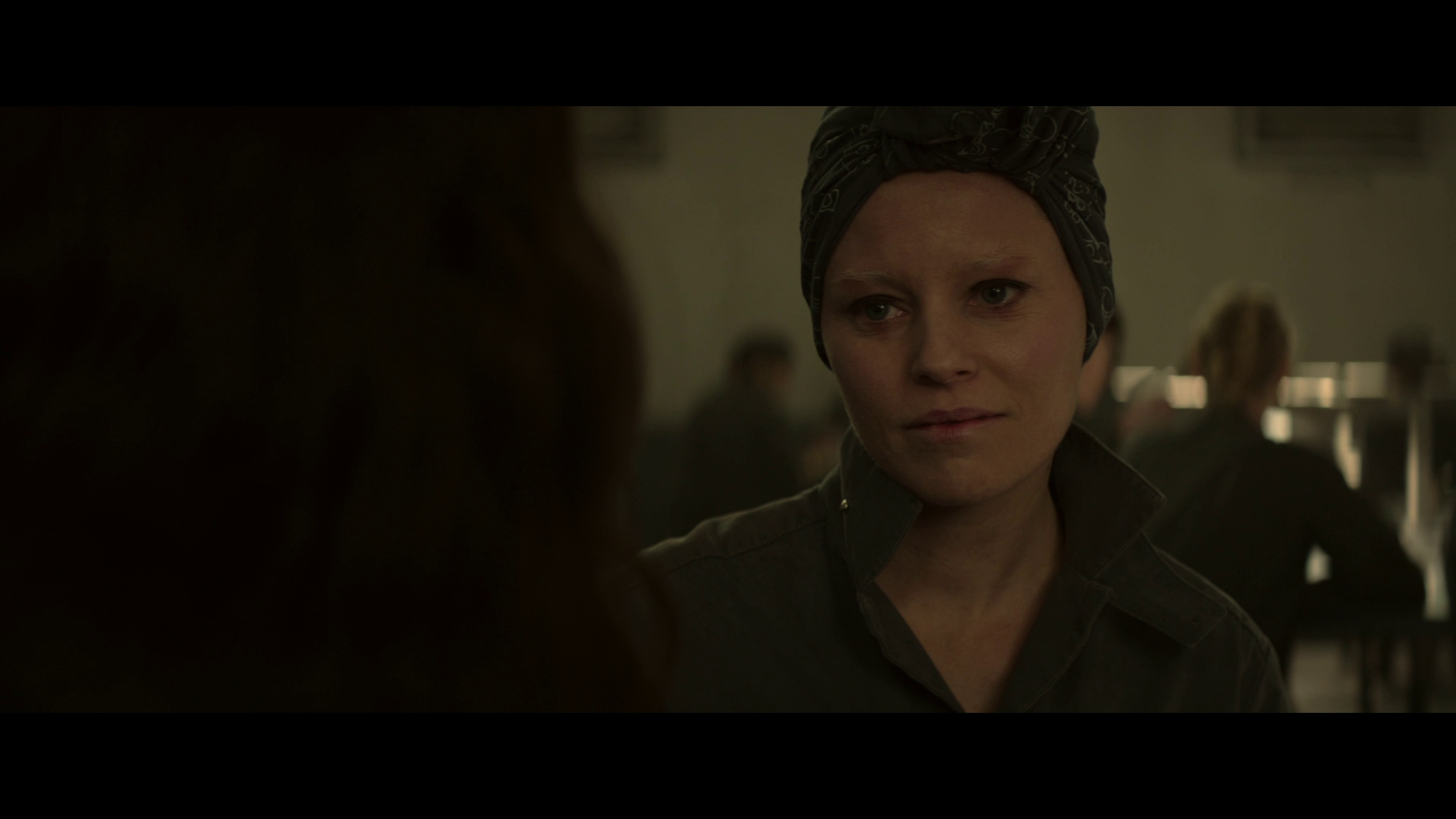