Happiness Of The Katakuris, The 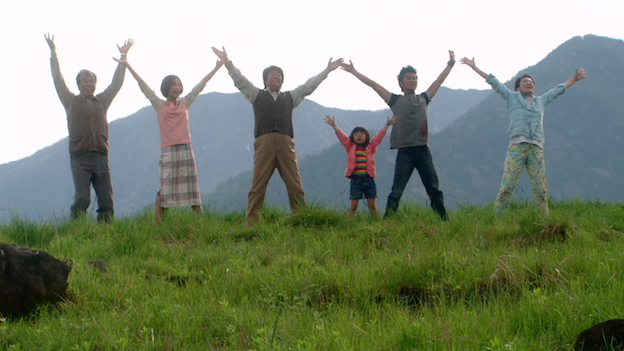 Takashi Miike is probably best known in the States as the director of Audition and Ichi the Killer, movies infamous for depictions of relentlessly gory violence. When a producer suggested Miike remake Kim Jee-Woon's Korean black comedy The Quiet Family in 2001, it could be assumed that he expected the director would put his "extreme" stamp on the material. Miike certainly did, but not by amping up the violence. Instead, he amped up the absurdity of the comedy, threw in some ramshackle musical numbers, and had Hideki Kimura provide Jan Svankmajer-esque stop motion animation to realize his most outlandish visual concepts.

The main throughline of the plot is prototypical dark comedy. A middle-aged dad, Masao Katakuri (former teen idol Kenji Sawada), decides to set up a bed and breakfast high in the mountains, as a project to bring his family together. However, he picked a godforsaken spot where there is no major road that leads to their guesthouse, so business is non-existent. When a guest finally arrives, the family is overjoyed... until they discover their first customer was just looking for a place to commit suicide. Worried that the bad news will spread, Dad convinces the rest of his family to bury the body and pretend like nothing happened. That would be easy enough, except that soon every guest who arrives starts ending up dead and the shallow graves by the lake start overflowing.

To his credit, Miike may have his characters enact cartoonish situations, but he allows them to be full-blooded characters with believable relationships. Masao and his wife Terue (Keiko Matsuzaka, Fall Guy) are incredibly sweet, and it's touching the way that Terue stands by her husband as things go from bad to terrible. Shinji Takeda plays their black sheep son, who has a history of petty crime and still feels like his parents treat as a suspect, especially when the wallet of the first corpse ends up missing. Naomi Nishida plays their grown daughter Shizue, who falls in love too easily with the wrong men and has a young daughter Yurie (Tamaki Miyazaki) to prove it. When Shizue meets an obvious con man, calling himself Richard Sagawa (rock star Kiyoshiro Imawano) and claiming to be a British secret agent, it's clear that this naive young woman is going to easily fall for his scams. Fortunately, her grandpa (Tetsuro Tanba, aka Tiger Tanaka from You Only Live Twice) -- who spends most of his time lavishing attention on the family dog Pochi and clobbering crows with thrown sticks in mid-air -- is suspicious of this unlikely Richard character.

With this pretty fleshed-out story as his foundation, Miike leaves himself open to go off on countless oddball stylistic tangents. This begins with an unforgettably strange circle-of-life animation in which a weird-looking winged sprite is pulled out of a teenage girl's soup bowl; the sprite then rips out the girl's heart-shaped uvula as she screams, only to be eaten by a crow, who lays an egg that hatches a new sprite, which meets it demise almost immediately. Elsewhere, he stages musical numbers which echo various familiar musical visuals: Masao and Terue get nostalgic in a plastic karaoke video, Michael Jackson's "Thriller" video is clearly the model for a number in which the Katakuris' dead customers get up and dance, while the conclusion -- often used as the poster image -- repurposes Maria's mountainside frolic in The Sound of Music as a family affair.

Unlike a traditional American musical -- or even Lars von Trier's Dancer in the Dark -- these musical and animated digressions are rarely motivated within the story. They are so blatantly out of place that they dare viewers to stay invested in the film. On the other hand, most of these sequences are unusual enough that you'll want to stick around just to see what nutso thing happens next.

Though it is often billed as a "horror-comedy," The Happiness of the Katakuris is less horrifying than it is cheeky and twisted. If you've made it through the "Live Organ Transplants" sketch in Monty Python's The Meaning of Life, there's nothing more unsettling or graphic than that here. If you like you like your comedy irreverent, inventive, silly, and dark, then it's time to say hello to the Katakuri family. 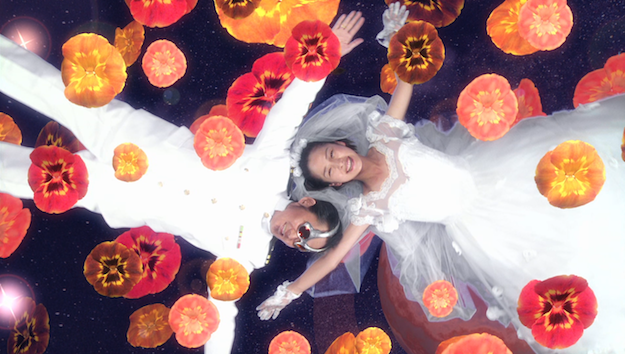 The Happiness of the Katakuris comes in a 2-disc Blu-ray/DVD combo. Both discs contain the same bonus material. The Blu-ray can be played in Regions A & B, the DVD will work in Regions 1 & 2. It comes packaged with an attractive booklet that includes an interview with Takashi Miike, as well as a few essays on the film -- including an essay on the music by DVD Talk's own Stuart Galbraith IV. Reversible cover artwork is also included.

The Video:
The Happiness of the Katakuris was shot on early HD video, and this AVC-encoded 1080p 1.78:1 presentation looks great, despite the limitations of the format. I saw Katakuris a few times in a movie theater, transferred to film, and mistakenly believed the production was shot on miniDV because it looked so muddy. Here, the colors are much more vivid and pleasing, and the clarity is a big improvement. Granted, the whites sometimes blow out, and Miike has clearly asked his frequent cinematographer Hideo Yamamoto to emulate a kind of soft TV soap look, but these slightly off-putting effects are part of Miike's warped vision.

The Audio:
The Japanese LPCM 2.0 stereo audio mix (with optional English subtitles) is effective without being elaborate. The dialogue is sharp and the songs are all cleanly presented.

- The first audio commentary included features director Takashi Miike and film critic Tokitoshi Shiota, who also appears briefly in the film. The pair tend to be laid back and joke around -- and they even sing along with some of the songs -- but they also provide plenty of informative comments. This commentary is presented in two versions: one is the original 2001 Japanese recording with English subtitles and the other is with American-sounding English-speaking actors performing Miike and Shiota's comments. While the English performance is an interesting experiment, the original Japanese voices are far more authentic. The newest commentary track comes from Midnight Eye's Tom Mes, who has written a few books about Miike. His track is low-key and a bit dry, but full of interesting material on the production.

Final Thoughts:
The Happiness of the Katakuris is a sweet-natured, dark-hearted, totally insane film. If you haven't seen it yet, you must rectify this error as soon as possible -- if only to have the story to tell your friends. Arrow offers a wonderful package that nicely compliments the film. Highly Recommended. 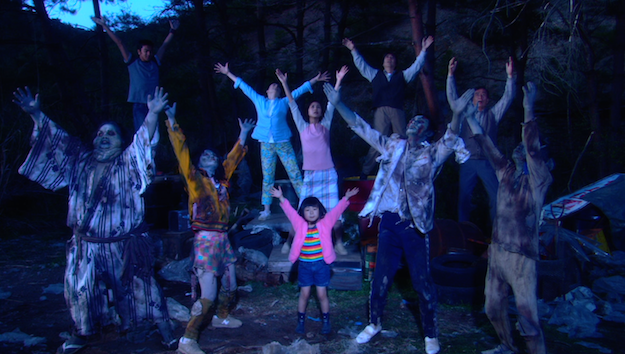