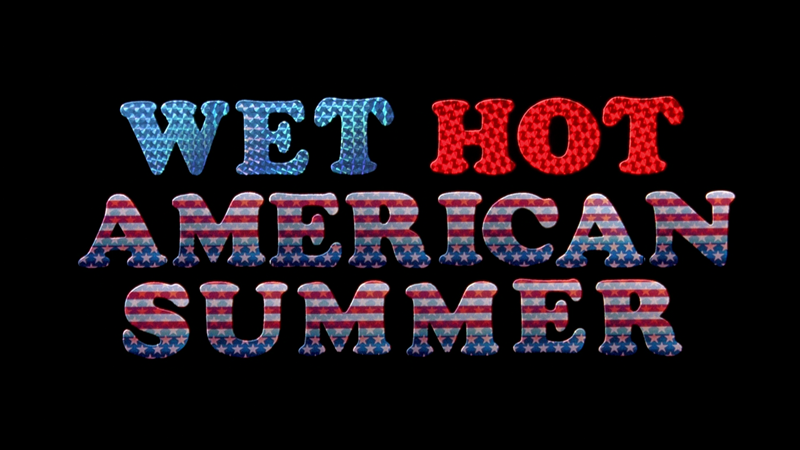 
The Movie
For a comedy troupe of its size, The State's batting average for creating stars was hugely impressive, with over 70 percent of the group becoming major, recognizable performers in their own right (let's just agree to not talk about who's in the remaining percentage.) And though they've gone on to successful careers of their own, decades after hitting it big with their own cult-favorite TV show, they still tend to work with each other on a regular basis, on TV and in films. 2007's The Ten, as close as we've had to a The State film, with the entire cast on-hand (in one way or another), unfortunately didn't show the team at their best. Wet Hot American Summer, on the other hand, is an example of the troupe's spirit shining through, despite the absence of Thomas Lennon, Robert Ben Garant and Kerri Kenney-Silver. The remaining members round out an ensemble of outstanding comedic actors, who, under David Wain's direction, puts on a terrific parody of the ‘80s teen sex comedy.

Wet Hot American Summer takes place at a summer camp in Maine, but it's not the campers who are the focus, but the young counselors who couldn't be bothered to watch over them and the older professionals too self-involved to do their jobs. As a result, there's a lot of messed-up stuff going on at this camp, like the death of kids (and subsequent cover-ups.) All the teens seem to care about is what's happening in each other's pants, with the possible exception of uber-driven drama leader Susie (Amy Poehler) and by-the-book Neil (Joe Lo Truglio). Though they do break away from their hedonistic pursuits to occasionally deal with the kids, including a robotic outcast and an unclean DJ, for the most part, they get in as much trouble as anyone else, especially during a trip into town straight out of Trainspotting. 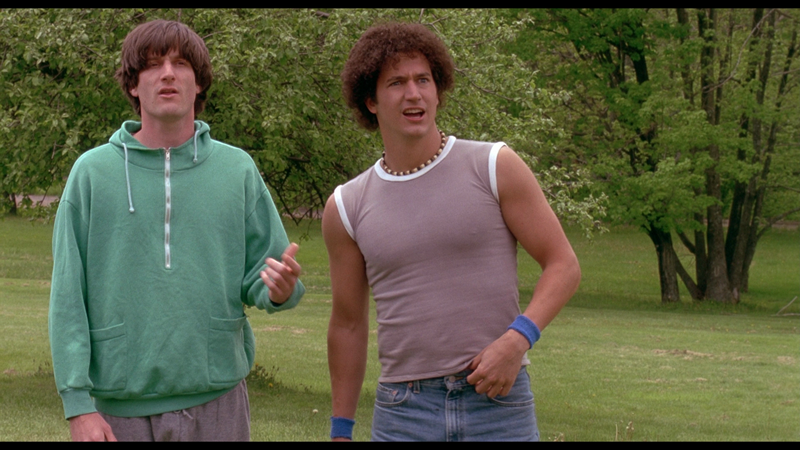 Episodic in construction, the film moves from one moment to another as the last day of summer ticks down, with little in the way of an overarcing plot, aside from doofy Coop (Michael Showalter) and his hopes to woo Katie (former Mighty Duck Marguerite Moreau), who unfortunately has eyes for camp bad boy Andy (a wonderfully boorish Paul Rudd.) Everyone else moves through their own activities, crisscrossing with each other as they play through the traditional camp film tropes, whether it's intercamp rivalries (wonderfully cut down with meta precision), obsessions with getting laid or worries about the big talent show. Though the "teens" (everyone's at least 10 years too old for the parts) get the best moments, the adults have their chances to shine as well, including Janeane Garofalo's neurotic camp director (and her adorably awkward flirtation with a local egghead [David Hyde PIerce]), an emotionally unstable arts & crafts counselor (Molly Shannon) and mental camp cook Gene (Christopher Meloni) who just about steals the show with his abuse of his assistant Mr. Kickass (A.D. Miles), his overly-audible asides and his arguments with canned vegetables.

The joy of the film is the way that it mixes a note-perfect parody of the ‘80s teen-sex genre, which gave us films like Meatballs, with an absurd sense of humor that allows anything to happen at any time. A game of capture the flag can morph into an overly emotional montage. A fun, bouncy montage becomes something much darker. Elizabeth Banks gets covered in barbeque sauce. People inexplicable run into walls. It's just that kind of movie, and with Wain at the helm, working from a script he wrote with Showalter, it readily embraces its wacked-out nature and plays it to the hilt, keeping viewers from getting ahead of the game (and the more subtle gags you may not catch without repeated viewings (like the secret handshake.) Everyone is having far too much fun, resulting in several truly memorable performances, especially from Ken Marino and Rudd, who gets to be perhaps the biggest jerk ever, with great lines like "You taste like a burger. I don't like you anymore." The only one of the film's stars who doesn't get a comedic highlight is Bradley Cooper, making his feature film debut, though he does take part in one of the film's most memorable subplots and scenes. 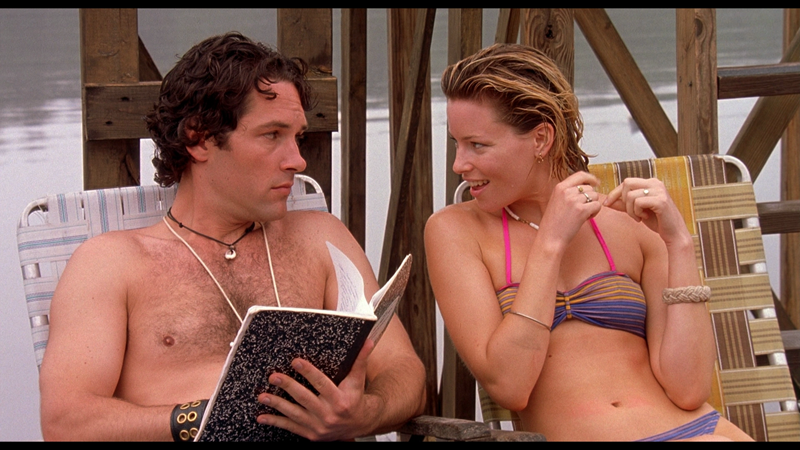 The Disc
The film arrives on one Blu-ray, packed in a standard-width, Blu-Ray keepcase. The Blu-ray actually doesn't have a menu, though a pop-up curve menu lets you pause the movie, select scenes, adjust the set-up and check out the extras. There are no audio options, but subtitles are available in English SDH and French.

The Quality
Once you get past the dark, noisy opening title sequence (which, though out of sync with the rest of the film, is a tremendous starting point for establishing the time frame) the 1080p, AVC-encoded transfer here is clean and well-detailed, capturing the period feel of the film well in the color saturation, black levels and film grain, resulting in a pleasing look that doesn't detract from the film in any way (though it suffers from the lack of sunshine during the shoot.) The level of fine detail is nice and high, showing off the many textures on display in the film, and the film has an overall sharp look, though there are a few bits of surprising debris in spots.

Befitting the film's low-budget origins and lo-fi aesthetic, the audio, delivered with a DTS-HD Master Audio 2.0 track, won't blow anyone away, but it doesn't experience any issues either, with no distortion problems evident. The center-balanced mix keeps the clean dialogue well-separated from films music, which is a big part of the film's overall atmosphere. Ambient sound effects are similarly well captured, but they're not really putting you in the moment.

The Extras
There are two new extras included with this Blu-ray release. The 31:33 "10th Anniversary Events Highlights", shot in Brooklyn in August of 2011, features several members of the cast (including some of the lesser-known actors) as well as several of the characters on-stage (and even Judd Apatow on video) sharing stories or generally talking about the movie in a very loose, often strange live show (which is exactly what you'd expect from anything related to Wet Hot.) Some of the material is a bit underwhelming, but there are some great callbacks to the film for fans to enjoy. One wonders if the full thing was even better.

The other new extra offers up scenes from the film, read by the cast (some, like Marino and Meloni, in costume) in collaboration with the Thew Thrilling Adventure Hour crew during the 2012 San Francisco Sketchfest (44:17). Some of the original actors (like Pierce, Garofalo, Banks and Cooper) apparently weren't available, so there are a few special guests filling in, including David Cross, Busy Philipps, Samm Levine, Colin Hanks, Bobcat Goldthwait, John Hodgman, Josh Malina, Gillian Jacobs, Marc Evan Jackson, Andy Richter, Bruce McCullough and Jessi Klein, making for an incredibly star-studded presentation (even if the performances don't have anything close to the energy of the movie, though a few, like Philipps, could have stepped right in without missing a beat.) Jacobs gets special credit for going BBQ-face for the reading.

Beyond those new items, the rest of the extras were found on the DVD (with the visual extras offered in standard definition), starting with a commentary track featuring Wain, Showalter and Garofalo. Either the filming brought the trio together or Garofalo has one of those personalities that integrates well with others, but the three have a natural chemistry as they share production stories, point out overlooked details and joke about the cast's least-regarded credits. There's a lot of background revealed for fans of the film (along with discussion of the best slow clap in cinema history) and it's all done in a way that's fun to listen to.

A 12:09 reel of deleted scenes can be viewed with or without commentary from Wain and Showalter. Many of these moments are extremely brief, so there's not much to say, but they do offer info on why scenes were cut and point out background jokes. Along with some improv material, you can enjoy a look at Meloni and Rudd's butts here, see what part Kenney-Silver was supposed to play in the film and check out an alternate ending.

Seven of the actors, Garofalo, Pierce, Shannon, Rudd, Meloni, Moreau and Showalter, along with Wain, offer some briefs thoughts on the movie in "Cast Comments" (8:02). The thoughts, which may be more "serious" than you might expect, cover a variety of topics, including characters, experiences and comedy theory. These can be viewed individually or as a group.

"Wet Hot American Summer: Behind the Scenes" is a 15:38 montage of footage from throughout the film's production. The main theme is the trouble the crew had with rain during the filming, but that's just part of the fun, as you get to see everything from moments that were cut from the film, to lighting farts to Rudd and Marino's juggling skills, as well as an update on the characters' stories from when we last see them in the film, which makes it a must-see for fans.

Four songs from the movie, 2 versions of "Wet Hot American Summer", "Summer in America" and the training-montage theme "Higher and Higher", are presented with production stills (11:09). Combining these elements is a great way to offer the two groups of content in an enjoyable way. A play-all option is available.

One of the more low-brow extras in film history is the "Extra Farts" track, which inserts gaseous emissions into the soundtrack. Impressively, the sound effects aren't inserted willy-nilly, placed to either tie into what's happening on-screen or take advantage of well-timed pauses. earning some legitimate, if base, laughter. If you don't smile when Shannon lets one rip, you're dead inside.

Also included is the film's theatrical trailer (1:50), presented in letterboxed, windowboxed widescreen. The tone is a bit too mainstream and several reveals are spoiled, making for a very awkward promo. 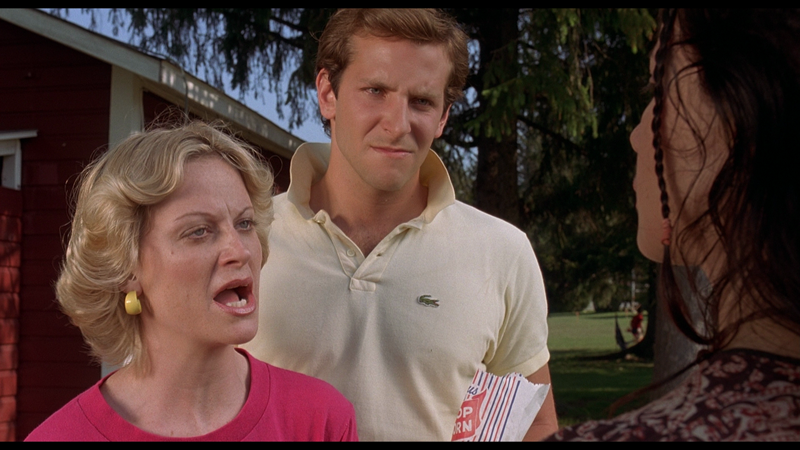 The Bottom Line
For a film that's got a silly sense of humor and a healthy cult following, Wet Hot American Summer rubs quite a few people the wrong way, but it's hard to imagine if you enjoy the comedy of The State or, you know, have a soul, that you won't enjoy the highly-quotable summertime shenanigans in this film. The quality of the disc is quite solid and the spread of extras should make fans very happy, adding in over an hour of fun new extras for those who already own the DVD. Fans can happily look forward to updating their collection with this release, while I go fondle my sweaters.