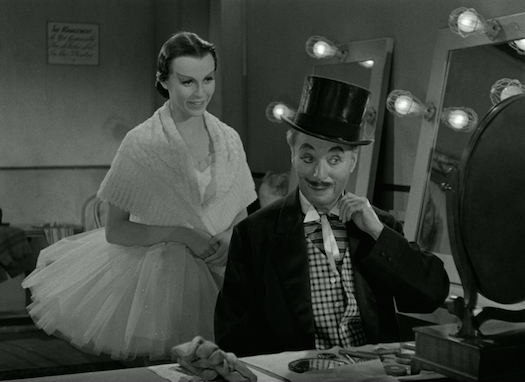 I remember being bored by Charles Chaplin's Limelight as a kid. Now, in defense of little me, I wasn't a complete philistine when it comes to Chaplin's serious side. In fact, I found the melodramatic aspects of City Lights incredibly touching as a young'un. Still, Limelight was a bit too sappy and long and didn't have enough Buster Keaton in it.

But times have changed. I've gotten older and have trained my thumbs to no longer reach for the fast-forward button automatically when a ballet sequence pops up in a classic film. And these days this 1952 effort (Chaplin's last in America) has risen mightily in my personal estimation, thanks to its clean and simple construction, its warm and affectionate approach to its characters, and certainly its endearing performances by Chaplin and a twenty-year-old Claire Bloom.

It's 1914, London. Calvero (Chaplin) is a music hall comedian far past his prime, frequently in a drunken fog, living in a shabby boarding house where he knows he can charm the landlady Mrs. Alsop (Marjorie Bennett) and skate by whenever he's behind on the rent (which is always). One day, he comes home to discover his downstairs neighbor, a beautiful "working girl" named Thereza (Bloom), has taken a sedative and turned up the gas in an attempt to end it all. Calvero saves her from this fate, but not from the wrath of Mrs. Alsop, who rents out the girl's room to someone else, presuming that Thereza doesn't do the kind of work that should be brought into a respectable house like hers. Calvero shares his room with Thereza while she recovers and learns that she's not a streetwalker at all, but an out-of-work ballerina.

Limelight is the story of two mirrored trajectories: the rising star, Thereza, and the falling one, Calvero. Calvero nurses Thereza back to health and builds her confidence to get back to dancing, and in the meanwhile he watches his career continue to crumble: his name is poison to producers, his agent tells him, and his latest performances inspire jeers and walk-outs. Chaplin allows us to imagine Calvero at his peak by showing the old comedian dreaming about being onstage, murdering imaginary crowds with silly songs and physical comedy routines about training acrobatic fleas. But Calvero seems convinced of the melancholy idea that the only dreams that will end up properly realized are those of his young ballerina companion.

Thereza's rise to stardom is meteoric, but she doesn't forget about Calvero. In fact, she's sort of superstitious in the way that she holds onto him. She gets him a part as a clown in her first big ballet, but that's not enough. She feels so indebted that she decides to marry Calvero. The clown repeatedly tries to disabuse her of this idea, partly because he doesn't want to tie her down at such a young age but one gets the feeling that it's also partly because he doesn't want to feel like a charity recipient. One might be tempted to chide the sixty-something Chaplin (however mildly) for writing scenes in which a beautiful young woman repeatedly declares her love for him, but the bittersweet way he constructs his story, these demonstrations do not feel like flattery. Chaplin offers a more suitable match for Thereza -- even if the character is initially resistant -- in the form of a young composer, played by Chaplin's son Sydney.

Apart from the music hall dream sequences, there are two performance setpieces which are best remembered from the film. The first is a glimpse of the ballet that makes Thereza's name, a Harlequinade scored by one of Chaplin's most famous musical themes*. This dance is a bit like the entire film in miniature, with the tragic storyline enlivened by some adroit physical comedy. The lithe Melissa Hayden stands in for Claire Bloom in these dance scenes, and more than convinces as a performer who could become the talk of the theatrical world. The second major performance within the film is Calvero's last shot at a comeback, a gut-busting musical pantomime that is the only on-screen collaboration between Chaplin and Buster Keaton. The two reportedly worked out the majority of the beats in their routine together on set, and each is perfectly in his element. Keaton deadpans as a frustrated Chaplin must deal with unruly musical instruments and even his own weirdly retractable legs (just watch it).

Limelight is a personal film, with clear connections to Chaplin's life, not least of which were his worries that he was an old man falling out of touch with his audience. It's odd to think about that, because viewed now, Calvero's "old-fashioned" comedy routines seem like the most timeless aspect of the film. The thing I also appreciate now, that went over my head as a child, is that Chaplin is as adept at constructing verbal drama in Limelight as he is with working out his visual ideas. Before his comeback performance, Calvero declares, "My home is the theater." Thereza then comments, "I thought you hated the theater." Calvero replies, "I also hate the sight of blood, but it's in my veins." Limelight did not succeed in resuscitating Chaplin's career commercially, but it is far from a failure. It is a vibrant expression of its creator's memories of the past and dreams for the future. 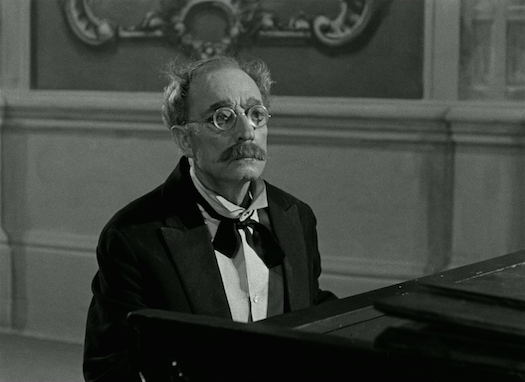 *The score to this film famously won Chaplin his only competitive Academy Award, twenty years after the initial American release, because of a then-valid loophole that the movie had never played in a Los Angeles theater until 1972.

The Blu-ray
Limelight comes packaged with a 40-page booklet featuring an essay by Peter von Bagh and an on-set account by Henry Gris.

The Video:
Another sterling restoration from Criterion, this AVC-encoded 1080p 1.37:1 transfer is nearly spotless, with tremendous depth and clarity. There's a wonderful range of grayscale with very good shadow detail. No digital compression issues.

The Audio:
The LPCM mono audio track shows its age a little more than the video, but the soundtrack has also been nicely restored. There is certainly no dramatic hiss or obvious damage to interfere with the dialogue or Chaplin's sumptuous musical score. One subtitle option: English SDH.

(HD, 21;10) - Chaplin biographer David Robinson provides an interesting video essay on the nearly twenty-year development of Limelight from a vehicle for Paulette Goddard to a Nijinsky biopic to a novel called Footlights to the film we know now.

Final Thoughts:
Chaplin has always been interested in mixing pathos with humor, but Limelight is something else. It's a drama about making comedy, which is tricky to say the least. It's a testament to Chaplin's clarity of vision as both a director and actor that he takes what could have just been a self-serving wallow in the mind of a merry-maker and transforms it into a truly touching, resonant story. Criterion's Blu-ray features an outstanding restoration, complimented by a solid mix of new bonuses and old. Highly Recommended. 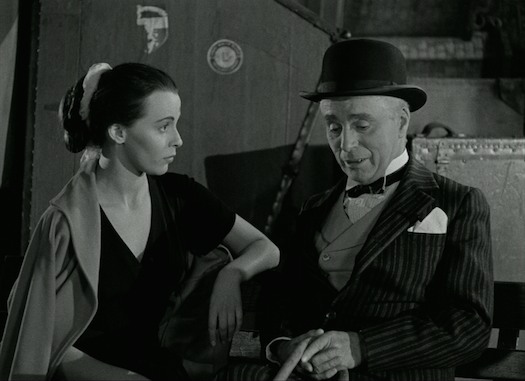