But now Timeless Media Group has licensed Thunderbirds in America, and their new Blu-ray release of The Complete Series is truly a wonder to behold while sold at the much more reasonable SRP of $69.97. (Though, as I write this, Amazon is selling it for just $42.45, a mere $1.33 per 50-minute episode.)

Thunderbirds was the fifth puppet series created by the husband and wife team of Gerry and Sylvia Anderson, using a sophisticated mix of marionettes and elaborate miniature special effects, all of which is extremely imaginative and innovative in terms of production design. The series overflows with believably functional scientific gadgetry, while the miniature effects are frequently better executed than that found in big budget movies being made at the same time.

Though set a hundred years into the future, the show's mid-'60s influence is apparent in the costume design and the art direction but, 50 years on, this look only adds to its primary-colored, '60s-a-Go-Go appeal.

Thunderbirds was popular across most of the world, including far-flung Asia, prompting two theatrical features, Thunderbirds Are Go (1966) and Thunderbird 6 (1968). But, inexplicably, ITC's Lew Grade was unable to sell the TV series to an American television network, and the two movies did disappointing business, prompting Grade to abandon Thunderbirds shortly into its second year while ordering an even more technically dazzling new series from the Andersons instead, Captain Scarlet and the Mysterons (1967-68). 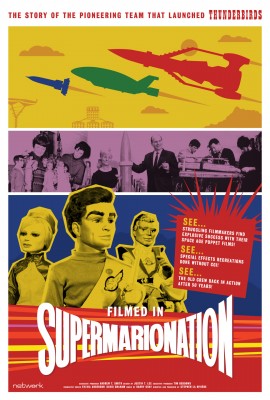 Some years back, I wrote that "Thunderbirds was a weekly orgy of special effects, but dramatically the show was rather bland, populated with one-dimensional characters (even after watching the show for years, this reviewer still can't tell one Tracy son from another) and repetitive situations. This problem extended to the Anderson's live-action shows. U.F.O. (1970-71) and Space: 1999 (1975-77) were quite remarkable from a production standpoint - the Anderson's series always had the look of fairly expensive movies - yet both were unbelievably dull and dramatically turgid. Thunderbirds, by comparison, is both more energetic and upbeat, with an engaging sense of scientific wonder and grand adventure."

I'm more forgiving now than I was then of Thunderbirds storytelling shortcomings while still arguing that at 50 minutes episodes are awkwardly padded. For this review I watched a big batch of episodes with my seven-year-old daughter, who was thoroughly entranced with what she saw, even when she didn't entirely follow the teleplays' emphasis and scientific concepts and occasional Bondian espionage. (Unsurprisingly, she liked Lady Penelope best, declaring, "I'm her!") Some of that innocent enthusiasm and excitement rubbed off on her father.

Watching it now, Thunderbirds has a certain quaintness in terms of its ideas of scientific progress. One episode revolves around a colossal, gas-guzzling logging machine that makes mass-deforestation a breeze, though another late series entry balances this out with what surely must be one of the first TV dramas extolling the benefits of solar power.

Just as animator Ray Harryhausen aspired to make his stop-motion creations as realistic as possible, the Andersons seem cut from the same, slightly misguided cloth. With each puppet series their marionettes become more lifelike and technically complex. In Thunderbirds, they're still much more cartoony than their movie-real surroundings, but if you squint just right you'll sometimes nearly forget you're looking at dolls on strings.

A big draw for audiences were the show's astoundingly elaborate miniature effects, all under the supervision of legendary effects director Derek Meddings. Reportedly the average episode of Thunderbirds contains 100 or so special effects shots, which consistently surprise and delight with their ingenuity. Except for the similar efforts of Japanese pioneer Eiji Tsuburaya, in both movies (like Invasion of Astro-Monster, Battle of the Japan Sea, etc.) and TV shows (Ultra Man and the Andersons-esque Mighty Jack), big budget movies, to say nothing of TV programs, wouldn't dare attempt miniature effects work on this scale.**

ITV, owners of Thunderbirds and other Anderson-produced series, released the show to Blu-ray in Britain back in 2008. That release, however, was widely panned for awkwardly reformatting the 1.33:1 series to 1.78:1 widescreen. Timeless Media's Blu-ray, however, happily presents Thunderbirds in its original, 1.33:1 screen shape. Most of Lew Grade's ITC shows were luxuriously photographed in 35mm, and Thunderbirds was no exception. The results are splendid, with the series' bright, primary colors really popping, while the extreme clarity of high-definition compels its audience to appreciate the program's incredible craftsmanship even more. (Wires manipulating the marionettes are slightly more visible in the process, but so what?)

The packaging lists only Dolby Mono audio, but in fact viewers have a choice between the show's original mono soundtrack and a DTS-HD 5.1 remix, which I confess to preferring because of its aggressive directionality and oomph, without really altering the fundamental personality of the original mix.

Supplements include an older documentary in standard-def, "Launching Thunderbirds, which runs about 45 minutes and provides a good overview on the making of the series. A vintage publicity brochure is included in PDF format.

Timeless's release of Thunderbirds is pretty timeless itself. In an era dominated by tiresome, repetitive CGI technology, the handmade yet often ingenious craftsmanship of the series really dazzles, and as my daughter's example demonstrates, today's generation of kids couldn't care less that Thunderbirds predates by decades these latest technologies. A real delight, still, and a DVD Talk Collector Series title.

**Kubrick's 2001: A Space Odyssey (1968) was, of course, the exception. I don't count Ray Harryhausen's stop-motion films as they matted live-action elements with his stop-motion figures, rarely employing Meddings-type miniature work.