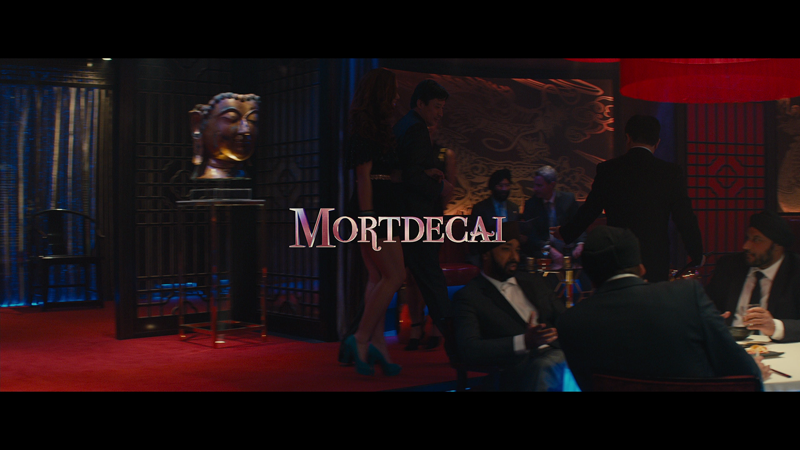 
The Movie
Imagine if the cast of Mortdecai, with Johnny Depp, Gwyneth Paltrow, Ewan McGregor and Paul Bettany, had made a movie in the late ‘90s (naturally with Miramax)?There's a very good chance that, as long as it didn't turn out to be 54, that it would be remembered quite fondly today. Fast forward about 20 years, and the results haven't turned out quite as well as one would have expected, as Mortdecai, based on cult novelist Kyril Bonfiglioli's character Charlie Mortdecai, has adapted Bonfiglioli's first book to cinema with underwhelming results, despite a high-profile cast. Perhaps starting from a script by the writer of the Lance Bass/Joey Fatone classic On the Line wasn't the first step toward greatness.

Other than that, the film looked to be on solid footing, with a solid, likable cast, a director with a decent track record in David Koepp (including Ghost Town and Premium Rush) and a character in Charlie Mortdecai (Depp) that at least seems interesting, seeing as how he's an aristocratic art dealer with a perchance for mischief, a sexy wife named Johanna (Paltrow), who gags at the sight of his facial hair, and Jock (Bettany), his hired muscle. But something got lost in translation between the books and the screen, as the actual adventure at hand, which sees Mortdecai get mixed up with a missing painting by Goya, travelling the world in search of answers and running from danger, is decidedly dull. Part of it is the fact that Mortdecai isn't an active character, a bit like a M. Hulot, bumbling his way through as those around him take action, particularly Jock, a walking libido who has to save his boss' bacon repeatedly. Depp seems to be having a ball playing the exaggeratedly disconnected would-be detective lost in a world of common people, but is leaving the audience out of his fun. 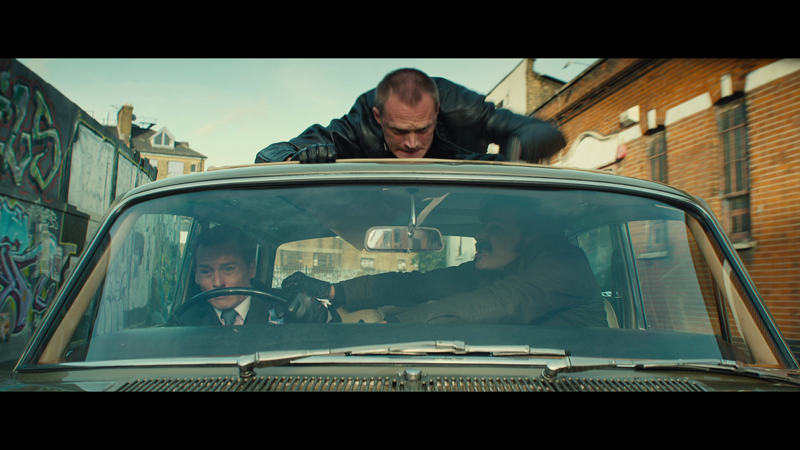 Very little in this movie works, aside from Olivia Munn's reliable hotness and a running subplot in which Paltrow works behind the scenes to conduct her own investigation, as Mortdecai is certain to fail at his. She is completely enjoyable as a whip-smart lady of class, well -aware that all men seemingly desire her, and using it to her every advantage, particularly when it comes to the enamored police chief McGregor plays. If the movie had followed Johanna as much as it follows Mortdecai, it would have possibly been a good time. Instead, we end up with a C-grade ‘70s Brit-com of a movie, giggling at itself for making yet another inane sex joke (though one does draw a laugh, again thanks to Paltrow.) Even worse, the film telegraphs its moments of "comedy", featuring punchlines visually before they come into play. On the plus side, the resolution of the mystery at the core of the film seems to actually make sense, but good luck caring about it at that point.

More than anything else this film gets wrong, it's the criminal misuse of Jeff Goldblum that's the most unforgiven. The tone that was attempted, an over-the-top sense of silliness, a parody of a caper film that could have maybe worked in the hands of a Peter Sellers (or perhaps an Austin Powers-era Mike Myers), was right in Goldblum's wheelhouse, as his awkward, tense-energy style plays perfectly in Mortdecai's world. But he's barely in the film, a blink-and-you'll-miss-him cameo that doesn't let him do much outside of make you wish he was in the movie more. That's probably Mortdecai's greatest skill: making you wish it was something else. 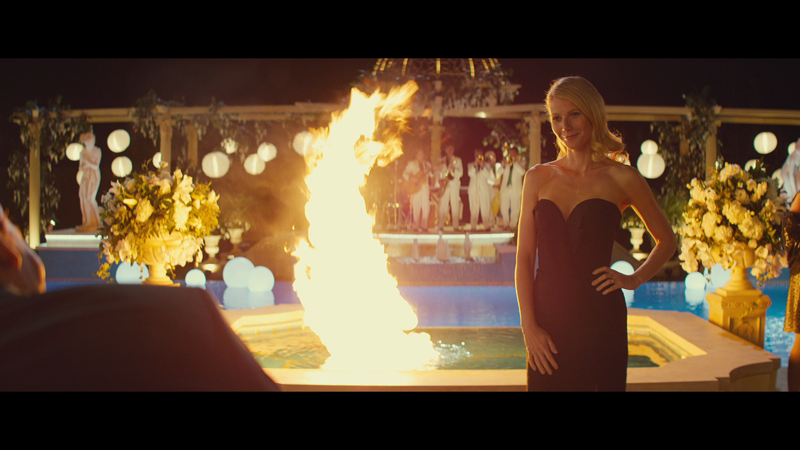 The Disc
The film arrives on one Blu-ray, packed in a standard-width, Blu-Ray keepcase, with a slipcover that repeats the cover art. The Blu-ray features an animated menu, with options to watch the film, select scenes, adjust the set-up and check out the extras. Audio options include an English DTS-HD Master Audio 7.1 track, a French DTS Digital Surround 5.1 track, as well as a DVS 2.0 track, while subtitles are available in English, English SDH and Spanish.

The Quality
Koepp and company may not have made a great movie, but they've made a great-looking movie, as the 2.40:1 1080p, AVC-encoded transfer does the trick for a movie that definitely focused on production value, coating every scene in waves of texture, with Mortdecai's terrible lip cozy looking sharp and well-detailed. Colors are rich and vivid, black levels are deep and fleshtones are consistently appropriate. There are no notable issues with digital distractions.

Though there's a lot to listen for in the mix on this film, including plenty of sound effects and a gorgeous Bond-meets-Bacharach score, the 7.1 DTS-HD Master Audio track seems like a bit much for such a presentation. Yes, there's some nice use of the low-end, in both the music and effects, and there's a good deal of atmospheric effects throughout the movie, it doesn't have that fill-the-room quality you expect from 7.1. Dialogue is clean and clear, and everything is well-separated, but this film doesn't seem to demand window-rattling sound.

The Extras
Surprisingly, for a movie that was universally panned, there are two relatively in-depth featurettes available. Up first is the 16:34 "Stolen Moments: On the Set of Mortdecai." Made up of on-set footage and interviews with most of the big names, this pieces provides some of the origins of the film, and talks about the production, with the unanimous opinion that the movie is hilarious and the cast had a great time making it (usually the kiss of death for a film.) The best part however is watching Paltrow break repeatedly when attempting to deliver one of the film's funnier lines.

Checking in at 12:25 is "The Art of Noise: Making Music for Mortdecai," which focuses on an interview with composer Geoff Zanelli, who talks about the process of writing the music for the film and collaborating with Mark Ronson on the movie. There are some interesting bits of info shared here, along with footage of Zanelli and Ronson jamming, including the instruments used and the ideas that went into crafting the score, as well as a discussion of the difference between songs and score.

In addition to a pile of Lionsgate previews, there are two trailers for Mortdecai here, a teaser (1:23) and the theatrical promo (2:33). Both are excellent at hiding what the movie eventually was.

Also included is a DTS-HD Master Audio Sound Check utility and a code for an Ultraviolet stream/download. 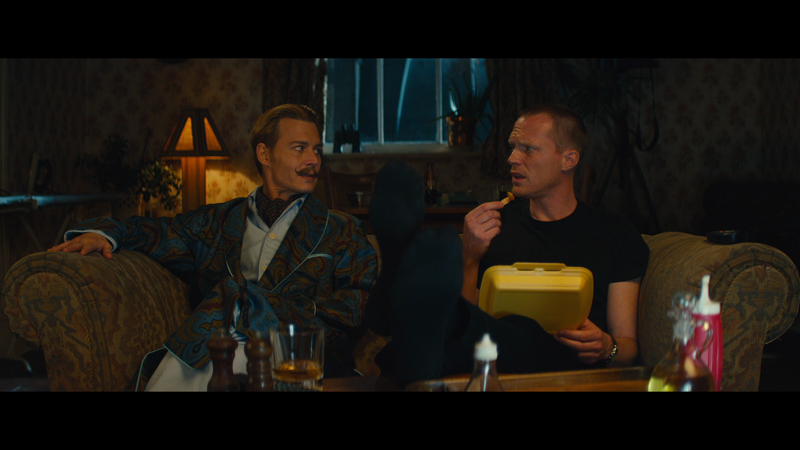 The Bottom Line
Coming in with an open mind resulted only in a swift kick to the metaphorical teeth, as Mortdecai lives up to its awful reputation, redeemed only by its style and Paltrow's entertaining performance. The Blu-ray looks and sounds great, and actually has a few nice extras to check out (whether you like the movie or not [spoiler alert: you won't.]) It's a bummer to see so much potential get dash against the rocks of what seems like a bit of a passion project on Depp's part.