Land That Time Forgot, The

Scorpion Releasing // PG // June 16, 2015
List Price: $29.95 [Buy now and save at Amazon]
Review by Stuart Galbraith IV | posted June 16, 2015 | E-mail the Author
No apologies. I adore the Amicus/AIP adaptation of Edgar Rice Burroughs's The Land That Time Forgot (1975). Like many of my generation, I had missed it in theaters, instead seeing it for the first time when the movie made its network television premiere on ABC a year or so later. In those pre-cable, pre-video days, comparatively recent movies could still attract big Nielsen ratings. Nonetheless, ABC must have been taken aback by the huge numbers tuning in to watch this relatively low-budget fantasy, with its patently phony dinosaurs and other dodgy special effects. If memory serves, it was rerun several times, and for a few years ABC regularly aired similar movies (The Last Dinosaur, At the Earth's Core, etc.), again to unexpectedly high ratings.

The picture is far too ambitious for its budget, reportedly a bit over a million dollars (cheap by 1975 standards), and it emphatically requires a suspension of disbelief, which came easy to the younger me of 40 years ago. Admittedly, partly my affection for The Land That Time Forgot is simple nostalgia, but as a late-middle-aged adult not jaded by the vitriolic influences of CGI and postmodern hipsterdom, I can recognize and acknowledge its many attributes as well as its modest shortcomings.

Scorpion Releasing's new Blu-ray of The Land That Time Forgot does the underrated film justice. The MGM-licensed transfer is excellent. In addition to its impressively sharp image, whomever did the transfer did a fine job timing the color and adjusting the contrast to minimize obvious matte lines and process work, which was much more apparent in previously released editions. 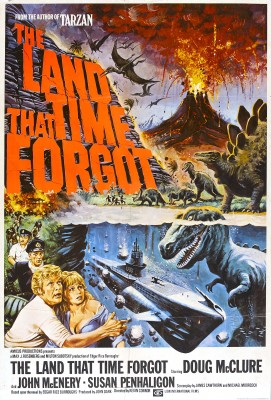 Told in flashback, the story begins with the sinking of a British merchant ship by a German U-boat in 1916, during the First World War. The handful of survivors, including (apparently) American Bowen Tyler (Doug McClure) and his English lover, Lisa (Susan Penhaligon), manage to seize command of the submarine when it briefly surfaces, but Captain von Schoenvorts's (John McEnery*) second-in-command, Dietz (Anthony Ainley), smashes the sub's radio and later tampers with its compass.

Lost and short on fuel, they stumble upon the South Atlantic continent of Caprona, where prehistoric dinosaurs and early man co-exist, and on which various stages of evolution can be traced the deeper one ventures into the continent's interior.

The German and British sailors, the latter led by Tyler, agree to a truce, eventually hoping to refine the crude oil they discover there. Meanwhile, they struggle to survive relentless attacks by all manner of dinosaurs and primitive men, capturing the friendly, Neanderthal-like Ahm (Bobby Parr) along the way.

Grabbing all the attention are The Land That Time Forgot's rudimentary dinosaurs, accomplished mainly via elaborate puppets with limited articulation. Back in 1974-75, stop-motion animation (as in the films of Ray Harryhausen) or men in costumes (as in Gorgo or myriad Japanese monster films) were really the only other options available. But special effects supervisor Derek Meddings had done incredible miniature work on various Gerry & Sylvia Anderson shows and movies (Thunderbirds, Journey to the Far Side of the Sun) and, in that sense, what he and dinosaur-sequences supervisor Roger Dicken (Alien) accomplish is really more an extension of that work.

Their dramatic staging and their integration with the live action compensate for what these effects lack in terms of photorealism. The screenplay, adapted by acclaimed science fiction/fantasy novelist Michael Moorcock, presents ideas never seen in "lost continent" movies before or since. For instance, when after dark a pair of Styracosauri threaten some of the crew, they signal the submarine to fire its big gun at the dinosaurs, whose bony neck frills shatter with each blast and one of the creatures is, graphically, killed.

Here and throughout the film, Moorcock's very intelligent adaptation subtly hints that the story's heroes deeply regret having to maim and kill such magnificent, long-lost animals, but have no choice if they are to survive. Indeed, for a movie usually incorrectly pegged as a kids' film, The Land That Time Forgot is unexpectedly bleak and despairing, drawing parallels between the modern-man-in-microcosm warring Germans and Brits, and the prehistoric men they, for much of the film, dismiss as inferior creatures. Ahm aspires to physically evolve to the next stage of human development, which the Germans and Brits assume is modern man, but the movie suggests the eternally warring Homo Sapiens are, in fact, an inferior anachronism.

Surprisingly, then, the movie is infused with the same kind of cynicism that so permeated some of the best ‘70s cinema. When Lisa criticizes von Schoenvorts for torpedoing a merchant ship and murdering innocent civilians, he points out that the ship exploded in such a way that it was, obviously, secretly carrying bombs that would have been dropped on his country, murdering innocent Germans. And without giving anything away, the picture has one of the bleakest, most dramatically exciting climaxes in all of science fiction cinema, even if the film's underfinancing damages its whole.

The success of the picture led to other period sci-fi/fantasy releases along similar lines: some were more juvenile and borderline campy (At the Earth's Core, Warlords of Atlantis) but a few were similarly dark and intelligent (The Last Dinosaur and the sequel to The Land That Time Forgot, 1977's The People That Time Forgot).

Presented in 1.85:1, 1080p widescreen, The Land That Time Forgot looks great, and as noted above, the transfer impressively times and balances everything with such care that once obvious matte lines and other process work is far less noticeable than in previous television airings and home video versions. The DTS-HD 2.0 mono audio, English only with no subtitle options, is robust for a 1975 mono theatrical release. The disc is region "A" locked.

The decent supplements include an audio commentary with director Kevin Connor moderated by Brian Trenchard-Smith; an original featurette from 1975, the kind of thing that would sometimes air as filler between the end of a network-presented movie and the eleven o'clock news; and a theatrical trailer, also in high-def.

The Land That Time Forgot has in spades what nearly all of today's science fiction and fantasy films lack: intelligence, deliberate pacing and, most critically, a sense of wonder. That it achieves all these things on a modest budget with barely-acceptable special effects, in one sense, makes its many accomplishments all the more remarkable. Without apologies or qualifications, this comes Highly Recommended.

* For decades I admired British actor McEnery's subtle and authentically German-sounding performance without realizing that he was dubbed throughout by another actor, busy German character player Anton Diffring.