Kino // PG // April 14, 2015
List Price: $29.95 [Buy now and save at Amazon]
Review by Stuart Galbraith IV | posted April 8, 2015 | E-mail the Author
Buona Sera, Mrs. Campbell (1968) is a pretty good farce somewhat uncomfortably straddling the comedy crossroads between an older, traditional Hollywood romp and the more permissive, European-influenced comedies that had gained a foothold on the American market during the 1960s. An essentially American movie filmed entirely in Italy, it's interesting mainly for its unusual cast, with a couple of terrific performances by actors playing roles very different from their usual screen personae. Melvin Frank (Road to Utopia, The Court Jester, A Touch of Class), usually but not here in partnership with Norman Panama, produced, directed and co-wrote the film, which was later the basis for the plot of Mamma Mia!. 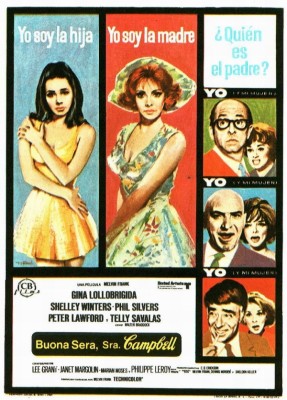 In the Italian city of San Forino, Carla (Gina Lollobrigida) has for the past 20-odd years been masquerading as the widow of fictitious American soldier Eddie Campbell (she named him after the soup company). This is protect the reputation of her now adult daughter, Gia (Janet Margolin), who was actually the result of one of three sexual encounters Carla had with American GIs over a 10-day period during the war. Carla has no idea which of the three fathered Gia.

The three now-middle-aged Americans - Phil Newman (Phil Silvers), Justin Young (Peter Lawford), and Walter Braddock (Telly Savalas) - each unaware of the other two, have all this time dutifully been sending monthly payments to support their Italian-American "daughter," a fact each has kept secret from their own family.

However, when their 293rd Squadron of the 15th Air Force stages a joyous reunion with the people of San Forino, all three men are naturally anxious to see Carla and meet their daughter for the first time, thus threatening to expose Carla's deception. At the same time, the rebellious Gia announces her plans to run off to Brazil with an older, married man.

Compared to standard late-sixties Hollywood comedy fare (Bob Hope's The Private Navy of St. O'Farrell, Jerry Lewis's Don't Raise the Bridge, Lower the River, Don Knotts's The Shakiest Gun in the West, all also 1968), Buona Sera, Mrs. Campbell is comparatively sophisticated and sprightly, though it never entirely lives up to its full potential.

The movie has a lot of bright ideas and nice little moments: the swarm of ex-GIs, now middle-aged tourists, happily reuniting with Italian families they encountered 20-plus years before when they liberated San Forino; their wives' bemusement of their husbands' giddiness; the wives' culture shock in far-flung Italy, watching mothers openly breastfeeding their infants, children urinating in the streets, etc.; the Americans' clumsy attempts to speak Italian; the Italians stashing away communist party flags so as not to offend their big-hearted visitors.

The best thing about the movie is the way it uses actors in ways different from their usual screen images. Particularly successful in this regard is the casting of Telly Savalas. Instead of playing his usual confident, swaggering man of the world, in Buona Sera Savalas plays a genuinely sweet and caring man who with wife Fritzie (Lee Grant) has been unable to conceive a child of their own. He clearly loves Gia, this daughter he's never met, and their brief scenes together are touching.

Similarly, Phil Silvers's familiar Sgt. Bilko persona is held in check. Here he's just an ordinary family man, the father of three high-maintenance boys. For him the idea of having a mature, lovely daughter he can be proud of is likewise appealing.

Besides Savalas, contemporary reviewers also took note of second-billed Shelley Winters's fine comic timing as Shirley, Phil's naïve, scatterbrained, pushy, sentimental, but generous wife. Winters had spent most of the past decade doing serious films like The Diary of Anne Frank and A Patch of Blue, but had recently turned to comedy, having appeared on TV's Batman (as Ma Parker) and in Carl Reiner's Enter Laughing shortly before this.

Another surprise is the presence of French actor Philippe Leroy, one of the stars of Jacques Becker's Le trou (1960), playing Carla's current boyfriend. Unfortunately, for Buona Sera, Leroy's entire performance was dubbed by another actor. The IMDb and the movie's credits don't identify the voice, but it sure sounds like Robert Rietty, who dubbed hundreds of international productions, perhaps most famously several of the James Bond movies. (He was the voice of Emilio Largo in Thunderball, Tiger Tanaka in You Only Live Twice, Blofeld in For Your Eyes Only, etc.) Leroy's character is supposed to be French but the Italian-born Rietty gives him a kind of generic Continental accent that vaguely sounds more Italian than French. Further adding to the confusion, Rietty's voice also dubbed at least four other Italian characters in the movie, all of which pretty much sound the same.

Riz Ortolani's delightful score aids the movie's European feel considerably, the composer best known for his Mondo scores for Jacopetti and Prosperi and, later, for music tracked in several Quentin Tarantino films. His title song, with lyrics by Frank and performed by Jimmy Roselli, is particularly good.

As for Lollobrigida, she's fine but the character is in some respects the movie's weakest link. The script makes some effort to justify her deception, she wanting to provide her daughter with the best schools, etc., but she never really comes off as entirely sympathetic, leaving all of the viewer's interest leaning heavily on the three men she deceived rather than in her own plight.

Buona Sera, Mrs. Campbell's 1.85:1 1080p transfer disappoints. It's grainy and soft at the same time, the image only sporadically coming to life with high-def clarity, though the color (original prints by DeLuxe) is bright and accurate. The DTS-HD mono (English only, with no subtitle options) is fairly good, and the disc is Region A encoded. Note: The 108-minute running time listed on the box is incorrect. The movie runs 112 minutes.

The lone supplement is a pretty good trailer, also in 1.85:1 widescreen and high-def though similarly dupey and unimpressive visually, though it sells the picture well.