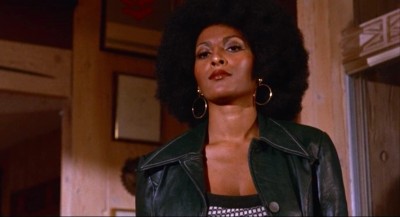 If you only have time to watch one of these famous Pam Grier vehicles, your choice simply depends on what you want to get out of the experience. In a purely technical sense, both films are equal in quality, but slightly different in narrative approach. While Coffy had a more melodramatic tone as it took the anti-drug messages a bit more seriously, Foxy Brown amps up the exploitation part of blaxploitation and brings a more lightheaded and perhaps unintentionally campy approach. The graphic violence and the heavy-handed anti-drug content are still there, but they're delivered with a bigger emphasis on classic blaxploitation tropes.

The lighter tone of Foxy Brown becomes apparent from the opening credits, which shows Grier winking at the camera while dancing in front of some groovy and groovily cheap optical effects. This credits sequence is essential in understanding where the many parodies, the most recent of which was the opening credits to Superbad, come from. The gritty opening of Coffy is then replaced with a plot out of Mission Impossible: Foxy Brown's (Grier) police officer boyfriend gets facial constructive surgery in order to hide from the mobsters he informed on. After Brown's opportunist brother (Antonio Fargas) rats on them, the boyfriend ends up dead, and Brown takes a page out of Coffy's handbook by going after the mobsters by pretending to be a prostitute. Couldn't Hill at least have written her as an undercover stripper this time around for diversity sake?

The predictable mayhem ensues as Brown and the mob leave behind an equal number of corpses in order to reach their goals. The lack of a more dramatically credible approach is covered by the presence of some highly amusing moments, some of them intentional, some of them not, as well as some welcome additions to the cast. Always exuberant and energetic, Antonio Fargas is one of those character actors who makes any project he appears in twenty percent better simply by his presence.

As Foxy's shifty brother, he gets some choice moments as he parties with the money he got as a rat. In that way, his character is similar to the hedonistic idiot he played in Across 110th Street. The great Sid Haig also shows up as a pilot with a perfectly groomed Yusuf Islam beard. Grier's 70s black power look is more iconic than her part in Coffy, otherwise the characters are identical.

The fantasy parts of the revenge fantasy elements are also ramped up as all kinds of racist and sexist a-holes get picked off in very painful and very creative ways. My favorite is a man who gets sliced in half by airplane wings. You can of course tell that they used a dummy, but for the time and the budget, it's a very decent effect.

After watching Olive Films' scratched up transfer of Coffy, I was pleasantly surprised to find a very clear 1080 presentation this time around. Some scratches and dirt are still there, but Foxy Brown looks better than it probably ever did, with vibrant and exuberant 70s colors (Those costumes man, those costumes!) represented perfectly.

Coffy was offered with a mono presentation spread out to two channels; so again I was surprised to find a DTS-HD 5.1 transfer on the Foxy Brown Blu-ray. The tinny dialogue comes off clearly through the center speakers and the most important part; the funky score by Willie Hutch will effortlessly put your surround system in a groove. As it is with other Olive Films releases, no subtitles are offered.

We get bamboozled by the man and get absolutely nothing.

If you want to see a film that rides the line between blaxploitation and early 70s American indie, watch Coffy. If you need your 110% blaxploitation fix with all of the iconic traits of the genre, check out Foxy Brown.