Mark of the Devil

It would be a vast understatement to say that Mark of the Devil is not for all tastes, for it is a genuinely and relentlessly sadistic movie. In America, it was advertised as "positively the most horrifying film ever made" and "guaranteed to upset your stomach." Allegedly, no one was admitted without the vomit bags that were freely provided. Nonetheless, in America, "All Ages Admitted."

Neither it nor its inspiration, Witchfinder General, were really horror movies in the usual sense. The former was an extremely violent but legitimate period drama, an excellent if extremely grueling film featuring one of Vincent Price's best performances. Horror fans tend to admire it greatly though it's not the kind of picture one particularly wants to revisit. Contrastingly, Mark of the Devil is pure Grand Guignol. Though it apes Witchfinder General's plot and period, the movie's approach and its aims are more along the lines of a subgenre of genuinely sadistic movies traceable at least as far back as the Herman Cohen-produced Horrors of the Black Museum (1959). Mark of the Devil makes that movie look like a picnic.

Arrow has meticulously reinstated the longest cut of the film with all its depraved violence, in both English and German. The disc is crammed with extra features. 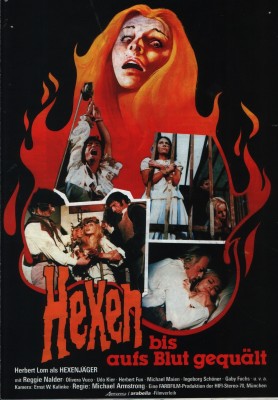 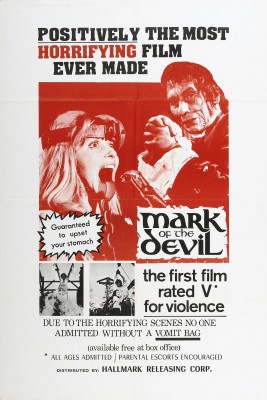 Not to worry, kiddies: "All Ages Admitted."

The film's plot is pretty similar to Witchfinder General. Government-appointed, Church-approved Lord Cumberland (Herbert Lom) and protégée Count Christian von Meruh (Udo Kier) arrive in an early eighteenth-century Austrian city to assume witch-finding duties, a task previously undertaken by Albino (Reggie Nalder), who's in it purely for the pleasure of raping women, stealing money, and torturing innocents of both sexes.

Cumberland and von Meruh are horrified not so much by Albino's methods of extracting "confessions" of witchcraft and devil worship so much as his lack of following proper procedure (filing indictments, filling out the proper paperwork, etc.) and Albino's insincere attitude toward their Holy duty.

There's an endless parade of torture and executions, though the plot primarily concerns the fate of three among the accused: Vanessa (Olivera Katarina), a barmaid Albino accuses of witchcraft after she spurns his slovenly advances; Baron Daumer (Michael Maien), a wealthy heir whose property the Church secretly covets; and Deidre (Gaby Fuchs), a saintly nun raped and impregnated by a salacious bishop.

In one sense, Mark of the Devil actually makes a legitimate, intelligent point for a movie so overtly exploitative. Albino rapes, steals, tortures, and executes completely innocent people while Cumberland rapes, steals, tortures, and executes people with "due process," via institutionalized inhumanity. Albino looks like a monster, the Devil himself (Nalder's real face was horribly disfigured in an accident), while Cumberland is comparatively handsome, dignified, and obviously intelligent. Yet he's unquestionably the more monstrous because he's completely aware of his hypocrisy. When his men foolishly arrest a family of pious puppeteers, Cumberland knows full well that the charges against them are completely absurd, yet forges ahead to have them brutalized and executed because to admit a mistake would make his office appear soft. Baron Daumer is tortured only because of his stubborn refusal to surrender land rightfully his to the Church. Cumberland himself is impotent, clouding his judgment of women.

The movie, though, is chiefly interested in parading as many gruesome scenes of torture, mutilation, and grim executions (witch burnings, beheadings, etc.) in front of its camera as it can. Gaby Fuchs's character in particular undergoes one horrific act after another. An almost unbearable scene of her on the rack is followed by the picture's most infamous moment, when her tongue is ripped from her mouth.

Technically, Mark of the Devil is sloppy in some respects (modern electrical wires and street signs are occasionally visible) while cleverly overcoming its budgetary restrictions in other ways (the use of locations in Krems and Mauterndorf, Austria, as well as Castle Moosham, in Salzburg make it seem more lavish than it is). The acting is generally good, particularly the subtle performance by Herbert Lom, whose real voice is heard on both the English and German tracks. Less successful is the anachronistic, popish score by German singer Michael Holm, music better suited to a Mondo type documentary.

Filmed in 1.66:1 widescreen, Mark of the Devil is presented uncut in both German (with English subtitles) and in English. The title elements are all in English, including a strange insert that seems particular to the U.S. release version. The film's most graphic scenes are very slightly grainier than the bulk of the film, though this is barely noticeable. The mono German audio is noticeably cleaner and clearer than the English track, though as noted above star Herbert Lom provides his own voice for both versions. (It's clearly not Nalder's voice on the English track.) Two different subtitle tracks are offered, one apparently a transcription of the English version (for the deaf and hard-of-hearing), the other a more precise and newly translated version of the German.

Supplements abound. There's an audio commentary by Michael Armstrong, moderated by Calum Waddell. Armstrong is the credited director, though as members of the cast make clear in interviews, he and producer Adrian Hoven fought constantly and openly, screaming at one another on the set, and Hoven uncredited actually directed a large portion of the film.

The bountiful extras continue with: "Mark of the Times," a feature-length documentary about the genre's "new wave" of horror directors during the late 1960s and early ‘70s; "Hallmark of the Devil," a featurette with writer Michael Gingold talking about American distributor Hallmark Releasing; interviews with composer Michael Holm and actors Udo Kier, Herbert Fux, Gaby Fuchs, Ingeborg Schöner and (audio only) Herbert Lom, who died in 2012 at 95. "Mark of the Devil: Now and Then" looks at the movie's locations, while outtakes and a gallery round out the extras. All of this stuff is great, if a bit overwhelming after such an exhausting viewing experience.

Also included is a reversible sleeve featuring original and newly commissioned artwork by Graham Humphreys; and an excellent, illustrated and full-color booklet featuring essays by Adrian Smith (with a particular focus on the film's censorship troubles in Britain) and Anthony Nield (on Udo Kier), plus an archival interview with Reggie Nalder by David Del Valle.

Interested viewers will want to proceed with caution. Mark of the Devil is fascinating on many levels, though its scenes of torture and execution are certain to turn others off. But the movie looks very good and the extra features are outstanding. For its intended audience, this comes Highly Recommended.