Whenever I think about the Pam Grier-starring string of female empowerment revenge fantasy blaxploitation flicks, I'm reminded of Chris Rock's line about being black in America: "It's like the uncle who paid your way through college, but molested you." The same can be applied to women and blaxploitation. Sure, films like Coffy presented a woman, of color no less, as an action hero taking down armies of pimps, drug dealers and other horribly misogynistic monsters, but they also exploited every female character's sexuality with juvenile abandon. 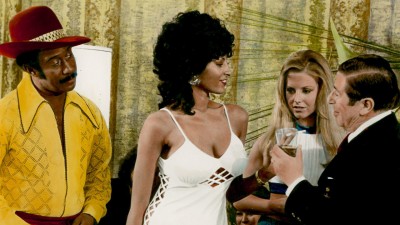 If you see any halfway attractive woman in Coffy, in the supporting cast or even as an extra, you can bet your life that her breasts will be exposed within a minute, regardless of the context of the scene. Grier herself was almost contractually obligated to show her large "assets" in every single scene, and she plays the protagonist so you do the math. No opportunity to show breasts is squandered. The infamous catfight scene is an obvious example, but my favorite is when a pair of robbers inexplicably exposes a passed out victim's breasts before making their getaway. I guess the only way to sneak in the anti-drug and female empowerment messages in these films was to wrap those themes around a Trojan horse of cheap exploitation.

Blaxploitation has a very distinct style and approach. With the wah-wah funk on the soundtrack, the obligatory theme song, the bevy of impressively well-coiffed Afros, the unique slang, the extreme violence and sex for the period, you're either with it, or you look at it as a cheap oddity in American film history. I usually appreciate these films more for their place in our culture than for their actual technical achievements, of which they were sorely lacking. But I guess that's part of the charm. Melvin Van Peebles' groundbreaking Sweet Sweetback's Badass Song is downright unwatchable in pure technical terms, but I understand its important place in African-American cinema.

Taking full advantage of Grier's natural charisma and presence, Coffy is actually a halfway decent revenge fantasy, an entertaining romp when pulled apart from its cultural significance. The plot is the same as eighty-five percent of blaxploitation films: Relative of strung-out junkie goes after the pushers and dealers who destroyed his or her family. In this case, Grier plays a nurse named Coffy, who vows to destroy those who hooked her sister to smack.

What follows is video game logic, way before such video games even existed. After a cold open that shows Coffy's skills as a drug pushing pimp killer, she offs one criminal after the other until she gets to the big boss. Meanwhile, her awkward cover as a prostitute, with the worst Jamaican accent ever put on film, provides the movie with ample opportunity for exposed breasts. These films were all produced on the cheap, by Roger Corman's American International Pictures, and were written, shot, edited in a staggeringly short amount of time. With this in mind, writer/director Jack Hill manages to create as many iconic blaxploitation moments amidst terrible lighting and framing. Yes, this is the movie where the famous line, "It ain't gonna be easy for you, because you better believe it's coming!" comes from.

Grier's presence alone, as well as the assured way she carries herself while delivering ridiculous lines with utmost confidence, is what makes these films the cultural milestones they are. Without her, the whole enterprise crumbles.

It shouldn't be surprising that the 1080p presentation on the disc is riddled with scratches and dirt. But in a way, isn't that what gives these movies their charm? Personally, I think a completely cleaned up blaxploitation film transferred to HD with copious amounts of DNR would look unnatural. Yes, for the ultimate ironically detached experience, you can watch Coffy on VHS, but bear in mind that Blu-ray is the closest we get to the definition and experience of the original films' looks. In that sense, this transfer does an excellent job carrying the look of the source material, warts and all.

We get a DTS-HD 2.0 track that more than likely represents a mono mix. I can't be sure, since the cover or the disc menu doesn't specify, but I doubt that Coffy sported a stereo mix. I'd have preferred a mono track in 1.0, but the tinny dialogue and the funky score has a nice amount of depth and clarity in this transfer. The score and sfx are mixed significantly higher than the dialogue, so get ready to have your finger on the volume button if you're watching late at night. To make matters worse, no subtitles are offered on the disc.

We get nuthin', jack.

If you're a fan of blaxploitation, you know whether or not you're going to buy Coffy anyway. If you're a newcomer to the genre, this is a pretty decent place to start, considering Grier's iconic place in blaxploitation history. At the very least, you'll learn where half of Quentin Tarantino's influences came from.