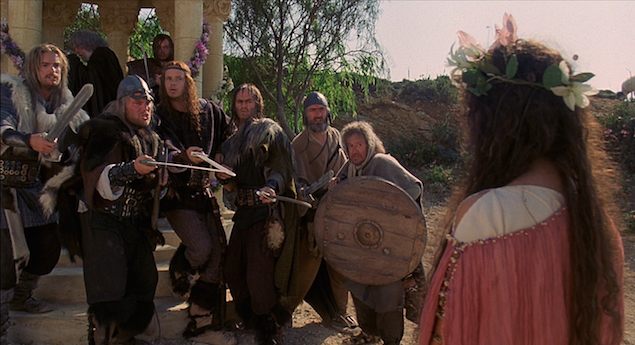 Terry Jones's Erik The Viking has had a tumultuous history since its initial release in 1989. This comic quest film, heavily steeped in Norse mythology and based loosely on a children's book Jones wrote in 1983, clearly derives from the same sense of humor that brought us all those great Monty Python sketches but is nowhere near as anarchic, irreverent, or unrelenting as, say, Jones's co-directorial effort, Monty Python and the Holy Grail. Erik is basically a kiddie adventure flick, albeit one that opens with a failed rape scene and features tons of bloody stabbings. The potentially confusing tone and approach of the film is what presumably led to its box-office failure in the UK.

And ever since it bombed, Jones has been trying to cut the film down in different ways to make it make better sense to audiences. Without the luxury of extra editing time, Jones's first re-cut, for the US release, removed only around four minutes of footage (although moments from those shortened and excised scenes can still be glimpsed in the end credits). Jones cut out another 10 minutes on top of that for the UK home video release, and he seemed pretty satisfied for a decade or so. Then, when the prospect of a DVD release with a new 5.1 audio remix was suggested in the mid-'00s, Jonesy apparently thought, "Hey, let's take another crack at the edit while we're at it," and gave the film to his son Bill (for whom the Erik the Viking storybook was originally written) to shorten it further. Hence, the little-loved 75-minute "Director's Son's Cut," which is the only way this film has been available on Region 1 DVD for the past eight years.

Now, Olive Films is reissuing Erik The Viking and, much to the relief of many annoyed American fans, it is the US theatrical edit we all know and love (this version runs a little over 103 minutes, although the package lists 107, presumably because keeping track of the correct running time is hard with this film). Re-watching this US version, I could see where someone expecting a madcap adventure parody might think the film is a bit slow, but what we have here is not exactly a parody. It's more of a traditional straight adventure tinged with fantasy and a dash of warped comedy, making the steadiness of the pace more suitable to these eyes.

Tim Robbins stars as Erik, a Viking who begins to question the loot-and-pillage lifestyle after accidentally killing an innocent woman (Samantha Bond) during a raid on her village. "Thanks for saving me from a fate worse than death," she comments ironically, as Erik helplessly watches her die. He tries to bring his concerns to his friends and even his grandfather (played by Mickey Rooney, of all people), but no one sees any problem with the cycle of conquest and killing that only seems to create the need for more conquest and killing. Erik turns to a nearby old sage (Eartha Kitt), who reveals that Erik can end the violent Age of Ragnarok if he is able to find the Horn Resounding and blow it to end the millennium-long slumber of the gods.

Erik raises a party in his village to find the horn and venture on to Valhalla, where no living man has gone before. Erik's crew mostly consists of strong macho lunkheads, for whom the only reason to live is to kill in battle and be killed in battle. One of the funny running gags involves one of the crew members, the impressively named Thorfinn Skullsplitter (Richard Ridings), teasing one of the other men, Sven the Berserk (Blackadder's Tim McInnerny), by claiming that Sven's grandfather died (gasp!) of natural causes. Clearly, writer-director Jones is poking fun at this warrior ethos, but he also shows a genuine warmth for the characters that raises them above the level of standard-issue violent dimbulbs.

Other less gung-ho members of the party include the self-explanatory Ivar the Boneless (John Gordon Sinclair, Gregory's Girl) and Snorri the Miserable (Danny Schiller). Charles McKeown, who has popped up in a number of Python solo projects and co-wrote both Brazil and The Adventures of Baron Munchausen, makes an awfully fun appearance as Sven's Dad, there to make certain Sven doesn't screw up and give Berserks a bad name. A Christian missionary (Freddie Jones, the anti-pigeon music enthusiast in Wild at Heart) quixotically attempts to spread the Gospel and maybe convert some souls before they all inevitably die on this adventure. The village blacksmith, Keitel (Gary Cady), who apparently hasn't been made aware of the Marvel Cinematic Universe, is convinced by his scheming apprentice Loki (Antony Sher) to join the expedition and thwart Erik's plan, because a new era of peace would be bad for business. Just to hedge his bets, and to double-cross his boss, Loki also informs nearby warlord Halfdan the Black (an amusingly banal John Cleese) about Erik's plans to end the Age of Ragnarok.

What follows is some typical adventure stuff, including an encounter with a giant sea dragon, a romantic interlude with an exotic beauty (Imogen Stubbs), a sword battle with the bad guys, and the accidental death of hundreds of pacifistic innocents (their daffy ruler is played by Terry Jones himself).

Some have argued that Erik the Viking's special effects looked dated even back in 1989 -- and it's a fair cop -- but it's hard to throw stones at a film so clearly conceived in the spirit of good fun.

Erik the Viking is the kind of film for which you either get on board from the first moment or you don't, which is why all of the Jones family's tinkering over the years seems so counterintuitive. If a viewer locks into Tim Robbins's sweetly naive lead performance and the bleakly funny world that director Terry Jones has brought to life around it, then a few minutes here or there is not going to make or break your overall opinion of the film. I will admit this: compared to some of Jones's other work, Erik the Viking is a little less sharp and inspired. On the other hand, compared to a different Python solo adventure film, Graham Chapman's Yellowbeard (which is also being released by Olive on May 26), this production is the crowd-pleasing Lord of the Rings trilogy. 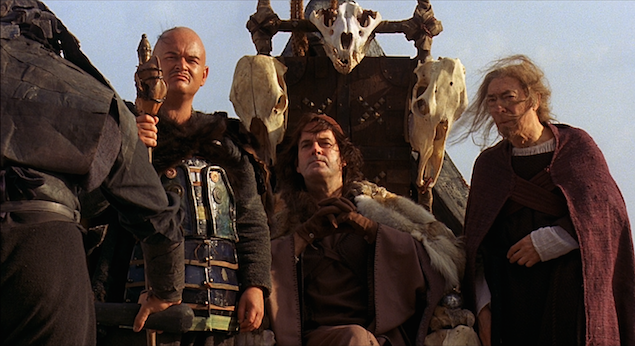 The Video:
Now, getting back to those dated special effects. Their presence in the film makes this AVC-encoded 1080p 1.85:1 presentation more inconsistent than it should be. During the non-FX shots, this transfer boasts excellent fine detail reproduction (you can see the pores on Tim Robbins's face in some close-ups), a tight and pleasing film grain structure, and good color and contrast. But then those opticals and effects shots appear and they stick out like a sore thumb: specks and dirts, chunky film grain, muddier contrast and blurrier detail. They also throw the color timing off somewhat, which is okay when an entire sequence consists of these opticals, but is quite jarring when it cuts back and forth between the two different looks in the same scene. It's a sign of the time in which the film was made, but it's a minor bummer nonetheless.

The Audio:
When that 5.1 remix was created for this film, they only ever bothered to do it for the shortest version, so this cut only comes in stereo. Nonetheless, the DTS-HD MA 2.0 stereo track offered here is a worthy lossless upgrade, offering a nicely layered ambience and a clean, defect-free mix. No subtitles.

Special Features:
Dear Sir,
I wish to complain in the strongest possible terms about the lack of bonuses on this Blu-ray Disc.

Final Thoughts:
Erik the Viking is not a masterpiece, and no amount of re-cutting it will turn it into a masterpiece. It is, however, a pleasantly cracked adventure picture, led by a charmingly goofy Tim Robbins and a crew of hard-working British comic character actors. It's good to have the old 103-minute edit back and looking (for better or worse) as good as it's going to look. Recommended. 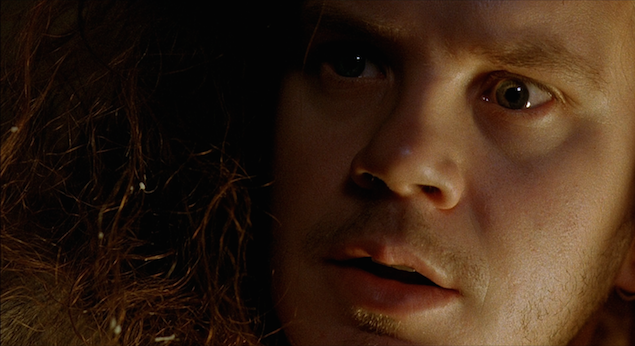