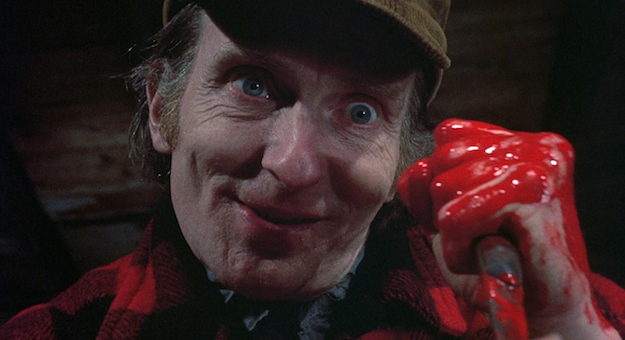 Ed Gein, the Wisconsin handyman turned grave robber and murderer, has inspired numerous American horror films, which helps explain why the 1974 film Deranged -- which attempts to dramatize the Gein case somewhat faithfully -- has a slight feeling of familiarity to it. A history-averse modern viewer can be forgiven for assuming that Deranged rips off elements from Tobe Hooper's near-contemporaneous The Texas Chain Saw Massacre and Alfred Hitchcock's Psycho, because all three films are pulling from the same source. Deranged also resembles both of these films tonally, with a first half notable for its dry, dark humor and a few gooey gross-outs (courtesy of writer/co-director Alan Ormsby and fledgling FX guru Tom Savini), giving way to an unsettling and downright terrifying second half.

Deranged is a surprisingly excellent low-budget horror film that frankly should be more famous. Maybe the film's graphic elements were a bit too much for horror audiences of the time, because Deranged pretty much disappeared from the public eye for decades until it resurfaced on a Midnite Movies double feature DVD with Motel Hell (where I first saw it). If one sets aside the gore (which is admittedly memorable and effective), the film is a smartly structured thriller, highlighted by a complex performance by Roberts Blossom (Escape from Alcatraz).

Blossom appears as the film's Gein stand-in, Ezra Cobb, who starts off the film as an apparently sweet-natured loner who spends most of his free time caring for his dying mother (Cosette Lee). The first clue that this family might not have all of their marbles intact comes during Ma Cobb's death scene, in which she reminds her son that women are all essentially wicked and untrustworthy. She also bellows to Ezra what might have been the film's catchphrase, if it had been more popular: "The wages of sin is gonorrhea, syphilis, and death!" Ezra is so distraught over his mother's death, that he begins imagining that she talks to him from beyond the grave. The scene in which Ezra, as his mother, convinces her son to go dig up her corpse illustrates the deft grasp of tone that directors Jeff Gillen and Alan Ormsby possess, allowing the revelation that Ezra is talking out loud to himself -- playing both parts, as it were -- to come at the end of the scene, in a strange punchline that is funny and chilling at once.

Ezra goes and digs up his mother's corpse, but is horrified to learn that he waited a bit too long, and she is falling apart. He dutifully researches taxidermy and determines that he needs material from a fresher corpse to stitch his mama together properly, so he starts robbing other graves. A scene in which he removes the brain and eyeballs from one of his already-dead victims before getting the skin and hair components he needs for his patchwork was originally excised from the film to secure an R rating, but it has been re-inserted into the film for this new Blu-ray.

The film implies but does not show Ezra's further grave-robbing and dismemberment shenanigans by utilizing a supposed news reporter as narrator, played with utter seriousness by Leslie Carlson, to touch on the key points of Ezra's story. The narrator is often seen onscreen, walking into scenes and interjecting himself into the reality of the film like a Monty Python character. The narrator is both an effective storytelling device and a subtle ironic commentary on the sensationalism of the story. As the film progresses, and Ezra's character spirals deeper into his madness, going so far as to start committing murders, this narrator smartly recedes from view.

In real life, Ed Gein confessed to committing two murders before he was caught, and the second half of the film does a startling job of imagining the experience of being his victims. Micki Moore and Pat Orr play the two unfortunate women who catch Ezra's eye once he decides to forgo his mama's advice and find himself a wife. Of course, when Ezra decides to introduce a potential fiancee to his mother, all bets are off.

According to the bonus features on the Deranged Blu-ray, many of the actors involved came to regret or despise the film after its release (producer-editor Bob Clark [Black Christmas] didn't even want his name on this film). That seems a terrible shame, because it's not an unnecessarily cruel or torture porn-y film (although I'm sure some of the filming process was traumatic for cast and crew alike). Maybe it could be viewed as poor taste that certain horrifying moments are played for laughs, but in a post-Herschell Gordon Lewis, post-Troma world, that should be moot. There's a lot of good work on display in Deranged, and I think it should be counted in the upper echelons of the horror canon, along with all those other gems that turned this horrifying chapter in American history into unforgettable cinematic nightmares. 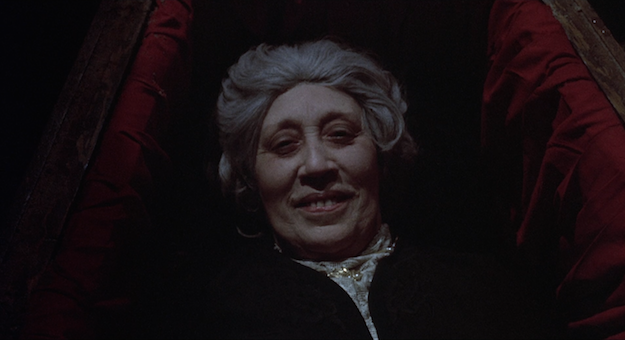 The Video:
There's already a lot of debate online about Koch Lorber's mastering of this AVC-encoded 1080p 1.85:1 image, which appears to have started from the same master as last year's UK Blu-ray release from Arrow. However, this Koch Lorber version is notably brighter and does not reproduce the film grain structure as consistently (due to a generally lower bitrate). DVD Beaver has a few comparison frames. Call me a luddite, but I don't have a region-free player, so I can't personally do a comparison. Judged on its own merits, I would say this Koch Lorber rendering is still surprisingly clean and clear, with only a few isolated incidents of film damage. Skin-tones are a little variable, but much of this issue seems present in the original cinematography. If, like me, you are stuck in Region A, this remains a strong visual presentation.

The Audio:
The DTS-HD MA 2.0 audio is on the quiet side, so I had to turn my volume knob up farther than I expected, but once I did, the soundtrack sounded good, with clear and undistorted dialogue, an evocative musical score by Carl Zittrer, and some spine-tingling screams. Oh those screams! No subtitles.

- The first is an entertaining chat with writer and co-director Alan Ormsby, who discusses the production process and especially the difficulties of getting cooperation to make a film with such an extreme subject. The second commentary is by historian Richard Harland Smith, who very thoroughly discusses the careers of all the actors involved, as well as the details of the actual Ed Gein case and the way it has been dramatized over the years. This commentary is much more formal than the director's track, but it has some humorous, macabre asides.

Final Thoughts:
Deranged is a cult classic that deserves a massively larger cult. Its performances are surprisingly vivid and realistic, its script is smart and subtly funny, its gore is stomach-churning, and its suspense scenes are genuinely nerve-jangling. This Blu-ray is a wonderful step-up from the old DVD, and while folks in the know might grumble that the PQ is not as 100% excellent as the recent UK edition, even folks with the UK edition will want to check out the exclusive director's commentary provided here. Highly Recommended. 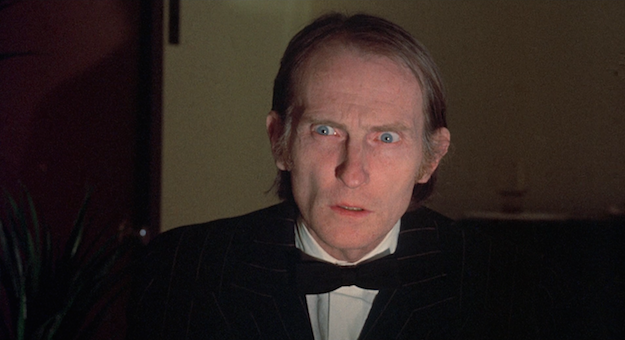