Arrow Features // Unrated // August 18, 2015 // Region 0
List Price: $39.95 [Buy now and save at Amazon]
Review by Stuart Galbraith IV | posted August 24, 2015 | E-mail the Author
I braced myself for director Marco Ferreri's La Grande Bouffe (1973), a very controversial French-Italian co-production I wasn't expecting to like. The story of four upper-class men who decide to eat themselves to death divided critics. According to the Blu-ray's excellent liner notes, at the Cannes Film Festival judge Ingrid Bergman reportedly vomited after the screening, while actress Catherine Deneuve, star Marcello Mastroianni's lover at the time, was so appalled that she didn't speak to him for a week afterward. Other festivalgoers spat at the director in disgust.

Even those who admire its premise tend to regard Le Grande Bouffe as overlong, and that its scatological and sexual aspects go too far and go on for too long, but in the end I found the picture totally fascinating, if unclassifiable, and perfectly paced. It's usually regarded as a black comedy-parable about the insatiable but empty privileged class, which may be partly correct, but that doesn't begin to fully describe this genre-defying film. Arrow Films seems to have been attracted to the property partly for its gross-out aspects. Johnny Mains's illuminating essay points to later films like Peter Greenaway's The Cook, the Thief, His Wife, and Her Lover and the notorious Mr. Creosote's sequence from Monty Python's Meaning of Life as approaching La Grande Bouffe's sensibilities, while bemoaning that some will seek it out only for its extremism.

The film certainly has its share of outrageous and deeply disturbing moments: when, for instance, the plumbing gives out after being inundated with a year's worth of feces and explodes all over one character; or when one character finally expires in a relentless expulsion of noxious fumes and drippy diarrhea. But what impressed me most about La Grande Bouffe was, oddly enough, its restraint. God save us from a Hollywood remake.

Outrageous things happen and well before the halfway point the situation has descended into utter depravity, The Hellfire Club - Italian Style, to paraphrase another of Mains's observations. And yet the movie is always grounded in a kind of personal verisimilitude that truthfully captures its four characters' (mostly empty) relationship with food, sex, and death (underscored by the fact that the five main characters share the same first names as the actors playing them). In this regard the movie could almost be likened to director Henry Jaglom's very different but similarly frank films about such topics, notably Eating.

Arrow's Blu-ray & DVD combo set offers a new 2K restoration from the original camera negative that's essentially perfect, plus both the Blu-ray and DVD are crammed with scads of extra features. 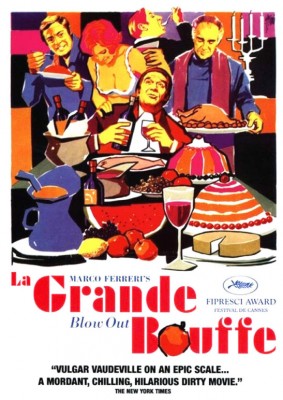 The four men are introduced without any explanation of their plans, how they know one another, or much in the way of backstory. They are Ugo (Ugo Tognazzi, La Cage aux folles), a depressed gourmet chef embroiled in a messy divorce; Michel (Michel Piccoli, The Young Girls of Rochefort), an effeminate television host; Marcello (Marcello Mastroianni, 8 1/2), a sex-addicted airline pilot; and Philippe (Philippe Noiret, Cinema Paradiso), a wealthy judge who lives with his one-time nursemaid.

The four converge on a gorgeous if long-unoccupied villa belonging to Philippe's late father. Truckloads of food arrive from various butchers and grocers, and under Ugo's direction they prepare enormous and endless banquets of mostly French cuisine. (Amusingly, Mains provides the complete menu in the accompanying booklet. Dishes include wild boar, suckling pig, Salt Marsh Lamb from Mont Saint-Michel, Kidneys Bordelaise, Crêpes Suzette, turkey fed with cognac, stuffed with puréed apples and chestnuts, etc.) All this food looks delectable at first; but like the characters' reactions as the story progresses, even the most exquisite dishes subtly become almost grotesquely inedible monstrosities.

Marcello, unable to gorge himself to the grave without simultaneously satisfying himself sexually between the huge meals, orders a trio of prostitutes. Meanwhile, a chance encounter with children from the elementary school nearby leads to a dinner invitation for Rubenesque teacher Andréa (Andréa Ferréol). Philippe is, initially, appalled at the inappropriateness of inviting such a prim and proper schoolmarm, but it soon becomes clear she's made of sterner stuff than the hardened hookers.

Another of La Grande Bouffe's attributes is that so much of the film's narrative goes unexplained, leaving it to the audience to try and fill in the blanks. Over time it becomes somewhat clear that, for instance, Philippe is the terminal result of strict parental expectations about the direction of his life, but they're both dead now and he finds only emptiness. Marcello bangs every woman he can get his mitts on yet is never once fulfilled. Ugo makes culinary masterpieces others ravenously consume but can't appreciate or even begin to understand (or perhaps the reverse; Mains suggests Ugo can't enjoy his own creations); Michel, presumably bisexual, feels his TV job is at a creative dead end and has unexpressed feelings for Marcello.

As Mains points out, Andréa becomes a Siren of Death enabler of the men's fatal gluttony. To everyone's surprise, and certainly the audience's, after initially hinting at a sweetly innocent romance between her and Philippe, she eventually sleeps with all the men, for a long time sadistically holding out on Marcello, the Great Lover, and though not a female Iago in this story, by turns passively and actively seems to go along with their death wishes.

The picture seems to at least partly be a critique of insatiable consumerism. Writing this, I couldn't help but think of the same-day news story about the man with the $300,000 DVD collection he'll never watch. (He admits to seeing only 200 of the films in this monument.) La Grande Bouffe ends with a truckload of meat dumped in the villa's garden, meat never to be consumed. All that's missing is a dissolve to the garden months later, with it all decomposed and reabsorbed back into the soil.

Le Grande Bouffe is basically unclassifiable and, as the cliché goes, hard to digest. It's also unimaginable something even remotely approaching a film this searingly honest being made in America, especially headlined by four name actors. (Mains points to Mike Figgis's Leaving Las Vegas as similar though "not in the same league," an accurate assessment.) The four leads all give remarkable performances, particularly Piccoli, who did nearly a half-dozen films with Ferreri.

Andréa Ferréol, making her starring debut, is also exceptional. For a movie primarily concerned with men I wonder if women able to move beyond the picture's scatological crescendos would see that Andréa is one of cinema's most liberated women, as unexpectedly so as Meiko Kaji's Sasori in Toei's "Female Convict Scorpion" film series.

Presented in its original 1.66 widescreen La Grande Bouffe looks great. Arrow supervised the film's extensive 2K restoration, which has rich color, noteworthy sharpness and basically looks perfect. Just as the original camera negative was sourced, Arrow turned to the film's original magnetic mono soundtrack, which is just as pristine in its uncompressed PCM form here. The disc is region A-B coded, and a standard-def DVD copy is included.

The bountiful supplements include a reversal cover; The Farcical Movie: Marco Ferreri, a television interview with the director; behind-the-scenes footage; Colours Around a Festival, an amusingly combative press conference featuring the director and cast; Forming Ferreri, a new video essay by Italian film scholar Pasquale Iannone about the director's early career; a scene-select audio commentary by Iannone; and the aforementioned booklet essay which also includes quotes from myriad contemporary reviews.