The Criterion Collection // PG // August 18, 2015
List Price: $39.95 [Buy now and save at Amazon]
Review by Stuart Galbraith IV | posted August 28, 2015 | E-mail the Author
François Truffaut's Day for Night (La Nuit américaine*, 1973), an ensemble drama about the making of a French movie at the Victorine Studios in Nice**, is the kind of foreign language film so entertaining and accessible that even Americans who strenuously avoid subtitled movies are sure to embrace it.

Funny, touching, impressively unpredictable, and endlessly fascinating on many levels, the picture was Truffaut's first big success in a decade, though it prompted a venomous letter from longtime former ally Jean-Luc Godard, who accused Truffaut of making a "lie" and selling out. (Truffaut replied in kind and their close friendship ended then and there.) Day for Night is hardly either of those things. It's not a documentary or a treatise on the decline of the French New Wave, but rather a celebration of the filmmaking process, its unique pressures, and the short-term but passionate bonding that intensive, five-week shooting schedules foster.

Criterion's new Blu-ray is excellent, offering a perfect transfer of the film and an enormous amount of supplementary material, some of it almost laughably pretentious for such an emphatically unpretentious movie, though this is compensated by some other really superb extras. 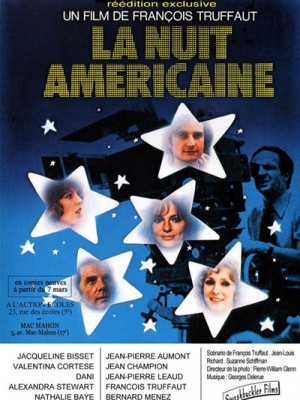 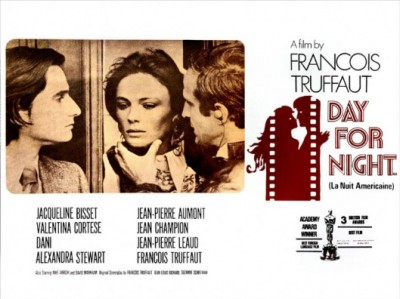 It's a troubled production from the get-go. Julie is recovering from a recent nervous breakdown during which she walked off her last film and thus is uninsurable. Séverine's son is dying of leukemia (according to the gossipy crew) and that, combined with industry ageism, has her taking to the bottle and painfully blowing takes. Meanwhile, insufferably possessive Alphonse has had girlfriend Liliane (Dani) hired onto the show as an intern but convinced she'll have an affair the moment he takes his eyes off of her. A shapely actress (Alexandra Stewart) playing a secretary in the movie refuses to appear in a bathing suit because she's hiding the fact that she's three-months' pregnant. The developing lab ruins an expensive day's work involving dozens of extras, necessitating costly retakes. And on and on.

Day for Night doesn't aim to be entirely realistic about the way movies are made, but it's still a remarkably accurate portrait of chaotic European co-production methods c. 1972. (Some day an enterprising filmmaker ought to dramatize life on the set of a Harry Alan Towers production, especially Call of the Wild.) Of course, this was long before the days of Special Feature DVDs and Entertainment Tonight, when "civilians" (or as someone in the film calls them, "outsiders") had no idea at all how movies are made. Especially back then but even now Day for Night endlessly fascinates by revealing some of the trickery that goes on in the making of an ordinary movie. A tiny light is hidden in a candle prop to emit camera-readable light on the actors' faces. A tall scaffold is erected upon which a small set is built to suggest an entire building that isn't there. And almost the entire film is shot at a studio where several blocks of a Parisian street are little more than false fronts and a subway entrance leading nowhere.

The movie is full of real-life references. Ferrand receives a package of cinema books, which Truffaut apparently always did for real when he was working. Alexandre and Séverine recall the old days working in Hollywood, careers both Aumont and Cortese had back in the ‘40s and ‘50s. Bisset plays a French-speaking foreigner with a Hollywood star parent, possibly a reference to Jane Fonda, who of course made French films with then-husband Roger Vadim a few years earlier, and who like Julie Christie on Truffaut's Fahrenheit 451 struggled with depression. A last act tragedy similarly recalls the death of Françoise Dorléac, star of Truffaut's The Soft Skin. In an amusing little scene, Ferrand listens to a piece of music written newly-composed by Day for Night's real composer, Georges Delerue, never seen but heard over a telephone line.

But Day for Night is primarily concerned with the gypsy-like existence of movie people, how the intensity of the work binds people together on a very intimate level, only to disband them after a month or two when everyone moves on to their next job. And, in doing so, Day for Night asks a fairly obvious question with an equally obvious answer: Do people who make movies deny themselves ordinary living? Well, yes, they do in some respects but also arguably live life more intensely than 9-to-5ers with ordinary careers. In a funny, illustrative scene, Bernard (Bernard Menez), a prop man, and Joëlle (Nathalie Baye), a script girl, flirt with one another when the latter gets a flat tire on the way to a location where a crucial stunt scene is to be shot. He sheepishly propositions her for a "quickie" but isn't prepared by her forthright acceptance of his offer. Nevertheless, into the woods they scurry. In other words, they're attracted to one another but there's also no time to be frittered away on a protracted courtship.

As Ferrand tells the self-involved, insufferable Alphonse, movie people aren't like ordinary folk; in another scene, Joëlle puts it better and more directly than Ferrand does: "I'd leave a man for a film but I'd never leave a film for a man." Everyone is worried the pressures of filmmaking will break the fragile Julie but what they wrongly assumes is another mental breakdown in the film's last act is a really the grandest of selfless gestures to keep the production from unraveling.

Ferrand, like Truffaut and not like Truffaut, functions as much as a traffic cop as an auteur. In an early scene he fields endless questions covering myriad topics big and small from his crew: discussing budget cuts with his producer, choosing a pistol for Meet Pamela's climax offered by his property master. A fragmented dream sequence, not in the original screenplay, perfectly encapsulates Ferrand/Truffaut's love of cinema.

Presented in its original 1.66 widescreen and supervised by cinematographer Pierre-William Glenn, Day for Night looks great and even includes its original Warner Communications logo at the head. The new digital 2K transfer sources a 35mm interpositive while the uncompressed mono soundtrack (French only with English subtitles) utilizes the 35mm magnetic track. Except for a few grainy opticals probably grainy in its original theatrical run away, this Day for Night looks exceptionally good. The disc is region A encoded.

Bountiful supplements appear derived from a variety of sources, some from prior DVD releases, others new to the Blu-ray disc. A new visual essay by :: kogonada is observant but over-the-top with its pretentiousness (as pretentious as that oddball name), all but beating the viewer to death with stylization while discussing a movie notable for its effortless and lack of pretension.

However, a new conversation with film scholar Dudley Andrew focusing on the rift between Truffaut and Godard in the wake of Day for Night is splendid: hilarious, thought provoking, and more than a little sad.

Then there's more moderately annoying stuff with "Day for Night: An Appreciation, with Annette Insdorf. As with :: kogonada's visual essay, Insdorf has interesting and insightful things to say but her tone has the slightly-grating style of a film professor trying to keep her undergraduate film students awake with overemphatic enthusiasm.

Except for a new video interview with cinematographer Glenn, a fat section of Interviews alternates mostly between archival material from 1973 and a 2003 DVD version. The other interviewees are Truffaut, Bisset, Aumont, Baye, Menez, Dani, editor Yann Dedet, and assistant editor Martine Barraque.

Rounding out the package is an English-language trailer and a leaflet essay by David Cairns.

Eminently accessible and often quite magical, Day for Night gets a presentation and extras worthy of the film. A major Blu-ray release, this is a DVD Talk Collectors Series title.

* "La Nuit américaine" is the French term ("American night") for "day for night," the cinematographic process of filming nighttime scenes in movies during the daytime through the use of filters and laboratory tweaking.

** In the book My Lunches with Orson, Welles bemoans the idea of filming a proposed film there, complaining that an adjacent airport makes shooting movies with live sound there next to impossible. And indeed, in Day for Night huge, noisy jet aircraft frequently pollute the skies in many shots.