Kino // Unrated // August 11, 2015
List Price: $29.95 [Buy now and save at Amazon]
Review by Stuart Galbraith IV | posted August 21, 2015 | E-mail the Author
The Front Page (1931) is the first of four film versions of Ben Hecht and Charles MacArthur's famous 1928 Broadway play, set in the pressroom of a Criminal Courts Building hours before the scheduled execution of Earl Williams, an alleged Communist revolutionary convicted of murdering a black policeman. The Front Page was an influential hit on the stage. The great George S. Kaufman directed that version, which starred Osgood Perkins as manipulative editor Walter Burns and Lee Tracy as his ace reporter, Hildy Johnson. It was revived three more times on Broadway, most intriguingly with Robert Ryan and Bert Convy as Burns and Johnson.

Adolphe Menjou and Pat O'Brien starred as Burns and Johnson in the lauded 1931 film, but that was eclipsed by Howard Hawks's famous 1940 remake, His Girl Friday (1940), which recast Johnson as a woman (Rosalind Russell) and Burns's (Cary Grant) ex-husband. Years later Billy Wilder remade The Front Page (1974) with Walter Matthau and Jack Lemmon as Burns and Johnson. Though not one of Wilder's best, financially it was one of his few later-career successes. Switching Channels (1988), attempted to update The Front Page/His Girl Friday to the television age, a promising idea, but the results were disappointing.

The original version of The Front Page is, apparently, in the public domain. When I first saw it 30-odd years ago, it was on VHS, in a transfer so pitiful it made for a frustrating viewing experience. Now comes Kino's Blu-ray release of The Front Page which utilizes a good 35mm print held by the Library of Congress, a print acquired, oddly enough, from East Germany back in the early 1970s. For the most part it looks very good throughout, though the sound level fluctuates quite a bit. A couple of good extras round out this attractive package. 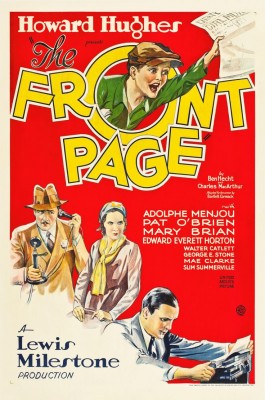 In the wee hours of the morning, newspaper reporters Bensinger (Edward Everett Horton), McCue (Frank McHugh), Endicott (Eugene Strong), and others pass the time playing poker while awaiting the hanging of Williams (George E. Stone). Not present is Hildy Johnson (Pat O'Brien), star reporter for the Examiner, who to everyone's surprise announces when he finally turns up that he's quitting the paper, getting married, and moving to New York to work a normal, steady job at his father-in-law-to-be's advertising agency.

However, Johnson's ruthlessly devious boss, editor Walter Burns (Adolphe Menjou), is determined to keep Johnson at the paper at all costs. First he threatens to have Johnson arrested for a minor crime Burns actually committed (triggering a false alarm at a nearby movie theater) and then arranges to leave Johnson broke and unable to leave town. Eventually though, the newsprint ink running through Johnson's veins gets the better of him when Williams, claiming to be innocent, stages a spectacular impromptu escape from custody and decides to hide out with Johnson and a sympathetic witness who testified on the convicted man's behalf, prostitute Mollie Malloy (Mae Clarke).

Of the three mostly-faithful versions, His Girl Friday is the best regarded and perhaps the funniest. The original version is still fine with a harder, pre-Code edge lacking in the 1940 film, though the Johnson-Burns relationship is much richer in Hawks's film. Billy Wilder's 1974 remake is usually dismissed but it's actually better than either of the two earlier films in some respects and, overall, is more much entertaining than the 1931 film. That's because Wilder's film has a much superior cast with better leads and, for the most part, supporting actors (Austin Pendleton, David Wayne, Charles Durning, Cliff Osmond, etc.), plus Wilder has a better ear for the dialogue and directs his cast accordingly. The material is atypical Wilder, but his exacting direction exudes his touch with a richness and rhythmic pacing the 1931 film lacks.

Instead, as he had done so wonderfully well the year before for All Quiet on the Western Front, director Lewis Milestone's primarily brings to The Front Page an aggressively cinematic style. Though adapted from a play with but a single set (the press room), with screenwriters Bartlett Cormack and Charles Lederer director Milestone not only open up the material with a few exterior scenes and little bits set elsewhere, Milestone and cinematographer Glen MacWilliams throw everything but the kitchen sink at the audience to distract them from the play's static nature.

For starters, the film is edited at a breathless pace, favoring short cuts and tight medium- and close-ups in the pressroom. Unusual for the period, the camera often dollies about the room, from one actor to the next, and in the picture's most audacious visual trick, a bit too audacious for its own good, the camera actually "bounces" up-and-down, cutting among the actors, as Sheriff "Pinky" Hartman (Clarence Wilson) is being teased.

Visually, then, like All Quiet on the Western Front, The Front Page is way ahead of nearly all early talkies. But Milestone expends all his energies there, while the casts of characters seem to be receiving much less attention. In the leading roles, O'Brien and Menjou are just okay. Menjou projects an oily charm, a variation of his usual screen persona, but O'Brien is pretty colorless. A reporter's drive, expressed so well by Gene Evans in Samuel Fuller's Park Row (1952), to cite but one example, is completely absent in O'Brien's playing, though that milieu is expressed well elsewhere in the picture.

And except for Edward Everett Horton's memorably germ-phobic Bensinger, the reporters are fairly one-note and not-quite interchangeable. Of the rest of the cast, only Clarence Wilson, with that great, Dickensian face and manner, and Mae Clarke, who injects some much-needed humanity into the cynical material, are at all memorable.

On the plus side, this Front Page is an extremely interesting example of the more permissive, pre-Code Hollywood era. In this version, the law is hopelessly corrupt, conspiring to suppress innocent Williams's reprieve until after the hanging. Made at the height of Prohibition, there's casual drinking and gambling among the reporters, and open references to prostitution, whorehouses, and other vices. One character gives another "the finger" and there are double-entendres aplenty. One example: After Williams escapes, one reporter receives a phone call from a woman claiming the fugitive is hiding under her piazza. "Tell her to stand up!" says another.

Presented in its original 1.37:1 standard format and in black-and-white The Front Page looks fine generally. More noticeable is the mono soundtrack, which is very clear some of the time but elsewhere the dialogue almost becomes inaudible. Partly this can be attributed to the technically primitive manner in which the audio was originally recorded, but some of the sound drop-outs seem the fault of the print.

Supplements include an audio commentary by film historian Bret Wood; two radio versions from 1937 (starring columnist Walter Winchell) and 1946 (with Menjou and O'Brien); and a short documentary about the film preservation efforts of the Library of Congress.

Historically interesting and definitely worth seeing if not quite the classic its reputation suggests, The Front Page is Recommended.