It's been a couple of days since I've seen The Harvest and I still can't get it out of my head. In a time when even the most revered horror flicks leave my mind mere minutes after they're over, why does such an understated example of the genre, one that doesn't use any gore, a flashy visual style, or tired gimmicks, stick with me for so long, haunting my thoughts the way no other contemporary horror film has done in the last couple of years? I think the answer lies in the fact that the "monsters" of The Harvest are not supernatural creatures or unrealistically cunning or charismatic serial killers out to destroy you simply because they're evil. 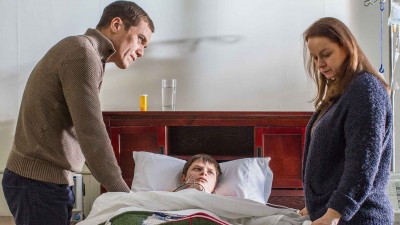 No, the monsters this time around are perfectly normal looking parents pushed to do something terrible out of desperation. Yes, what they do is horrendous and despicable, but as a parent I have to admit that I fully relate to their pain and, if the shoe was on the other foot, I have to begrudgingly confess that what they do in this excellently executed and tension-filled example of realistic horror would have crossed my mind at least once. And that, more than anything else, turns The Harvest into a truly terrifying experience.

The Harvest signifies director John McNaughton's return to feature filmmaking after a thirteen-year absence, and almost a ten-year absence from the genre after his Masters of Horror episode from 2006. Many critics compare The Harvest to McNaughton's 1986 ultra-realistic horror masterpiece Henry: Portrait of a Serial Killer, since both films efficiently use a grounded narrative and visual approach while emphasizing psychological horror instead of gore and flashy visuals. That might be the case on a superficial level, but if we dig deeper into The Harvest's tone and themes, it's closer to Georges Franju's macabre masterpiece Eyes Without a Face.

As tragic as Doctor Genessier's relationship to his deformed daughter was in Eyes Without a Face, it's hard not to admit that his motivations behind his horrible acts were driven more by vanity than a life-or-death situation. McNaughton and screenwriter Stephen Lancellotti up the ante by creating parents driven to madness out of a more relatable kind of desperation. Draconian Doctor Catherine (Samantha Morton) and kind stay-at-home dad Richard (Michael Shannon) have to move along with their terrible plan if they want to stop their son Andy (Charlie Tahan) from succumbing to a deadly disease.

In order to keep their activities a secret, Catherine and Richard home school the frail and sickly Andy and keep him away from his peers. Their plans hit a snag when a new addition to the small town, an extroverted recently orphaned teenager named Maryann (Natasha Calis) hits it off with Andy as the two gradually become best friends. Maryann seems to be a positive influence in Andy's lonely and melancholic existence, but for some reason Catherine does whatever she can to make sure the two never see each other again. As Maryann investigates the reasons behind Catherine's overzealous objection to her friendship with Andy, she begins to uncover horrifying secrets about the family.

I've only really covered the first act or so of The Harvest with this brief synopsis, and I think you should experience the story's genuinely surprising twists and turns firsthand. To be honest, I've probably already given away too much just by referencing Eyes Without a Face. All I can say is that once the s--t hits the fan and the family's secrets are exposed, McNaughton shows great restraint as he blocks the tone from turning into ham-fisted camp, and successfully guides the third act to relatable tragedy, helped tremendously by soulful performances from Morton and Shannon. The final scene turns into a heartbreaking homage to the infamous ending of The Bride of Frankenstein.

Unfortunately, some bad decisions keep The Harvest from being truly great. Once Maryann finds out the truth behind Catherine and Richard's suspicious behavior, he tells her grandfather (Peter Fonda), who dismisses the shocking and surprisingly detailed information as Maryann acting out because she's not allowed to play with Andy anymore. This plot hole is one of the most egregious uses of the "Authorities don't believe the protagonist so the story can reach the third act" cliché, and almost derails the film's credibility as it reaches its finale. An atonal epilogue doesn't help matters either. That being said, these issues don't stop The Harvest from ending up as a wholly satisfying experience. 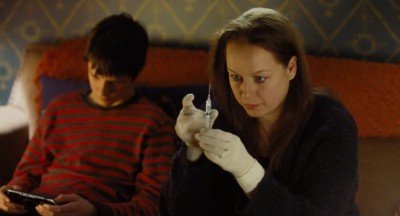 Like Henry, The Harvest has a very flat yet realistic look that gets away from overtly stylistic touches in favor of capturing a more relatable real-life horror. The film's digital cinematography is loyally transferred in this 1080p presentation. The colors pop, the occasional use of contrast is represented beautifully, and this is a solid video presentation overall.

We get two choices, both in DTS-HD. The 7.1 mix is very efficient, although a bit of an overkill for such a subtly mixed film. However, when the intense score kicks in, the surround mix lets its presence known. The 2.0 mix emphasizes the score on TV speakers and should be the choice for watching The Harvest on TV.

Commentary by John McNaughton and Producer Steven A. Jones: This isn't a very exciting commentary as McNaughton and Jones occasionally chime in with some interesting information about the film's production. There's some dead air here for sure, but fans of the film should find a lot to learn from this commentary. McNaughton's occasional dry sense of humor is also very much appreciated.

Just like grandpa George Miller taught hot shot young blockbuster filmmakers a lesson on how to most efficiently pull off a modern action flick with the excellent Mad Max: Fury Road, slightly younger grandpa John McNaughton shows young horror wannabe auteurs how to tightly construct a truly terrifying example of the genre using a single location, a handful of characters and none of the flashy visuals contemporary filmmakers of the genre too often rely on as a crutch to cover up a lack of interesting characters and effective storytelling. Even with its minor issues, The Harvest is highly recommended to every horror fan.