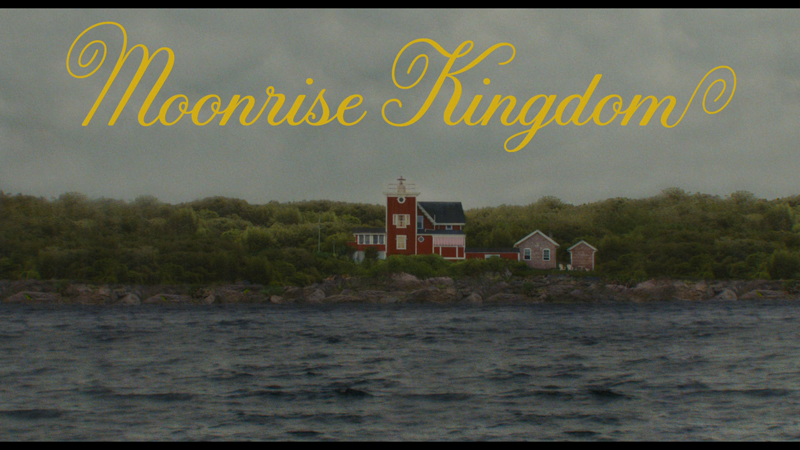 
The Movie
Wes Anderson, the Criterion Collection's spirit animal, returns with a full-fledged release of his 2012 paean to young, misunderstood love, Moonrise Kingdom, which, like all of Anderson's work, had its original, mostly bare-bones mainstream home-video release, before it could get a proper treatment from Criterion. Now that the film is back in the spotlight, viewers can truly appreciate the beauty of the story of Sam and Suzy, two young lovers facing a world that doesn't understand them. While some could look at this film and its very Anderson look and feel, and accuse the filmmaker of going back to the well yet again, the film offers an entirely new experience--one of the best, most entrancing, most complete he's put on film.

Right off the bat, Moonrise Kingdom is undoubtedly an Anderson film, with that precision look, as if he filmed a doll's house--an era-specific aesthetic that's complemented by quirky characters like Bob Balaban's green-capped narrator, who is essential in pulling the audience into the movie and establishing a sense of tension. Once the scene is set in 1965 New England, with an ominous storm on the horizon, we meet our cast of characters, including an outcast Khaki Scout named Sam (Jared Gilman) and an unusual young girl named Suzy (Kara Hayward). Drawn to each other following a chance meeting, they seek to escape their scout troop and family, respectively, and take off to live together in the wilderness, which creates trouble for those around them, including Sam's scout master Ward (Edward Norton); Suzy's parents (Bill Murray and Frances McDormand) and the local constable, Captain Sharp (Bruce Willis). 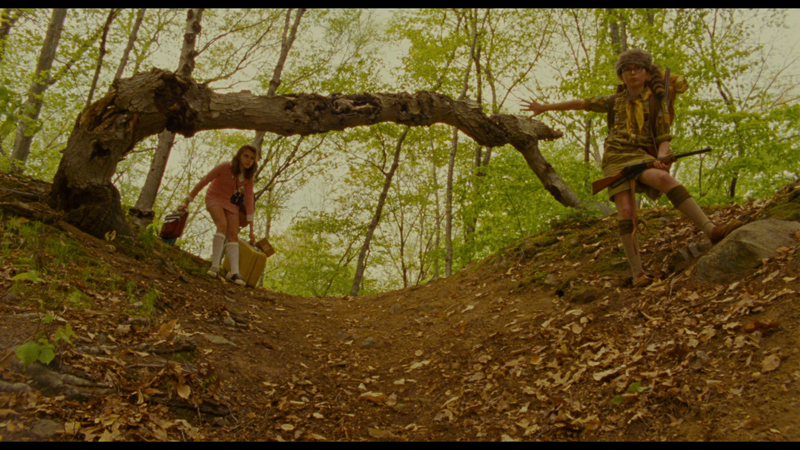 For all of the the artifice and cleverness that at times makes the movie feel like a wondrously photographed stage play, there's no denying how real the emotion feels, whether you're watching Sam and Suzy make their way into a new world or a lonely police officer facing life on his own. Told in stages, the story builds upon itself, with the film's initial prophecy never far from mind. The results are akin to an avalanche, and once things get rolling, there's no stopping, as nature simply takes over, literally and figuratively. Naturally though, the talented cast, which also features interesting appearances by Tilda Swinton, Jason Schwartzman and Harvey Keitel, is key to it all coming together in chaotic harmony. As strong as Hayward and Gilman are in the leads, the movie relies on the specific energy brought by their castmates, including a terrific gaggle of individualistic kids playing Norton's scout charge, to strike the right balance between comedy and drama.

As great as the performances are, the true brilliance of Moonrise Kingdom is in how it's built, with an artistry that's palpable in every scene, informing the visuals, the sound and the techniques used, like maps done in stop-motion animation and Anderson's ever-present examples of correspondence. While the story of Sam and Suzy, a star-crossed pair battling both man and nature, is highly entertaining, in large part due to the outstanding young performers' captivating performances (particularly Hayward's intense stares and Gilman's impressive vulnerability), the way scenes are shot and cut together, like the alternating rhythm of the letters that plan the kids' rendezvous, takes the film to an entirely new level for Anderson. He may not stray far from the trademark style. but he's far more than the "twee" label he's been slapped with. 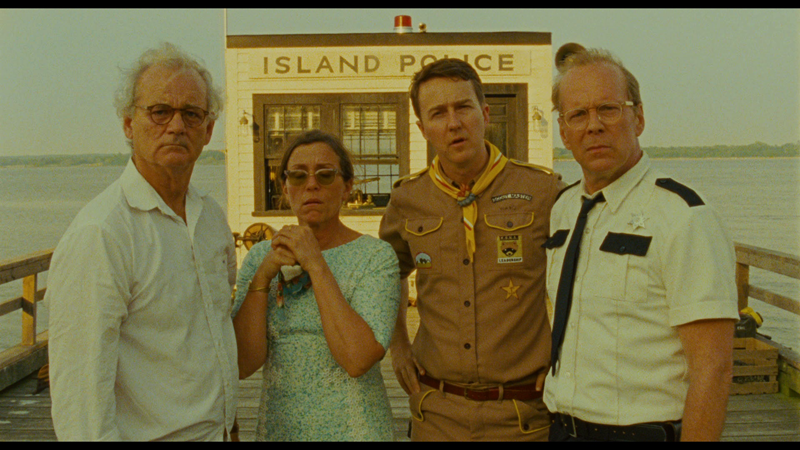 The Disc
Criterion has delivered some impressive releases in the past, but this package is both gorgeous and incredibly appropriate for the film. The Blu-ray disc (which features Khaki Scout badge art) is held in a digipack folder with portraits of the cast on the outside and a pocket on the inside (see the Extras), which is held in an understated matte slipcover featuring a photo of the film's key setting. Rather than mar the art, the label is on a sticker attached to the shrinkwrap, while the sales sheet is glued temporarily to the back of the case. The simple, always beautiful Criterion menu gives the choice to watch the film, navigate the timeline, select scenes and check out the special features. There are no audio options, while subtitles are available in English.

The Quality
Moonrise Kingdom was shot in 16mm and, per Criterion, this 1.85:1 disc was struck from a new 2K digital transfer created from the original negative, under the director's supervision. When dealing in the work of an artist like Anderson, getting it right is key, and the visuals here--amber-hued and highly detailed--come across beautifully, letting your eyes explore the differences between sets and miniatures and the production details in the film's meticulous design work. Color is appropriate throughout, while the level of fine detail is excellent, and black levels support the darker scenes well. Digital distractions are not present, and the film grain is not distracting.

The 5.1 DTS-HD Master Audio track might be the most striking thing about this film, as the masterful mixing of diegetic and nondiegetic music creates a powerful feel in a film where momentum builds and builds. The opening scene alone, with its quirky Benjamin Britten score, which moves from an old-fashioned recorded source to a boisterous live one, is enough to show you immediately that this movie is going to be something different, and it never lets down from that promise, with a soundfield that envelopes you by blending well-placed atmospherics and surround cues with gorgeous songs from an all-star musical team featuring Mark Mothersbaugh and Alexandre Desplat. The feel of the sound and the music are a big part of the experience of Moonrise Kingdom.

The Extras
The big extra here is quite a good one, a new, mostly non-screen-specific commentary recorded in 2015 with Anderson being interviewed by Jake Ryan (Suzy's brother Lionel in the film) and Criterion's sleepy Peter Becker, joined at various points (over the phone) by co-writer Roman Coppola, Murray, Norton and Schwartzman. A genuine conversation between talented friends and collaborators, the track offers plenty of detail about the production of the film (including the surprisingly extensive use of CGI in the film, the quirky technology used in capturing the action and theories on acting) with genuine insight, rather than just remembrances. Like Anderson's films, the commentary's feel is as important as the content, as the loose construction (which includes a piano performance, American Zoetrope's voicemail system and mailbag questions) combines with Ryan's youthful energy to make for a fun and engaging listen. You can also learn the identity of the owner of the world's largest collection of copies of Bottle Rocket.

"The Making of Moonrise Kingdom" includes four entries on the production of the film, starting with the 17:11 "A la decouverte du tournage de Moonrise Kingdom" (or "Exploring the set of Moonrise Kingdom"). Presented in French by Martin Scali (assistant to Anderson on Fantastic Mr. Fox), this tour of the sets catches several scenes in production, allowing a look at how Anderson works and Norton's expert rock-skipping skills. Scali's narration makes it feel like a classic episode of a French movie magazine show (a factor he himself references) making it the right addition to the set.

"Storyboard Animatics and Narrator Tests" (8:39) has four components of its own, a pair of animatics with scratch dialogue, score and sound effects, for the opening scenes, along with a pair of tests for the role of narrator, as performed by Anderson. These give you a real understanding of how his planning results in his filmmaking. "Auditions" (4:34) offers up a peek at the tapes that got Hayward and Gilman their roles, with a mix of line readings and interviews, as well as clips of audition chats with some of the other kids in the film. It's a bit of a rarity to see footage like this, with child actors just being themselves. Wrapping up this section is the brief "Miniature Flash Flood" (1:38), a peek behind the scenes of one of the film's big set pieces, impressively created on a small scale.

Originally included on the previous Blu-ray in a slightly different form, "Welcome to New Penzance" (4:01) is a bit of promo for the film, hosted by Balaban, in character as the narrator. The tone is light and fun, as the narrator talks about the film and actors in it, explaining the on-set footage being shown. More film promos should be done this way. Also carried over from the earlier disc is "Set Tour with Bill Murray" (2:59), which has a similar feel to "Welcome", as Murray, as himself, similarly talks about the film, the director and the stars, as he wanders around the set. It's pure Murray and quite fun.

"Benjamin Britten's Noye's Fludde" (1:53) is an intriguing display of photos from the first performance of the musical from 1958 in England, and a later performance from 1970 Texas (featuring a young Anderson.) It's hard to miss the influences on the film.

It doesn't get more literal than the title of the next supplement, "Eleven iPhone Videos by Edward Norton." Following an intro from Norton, where he explains why he shot home movies, why he's sharing them and the reason behind their 8mm look, the clips (20:48) give you a look around the set during the production of the film from the actor's perspective (along with the scene at the film's big premiere.) Among the more interesting elements revealed is the utter monotony of a film set between takes, resulting in a star-powered game of Scrabble and a discussion of Halle Berry's teeth, even more reasons to love McDormand, and an extended look at Anderson directing Willis during a key scene.

"Animated Books" (4:14) brings back our narrator friend for another promo, this time with animated readings from Suzy's books from the film (by Hayward), each done in a different art style. Just more artistry to enjoy.

Wrapping up the disc, in addition to the film's actual theatrical trailer (1:52), is "Cousin Ben" (2:03), another fun, unique promo, starring Schwartzman, in character, as he unreels the film for some Khaki Scouts.

(Missing from the previous release is a short EPK piece that really wasn't needed either way.)

In the pocket of the digipak is a delightful selection of odds and ends, including replicas from the film, like the excellently reproduced flyer for the Britten musical, a gorgeous map of New Penzance Island and the surrounding areas and an old-school postcard of the cast. As usual, there's a booklet, this time painstakingly designed to look like the magazine Ward reads in the movie. In addition to the traditional cast, credits and technical info about the film, and images of books and badges seen in the film, the booklet includes a cut-down essay from the New York Review of Books by Geoffrey O'Brien and five short (some not positive) responses to the film from young viewers. Though O'Brien's perspective is valued, the kids are a touch more interesting to read, simply because they are so authentic. 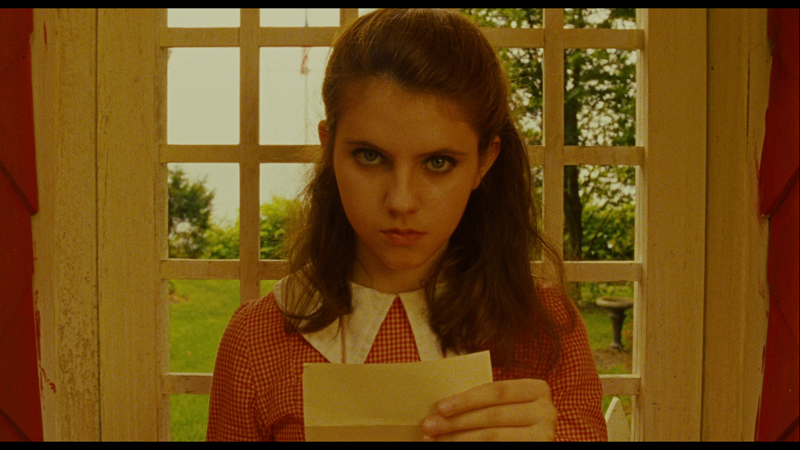 The Bottom Line
Once again, Criterion meets Anderson on his level, matching his brilliant story of young love with another exemplary set loaded with quality that goes beyond the disc itself. The most well-rounded of Anderson's canon, Moonrise Kingdom offers a little of everything, all wrapped up in a stunning display of his exquisite signature style, while the disc looks and sounds terrific and the supplements and bonus inserts make for a satisfying package for any fan to enjoy. After waiting a few years, the faithful should get a copy immediately.